Yves here. Although the reinforcement of the neoliberal frame (“consumers” as opposed to “citizens”) is irritating, this study of the impact of stimulus payments debunks the idea that helping the poors makes them lazy.

A major component of the 27 March CARES Act in the US was a one-time transfer to all qualifying adults of up to $1200, with $500 per additional child. Using a large-scale survey of US consumers, this column studies how these large transfers affected individuals’ consumption, saving and labour supply decisions. Most respondents report that they primarily saved or paid down debts with their transfers, with only about 15% reporting that they mostly spent it. On average, individuals report having spent or planning to spend only around 40% of the total transfer. The payments appear to have had no meaningful effect on labour-supply decisions from these transfer payments, except for 20% of the unemployed who report that the stimulus payment made them search harder for a job.

Amidst the rising spread of COVID-19 and the pervasive imposition of lockdowns in March 2020, the US Federal government passed the CARES Act on 27 March 2020. This stimulus package was exceptional both in its size (over $2 trillion in allocated funds) and in the speed at which it was legislated and implemented. A major component was a one-time transfer to all qualifying adults of up to $1200, with $500 per additional child. Model-based estimates suggest that the fiscal multiplier might be as high as 2, but so far little is known how household consumption responded to the fiscal transfer (Bayer et al. 2020). While the 2001 and 2008 fiscal stimulus payments provide some guidance (Shapiro and Slemrod 2003, Agarwal et al. 2003, Johnson et al. 2006, Parker 2011), the unprecedented nature of the COVID-19 shock, the associated uncertainty about the length and severity of the pandemic, and the widespread prevalence of lockdowns which restrict in-person shopping make it ex-ante unclear how individuals used their payments.

Using a large-scale survey of US households, in Coibion et al. (2020) we document that only 15% of recipients of this transfer say that they spent (or planned to spend) most of their transfer payment, with the large majority of respondents saying instead that they either mostly saved it (33%) or used it to pay down debt (52%). When asked to provide a quantitative breakdown of how they used their cheques, US households report having spent approximately 40% of their cheques on average, with about 30% of the average cheque being saved and the remaining 30% being used to pay down debt. Little of the spending went to hard-hit industries selling large durable goods (cars, appliances, etc.). Instead, most of the spending went to food, beauty, and other non-durable consumer products that had already seen large spikes in spending even before the stimulus package was passed because of hoarding.

Effects of Stimulus Payments on Behaviour

We report in Table 1 the response of households to the qualitative question of how they used their stimulus payment: mostly spent, mostly saved, or mostly to pay off debt.

Table 1 Distribution for the use of stimulus payment, qualitative.

Notes: the table reports the distribution of qualitative responses for the use of stimulus payment.

Column 1 focuses on the 90% of households in the survey who have already received their payment. Only 15% report that they mostly spent their transfer, even lower than the corresponding values found after the 2001 and 2008 transfers. One third report that they primarily saved the stimulus money, leaving over half of respondents answering that they primarily used the Treasury transfers to pay off debt. Column 2 presents equivalent shares for survey participants who anticipate receiving a cheque but have not received one yet. They report very similar plans to those who have already received their payments: only 12% plan to mostly spend it while more than half plan to use it primarily to pay off debt. Even those who do not qualify for a stimulus payment report similar answers when asked hypothetically what they would do if they received $1,000 from the Federal government: 14% report that they would primarily spend the money. However, a larger share of these individuals report that they would save the money rather than pay off debts, likely reflecting the fact that most of those who are ineligible for stimulus payments are higher-income and are less likely to be constrained by debt levels. Jointly, these qualitative responses suggest that the stimulus payments had only limited effects on spending.

In addition to qualitative questions, the survey asked participants to assign specific dollar values to different ways they used (or would use) their stimulus payments, including saving, paying off debt and different categories of spending. On average, households report having spent approximately 40% of their stimulus cheques, with the remaining 60% split almost evenly between saving (27% of stimulus) and paying off debts (31% of stimulus). Relatively little of the spending went to large durable goods or medical care (7% and 6%, respectively). Instead, most of the spending was on food and personal care products (16%) or other consumer products (13%).

Figure 1 shows heterogeneity in marginal propensities arises to most categories of using stimulus funds. For example, a little over 20% of respondents saved all of their stimulus cheques while over 60% saved none. Similarly, ≈15% of individuals reported that they had used all of their payment on paying down debt, while nearly 60% used none at all for this purpose. Spending categories are similarly dispersed: almost 90% report that they spent none of their stimulus payment on large durable goods, and 20% claim that they did not spend any extra money on medical care or other consumer goods. 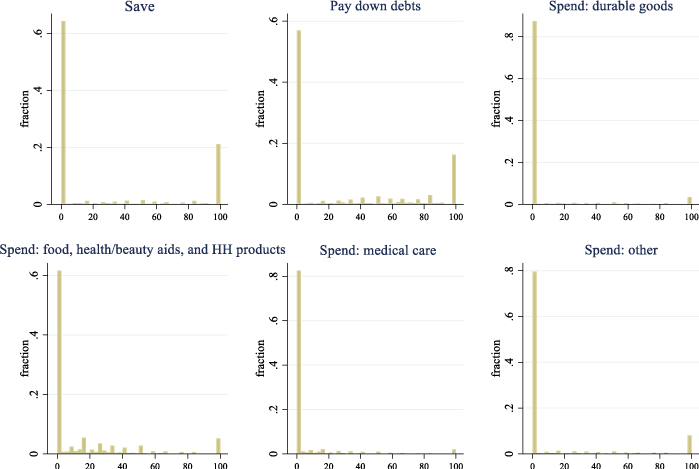 Notes: each panel in the figure reports the distribution for the share of stimulus payment used for saving, paying off debts, and consumer spending.

Another source of economically large differences is liquidity constrains. Constrained households spend 10% more than unconstrained ones, which is allocated mostly to additional spending on food/beauty/personal products and medical care. We also see that those who lost earnings due to the COVID pandemic use about 5% more of the stimulus to pay off debt and 4% less to increase savings, and also spend relatively more on medical care but less on other consumer products, suggesting that their lost earnings were preventing them from getting all the medical services that they needed. We find little role for individuals’ macroeconomic expectations.

Respondents were also asked about how stimulus affected (or would affect) their labour supply decisions. The vast majority (90%) of the employed report that it had no effect on their labour supply decision. About two-thirds of those that are unemployed reported that it had no effect on their job search decision, while over 20% report that the stimulus cheque led them to search harder for a job. In short, we find evidence that some unemployed workers increase their job search effort in response to stimulus payments but otherwise find no meaningful evidence of labour supply effects from the CARES Act one-time transfers.

Sending money directly to households has been one of the main components of US stimulus packages in the last three recessions. We provide some of the first estimates for transfers to US households put in place under the CARES Act. US households only spent around 40% of their stimulus payments but there is significant heterogeneity in terms of how different individuals respond. Many spent their entire stimulus payment, and just as many saved their entire cheque or used it to pay off debt.