Lambert here: A turn-up for the books on open borders….

Top incomes have grown rapidly in recent decades and this growth has sparked a debate about rising inequality in Western societies. This column combines data from UK tax records with new information on migrant status to show that that migrants are highly represented at the top of the UK’s income distribution. Indeed, migration can account for the majority of top-income growth in the past two decades and can help explain why the UK has experienced an outsized increase in top incomes.

It is a well-documented fact that top-income growth has been particularly stark in English-speaking countries, with incomes of the top 1% and 0.1% rising sharply over recent decades (Atkinson et al. 2011, Blanchet et al. 2019). Some scholars have argued that the shared economic and political institutions of these countries, such as lower top marginal tax rates and light touch regulation, have incentivised rent-seeking behaviour among their top earners (Piketty et al. 2011, Bivens and Mishel 2013). In addition, technical changes may have created ‘winner-takes-all’ markets where a few workers earn most of the returns. Recent technological innovations may thus have contributed to the rise of top incomes (Rosen 1981, Kaplan and Rauh 2013, Koenig 2020).

Another characteristic feature of Anglo-Saxon countries is their popularity as a destination for high-skilled migrants, particularly the cities that serve as global services hubs such as London and New York (Kerr et al. 2016, Kerr and Kerr 2018, Roarch et al. 2019). Anecdotal evidence suggests that the rich and famous are internationally mobile and favour these destinations, but this evidence is based on a few highly visible cases. So far, we know little about the magnitude of these effects and the extent to which migration-induced selection effects could drive different trends in income inequality across countries and periods.

In a new paper (Advani et al. 2020), we combine top-income records from UK tax records with new information about migrant status to analyse the link. Tax records have been instrumental in recent research on top incomes. These data provide improved coverage of the highest incomes (reviewed in Atkinson et al. 2011); however, the data include minimal information on demographic characteristics. As a result, it has been difficult for researchers to distinguish native workers from migrant workers at the top of the income distribution, or to assess the impact of migration between countries on income dynamics. We derive information on migrant status from the structure of Social Security numbers assigned to migrant workers on arrival.

The inflow of high-income migrants can also help in understanding recent trends in top incomes. In the UK, an inflow of high-income finance workers can account for much of the observed rise in top-income shares over the past two decades. Immigrants make up more than a quarter of the top percentiles’ income share, up from 18% in 1997. Over these two decades, the importance of migrants thus increased by 50%, which accounts for about 85% of the rise in top income over this period (Figure 1a).

The impact of migration is even starker at higher income levels. Among the top 0.1% and 0.01% top, migrants make up roughly a third of UK top incomes (Figure 1a). This pattern aligns closely with the observed expansion of the wage distribution at the top. Incomes in the very top fractiles of the income distribution have grown the fastest in recent decades, pulling away even from the rapidly growing incomes in the lower end of the top 1%. The data suggest that differential migration rates can rationalise this ‘fractal inequality’. The inflow of migrants into the top 0.01% was nearly twice as large as the comparable inflow into the top 1% over the past two decades. Hence, differential migration rates may have increased the gap between the incomes of the top 1% and the top 0.1% (Figure 1b).

Figure 1a Percent of top incomes earned by migrants 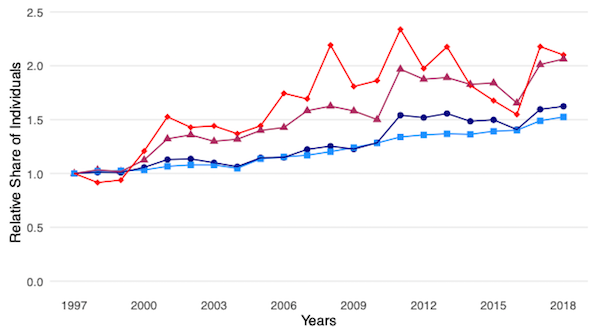 Looking at the main drivers of top earner migration, the results show that migration patterns are closely linked to the rise of finance. Banking, financial support services, and hedge funds together employ about a quarter of migrants in the top 1% (Table 1). The research evaluates which industries rely most on foreign talent and define the dependency ratio as the share of top paid individuals – with incomes among the top 1% of the UK income distribution – who are immigrants. A high-profile case is professional sports – among sports clubs, the dependency ratio is about 31%, meaning that three in ten top-paid workers are from abroad. In the three finance-related industries mentioned above, the dependency ranges from 35% to 40%, which is higher than in sports clubs and substantially above the 24% dependence in the average economy.

Table 1 What industries do top 1% migrants work in?

The migration of ‘global elites’ such as Lakshmi Mittal and Roman Abramovich to the UK has shaped a public perception that London is where the rich come to park their money. A natural question is: What role does this group of rentiers, who mainly receive investment income, play in driving the rise of top incomes? The results show that migration of rentiers had a small impact on the top UK income figures. Splitting top incomes into incomes from earnings and incomes from investments shows that investment incomes have remained nearly unchanged throughout the sample period and that earned incomes are the primary driver of the findings (Figure 2). A prominent public policy concern is how easily similar native workers could replace migrant workers. While the research does not present direct causal evidence on the ease of substitution between natives and migrant workers, the results suggest that migrants are highly positively selected compared to the pool of similar natives. A first set of results shows that migrants reach top incomes at significantly younger ages than natives. The median age for natives who joined the 1% in 2017 was 47, and the distribution is roughly symmetric around that (Figure 3); the median age of migrants entering the 1% was 42, with the distribution skewed to the right. A second indicator is that migrants are increasingly represented at higher income levels. On average, a migrant in the top 1% has an 8% higher income than a native in the top 1%. Finally, the results show that firms poach highly paid, mid-career workers from abroad and place them straight into top paid positions. This poaching is far more common than cases of firms hiring UK trained foreigners who reach top paid ranks later in life. All of this points to an essential role for foreign specialist expertise in the UK economy.

Figure 3 Age at time of entry into top 1% 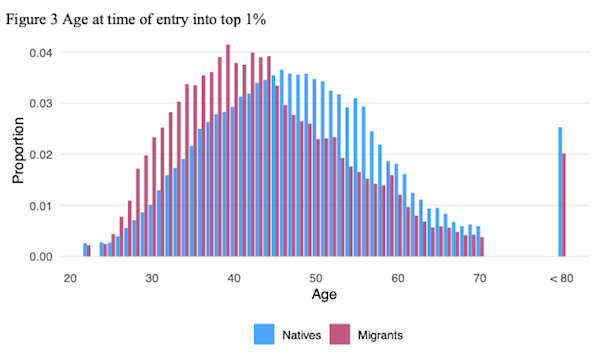 Most explanations of top incomes focus on income inequality among a fixed pool of workers, and in this framework, it has been difficult to quantitatively match the large top income shift observed in the data (Gabaix et al. 2016). By bringing migration into the picture, we highlight that the top 1% of people are not a fixed population, and that migration can amplify top-income growth. In the UK, migration can account for the majority of top-income growth in the past two decades and can help explain why the UK has experienced an outsized increase in top incomes.