Yves here. Sadly, data from past pandemics indicate that the rise in inequality seen so far is likely to be sustained.

The relationship between pandemics and inequality is of significant interest at the moment. The Black Death in the 14th century is one salient example of a pandemic which dramatically decreased wealth inequality, but this column argues that the Black Death is exceptional in this respect. Pandemics in subsequent centuries have failed to significantly reduce inequality, due to different institutional environments and labour market effects. This evidence suggests that inequality and poverty are likely to increase in the aftermath of the Covid-19 crisis.

There is growing concern about the possible distributive consequences of the ongoing Covid-19 pandemic, which has prompted many to look at past experiences for insights. After all, recent studies of long-term tendencies in wealth and income inequality have underlined the role played by major pandemics (Alfani 2020a, 2020b). Much of this literature has focused mostly on the 14th century Black Death, the terrible plague that killed about half the population of Europe and the Mediterranean and which is well-known to have had major economic consequences (Campbell 2016, Alfani and Murphy 2017, Alfani 2020c, Jedwab et al. 2020), including on the distribution of income and wealth. Based on the example of the Black Death, the view that pandemics had the power to (brutally) level inequality has become quite widespread (Milanovic 2016, Scheidel 2017). However, if we take into account subsequent episodes – from the early modern plagues to the cholera pandemics of the 19th century, and beyond – we must recognise the exceptional character of the Black Death, as later pandemics proved unable to lead to such a substantial and long-lasting reduction in economic inequality (Alfani 2020b). In contrast, for the most recent episodes like the Spanish Flu of 1918-1919 there is some evidence that instead of declining, inequality actually increased.

The exceptional character of the 1347-1352 Black Death is clear if we look at the available series of wealth inequality in the long run. Figure 1 shows the case of Italy, for which we have particularly good data. During the five centuries covered by the figure (1300 to 1800), the Black Death seems to have triggered the only phase of systematic decline in wealth inequality (although if the analysis is pushed into the 19th and 20th century we find another, associated to the World Wars (Piketty 2014, Scheidel 2017). In the aftermath of the Black Death, the richest 10% of the population lost their grip on between 15% and 20% of overall wealth. This decline in inequality was long-lasting, as wealth concentration did not reach the pre-Black Death level again before the second half of the 17th century. There were two main causes of the reduction in inequality. 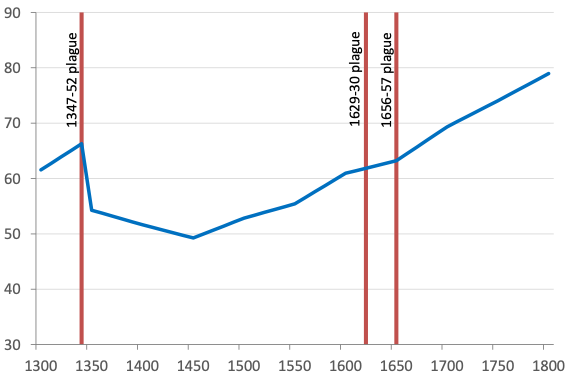 Source: elaboration based on Alfani (2020a)

We have a growing amount of evidence that the same pattern of redistribution found for Italy also involved other European areas, like France, Germany, and the Low Countries. However, the egalitarian effects of the medieval Black Death were not replicated after later large-scale plagues. Consider for example the 17th century plagues that affected southern Europe in a particularly severe way. In Italy, the plague of 1629-1630 which spread to the North and Tuscany and that of 1656-1657 that affected the central and southern parts of the Peninsula (bar for Tuscany) were characterised by mortality rates of between 30% and 40%, fairly close to the 50% or so estimated for the Black Death (Alfani 2013). But on this occasion, inequality reduction was extremely limited: it is entirely invisible in the overall tendencies shown in Figure 1, and even when we look at local dynamics it is almost undetectable based on the available historical documentation. This is probably because of the very different institutional frameworks in place at the onset of these latter pandemics. In particular, during the centuries following the Black Death, when it had become clear that plague was to remain a recurrent scourge, the richest families began to protect their patrimonies from unwanted fragmentation by using institutions, like the fideicommissum (entail), which allowed testators to derogate from the general rule of partible inheritance. This interrupted one of the key mechanisms through which plague might have reduced wealth inequality.

But there is more. After the 17th century plagues we see no trace of an increase in real wages, either in Italy or in other severely affected European areas, like Spain. If we compare this period to that of the Black Death the difference in the trends is quite stark, as can be noticed in Figure 2. In particular, Panel B singles out the cases of Milan in northern Italy, where the 1630 plague killed over 46% of the population, and of Valencia in eastern Spain, where the 1647-1648 plague led to an overall mortality rate of over 30%. The time series of local real wages of unskilled workers do not show any tendency towards an increase, which confirms the inability of these epidemics to cause a Black Death-style levelling.

A) Real wages and the Black Death 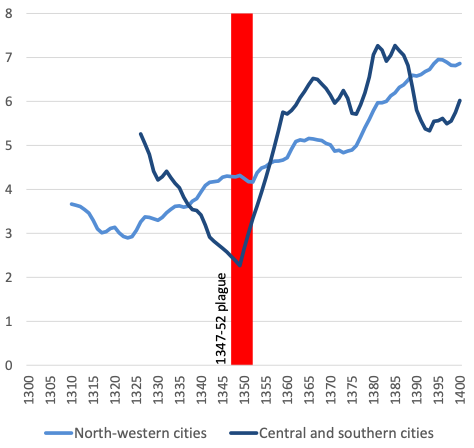 B) Real wages and the plagues of the 17th century 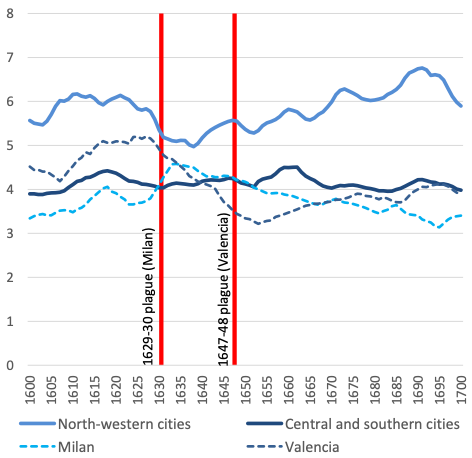 The diverse long-term outcomes, in terms of inequality, of the 14th century Black Death and of the 17th century plagues suggest the need for caution when generalising historical evidence related to specific episodes – as not even epidemics caused by the same pathogen and having similar epidemiological characteristics necessarily have the same economic effects. Things become even more complicated when comparing crises triggered by different pathogens. Nevertheless, we can glimpse some possible redistributive consequences of the main global pandemic threat of the 19th century, cholera, at least for those countries – like France – for which trends in wealth inequality have been researched thoroughly (Piketty et al. 2006, 2014; Piketty 2014).

These data have to be interpreted very conservatively, as for most of the period we have only one observation every ten years, starting in 1807. However, they do allow us to highlight another possible mechanism through which large-scale pandemics of the past might have reduced inequality: the extermination of the poor. Because its spread is favoured by unhealthy and crowded living conditions, cholera affected the poorest groups much worse than all other strata, especially in cities, thus it tended to curtail the lower part of the distribution – which would have led to a reduction in inequality among the survivors even in the absence of any other distributive effect (Alfani 2020b). 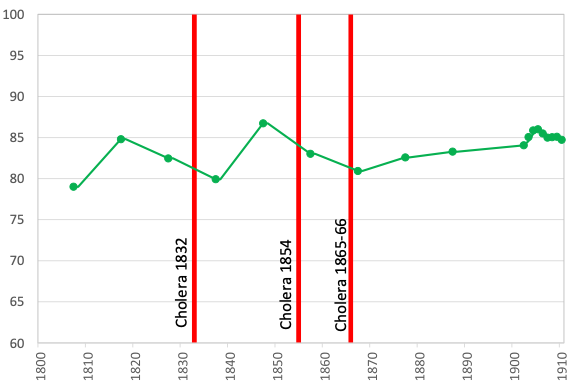 Source: Alfani (2020b), based on data from WID (World Wealth and Income Database).

Together, the cases of cholera and plague allow us to highlight an important point: apart from the initial conditions, the overall mortality rates and the structure of mortality also play a crucial role in determining the redistributive effects of an epidemic. The 17th century plagues, while they had a limited impact upon overall inequality as measured by a Gini index or by the wealth share of the richest, nevertheless were able to cause some reduction in the prevalence of poverty, but this was simply because they tended to exterminate the poor, just as, centuries later, also cholera would do (Alfani 2020b). The medieval Black Death had major consequences on the labour market, but this was because it led to horrifically high mortality rates. In the case of other events, such as the Spanish Flu of 1918-1819, that may claim a high number of victims but through much lower mortality rates (0.25-0.5% in the case of the Spanish Flu: Johnson and Mueller 2002), factors like the contraction of the labour force simply do not operate in the same way, and their distributive consequences are easily overcome by those of other factors.

This is relevant to our understanding of the possible distributive effects of Covid-19, which from the epidemiological point of view is surely more similar to the Spanish Flu than to the Black Death. While studies of the impact on inequality of the Spanish Flu remain rare, we have some evidence that it led to increases in income inequality, for example in Italy (Galletta and Giommoni 2020), mostly because the associated economic crisis led to unemployment and to income loss especially for the poorest and more economically fragile population. Indeed, a striking study of Sweden estimates that for every death caused by the Spanish Flu, there were four new poor people who had to ask for public help at poorhouses (Karlsson et al. 2014). Also in the case of Covid-19, much concern has been expressed about rapidly growing unemployment, especially among the poorest, not only due to the pandemic itself (e.g. job loss for infected people or for those who will long suffer poor health as a consequence of the infection) but also as a result of the containment policies (like lockdowns of various kinds) that have been applied worldwide (OECD 2020).

What the historical experience of the last seven centuries seems to suggest is that in the case of this specific pandemic, the mechanisms leading to an increase of inequality and poverty in the aftermath of the crisis will prevail. From a certain point of view, this is good news because it comes from the fact that the final mortality caused by Covid-19 will be orders of magnitude lower than that associated to levelling catastrophes like the Black Death. But from another point of view, this means that governments worldwide need to be prepared to manage, and possibly to prevent, the social crisis that seems sure to follow the current health crisis.