Yves here. Thomas Neuburger has taken up the INET post we featured over the weekend on their recommended approach to tacking the Covid crisis, which includes lockdowns and extensive testing, accompanied by income support and subsidies. This is consistent with an observation that we made early on: the virus is in charge. Focusing on the economy rather than the disease was bound to fail.

The sometimes energetic discussion in comments included objections to the authors’ claims that strict lockdowns of 4-6 weeks would get it down to levels where it could be kept in check by more targeted controls, as Hong Kong and South Korea have demonstrated: contact tracing, testing, and quarantines of potentially infected individuals. That included providing food and medicines, and if they could not isolate in their current housing, an apartment.

Some disputed the claim that strict lockdowns took longer than 4-6 weeks to tamp Covid down once it had achieved the “community spread” level of contagion. The example of China shows otherwise. Even with their experience with SARS, it took China a bit of time to recognize the severity of the contagion, decide what to do about it and organize its responses.

I suggest reading the entire presentation by the chief scientist who managed the campaign in Wuhan. Here is the key slide, on page 11: 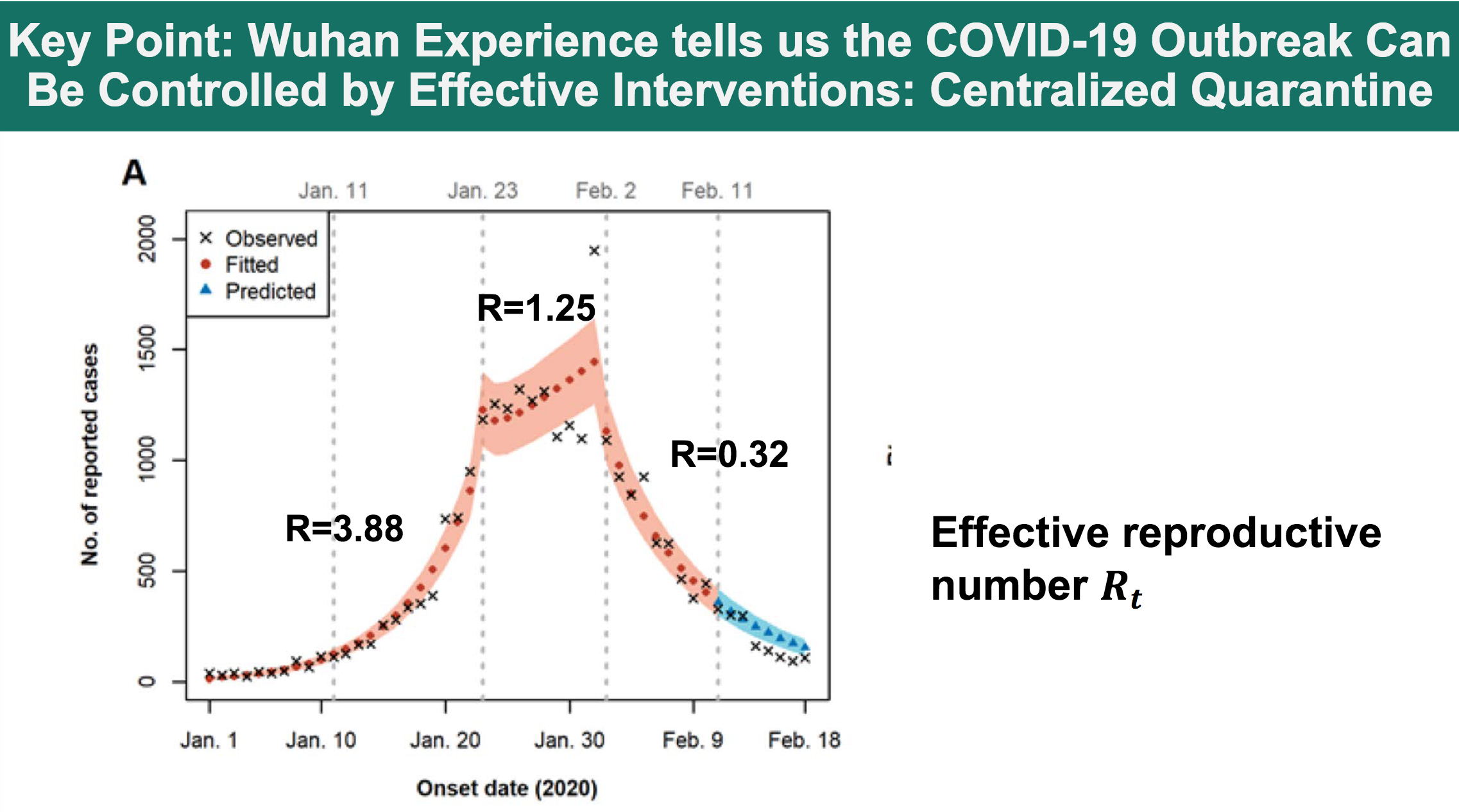 Through Jan 20, China had not launched any serious containment measures. China tried a light lockdown from Jan 23 to the end of January. When they figured that wasn’t sufficient, they went to full lockdown with mandatory quarantine of positive cases away from family on February first. The virus was more or less suppressed by February 18, less than three weeks later.

They continued the lockdown of the area as they slowly relaxed, and squashed a few minor flare-ups over the next couple of months, but the rest of China was already starting to slowly go back into production by the middle of March.

So the question isn’t that a very hard lockdown does not work. The part where China (and other countries) succeeded and the West has largely failed is how to exit the lockdown, as in how quickly to relax the most severe restrictions and what measures need to continue. I can’t comment on Europe, but the US is completely unwilling to put teeth in individual quarantines (as well as provide the needed income and logistical support), and Americans are very capable of rationalizing going to the grocery store as quarantine-compliant.

That then leads to debates that lockdowns “can’t” work in the West. No, they can work. Whether a strict lockdown contains the disease isn’t the issue. It’s that things have yet to get bad enough that Western countries are willing to use the carrots and sticks needed to make them succeed. It’s no different than building a tunnel under a river. Whether the tunnel can be built is a matter of engineering. Here, we have readers offering justifications that the equivalent of “But it’s too expensive!” or “The tunnel will offend the local spirits.”

To put it another way, it’s as if Western countries are collectively failing the marshmallow test.

Or as reader Norseman observed:

Since the rebuttal graphs cited Australia (where I live), I have a dog in the fight. I observe that successful lockdowns here are accompanied by Government, community and non-profit support at most levels of society, imperfect as it was. Despite some missteps & car wrecks here, that happened well enough, plus most people in Australia are practical & support practical efforts given a good explanation. The energy went into fixing it. Can do!

I contrast that with the USA which used to have a Can do culture of exceptionalism, but as the comments here show blindingly clearly, the social energy is going into a thousand different stupid arguments as to why things can’t work, or didn’t really work anywhere else supposedly.

If I was in the US, I’d be taking a long hard look in the mirror, not wasting energy arguing like a kid who has not done his homework.

Thanks to partisan politics, neoliberal Democrats & libertarian Republicans, the whole country has to choose between: • Staying open to survive economically • Shutting down to survive biologically

That was always a false choice driven by putting austerity economics (“mustn’t give too much to the undeserving”) ahead of people’s health and well-being.

One could do both, preserve the economy and preserve people’s health, but only by mandating virus control first, then compensating people for the cost. The government could always ensure people’s biologic survival with enforced mask-wearing and lockdowns, plus free treatment and other measures, and also ensure their economic survival with direct public spending that puts money in the pockets of workers it orders not to work.

The problem is that the neoliberals who run the Democratic Party and the libertarians who control much of Republican decision-making have combined to offer the nation an impossible choice — “Your livelihood or your life. You can only save one.”

In reality, the choice isn’t saving one or the other — it’s saving both or neither. And choosing both starts with saving lives.

The Only Way to Save the Economy

Here’s part of the report. The first point to consider is that lockdowns do work:

Lockdowns Work With over ten months of data from dozens of coronavirus hotspots around the world, statements proclaiming the futility of lockdowns are now provably false. Strict lockdowns do work, and they work swiftly, within 4-6 weeks. They worked not only to suppress, but to virtually eliminate the virus in Australia, New Zealand, and Iceland, as well as in China, Korea, and Taiwan. Figure 1 below tells the story in one picture of new COVID-19 case counts by country. [emphasis added] 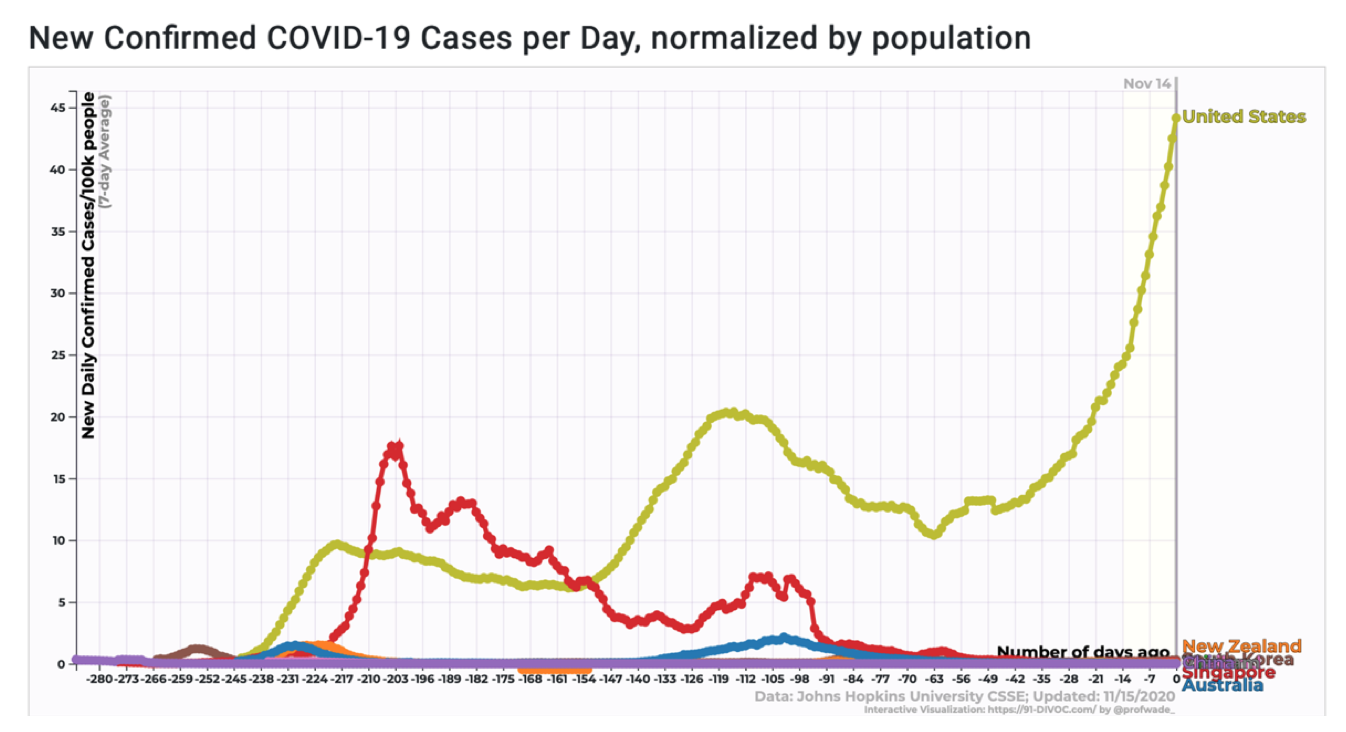 The second point is this: The data shows that attempting to save the economy loses the race to control the virus and further endangers the economy.

Save the Economy by Saving Lives First Limiting economic damage caused by the pandemic starts and ends with controlling the spread of the virus. Dozens of experiments conducted in different countries across the world definitively show that no country can prevent the economic damage without first addressing the pandemic that causes it. The countries that swiftly focused first on pandemic abatement measures are now reopening in stages and growing their economies. Most of the countries that prioritized bolstering their economies and resisted, limited, or prematurely curtailed interventions to control the pandemic are now facing runaway rates of infection and imminent state and national lockdowns. If you still believe that a nation can somehow stimulate and recover the economy without first addressing the pandemic — in other words, trade lives lost to COVID-19 for livelihoods that would otherwise be lost through lockdowns — consider the following chart in Figure 2. It plots the number of coronavirus deaths, a measure of the regional severity of the pandemic, versus the total economic loss, including both the decline in GDP (see end notes on data from EuroStat 11 and OECD 12 GDP Data) and the cost of economic stimulus programs drawn from national budgets and assumed debt (as summarized in this IMF report “Fiscal Policies Database in Response to COVID-19”) by country as of the end of Q2 2020. The chart is effectively a rough representation of how well each country has protected its citizens versus the total cost of doing so. [emphasis added] 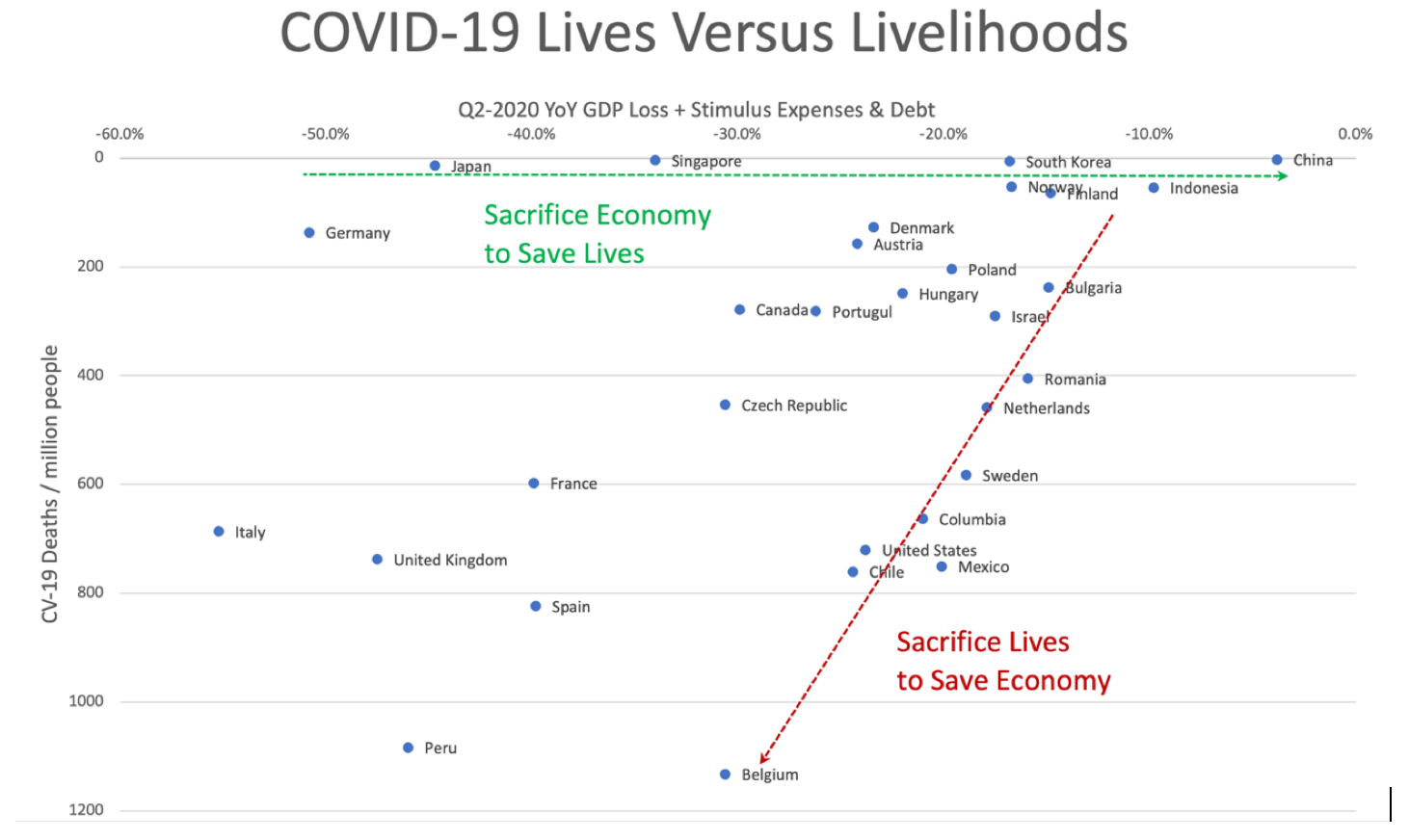 In the chart above, the “origin point” — 0,0 — is at the upper right, not the lower left or somewhere in the middle. The X-axis shows economic loss, with zero loss at the far right (not the far left). Similarly, the Y-axis shows Covid deaths per million people, with zero deaths at the top (not the bottom).

So the nations with the least loss AND the least deaths are clustered in the upper right. Most nations with more deaths (those lower in the chart) also experience more economic loss (further left in the chart). While there are some outliers (Japan, Germany, Singapore) and while the quality of Covid responses and economic responses vary from country to country, the trend is clear. If you attempt to save the economy first (Belgium and the U.K. are two notable examples), you’re going to fail.

Regional Lockdowns (and Travel Restrictions) May Be Needed

One last point. China is an especially instructive case since it’s so large and yet so successful — which leads us to a delicate but important point. Successful Covid response in large countries may require region-by-region lockdowns and travel bans.

The next few months will be difficult for the economically focused countries like the US, where too many states allowed COVID-19 to spread unchallenged. At this point the prevalence is high across the entirety of many states. This means that the local divide-and-conquer approach cannot be effective until those broader regions have the coronavirus under better control. Broad regions require a wider scale lockdown for at least a few weeks, and as seen from the data above, the sooner they start, the quicker their recovery should be, at a correspondingly lower cost. The uncomfortable implication is that effective regional measures and lockdowns implicitly require travel limits and quarantines for those in high prevalence areas in what is effectively a divide-and-conquer strategy. Without these travel restrictions, unaddressed local prevalence becomes state, and then national prevalence over the course of a few weeks as infected people spread the virus from regions of high prevalence. China, Australia, Taiwan, Singapore, South Korea, Vietnam, Thailand, New Zealand, and Iceland all took such measures to bring the coronavirus successfully under control. They used swift response to extensive data, and the national scale-up of testing and tracing along with divide-and-conquer border-control approaches to isolate healthy regions from the virus-ridden. They have all successfully contained and even eliminated the virus domestically and are reopening their economies. The most recent Chinese efforts even focused measures down to the city block scale. The U.S., the U.K. and broader European countries have, so far, failed to respond similarly, and continue to struggle with renewed explosions of exponentially growing community spread. With a coordinated national response that facilitates local focus and swift response to changing coronavirus environments, the US can succeed by following the examples set by successful countries. [emphasis added]

That kind of thinking is anathema to the ginned-up “freedom” crowd. But unless the U.S. is willing toenforce regional lockdowns — and at least consider regional travel bans — this virus and the multi-pronged damage it does will be with us for several years at least.

(I say “ginned-up” because a well-financed portion of the U.S. media is paid to enhance and normalize these extreme reactions. The modern extreme Right electorate would be the size of the John Birch Society without billionaire-financed right-wing media.)

Biden Has a Choice

The report doesn’t mention Joe Biden, but the implication is clear. As president Biden can’t afford to appease his right-wing critics by being half fish and half fowl — he cannot choose some lockdown plus some “freedom.” If he does that, we’ll continually re-infect each other, caught in an endless loop of death and decline, until a safe and trusted vaccine is widely available — which, I must add, is not the same has an effective but massively under-tested vaccine. The former will come much later than the latter. I know doctors who won’t take the first vaccine offered.

The virus, in other words, may well be with us through the 2022 congressional elections — and even into the 2024 presidential race — if Biden isn’t both bold and science-driven.

It’s an interesting problem, given his predilections. For all our sakes, I hope he’s as science-driven as he claims to be.

For those who like my work, I’ve launched a Substack site. You can get more information here and here. If you decide to sign up — it’s free — my thanks to you!