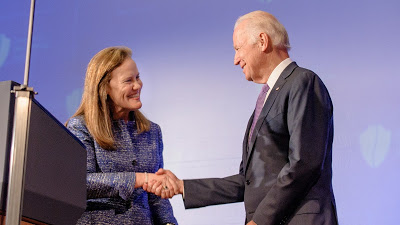 Despite all the focus on domestic and economic matters in the current election, foreign policy, never really discussed, should bear at least equal scrutiny.

Will Biden’s “defense policy” (quotes because America’s defense policy is really a war policy) turn more hawkish than Obama’s, thus reflecting the Hillary wing of that cabinet? Or will Biden continue the “no stupid wars” admonition that kept Obama from initiating bloodbaths in Syria and Iran?

Time will tell, of course, but one of the chief indicators will be his pick for Secretary of Defense, the person who will reflect, influence and implement his foreign policy. On that pick, there’s almost near consensus — Michèle Flournoy. (See here, here, here and here.)

So who is Michèle Flournoy?

Some samples from their article:

• As assistant secretary of defense for strategy under President Bill Clinton, Flournoy was the principal author of the May 1997 Quadrennial Defense Review (QDR), which laid the ideological foundation for the endless wars that followed. Under “Defense Strategy,” the QDR effectively announced that the United States would no longer be bound by the UN charter’s prohibition against the threat or use of military force. It declared that, “when the interests at stake are vital, …we should do whatever it takes to defend them, including, when necessary, the unilateral use of military power.”

The QDR defined U.S. vital interests to include “preventing the emergence of a hostile regional coalition” anywhere on Earth and “ensuring uninhibited access to key markets, energy supplies and strategic resources.”

• In June 2002, as Bush and his gang threatened aggression against Iraq, Flournoy told The Washington Post that the United States would “need to strike preemptively before a crisis erupts to destroy an adversary’s weapons stockpile” before it “could erect defenses to protect those weapons, or simply disperse them.” When Bush unveiled his official “doctrine of preemption” a few months later, Senator Edward Kennedy wisely condemned it as “unilateralism run amok” and “a call for 21st century American imperialism that no other country can or should accept.

• Flournoy’s career has been marked by the unethical spinning of revolving doors between the Pentagon, consulting firms helping businesses procure Pentagon contracts, and military-industrial think tanks like the Center for a New American Security (CNAS), which she co-founded in 2007.

• In 2009, she joined the Obama administration as under secretary of defense for policy, where she helped engineer political and humanitarian disasters in Libya and Syria and a new escalation of the endless war in Afghanistan before resigning in 2012.

• As Obama’s under secretary of defense for policy, she was a hawkish voice for escalation in Afghanistan and war on Libya. She resigned in February 2012, leaving others to clean up the mess. In February 2013, when Obama brought in Chuck Hagel as a relatively dovish reformer to replace Leon Panetta as defense secretary, right-wing figures opposed to his planned reforms, including Paul Wolfowitz and William Kristol, backed Flournoy as a hawkish alternative.

The report was seen as a view of how Clinton’s foreign policy would differ from Obama’s, with calls for higher military spending, arms shipments to Ukraine, renewed military threats against Iran, more aggressive military action in Syria and Iraq, and further increases to domestic oil and gas production — all of which Trump has adopted.

• In 2017, Flournoy and President Barack Obama’s Deputy Secretary of State Antony Blinken founded their own corporate consulting business, WestExec Advisors, where Flournoy continued to cash in on her contacts by helping companies successfully navigate the complex bureaucracy of winning enormous Pentagon contracts.

(Remember that name, Tony Blinken. He’ll turn up again too.)

There’s more in the article, but this should be enough. Michèle Flournoy, as Secretary of Defense, will be the hawk from hell and put a gleam in every war contractor’s eye.

I keep warning that all this killing will come back to us — will blast our malls and movie palaces, our sports arenas and apartment complexes — but warnings like these go well unlistened-to, drowned by the voices of hubris and spread of empire that infuse what passes for minds in the DC world.

I suspect (with no evidence yet) that on the domestic and economic front, the Biden administration will be a centrist-flavored disaster. But if Michèle Flournoy — or anyone like her — is picked for Secretary of Defense, his foreign policy will be even worse, a banquet of blood and a grave risk to us all.

(For those who like my work, I’m launching a Substack site. You can get more information at neuburger.substack.com. If you decide to sign up — it’s free — my thanks to you!)