About the title: Richard Ben Cramer’s What It Takes: The Way to the White House is a famous book in the political class. It’s the story of the 1988 Presidential race, and covers George H.W. Bush, Bob Dole, Dick Gephardt, Joe Biden, Gary Hart, and Michael Dukakis (and not, oddly, Jesse Jackson, which is a bit like writing a book about campaigns 2016 and 2020 without mentioning… Bill? Bud? Barry? Bernie!). Dukakis was the ultimate Democrat nominee, but the book also includes a vivid portrait of Joe Biden. For grins, here’s an example of the famous Biden empathy at work: 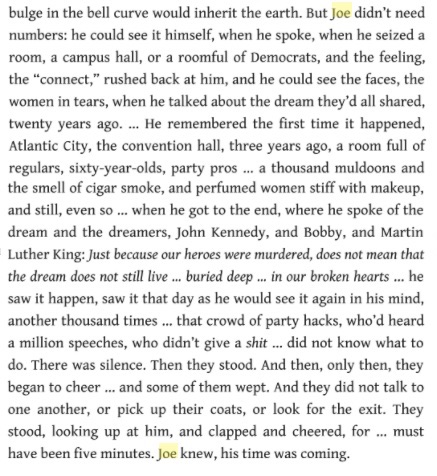 Cramer has a nice, easy style, a little like a Hunter Thompson who never made it past Barstow, and the drugs never began to take hold.

Anyhow, I didn’t come to praise Biden or to bury him. I think American politics changed substantively in the four years since 2016, especially as practiced in and by the Democrat Party. “What It Took” to elect Biden — besides a pandemic — was those changes. I’m about to make a series of claims about those changes, which I hope can serve as what Yves calls a “forcing device” for discussion by the NC commentariat. Now, normally I would festoon my prose with links and a boatload of quotes, but I need to get out of this post alive without writing 20,000 words, and in any case none of these topics will go away. So I’m going to make a lot of bare assertions, and back them up — or abandon them — in comments. There are probably other substantive changes I have missed, but these will do to go on with. Here are my claims. In the years 2016-2020:

2) The PMC was and is embubbled by a domestic psyop.

3) The press replaced reporting with advocacy.

5) “Fascism” became an empty signifier, not an analytical tool.

Let us look at each of these claims.

1) The PMC attained class consciousness. As Thomas Frank has shown (Listen, Liberal!), the PMC has replaced the working class as the Democrat Party base[1]. During the period 2016-2020, the PMC, collectively, experienced Trump’s election as literal, actual trauma (as pain, as an energy suck, as constant stress, as depression, etc. Parents wept to tell their children, and so forth. That the burden of such trauma is — with respect to the post-traumatic stress disorder suffered by, say, soldiers. abuse victims, or the homeless — quite slight may lead some — well, me — to mock it (“How was brunch?”), but the trauma is deeply felt and real). Importantly, as Steve Randy Waldman has urged, the class position — and hence the class consciousness — of the PMC is marked by “predatory precarity“; the predation comes from what a professional must do to maintain their class position in a financialized economy driven by rent-seeking; the precarity comes from the fact that their class position is maintained, not by the ownership of capital, or the inheritance of a title, but by expensive “positional goods” like credentials. Trump’s right-wing populism, with its distrust of experts — the same meritorious experts whose Esq.s were on every foreclosure notice or dunning letter, and whose M.D.s were on every surprise medical bill — struck directly at both exposed nerves. Not only might they not be consulted on how best to rule, their very credentials might turn out to be worthless. Hence the rage, the fear, the hate, certainly universally expressed in the press, but also in such organizations as Indivisible, the Women’s March, etc. The PMC as a class came to consciousness screaming Make it stop!

2) The PMC was and is embubbled by a domestic psyop. Make it stop! was, however, followed hard upon by I didn’t do it! Jonathan Allen and Amie Parnes, in Shattered: Inside Hillary Clinton’s Doomed Campaign, describes how Robbie Mook deployed RussiaGate to delegitimize the newly elected President in a meeting with the rest of the defeated Clinton camp the day after Election Day 2016. RussiaGate became the Goebbelsian propaganda operation that it was — if there had been anything to it, Pelosi would have impeached Trump for it, Mueller Report or no[2] — through an unholy alliance of the Democrat Party apparatus, the intelligence community, and the press. All were variously motivated — “There in stately splendor, far removed from the squalid village below, they fight their petty battles over power and money” (Bob and Ray) — but the effect on the PMC was extraordinary: To this very day, any opposing or dissenting force to the liberal Democrat orthodoxy of the day can be dismissed with a one-liner about Putin! I’ve never seen anything like it.[3] Both (1) and (2) combined to drive turnout, voluntering, donations, and everything else. (That the Democrat base is too slim to rule on its own is another issue entirely.)

After Russiagate imploded, when the Mueller investigation failed to find that Trump was a Russian puppet, Aaron Maté, who was one of the few journalists courageous enough to call bullshit on the whole revolting episode, interviewed his father, psychiatrist Gabor Maté about the psychological mechanisms that enabled Russiagate to damage the many brains that it did. It’s worth listening to in full; it’s humane:

From the transcript, the elder Maté identifies two psychological mechanisms at work:

And like individuals can be in denial, a society can be in denial[4]. So this society is deeply in denial about its own trauma, and particularly in this case about the trauma of that election. So one way to deal with trauma is denial of it. The other way is to project onto other people things that you don’t like about yourself.

Denial, Maté says, is of “of the actual dynamics in American society”; see the discussion of predatory precarity above. That Putin “meddled” in our election — remember the ludicrous Facebook ads? That was the best the Russian demon could do? — is purest projection; America interferes with elections all over the world (and Democrats interfere with them in, say, Iowa or Brooklyn or Florida).

The net effect is that, for the PMC, all must accept RussiaGate as dogma, so their psychological mechanisms of denial and projection remain intact. Honestly, it’s far more virulent than Iraq WMDs, and that was engineered by Bush and Cheney.

3) The press replaced reporting with advocacy. This ground was been well-tilled by Matt Taibbi and Glenn Greenwald. One question: If in fact the Trump campaign was able to produce legitimate affidavits of election fraud, or hacking by insiders of ballot marking devices, tabulating machines, or voter rolls — all of which have not only been shown to be technically feasible, but have been accomplished — do you think the press would report it?

4) Election legitimacy is determined by extra-Constitutional actors.. There are two, both of whom played starring roles in Russiagate. (Note that we have an established process whereby individual states certify election results. There is no structural or Constitutional need for additional, independent actors.) The first legitimizing institution is the press: It “calls” elections. (The next step, also taking place in the press, is a “concession speech” by the losing candidate. None of this has a Constitutional mandate, except as bestowed by the Norms Fairy.) The second legitimizing institution is the intelligence community; if the DHS or the FBI “determined” — no doubt without exposing their sources and methods to public scrutiny, and for the best possible of motives[5] — that an election had been “hacked,” then the press would cover it that way, and it would be; they are the guarantors of the State against foreign contamination. (Fortunately for us all, only the press is playing its legitimizing role in 2020; there is no need for the intelligence community to step in.)

5) “Fascism” became an empty signifier, not an analytical tool. If Trump were really Hitler, Nancy Pelosi wouldn’t have given him a whole new Space Force for a playtoy, wouldn’t have given him more defense money than he asked for, and wouldn’t have rolled over on the Amy Coney Barrett nomination, either. If the Trump administration were a fascist regime, a lot of people would already be in camps; people like Fauci; Pelosi herself; the Sanders wing of the Democrat party down to the organizers, and so on. If you conceive of fascism monolithically, as in the single form of goverment in a single state, we’re nowhere near it; where are the organized paramilitary units? (And please, please, please don’t tell me the Proud Boys are anything like the Freikorps, let alone the Nazi Sturmabteilung. In addition to being heavily infiltrated by informants, they don’t have the scale, they don’t have the skills, and they don’t have the trauma of having lost World War I in the blood and mud of the trenches.) More destructively, classifying Trump as a fascist prevents us from recognizing fascist forms of government organic to the United States itself, as in the Reconstruction South or Jim Crow. Even more destructively, projecting fascism onto Trump enables the Democrat base to deny giving its own frightening thirst for, er, leadership, and its tendency to authoritarian followership, as when entire states in which Biden didn’t even have a campaign office lined up behind him after Obama anointed him as his successor.

Now, I cannot prove that the PMC attaining class consciousness, a domestic psyop, a non-reportorial press, degraded elections, and engineered ignorance about fascism were all sufficient to get Biden elected, but they were all necessary (plus money, of course). And that implies that Biden’s victory over Trump came at a very high price, perhaps a price to high to bear.

The worst of it is that the PMC, the press, the intelligence community, and the Democrat Party have all tasted blood; I don’t see how, even under a Biden Restoration, the PMC or any of these institutions will revert even to their decadent conditions of 2016. In consequence, we have a professional managerial class that is, both in geopolitical terms and the daily cut and thrust of conversation and retail politics, unmoored from reality; flat earthers. And who’s to say what ___Gate will be cooked up next, since the first one worked so well? And if our politics are driven by hate and fear, projection and denial — all strategized and gaslit by well-paid experts, also from the PMC — how does “our democracy” continue to function? I find this a very painful prospect to contemplate.

[1] English, with its “all”, “most”, and “some”, doesn’t do well with sets that have fuzzy edges, and so one has endless discussions of the form “Not all ____ are ___.” True enough, in all cases! Further, “all” and its friends are adjectives, and one can’t build a strong sentence out of adjectives. Hence, one treats “bourgeoisie,” say, as a class with a set membership function of owning capital and buying labor power, but then a mass of other family resemblances come into play that don’t involve ownership and often involve virtues. So, “not all bourgeoisie”! And “not all PMC!” After all, class traitors do exist; Engels ran a factory in Manchester after all. Perhaps if I become a better writer I will figure this out.

[2] Clinton claimed, in debate, that Trump was “a Russian puppet.”

[3] I’m forgetting who characterized Russiagate as “QAnon for people with mortgages.”

[4] I’m not entirely sure that’s not a category error. But in this case, where a collectively is feeling the same things — granted, partly because those things were engineered — I don’t think it is.