Yves here. It’s instructive to see a new angle on the taxonomy of capitalist societies, this one looking at data to tease out the impact of class.

Similar levels of income inequality may coexist with completely different distributions of capital and labor incomes. This column introduces a new measure of compositional inequality, allowing the authors to distinguish between different capitalist societies. The analysis suggests that Latin America and India are rigid ‘class-based’ societies, whereas in most of Western European and North American economies (as well as in Japan and China), the split between capitalists and workers is less sharp and inequality is moderate or low. Nordic countries are ‘class-based’ yet fairly equal. Taiwan and Slovakia are closest to classless and low inequality societies.

Similar levels of income inequality may be characterised by completely different distributions of capital and labour. People who belonged to the highest income decile in the US before WWII received mainly capital incomes, whereas in 2010 people in the highest decile earned both high labour and capital incomes (Piketty 2014). Yet the difference in their total income shares was small.

Different distributions of capital and labour describe different economic systems. Two polar systems are particularly relevant. In classical capitalism – explicit in the writings of Ricardo (1994 [1817]) and Marx (1992 [1867], 1993 [1885]) ¬– a group of people receives incomes entirely from ownership of assets while another group’s income derives entirely from labour. The first group (capitalists) is generally small and rich; the latter (workers) is generally numerous and poor, or at best with middling income levels. The system is characterised by high income inequality.

In today’s liberal capitalism, however, a significant percentage of people receive incomes from both capital and labour (Milanovic 2019). It is still true that the share of one’s income derived from capital increases as we move higher in the income distribution, but very often the rich have both high capital and high labour incomes. While inter-personal income inequality may still be high, inequality in composition of income is much less.

The purpose of our study is to introduce a new way of looking at inequality that allows us to classify empirically different forms of capitalism. In addition to the usual inter-personal income inequality, we look at inequality in the factoral (capital or labour) composition of people’s incomes. The class analysis (where class is defined narrowly depending on the type of income one receives) is thus separated from the analysis of income inequality proper.

By applying this methodology to 47 countries with micro data provided by Luxembourg Income Study from Europe, North America, Oceania, Asia, and Latin America in the last 25 years and covering approximately the 80% of world output, three main empirical findings emerge.

First, classical capitalism tends to be associated with higher income inequality than liberal capitalism (see Figure 1). Although this relationship was implicit in the minds of classical authors like Ricardo and Marx, as well as in recent studies of pre-WWI inequality in countries that are thought to have had strong class divisions (Bartels et al. 2020, Gómes Léon and de Jong 2018), it was never tested empirically. 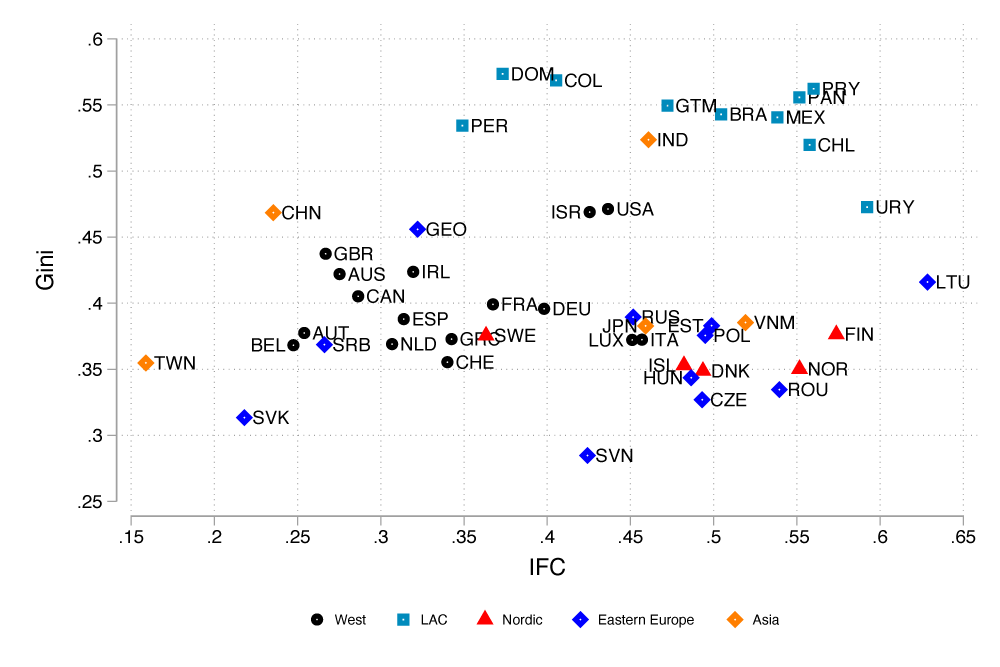 Note: The graph shows on the horizontal axis compositional inequality and on the vertical axis the standard measure of inter-personal income inequality (Gini coefficient). Nordic countries (Finland, Sweden, Norway and Denmark) are marked in red.

Second, three major clusters emerge at the global scale. The first cluster is the one of advanced economies, which includes Western Europe, North America, and Oceania. Relatively low to moderate levels of both income and compositional inequality characterise this cluster. The US and Israel stand somewhat apart from the core countries since they display higher inequality in both dimensions.

Latin American countries represent the second cluster, and are, on average, characterised by high levels in both inequality dimensions.

The third cluster is composed of Nordic countries and is exceptional insofar as it combines low levels of income inequality with high compositional inequality. This is not entirely surprising: Nordic countries are known to combine wage compressions with ‘socially acceptable’ high returns to capital (Moene and Wallerstein 2003, Moene 2016). Such compromise between capital and labour (reached in the early 1930s) has put a cap on earning inequality within the region (Fochesato and Bowles 2015) but has left wealth inequality untouched (Davies et al. 2012). By drastically reducing the progressivity of capital income taxation (Iacono and Palagi 2020), income tax reforms during the 1990s have worked in the same direction.

Several other results are found. Many Eastern European countries are close to the Nordic cluster. Some (Lithuania and Romania) have very high compositional inequality, likely the product of concentrated privatisation of state assets. India is very similar to the Latin American cluster, displaying a class-based structure with high levels of income inequality.

Taiwan and Slovakia are, instead, the most ‘classless’ societies of all. They combine very low levels of income and compositional inequality. This makes them ‘inequality-resistant’ to the increase in the capital share of income. In other words, if capital share continues to rise due to further automation and robotics (Baldwin 2019, Marin 2014), it will not push inter-personal inequality up:  everybody’s income would increase by the same percentage. The link between the functional and personal income distribution in such societies is weak – the topic of a previous VoxEU column by Milanovic (2017b). It is also interesting that Taiwan is both more ‘classless’ and less unequal than China.

The third, and perhaps most striking result that emerges from our analysis is that no one country in our sample occupies the north-west part of the diagram. We find no evidence of countries combining low levels of compositional inequality (like those of Taiwan and Slovakia) with extremely high levels of income inequality (like in Latin America). 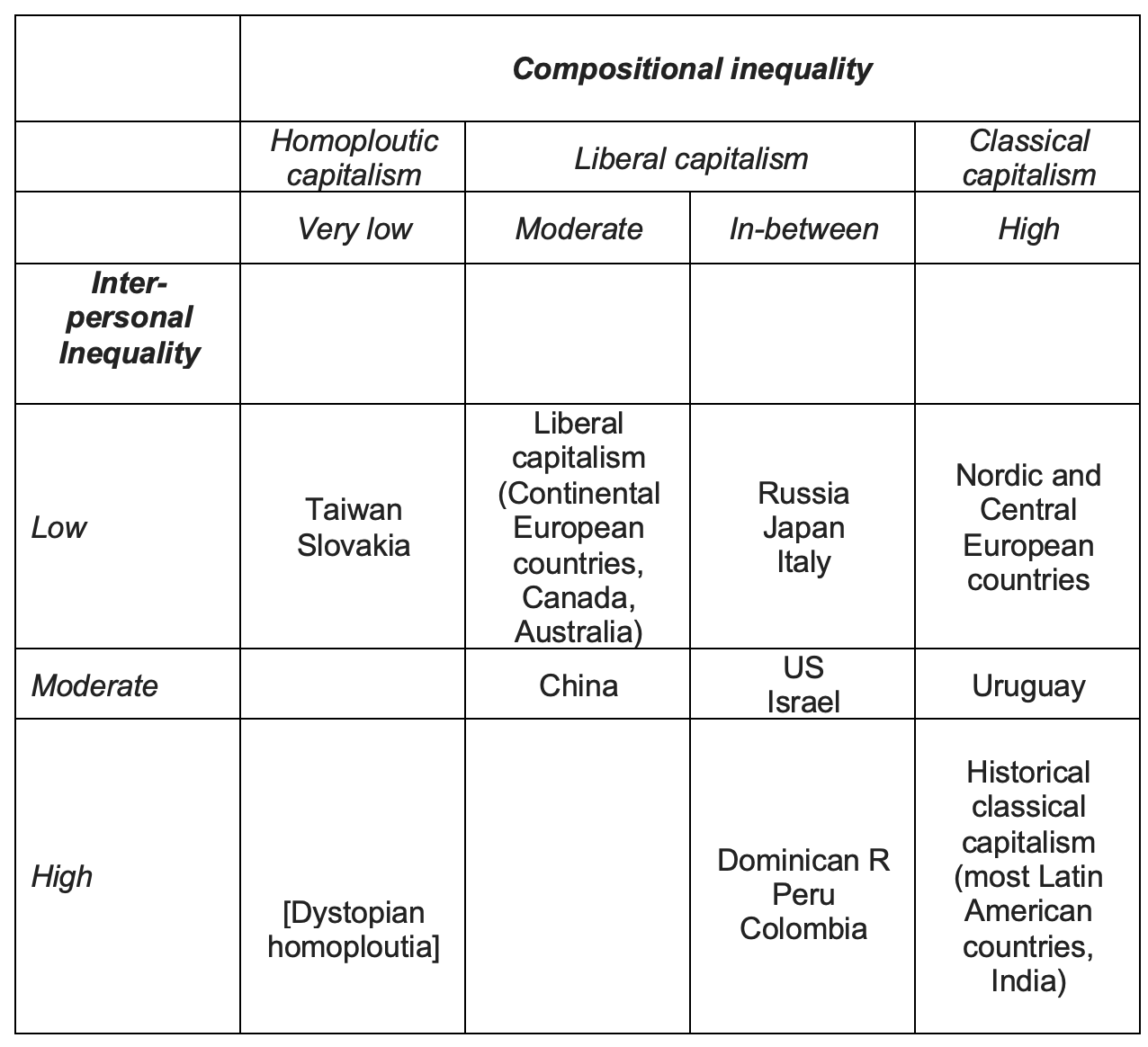