Yves here. While this paper does a good job of compiling and analyzing data about Covid deaths and excess mortality, and speculating about deaths of despair, I find one of its assumptions to be odd. It sees Covid-related deaths of despair as mainly the result of isolation. In the US, I would hazard that economic desperation is likely a significant factor. Think of the people who had successful or at least viable service businesses: hair stylists, personal trainers, caterers, conference organizers. One friend had a very successful business training and rehabbing pro and Olympic athletes. They’ve gone from pretty to very well situated to frantic about how they will get by.

While Mulligan does mention loss of income in passing in the end, it seems the more devastating but harder to measure damage is loss of livelihood, thinking that your way of earning a living might never come back to anything dimly approaching the old normal. Another catastrophic loss would be the possibility of winding up homeless, particularly for those who’d never faced that risk before.

By Casey Mulligan, Professor of Economics, University of Chicago and former Chief Economist of the White House Council of Economic Advisers. Originally published at VoxEU

The spread of COVID-19 in the US has prompted extraordinary steps by individuals and institutions to limit infections. Some worry that ‘the cure is worse than the disease’ and these measures may lead to an increase in deaths of despair. Using data from the US, this column estimates how many non-COVID-19 excess deaths have occurred during the pandemic. Mortality in 2020 significantly exceeds the total of official COVID-19 deaths and a normal number of deaths from other causes. Certain characteristics suggest the excess are deaths of despair. Social isolation may be part of the mechanism that turns a pandemic into a wave of deaths of despair; further studies are needed to show if that is the case and how.

The spread of COVID-19 in the US has prompted extraordinary, although often untested, steps by individuals and institutions to limit infections. Some have worried that ‘the cure is worse than the disease’. Economists Anne Case and Angus Deaton mocked such worries as a “pet theory about the fatal dangers of quarantine”. They concluded in the summer of 2020 that “a wave of deaths of despair is highly unlikely” because, they said, the duration of a pandemic is measured in months whereas the underlying causes of drug abuse and suicide take many years to accumulate (Case and Deaton 2020). With the extraordinary social distancing continuing and mortality data accumulating, now is a good time to estimate the number of deaths of despair and their incidence.

As a theoretical matter, I am not confident that demand and supply conditions were even approximately constant as the country went into a pandemic recession. Take the demand and supply for non-medical opioid use, which before 2020 accounted for the majority of deaths of despair.1 I acknowledge that the correlation between opioid fatalities and the unemployment rate has been only weakly positive (Council of Economic Advisers February 2020, Ruhm 2019). However, in previous recessions, the income of the unemployed and the nation generally fell.

In this recession, personal income increased record amounts while the majority of the unemployed received more income than they did when they were working (Congressional Budget Office 2020).2 Whereas alcohol and drug abuse can occur in isolation, many normal, non-lethal consumption opportunities disappeared as the population socially distanced. Patients suffering pain may have less access to physical therapy during a pandemic.

On the supply side, social distancing may affect the production of safety.3 A person who overdoses on opioids has a better chance of survival if the overdose event is observed contemporaneously by a person nearby who can administer treatment or call paramedics.4 Socially distanced physicians may be more willing to grant opioid prescriptions over the phone rather than insist on an office visit. Although supply interruptions on the southern border may raise the price of heroin and fentanyl, the market may respond by mixing heroin with more fentanyl and other additives that make each consumption episode more dangerous (Mulligan 2020a, Wan and Long 2020).

Mortality is part of the full price of opioid consumption and therefore a breakdown in safety production may by itself reduce the quantity consumed but nonetheless increase mortality per capita as long as the demand for opioids is price inelastic. I emphasise that these theoretical hypotheses about opioid markets in 2020 are not yet tested empirically. My point is that mortality measurement is needed because the potential for extraordinary changes is real.

The Multiple Cause of Death Files (National Center for Health Statistics 1999–2018) contain information from all death certificates in the US and would be especially valuable for measuring causes of mortality in 2020. However, the public 2020 edition of those files is not expected until early 2022. For the time being, my recent study (Mulligan 2020b) used the 2015–2018 files to project the normal number of 2020 deaths, absent a pandemic.

‘Excess deaths’ are defined to be actual deaths minus projected deaths. Included in the projections, and therefore excluded from excess deaths, are some year-over-year increases in drug overdoses because they had been trending up in recent years, especially among working-age men, as illicit fentanyl diffused across the country.

I measure actual COVID-19 deaths and deaths from all causes from a Centres for Disease Control and Prevention (CDC) file for 2020 that begins in week five (the week beginning 26 January 2020) and aggregates to week, sex, and eleven age groups. To minimise underreporting, I only use the data in this file through week 40 (the week ending 3 October). In separate analyses, I also use medical examiner data from Cook County, Illinois, and San Diego County, California, which indicate deaths handled by those offices through September (Cook) or June 2020 (San Diego) and whether opioids were involved, and 12-month moving sums of drug overdoses reported by CDC (2020) through May 2020.

Mortality in 2020 significantly exceeds what would have occurred if official COVID-19 deaths were combined with a normal number of deaths from other causes. The demographic and time patterns of the non-COVID-19 excess deaths (NCEDs) point to deaths of despair rather than an undercount of COVID-19 deaths. The flow of NCEDs increased steadily from March to June and then plateaued. They were disproportionately experienced by working-age men, including men as young as 15 to 24. The chart below, reproduced from Mulligan (2020b), shows these results for men aged 15–54. To compare the weekly timing of their excess deaths to a weekly measure of economic conditions, Figure 1 also includes continued state unemployment claims scaled by a factor of 25,000, shown together with deaths. 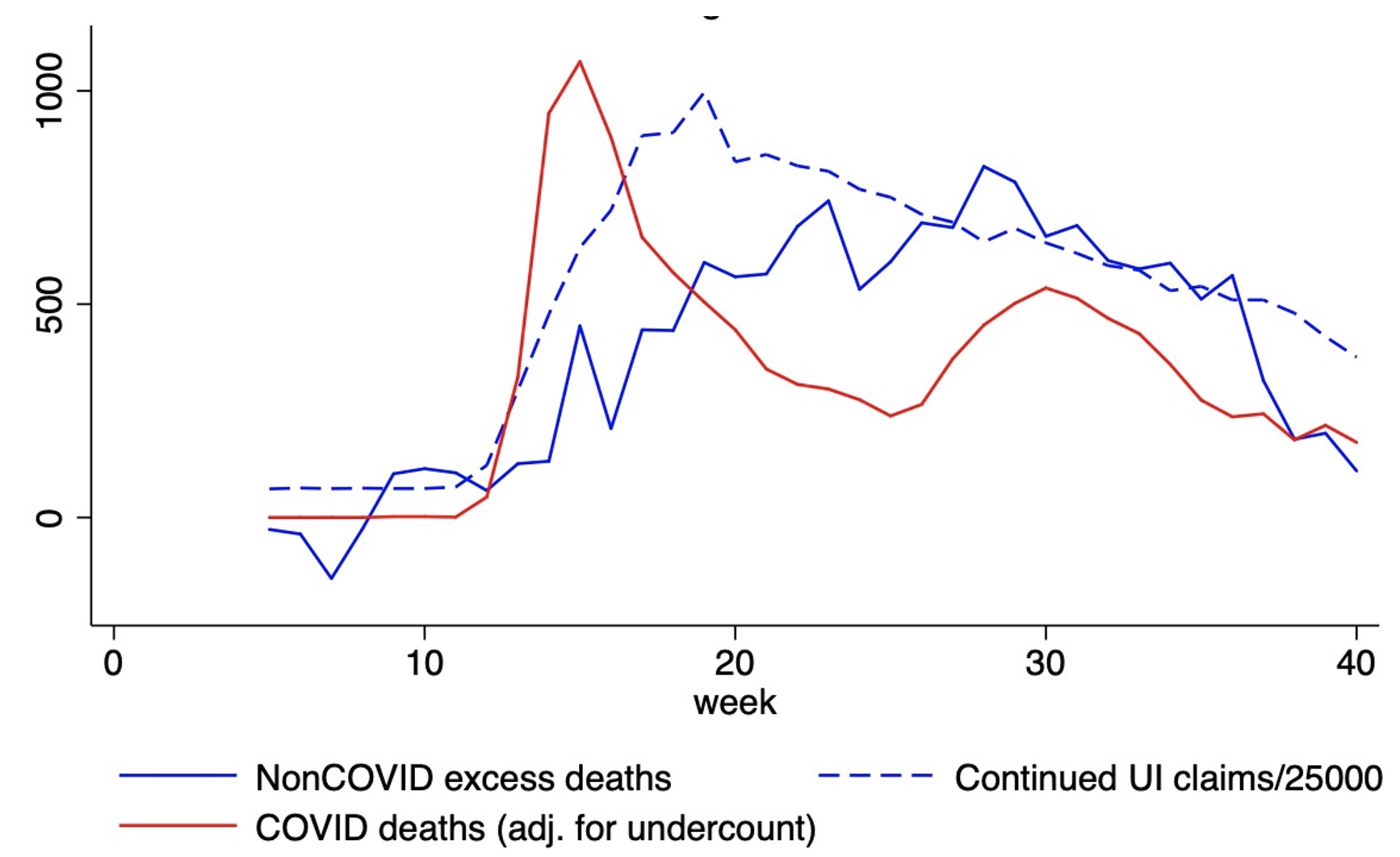 NCEDs are negative for elderly people before March 2020, as they were during the same time of 2019, due to mild flu seasons. Offsetting these negative NCEDs are about 30,000 positive NCEDs for the rest of the year, after accounting for an estimated 17,000 undercount of COVID-19 deaths in March and April.

If deaths of despair were the only causes of death with significant net contributions to NCEDs after February, 30,000 NCEDs would represent at least a 45% increase in deaths of despair from 2018, which itself was high by historical standards. At the same time, I cannot rule out the possibility that other non-COVID-19 causes of death or even a bit of COVID-19 undercounting (beyond my estimates) are contributing to the NCED totals.

One federal and various local measures of mortality from opioid overdose also point to mortality rates during the pandemic that exceed those of late 2019 and early 2020, which themselves exceed the rates for 2017 and 2018. These sources are not precise enough to indicate whether rates of fatal opioid overdose during the pandemic were 10% above the rates from before, 60% above, or somewhere in between.

Presumably, social isolation is part of the mechanism that turns a pandemic into a wave of deaths of despair. However, the results so far do not say how many, if any, come from government stay-at-home orders versus various actions individual households and private businesses have taken to encourage social distancing. The data in this paper do not reveal how many deaths of despair are due to changes in ‘demand’ – such as changes in a person’s income, outlook, or employment situation – versus changes in ‘supply’ – such as the production of safety and a changing composition of dangerous recreational substances.