I apologize abjectly for being a bit short on original posts today, although Lambert has a juicy offering launching later in the day. Service crapification (basically all sorts of what ought to be routine stuff taking tons of extra steps and follow up) is one part of what is competing for my time. The other is all sorts of nonsense, like having to send multiple certified letters to a debt collector hounding my mother over an ambulance charge she already paid to dealing with a neighbor who is trying to stymie us cutting branches of his trees that are in my mother’s yard and threatening her phone/power lines. Fortunately, he’s not as good at this as he thinks he is. But dealing with the problem takes time I don’t have and he by design is making it more of an energy sink. Apartments were so much easier!

Invasive tawny crazy ants have an intense craving for calcium – with implications for their spread in the US PhyOrs (Robert M). WTF, feral hogs, murder hornets, and now this?

Another barnstormer from @CharlesWalkerMP ? whatever your politics listen to this pic.twitter.com/lKuU7rHSPc

Iran and the Coronavirus: From Denial to National Mobilization. A chapter from The Coronavirus in the Middle East: State and Society in a Time of Crisis.

Kids highly likely to transmit coronavirus to others: study MedicalXpress

Escape of SARS-CoV-2 501Y.V2 variants from neutralization by convalescent plasma A hot of the presses preprint from South Africa.

I have avoided the PCR test controversy but it appears that it just isn’t a very good test (or is merely less bad than the antigen test). John Hopkins found it has a 20% false NEGATIVE rate. If you read the abstract, the reasons appear to have nada to do with the # of cycles.

The World Health Organization has now released guidance to laboratories around the world to reduce the cycle count in PCR tests to get a more accurate representation of COVID cases.

The current cycle was much too high and resulting in any particle being declared a positive case.

Covid vaccines may need updating to protect against new variant, study suggests Guardian. Understatement of the year. And operationally like declaring, “Let’s have an Aida matinee.”

Press Secretary Jen Psaki and Dr. Anthony Fauci brief reporters on the Biden administration’s pandemic response and what is known about new more transmissible variants of the coronavirus and how they respond to vaccines. C-SPAN (Kevin C)

Read the National Strategy for the COVID-19 Response and Pandemic Preparedness White House. Hoo boy, the goals and their ordering are not encouraging. Particularly not liking the choice of what was Goal 1, the lack of any clear commitment to financial support (the weasel wording = Scrooge-y means tested, if any), and the continuing emphasis on Magic Covid Vaccines, and not pursuing treatments too:

England’s lockdown fails to suppress rise in Covid transmissions Financial Times. See BMJ: Covid-19: Infections remain high in England with no evidence of decline since lockdown. May point to higher infectiousness of new strain largely offsetting lockdowns. All of the contagion reduction strategies will need to be reworked in a big way in light of the greater contagiousness of Super Covid, but (and maybe I’ve missed it), I’ve seen squat as to what changes are warranted. I’ve bought a big inventory of n95s and even a metalworking mask with filters, but I have no idea what to do beyond that.

The End of the 40-Year War on Government New Republic. With all due respect, what are they smoking? Biden promised nothing fundamental will change. He’s a deficit hawk so anything for the poors will be super means tested. I could go on…

BlackRock’s China challenge a red flag for Biden Asia Times (Kevin W). I can’t get worked up about BlackRock losing its #1 spot in Chinese ETFs to a Chinese fund manager because you’d expect Chinese nationals to dominate trading. But yes, Trump accelerated what was an inevitable process.

The UK refusing to give full diplomatic status the EU's mission in London is baffling at at time when @BorisJohnson is trying to connect with @JoeBiden – because it recalls what Trump administration did to the EU ambassador back in 2019. Stay with me/1https://t.co/W1RYbN8LOs

The militarization of American democracy The Hill (Kevin C). On the one hand, expresses well-warranted concern. But on the other, where were these people when (for instance) 1. The Obama Administration coordinated a 17 city militarized crackdown on Occupy Wall Street, which was not threatening any democratic processes, and was at best a continuing poke in the eye to Big Finance, which was abrogating the long-standing tradition of local control of policing; 2. The NYPD put itself above democratic accountability by having most police attendees turn their back on Mayor de Blasio at a police funeral, because de Blasio had made tame criticisms of the police after one of their bad murders by cop (so many I can’t recall which) and 3. Team Dem happily and eagerly using the intel state to try to overturn the Constitutional change of power, as in take the position that third world style, the military has to sign off on who becomes the President?

The making of US empire at the dawning of its end Pepe Escobar, Asia Times

You Counter Trumpism By Ending The Conditions Which Created It, Not With Authoritarian Policies Caitlin Johnstone (furzy)

“There Is Truth And There Are Lies” David Sirota (Chuck L). Speaking thereof:

‘Did Antifa blow through there?’ TIME cover depicts Biden’s first day in Oval Office ransacked by Trump RT (Kevin W). You need to click through and have a look if you haven’t seen it already.

After Biden, Let Her Run Heisenberg Report. Resilc: “Biden has 3-6 mo to fix vax rollout or he’s dead meat.” Moi: Not sure he has even that much runway, with the Super Covid strains expected to create a contagion blowout by mid-March. That will force even more stringent lockdowns. But if you don’t restrict interstate travel, which only the Feds can do, it’s not clear that even that would be adequate. What happens if/when we have even more essential workers sick than last year, with resulting breakdowns in food supply, and many hospitals so overwhelmed that they won’t be able to handle ER arrivals from people suffering stokes and heart attacks, or smashed up in car crashes? As we said in our post on the incoming CDC chief, the Biden administration is acting like it is fighting yesterday’s war, and that getting enough people vaccinated will dampen down the Super Covid wave to a manageable level. I wouldn’t bet on that, particularly with vaccinations prioritizing old people who are already not getting out much, while the new strains are much harder on young people.

The outlook for America looks grim, but that could quickly change Economist

Another Sanders meme (see Lambert in Water Cooler yesterday). This from Kevin C, who has quite the connected e-mail list (your truly is definitely on the slumming end of his recipients): 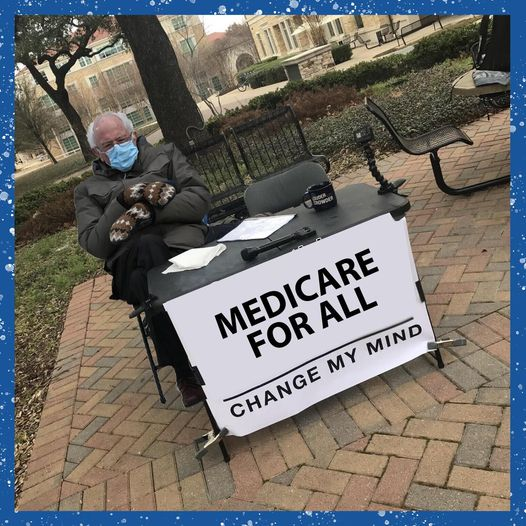 And: Bernie Sanders’ inauguration mittens: The funniest versions of the meme CNET

The Meaning of the Mittens: Five Possibilities Intercept. My addition: insecurity, both of the elites in their position (which as this piece stresses, they work SO HARD to protect/project) and ordinary people. Mittens are for children. But they are super warm, underscoring security needs. And Bernie’s looked like they might be indestructible. The fact that this mittens fixation has gone on so long say there is a serious disturbance in the force.

Under @NYGovCuomo marijuana “legalization” proposal, released Tuesday, selling ANY amount to a person under 21 is a class D felony which carries the potential of 2.5 yrs in prison. This same behavior is currently a misdemeanor. Legalization cannot mean increased criminalization.

Whose fault is that? Establishment cyber-police drive Parler off the internet, act surprised when it works with THE RUSSIANS RT Kevin W: “Key tweet – ‘Raise your hand if you understand the very significant impact this has on the ability to surveil and target insurrectionists who organize on Parler.'”

Google threatens to withdraw search engine from Australia BBC (David L). Wowsers. Would be great to demonstrate life does not depend on Google. So far both the PM and MPs are suitably pissed. May be one of the rare cases where Scotty from Marketing’s pig-headedness is a plus. Operationally the scheme may very well be a mess but they should put Google out of the Google News business.

Eggs, basket: The hidden and not-so-hidden risks for companies that invest in bitcoin Francine McKenna

Do College Degrees Mean More Wealth? St. Louis Fed (UserFriendly). The rentiers, as in the higher educational industrial complex, are extracting more of the income gains. You see the same pattern in M&A (even when there really are synergies between seller and buyer, in the overwhelming majority of cases, the seller extracts those gains in the sales price) and PE (PE firms extract their higher gross returns in overt and hidden fees and costs, leaving investors with public-stock-level returns).

22 Farm, Ranch, Manufacturer and Labor Groups Support American Blueberry Growers’ Trade Relief Request I eat a lot of blueberries. Now I will have to check to see if they are domestic or at worst Canadian.

This beautiful fellow is Mike. He resides with the folks who run the Trona Airport (Trona, California) and greeted us with abundant warmth when we visited. 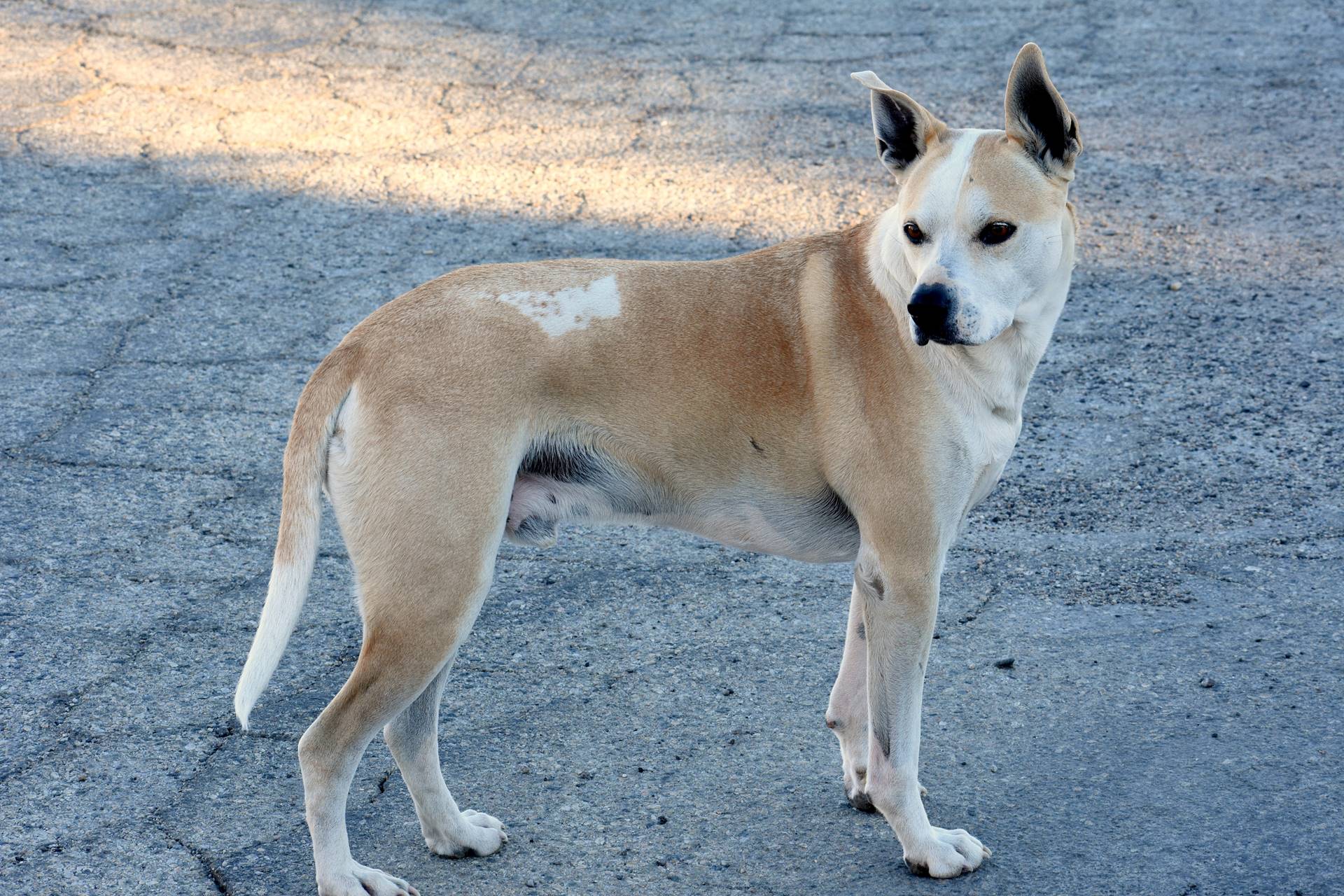