Yves here. This article discusses caregivers who are related to the elderly but oddly does not mention home health care aides. In Alabama, “health care providers” are eligible but most aides are not nurses. None of our aides have been able to get the vaccine and one has already gotten Covid!

Perhaps other states have more generous notions of what being a health care provider amounts to. But a second issue is that even if the definition were to include unlicensed caregivers, you quickly run up against the same issues you see in this article with respect to family members as caregivers. Alabama does not accredit or license home health care agencies but it could potentially extend vaccinations to anyone who was working for a firm that had been established at least a year ago. But many of the better aides wind up going solo and working directly for an elderly person or couple to have steadier work and higher pay.

This story also mentions that some elderly are too frail to leave home and get vaccinated. 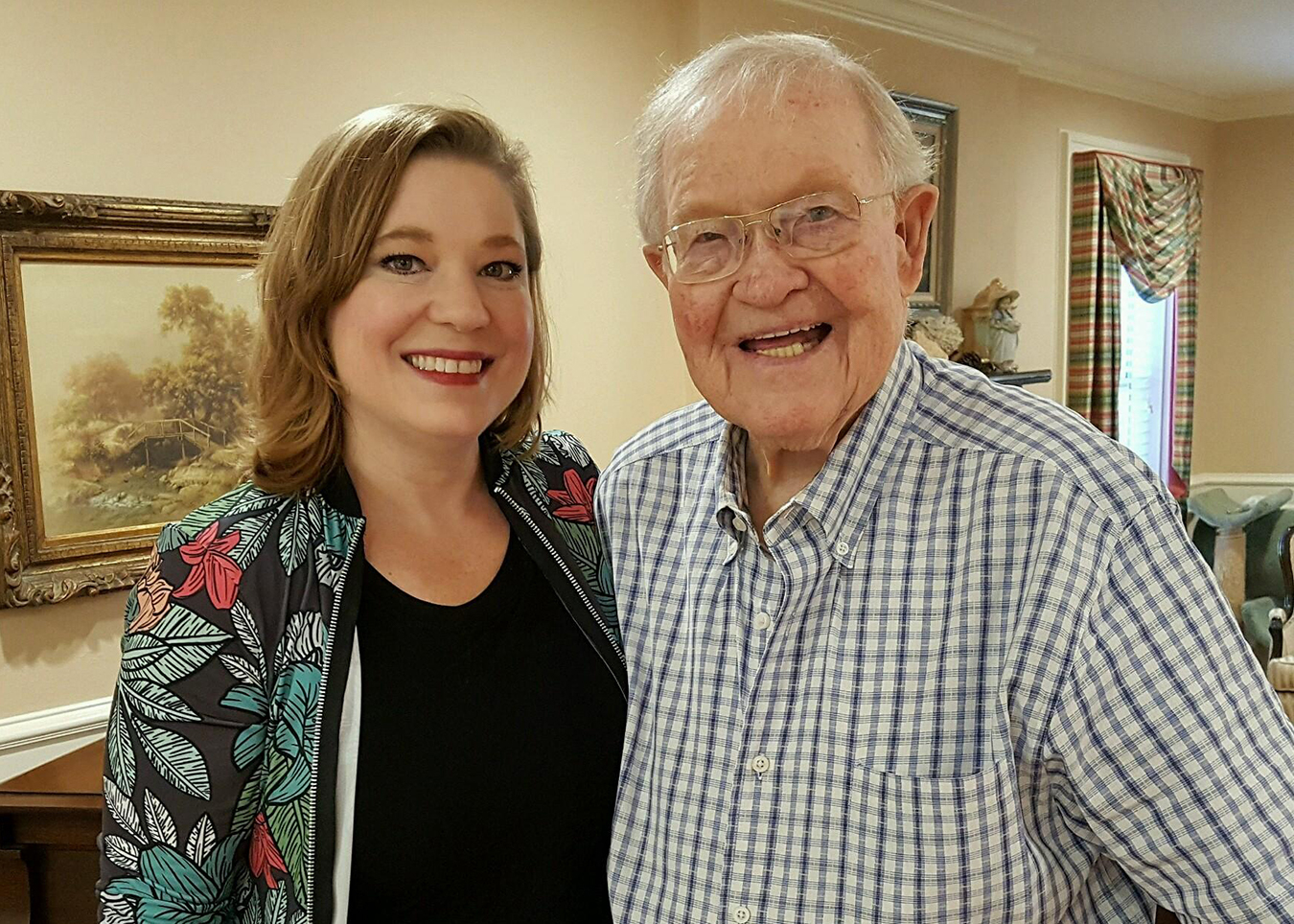 Robin Davidson is a full-time caregiver for her father, Joe, who has congestive heart failure. Worry over whether she’d bring covid-19 to her father has been on Davidson’s mind daily. But recently he was vaccinated ― “an indescribable relief,” she says. (Kevin Parker)

Robin Davidson entered the lobby of Houston Methodist Hospital, where her 89-year-old father, Joe, was being treated for a flare-up of congestive heart failure.

Before her stretched a line of people waiting to get covid-19 vaccines. “It was agonizing to know that I couldn’t get in that line,” said Davidson, 50, who is devoted to her father and usually cares for him full time. “If I get sick, what would happen to him?”

Tens of thousands of middle-aged sons and daughters caring for older relatives with serious ailments but too young to qualify for a vaccine themselves are similarly terrified of becoming ill and wondering when they can get protected against the coronavirus.

Like aides and other workers in nursing homes, these family caregivers routinely administer medications, monitor blood pressure, cook, clean and help relatives wash, get dressed and use the toilet, among many other responsibilities. But they do so in apartments and houses, not in long-term care institutions — and they’re not paid.

“In all but name, they’re essential health care workers, taking care of patients who are very sick, many of whom are completely reliant upon them, some of whom are dying,” said Katherine Ornstein, a caregiving expert and associate professor of geriatrics and palliative medicine at Mount Sinai’s medical school in New York City. “Yet, we don’t recognize or support them as such, and that’s a tragedy.”

The distinction is critically important because health care workers have been prioritized to get covid vaccines, along with vulnerable older adults in nursing homes and assisted living facilities. But family members caring for equally vulnerable seniors living in the community are grouped with the general population in most states and may not get vaccines for months.

The exception: Older caregivers can qualify for vaccines by virtue of their age as states approve vaccines for adults ages 65, 70 or 75 and above. A few states have moved family caregivers into phase 1a of their vaccine rollouts, the top priority tier. Notably, South Carolina has done so for families caring for medically fragile children, and Illinois has given that designation to families caring for relatives of all ages with significant disabilities.

Arizona is also trying to accommodate caregivers who accompany older residents to vaccination sites, Dr. Cara Christ, director of the state’s Department of Health Services, said Monday during a Zoom briefing for President Joe Biden. Comprehensive data about which states are granting priority status to family caregivers is not available.

Meanwhile, the Department of Veterans Affairs recently announced plans to offer vaccines to people participating in its Program of Comprehensive Assistance for Family Caregivers. That initiative gives financial stipends to family members caring for veterans with serious injuries; 21,612 veterans are enrolled, including 2,310 age 65 or older, according to the VA. Family members can be vaccinated when the veterans they look after become eligible, a spokesperson said.

“The current pandemic has amplified the importance of our caregivers whom we recognize as valuable members of Veterans’ health care teams,” Dr. Richard Stone, VA acting undersecretary for health, said in the announcement.

This is the group that should be getting vaccines, not caregivers who live at a distance or who don’t provide direct, hands-on care, said Carol Levine, a senior fellow and former director of the Families and Health Care Project at the United Hospital Fund in New York City.

Rosanne Corcoran, 53, is among them. Her 92-year-old mother, Rose, who has advanced dementia, lives with Corcoran and her family in Collegeville, Pennsylvania, on the second floor of their house. She hasn’t come down the stairs in three years.

“I wouldn’t be able to take her somewhere to get the vaccine. She doesn’t have any stamina,” said Corcoran, who arranges for doctors to make house calls when her mother needs attention. When she called their medical practice recently, an administrator said they didn’t have access to the vaccines.

Corcoran said she “does everything for her mother,” including bathing her, dressing her, feeding her, giving her medications, monitoring her medical needs and responding to her emotional needs. Before the pandemic, a companion came for five hours a day, offering some relief. But last March, Corcoran let the companion go and took on all her mother’s care herself.

Corcoran wishes she could get a vaccination sooner, rather than later. “If I got sick, God forbid, my mother would wind up in a nursing home,” she said. “The thought of my mother having to leave here, where she knows she’s safe and loved, and go to a place like that makes me sick to my stomach.”

Although covid cases are dropping in nursing homes and assisted living facilities as residents and staff members receive vaccines, 36% of deaths during the pandemic have occurred in these settings.

Maggie Ornstein, 42, a caregiving expert who teaches at Sarah Lawrence College, has provided intensive care to her mother, Janet, since Janet experienced a devastating brain aneurism at age 49. For the past 20 years, her mother has lived with Ornstein and her family in Queens, New York.

In a recent opinion piece, Ornstein urged New York officials to recognize family caregivers’ contributions and reclassify them as essential workers. “We’re used to being abandoned by a system that should be helping us and our loved ones,” she told me in a phone conversation. “But the utter neglect of us during this pandemic — it’s shocking.”

Ornstein estimated that if even a quarter of New York’s 2.5 million family caregivers became ill with covid and unable to carry on, the state’s nursing homes would be overwhelmed by applications from desperate families. “We don’t have the infrastructure for this, and yet we’re pretending this problem just doesn’t exist,” she said.

In Tomball, Texas, Robin Davidson’s father was independent before the pandemic, but he began declining as he stopped going out and became more sedentary. For almost a year, Davidson has driven every day to his 11-acre ranch, 5 miles from where she lives, and spent hours tending to him and the property’s upkeep.

“Every day, when I would come in, I would wonder, was I careful enough [to avoid the virus]? Could I have picked something up at the store or getting gas? Am I going to be the reason that he dies? My constant proximity to him and my care for him is terrifying,” she said.

Since her father’s hospitalization, Davidson’s goal is to stabilize him so he can enroll in a clinical trial for congestive heart failure. Medications for that condition no longer work for him, and fluid retention has become a major issue. He’s now home on the ranch after spending more than a week in the hospital and he’s gotten two doses of vaccine — “an indescribable relief,” Davidson said.

Out of the blue, she got a text from the Harris County health department earlier this month, after putting herself on a vaccine waitlist. Vaccines were available, it read, and she quickly signed up and got a shot. Davidson ended up being eligible because she has two chronic medical conditions that raise her risk of covid; Harris County doesn’t officially recognize family caregivers in its vaccine allocation plan, a spokesperson said.