Yves here. This is the sort of piece I enjoy, since it challenges several widely held but inaccurate beliefs about the Prohibition. It also suggests that a better approach to illicit or newly legalized substances that just legalizing them is to legalize them and tax them. In New York City, high cigarette taxes have lowered usage levels.

The year 2020 marked the centenary of Prohibition, under which the production and sale of alcohol in the US was banned for nearly 14 years. Though it required an unprecedented intervention into the nation’s economic and social fabric, there has been little quantitative analysis of Prohibition’s impact on public health. This column presents new research suggesting that a substantial increase in infant mortality followed the repeal of Prohibition in the 1930s – an unanticipated, negative health outcome worth considering as debates resume over the legalisation of cannabis and other drugs.

The year 2020 marked the centenary of the federal prohibition on the production, sale, and transportation of alcohol in the US (Neklason 2020). In the years since, there has been broad interest in understanding why the Prohibition movement spread in the years before 1920, how federal Prohibition was enforced in the years after 1920, and why it was so quickly repealed, in 1933 (Rorabaugh 2018).

However, social scientists should be interested in this peculiar episode for more than mere antiquarianism. Federal Prohibition was an immense and unprecedented intervention into the economic and social fabric of the US (Kyvig 2000, Okrent 2010), but there is surprisingly little research in quantitatively assessing its outcomes. Given its scope, such an assessment could also inform policy making in the present, particularly as it relates to the currently evolving legalisation of cannabis and the potential de jure decriminalisation – but de facto legalisation — of even ‘harder’ drugs (Selsky 2021).

Prohibition in the Collective Imagination Versus Reality

A brief review of the popular history of Prohibition in the US suggests that it failed to subdue, and perhaps even encouraged, the long-standing alcoholic proclivities of many Americans. This was the age of cocktails, jazz, and speakeasies, after all. However, in reality Prohibition had its most significant effects on the price — but not necessarily the availability — of alcohol (Cook 2007).

As with anything that effectively functions as a large tax on a product, there was a sizeable impact on consumption due to Prohibition. Contrary to public opinion, total alcohol consumption per person fell by 63% from 1910 (the high-water mark of pre-Prohibition drinking activity) to 1934 (the first full year of repeal). And while illegal sources of alcohol were indeed available prior to and even after 1934, it took until 1973 for apparent per-capita alcohol consumption to recover from the shock of Prohibition (as seen in Figure 1). 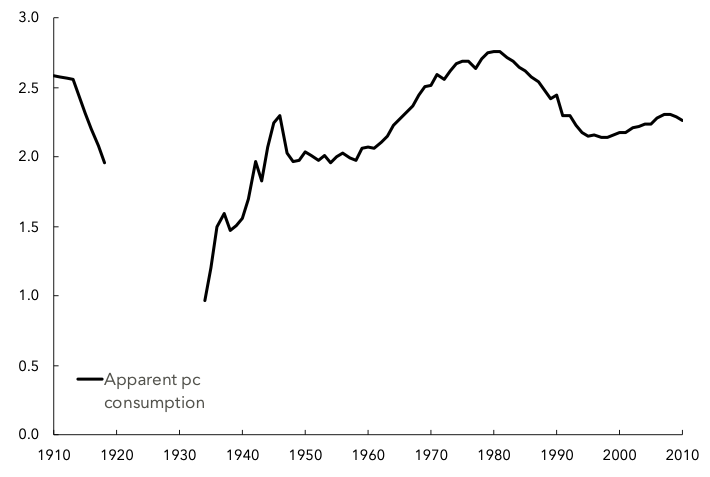 Another important aspect of Prohibition was how it was ended. Specifically, the process of repeal was not uniform, with national restrictions on alcohol ‘turning on’ precisely in 1920 and ‘turning off’ precisely in 1933. The chief compromise for achieving its ratification was allowing local communities to determine liquor laws appropriate to local conditions. This not only explains why approximately 10% of all US counties still prohibit the sale of alcohol, but also provides useful variation for conducting statistical analysis on the effects of Prohibition’s repeal (as seen in Figure 2). 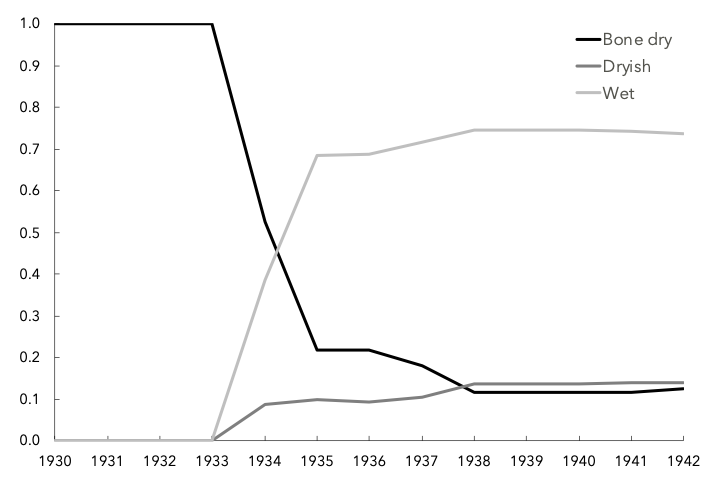 Infant Mortality and the Repeal of Federal Prohibition

In Jacks et al. (2021), we explore the link between infant mortality and repeal, from 1933 to 1939. Infant mortality is not only a key determinant of life expectancy, but also a rough indicator of population health, making it an obvious starting point for research focused on the public-health effects of repeal.

We find that repeal was associated with equivalent and significant increases in infant mortality in both counties that chose to allow for the sale of alcohol (wet counties) and in neighbouring counties that chose not to (dryish counties), suggesting a large role for cross-border policy spillovers. In other words, some people in dry counties found the temptation of alcohol just across the border too tempting to resist.

Cumulatively, we estimate that 4,493 annual excess infant deaths could be attributed to the repeal of federal Prohibition. We have some evidence that this was due to an increase in maternal alcohol consumption by problem drinkers during pregnancy, but other mechanisms are possible.

Urban Mortality and the Repeal of Federal Prohibition

A frequent retort to the results above on infant mortality relates to popular impressions of the Prohibition period, namely that it saw a massive rise in organized crime and an attendant increase in gangland violence directly attributable to Prohibition. In Jacks et al. (2020), we address this issue head-on by assessing the effects of federal Prohibition’s repeal on multiple causes of urban mortality.

For instance, one reasonable hypothesis is that repeal would be associated with an increase in other accidents due to drunken misadventure. But another equally reasonable hypothesis is that repeal would also be associated with a decrease in accidental poisonings due to renewed access to legal supplies of unadulterated alcohol. Thus, it is a fundamentally empirical question as to which direction such countervailing forces work themselves out.

When we combine our estimates with the timing of these transitions by cumulating homicides and other accidents by wet status, a back-of-the-envelope calculation suggests an annual reduction of 3,418 urban deaths (565 fewer homicides plus 2,853 fewer other accidents) that could be attributed to the repeal of federal Prohibition.

Prohibition’s Repeal in the Balance

For whatever benefits the repeal of federal Prohibition conferred in terms of consumer welfare, diminished expenditure on law enforcement, and freedom of choice, it also came at the cost of increasing infant mortality in both dryish and wet counties. And this increase in infant mortality was not fully offset by equivalent declines in non-infant urban mortality. Furthermore, from the perspective of assigning the value of a statistical life, any consideration of balancing the respective rates of mortality should put more weight on averting infant — as opposed to adult — deaths.

Naturally, there were other associated components of repeal that remain unexplored and should be added to any reckoning with Prohibition’s legacy. However, the cumulative results suggest that, on net, repeal had negative effects on public health and mortality in the US. This is one history lesson well worth considering as debates over the legalisation of illicit substances remerge.