Man arrested after drone found with a bag of heroin on board, Simi Valley police say Yahoo (resilc)

Want to improve your health? Head to a national park, and absorb the sounds PhysOrg

Covid: The countries that nailed it, and what we can learn from them BBC (ma)

U.S. Health Officials Question AstraZeneca Vaccine Trial Results New York Times. My reply to furzy, who sent this link: “I hate to sound like a CT type, but this does not smell right.” Her reply: “!!!!…Quote:”

Dr. Eric Topol, a clinical trials expert at Scripps Research in San Diego, said it was “highly irregular” to see such a public display of friction between a monitoring board and a study sponsor, which are typically in close concordance.

“I’ve never seen anything like this,” he said in an interview after the institute’s statement was released. “It’s so, so troubling.”

Covid-19 Flight From Hell: My Run-In With An Infected Passenger Forbes. I bet there were multiple violations of the Conditions of Carriage. Too bad he couldn’t have invoked a relevant section.

Foreign holidays will be ILLEGAL from Monday: New Covid laws mean £5,000 fines for anyone leaving the UK without ‘reasonable excuse’ – and restrictions could last for some holiday hot-spots ALL summer Daily Mail

Variants Rise in Some States, Adding Urgency to Vaccine Push Bloomberg. Ahem, if long Covid is a significant driver of new variants, it’s not clear that vaccination will have all that much impact. The vaccines have been measured for efficacy in preventing severe infections and deaths, not asypmtomatic cases (at least the Pfizer vaccine, where clinical trial participants were not all tested regularly; you had to be symptomatic to be tested). Many long Covid cases were asymptomatic at onset. And even if it does keep or reduce the number getting long Covid, there’s still a significant pool of the afflicted out there who may continue incubating new variants.

Winners, losers, and in-betweeners: How pharma companies stacked up in the Covid-19 vaccine race STAT

China retaliates after sanctions move by US, EU and UK Financial Times. Over the Uighurs.

Tiananmen Square, Uyghur Court: Tower Hamlets plans name changes in solidarity. “As the Chinese embassy prepares to move in, councillors vote to support the ‘freedom and diversity of our borough’” Guardian. This is not adult behavior. Shades of “freedom fries”.

Brexit has already been a disaster for British trade Encompass

Harry and Meghan Finally Admit They Didn’t Have Secret Backyard Wedding Daily Beast. Everything verifiable that Meghan and Harry said in the Oprah interview with respect to the Royal Family is been false. I continue to be gobsmacked at the craven US coverage.

Sinema, Cornyn urge Biden to use ‘full authorities’ at border The Hill (resilc)

I want to reiterate something, because we shouldn't be numb to it:

Hedges: The Evil Within Us ScheerPost (Chuck L)

Trump ramps up activities, asserts power within GOP The Hill

The World Darkens a Little More: I May Have to Spend Some Time as a Political Prisoner Craig Murray

For those of you who don’t know, @CraigMurrayOrg was convicted today in his contempt case. Can we try to get #IStandWithCraigMurray trending pretty please?

The Campaign of Lies Against Journalist Jesse Singal—And Why It Matters Quilette (UserFriendly). Important but also sobering.

The New Normal “Reality” Police CJ Hopkins. Not on board with all of Hopkins’ views, but this is absolutely nuts and also revealing. “Free speech” only exists in a public context, as in in the town square, in a public meeting (most of all in a government setting). Opinion, as long as it falls short of hate speech, advocacy of violence, or “yelling ‘fire’ in a crowded theater” is ever and always protected speech. But this all goes out the window on private platforms.

Sovereign Writers and Substack Stratechery (UserFriendly). Way overthinking this. Many writers want as close to a turnkey approach as possible. I spend a ton of time and meaningful hard $ on administrativa. But I had my own tiny consulting shop for many years so having to handle the business of this business isn’t an alien concept. And I value control a ton. By contrast, unlike many others, I prefer turnkey approaches to dealing with shelter and hate having to play property manager.

John Cleese has an NFT bridge to sell you for $69.3 million The Verge (resilc)

Famous financial bubbles vs. the S&P 500 (and Bitcoin)

UC’s deal with Elsevier: What it took, what it means, why it matters Berkeley News (UserFriendly)

Richest Americans Hide 20% Of Income, Costing You $175 Billion Annually Heisenberger Report (resilc). My world-recognized tax expert (lectures around the world and was calling for closing the carried interest loophole long before it was fashionable) is skeptical that the #s are this high. The US is better at identifying income of the super rich (taxing it is another matter, the IRS pretty much always loses big $ tax litigation cases, and that’s with trying to focus resources on winners). Says a most money that goes though the Caymans does not stay there, and so suspects double counting in Zucman’s numbers.

Retail Sales Fell 3.0% in February After January Sales Were Revised 1.9% Higher Angry Bear. But still 6.3% ahead of last year…

Amazon workers strike in Italy over pandemic-driven delivery demands Reuters Resilc: “Sat night at 745pm we get an amazon delivery. Some non-essential thing.”

Antidote du jour o4amuse: “California Sea Lions in Yaquina Bay, Newport Oregon.” Moi: I don’t know if you’ve ever had the opportunity, but I could readily spend an afternoon with a cup of coffee or a glass of wine, seated near sea lions like this, watching their antics. I’ve only seen them like this once, on a wharf in San Francisco, where someone worked out that leaving a few big square floating wooden platforms for their use would be a big tourist draw. They pile up on them, I assume to sun. They regularly readjust themselves, leading to some flopping and grumbling. Occasionally another sea lion will haul himself out of the water and try to force the others to open up a spot (there always seems to be more arrivals than departures), which will usually lead to a heated argument before the newcomer gets his place. 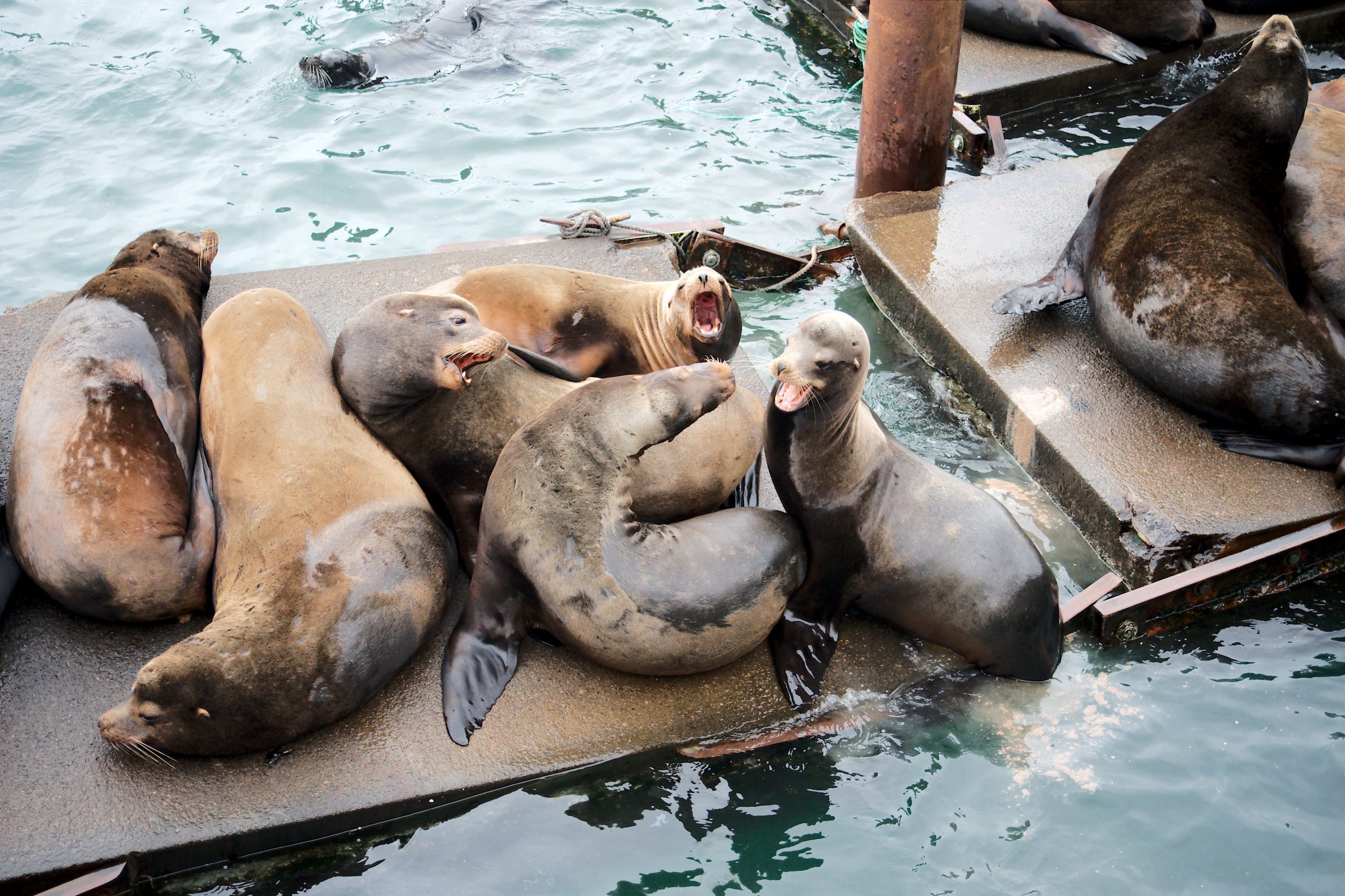 And a bonus (BC). I want whatever that dog is on: