Human capital is a critical component of economic development. But the links between growth and human capital – when measured by years of schooling – are weak. This column introduces a better measurement, using a database that directly measures learning and represents 98% of the global population. The authors find that the link between economic development and human capital is strong when measured in this way. They also show that global progress in learning has been limited over the past two decades, even as enrolment in primary and secondary education has increased.

For decades, human capital research has relied on measures of schooling (Mincer 1984, Mankiw et al. 1992). But proxying human capital with schooling assumes that being in school translates into learning. Evidence suggests that this is often not the case (Pritchett 2013). Recent analysis reveals that six out of ten adolescents worldwide cannot meet basic proficiency levels in maths and reading (UNESCO 2017). This gap between schooling and learning is particularly acute in developing countries. In Kenya, Tanzania, and Uganda three quarters of grade 3 students cannot read a basic sentence such as “The name of the dog is Puppy”. In rural India, half of grade 3 students cannot solve a two-digit subtraction problem such as 46 minus 17 (World Bank 2018).

Several studies have presented the argument that when human capital is measured by schooling, it fails to deliver the returns predicted by growth models. But when measured by learning, human capital is more strongly associated with growth (Pritchett 2006, Kreuger and Lindahl 2011, Hanushek and Woessmann 2012). Understanding growth is critical (Akcigit et al. 2020), and while good country studies exist (Fazzio et al. 2020), we still need comparable, global, timeseries data.

To date, much of the effort to measure learning has focused on advanced economies. This has come at the expense of a significant portion of the global distribution, in particular those countries with the most potential to gain from human capital accumulation. This limitation is due to the absence of comparable measures of learning in developing countries.

In a recent paper, we introduce a database of globally comparable learning outcomes for 164 countries, covering 98% of the global population from 2000 to 2017 (Angrist et al 2021). This is the largest and most current global learning database, and one of the first to disaggregate learning results by gender or introduce methodological improvements such as the inclusion of standard errors to quantify uncertainty. The database is available for public use and updates are expected periodically as new learning data become available. A large-scale effort to track human capital formation using this database is the World Bank’s Human Capital Index. We contribute to a body of research in this area (e.g. Rindermann 2018).

The Human Capital Gap: Schooling Is Not Learning

We explore the contrast between changes in schooling and changes in learning over time, from 2000-2015. We observe a clear pattern of high and increasing school enrolment, while learning progress appears to be limited in many cases. For example, in the Middle East and North Africa enrolment rates achieved a high of 99% by 2010, up from 95% in 2000. In contrast, learning levels stayed low and remained the same (around an initial score of 380) from 2000 to 2015 in these regions. This pattern has been referred to in previous studies and by the international education community as ‘the learning crisis’. Using the HLO database, we demonstrate that this crisis holds on a global scale.

Figure 2 Enrolment versus learning by region, conditional on country-fixed effects. 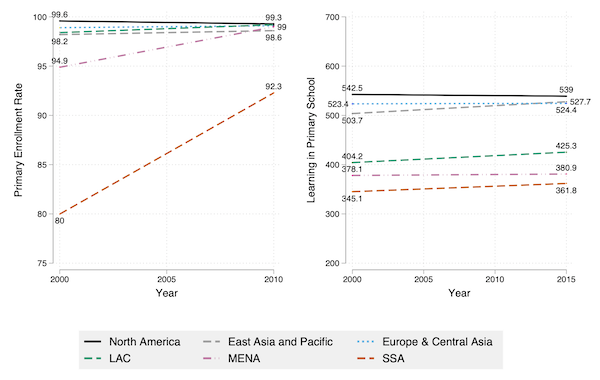 Source: The data in this figure include primary enrolment rates from Lee and Lee (2016) and learning estimates from the Harmonized Learning Outcomes (HLO) database.

Several studies in development accounting have explored the relative contribution of human capital to cross-country income differences. The results have been inconclusive, in part owing to difficulties in measuring human capital. Our results suggest that human capital accounts for between a fifth to around half of cross-country differences in income, sitting somewhere in the middle compared to other work (Hall and Jones 1999, Jones 2014, Caselli and Ciccone 2019), which ranges from zero to nearly all (Table 1). This result is not meant to provide definitive estimates, but rather to motivate the use of a direct measure of learning in future analysis in the development accounting literature.

Table 1 Baseline development accounting results and comparison to the literature

We also find stronger links between our measure of human capital and growth than human capital measures which rely largely on schooling, such as the Penn World Tables (Feenstra et al. 2015) and the United Nations Human Development Index (UNDP 2013).

This database comes at a moment when a series of global efforts have been launched to measure and track learning on a global scale. Although recent analysis suggests that the world is on track to achieve the goal of universal primary enrolment by 2030, if learning continues to stagnate, this achievement will mean little.

Our findings have substantial implications for the future of work. As developing economies become increasingly service-oriented and automation and digitisation continue to expand, skilled work will be critical to enable workers to secure the jobs of the future (Baldwin and Forslid 2020). Human capital is a critical enabler of this transition. Our findings reveal that schools – which have for decades been assumed to impart knowledge and skills – have often fallen short. But if they deliver in terms of learning, the development gains could be substantial.