Our political class does not believe that Barack Obama is a candidate for rehabilitation (“revered by liberals, moderates and even some Republicans“) despite recently pivoting to a consensus that his response to the Great Financial Crash was not all it could be. Even today, it’s almost impossible, get anybody to the left of Joe Lieberman (Obama’s mentor) to say that Obama was a bad President. d As Matt Stoller writes in The Boston Review:

Even today you cannot get a single elected left-wing politician to say that Obama was a bad president. Think about that. We cannot have an honest discussion of what it meant to use power when Democrats were in charge, so the language of dissension is polluted with incoherent nonsense. All the grand philosophical musing and Democratic Socialists of America study groups do not matter when not a single elected official outside the Republican Party can make the simple, obvious point that Obama’s policies straight up made things worse.

This was not some capitalist plot. There was a lot of dissent within the Democratic Party about whether it was a good idea to do what Obama did. I was part of a network of people who tried to fight against the foreclosure nonsense and opposed Obama’s handing Puerto Rico over to hedge funds [here]. We lost. And the people who made public explanations about these fights lied to cover up for Obama’s bad choices. They lied because some of them are frauds, but also because it was painful not to; Democratic voters and many left-wing voters were and still are deeply hostile to any criticism of Obama. He is beloved; according to Gallup polling, 95 percent of Democrats have a favorable view of him. To the extent there is skepticism, it is framed in ways that avoid admitting that his actions systemically ruined millions of lives.

Well, I’m happy to call Obama a bad President, because he was. Of the many horrors of the Obama years, I will pick three. (I am omitting not prosecuting bankers for accounting control fraud, the HAMP debacle, the mortgage settlement debacle, destroying a generation of black wealth with his housing policies, the disposition matrix, whacking a US citizen with a drone strike and no due process, ObamaCare and not single payer, the ObamaCare website collapsing on launch (with nobody held accountable), not closing Gitmo, the Afghanistan surge, enabling Google’s monopoly on search, creating the conditions for Trump.) All three are chosen to show continuties with the Bush Administration, rather than differences. Again I will beg your indulgence for sketchiness, since 2021 – 2008 = 13 years ago, and I’m operating mostly from memory, despite having blogged through those years, just as I blogged through the Bush years. As with Bush, a full accounting would be book-length. Or perhaps there should be a podcast, which would take hundreds of episodes. (Hmm. Not a bad idea. The podcast would have the same title as this post.)

You will remember Bush’s program of warrantless surveillance from the post on Bush. The battle against it was conducted under the confusing banner of “FISA Reform” (that is, the battle framed not that Bush’s actions destroyed the Fourth Amendment, but that the process of FISA authorization was not properly followed). Nonetheless, the blogosphere of that time played a big role in that battle (I was there, albeit peripherally) which Eric Boehlert describes well in his book Bloggers on the Bus. Here is a long excerpt (the legislation in the first sentence is FISA Reform). I’ve added the highlighting: 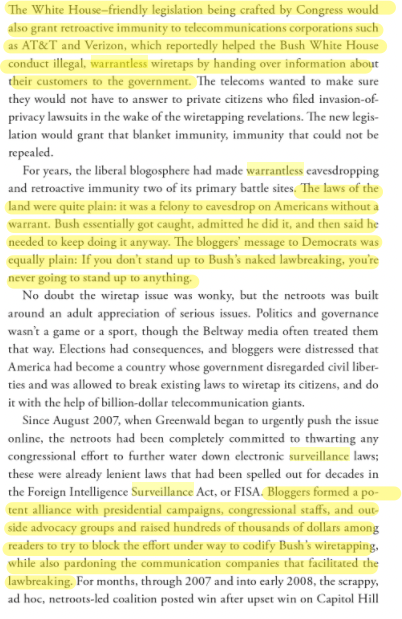 So, where was Obama on “FISA Reform”? That depends. From Politifact:

In October 2007, Obama spokesman Bill Burton issued this unequivocal statement to the liberal blog TPM Election Central: “To be clear: Barack will support a filibuster of any bill that includes retroactive immunity for telecommunications companies.”

Key segments of the Democratic base — enjoying substantial influence in the run-up to the Democratic presidential primaries — were pleased. “This is the kind of leadership we need to see from the Democratic candidates,” MoveOn spokesman Adam Green said at the time.

Obama clinched the Democrat nomination on June 4, 2008. Nomination safely in hand, he changed his mind on “FISA Reform”[1] in July:

In October, Obama had vowed to help filibuster an update of the Foreign Intelligence Surveillance Act (FISA) that gave telecommunication companies that had cooperated with President Bush’s warrantless wiretapping program immunity from lawsuits.

The Senate voted Wednesday on the bill updating FISA — which had a provision to shield telecommunications companies that had cooperated in the surveillance. Obama joined the 68 other senators who voted to send the bill to the president’s desk.

No filibuster! Putting Fourth Amendment issues aside, if you think that granting corporations retroactive immunity for multiple felonies is a really bad idea from the standpoint of the [genuflects] rule of law, then Obama’s flip-flop — let’s just go ahead and call it a betrayal — is a bad act by a bad President. (On the bright side, Obama’s pivot looks like an inflection point: Where Democrats won the loyalty or at least the alliance of the intelligence community, which worked so for them in 2016-2020.)

You will also remember torture under the Bush administration, and there was plenty of it, more than merely Abu Ghaib.[1] One would think that a professor of Constitutional Law — as his supporters constantly reminded us Obama was, albeit without mentioning his non-tenure track status — would favor prosecuting war crimes, particularly war crimes committed on a political opponent’s watch, in service of a war that professor putatively opposed. No such luck. From ABC’s “The Week” on January 10, 2009 (10 days before Inauguration Day[2]). Watch the weaseling!

STEPHANOPOULOS: The most popular question on your own website is related to this. On change.gov it comes from Bob Fertik of New York City and he asks, “Will you appoint a special prosecutor ideally Patrick Fitzgerald to independently investigate the greatest crimes of the Bush administration, including torture and warrantless wiretapping.”

OBAMA: We’re still evaluating how we’re going to approach the whole issue of interrogations, detentions, and so forth. And obviously we’re going to be looking at past practices and I don’t believe that anybody is above the law. On the other hand I also have a belief that we need to look forward as opposed to looking backwards. And part of my job is to make sure that for example at the CIA, you’ve got extraordinarily talented people who are working very hard to keep Americans safe. I don’t want them to suddenly feel like they’ve got to spend all their time looking over their shoulders and lawyering (ph).

STEPHANOPOULOS: So, no 9/11 commission with Independence subpoena power?

OBAMA: We have not made final decisions, but my instinct is for us to focus on how do we make sure that moving forward we are doing the right thing. That doesn’t mean that if somebody has blatantly [nice qualifier] broken the law, that they are above the law. But my orientation’s going to be to move forward.

STEPHANOPOULOS: So, let me just press that one more time. You’re not ruling out prosecution, but will you tell your Justice Department to investigate these cases and follow the evidence wherever it leads?

OBAMA: What I — I think my general view when it comes to my attorney general is he is the people’s lawyer. Eric Holder’s been nominated. His job is to uphold the Constitution and look after the interests of the American people, not to be swayed by my day-to-day politics. So, ultimately, he’s going to be making some calls, but my general belief is that when it comes to national security, what we have to focus on is getting things right in the future, as opposed looking at what we got wrong in the past.

Stephanopolous really should have said “I’ll take that as a ‘no.'” And how is there an “other hand” to “I don’t believe that anybody is above the law”? Fast forward to the administration Obama created the conditions for, and we see the results. From the Atlantic, “Obama’s Legacy of Impunity for Torture“, on the nomination of “Bloody Gina“:

The 44th president, Barack Obama, bears a measure of responsibility for the recklessness of his successor, in particular Trump’s decision to appoint Gina Haspel, the Central Intelligence Agency’s deputy director, to run the agency itself. Haspel oversaw a black site during the Bush era where at least one detainee, Abd al-Rahim al-Nashiri, was tortured*.

Haspel also then played a role in a decision to destroy recordings of CIA detainees being tortured.

The Obama administration’s actions helped entrench a standard of accountability that stretches from beat cops to CIA officials, one in which breaking the law in the line of duty is unpunishable, but those suspected of a crime—particularly if black, Muslim, or undocumented—can be subjected to unspeakable cruelty whether or not they are ultimately guilty.

In a country where a CIA official like Haspel can destroy evidence in order to obstruct a federal investigation, and not only escape prosecution but rise to become the head of the agency, it is no wonder that the president and his allies behave as though the possibility of the law catching up to them is not merely remote, but a kind of absurdity.

So, thanks to Obama, we’ve legitimized torture, and a torturer became the head of the CIA. That was a bad act by a bad President.

President Bush, in the second week of his administration, charged his Vice-President, Dick Cheney, with heading up an Energy Task Force. Larry Schweiger describes the result in “The Climate Crisis and Corrupt Politics: Overcoming the Powerful Forces that Threaten our Future“: 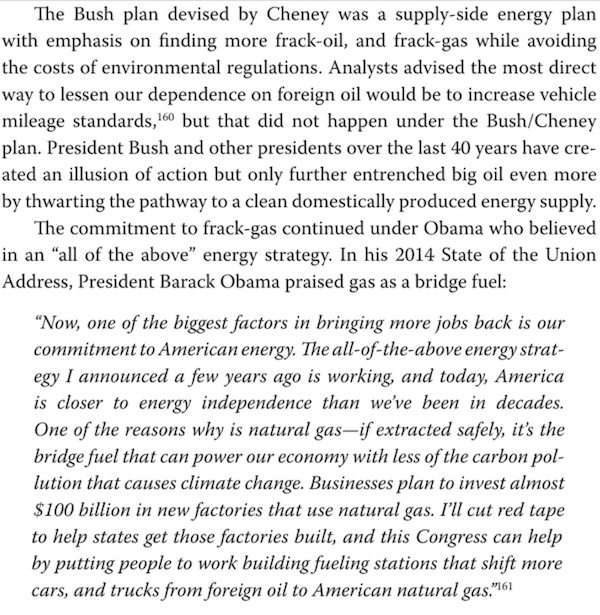 So we have Cheney and Obama working together to create fracking. Obama is, in fact, proud of this:

We are ruled by bad people and have been for years. Madison, of course, expected this, but his system seems to have broken down Federalist 51:

But the great security against a gradual concentration of the several powers in the same department, consists in giving to those who administer each department the necessary constitutional means and personal motives to resist encroachments of the others. The provision for defense must in this, as in all other cases, be made commensurate to the danger of attack. Ambition must be made to counteract ambition. The interest of the man must be connected with the constitutional rights of the place. It may be a reflection on human nature, that such devices should be necessary to control the abuses of government. But what is government itself, but the greatest of all reflections on human nature? If men were angels, no government would be necessary. If angels were to govern men, neither external nor internal controls on government would be necessary. In framing a government which is to be administered by men over men, the great difficulty lies in this: you must first enable the government to control the governed; and in the next place oblige it to control itself.

No longer is ‘the interest of the man … connected with the constitutional rights of the place” (that is, of the office). If that were true, Bloody Gina would not have headed the CIA. It’s not even clear that the government can “control itself,” or “control the governed,” except by propaganda and violence, as our continuing public health debacle shows. I don’t know what the answer to this is, but I do think it begins with the recognition that we are ruled by bad people. Simply replacing “bad people” with “good people” does not have a record of success, since the “good” quickly become “bad.”[3] How to rebuild our political economy so that we seem to be governed by angels even though we are not is a question that I cannot answer. But it is a question increasingly before us.

[1] One of the more amusing aspects of the Bush Administration’s approach to torture was watching them devise euphemisms for it: “enhanced interrogration,” “rough treatment,” and “severe tactics.”