By Steve Roth, the Publisher of Evonomics. He is a Seattle-based serial entrepreneur, and a student of economics and evolution. He blogs at Asymptosis, Angry Bear, and Seeking Alpha. Twitter: @asymptosis. Originally published at Evonomics

You hear a lot about bottom-up and middle-out economics these days, as antidotes to a half-century of “trickle-down” theorizing and rhetoric. You’re even hearing it, prominently, from Joe Biden.

They’re compelling ideas: put more wealth and income in the hands of millions, or hundreds of millions, and you’ll see more economic activity, more prosperity, and more widespread prosperity. To its proponents, it seems deeply intuitive or even obvious, a formula for The American Dream.

But curiously, you don’t find much nuts and bolts economic theory supporting that view of how economies work. There’s been lots of research on the sources and causes of wealth and income concentration. There’s been a lot of important work on the social and political effects of inequality — separate (though tightly related) issues. But unlike the steady stream of “incentive” theory from Right economists over decades, Left and heterodox economists have largely failed to ask or answer a rather basic theoretical (and empirical) question: what are the purely economic effects of highly-concentrated wealth, held by fewer people, families, and dynasties, in larger and larger fortunes?

In a new paper and model published in Real-World Economics Review, I try to tackle that question. The model takes advantage of national accountants’ wealth measures that have only been available since 2006 or 2012 (with coverage back to 1960), and measures of wealth distribution that were only published in 2019. Combined with thirty+ years of consistent survey data on consumer spending at different income levels, the paper derives a novel economic measure: velocity of wealth. 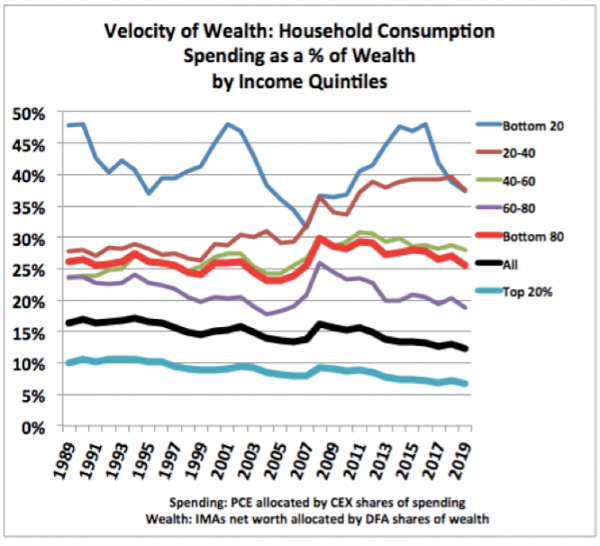 The bottom 80% group turns over its wealth in annual spending three or four times as fast as the top 20%. The arithmetic takeaway: at a given level of wealth, more broadly distributed wealth means more spending: the very stuff of economic activity, which is itself the ultimate source of wealth accumulation.

The details of the model are somewhat more complex, but it only employs five easy to understand formulas — all basically just arithmetic, and all expressed without resort to abstruse symbols; they use plain language.

How good are the model’s predictions? It starts with just two numbers in 1989 — the wealth of the top 20% and the bottom 80% — and extrapolates forward using those few formulas to predict levels of wealth, spending, and shares of wealth and spending, thirty years later. 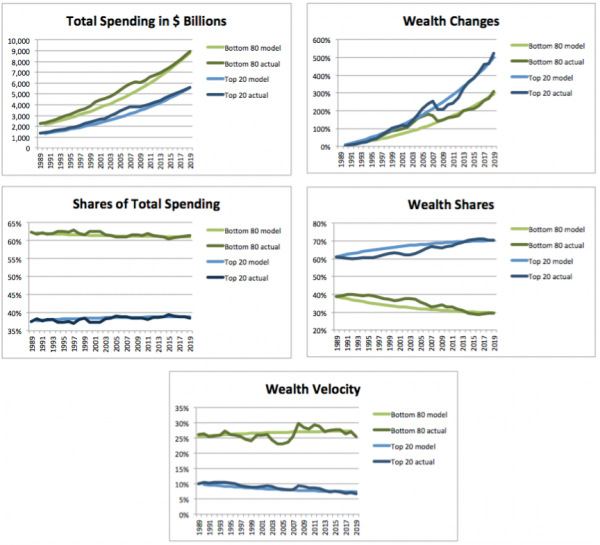 Compare the model’s predictions for 2019 to actual results; in each case they’re almost identical.

It’s easy to add counterfactuals to this model: what would have happened if some percentage of top-20% wealth was transferred, redistributed, to the bottom 80% every year over those three decades. The results are pretty eye-popping. 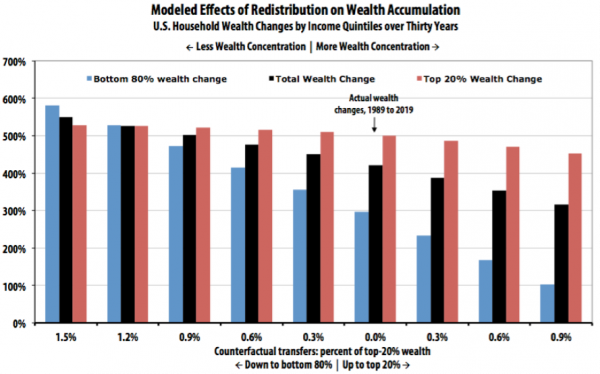 Downward redistribution appears to make everyone quite a lot wealthier, faster – especially (no surprise) the bottom 80%. Economic activity, annual spending, increases even faster. Taking the leftmost bars as an example: with an annual 1.5% downward transfer, greater spending would have resulted in a 549% total wealth increase, versus actual 421%. (To put that 1.5% downward transfer in context: the compounding annual growth rate on a passive wealthholder’s 60/40 stock/bond portfolio over that thirty years was about 7.5%. That’s all unearned income, received simply for holding wealth.)

With 1.5% in downward redistribution, 2019’s total consumption spending — a pretty good index or proxy for GDP — would have been 52% higher. Total wealth would have been 16% higher.

It’s worth noting: excepting the two leftmost scenarios (1.5% and 1.2%), the top 20% keep getting relatively richer than the bottom 80%. Avoiding the increased wealth concentration that we’ve seen since 1989 (or even reducing the 1989 concentration) would have required at least an annual 1.2–1.5% downward wealth transfer from the top 20%.

The very richest percentile groups, of course, might not have gotten richer with downward redistribution. It would depend on the mechanics and progressivity of the transfers. The data available here don’t let us determine that using this model. But the transfers would have to be far larger than envisioned here before top-percentile wealth levels (vs their relative share) actually stagnated or declined. Absent quite extreme redistribution, the rich keep getting richer as the economy grows. But with adequate redistribution to counter the ever-present trend toward economy-crippling wealth concentration, everybody else prospers as well.

The paper, model, data, and all calculations are available here.