For Startup Leaders, SPACs Have Lost Their Allure WSJ. If Silicon Valley can’t stomach them, SPACs must be… quite something.

New Research Suggests Number of Kids Hospitalized for COVID Is Overcounted New York Magazine. Many interesting issues raised. The researchers distinguish between children hospitalized for Covid (symptomatic) and those hospitalized with Covid (asymptomatic, tested in hospital). But I am not sure that takes the possibility of asymptomatic long-haul children into account. And then there’s this:

Explaining why the official tallies were found to be so far off, Baral said the electronic databases that hospitals use are administrative in purpose, meant for billing, resource management, et cetera. ‘They were not designed to infer the prevalence and severity of an infectious virus.’ We have a desire for instant, accurate data, he said, but validation takes time.

So in essence — resource allocation decisions having been made — we’ve engineered EHR data systems to kill us for profit, right? Sounds about right (and see under “Health Care,” below). Interesting article, but read with care.

Face masks effectively limit the probability of SARS-CoV-2 transmission Science. From the Abstract: “We show that variations in mask efficacy can be explained by different regimes of virus abundance and related to population-average infection probability and reproduction number. For SARS-CoV-2, the viral load of infectious individuals can vary by orders of magnitude. We find that most environments and contacts are under conditions of low virus abundance (virus-limited) where surgical masks are effective at preventing virus spread. More advanced masks and other protective equipment are required in potentially virus-rich indoor environments including medical centers and hospitals. Masks are particularly effective in combination with other preventive measures like ventilation and didzstancing.” “[P]otentially virus-rich indoor environments including” is deftly worded. It’s not that Aerosol Generating Procedures (AGPs) indoors in hospitals are not sources of aerosols; it’s that AGPs are not the only source of aerosols (and indeed shouting, singing, talking, and breathing are the most important sources in real-world crowded, close-contact, closed environments, as the epidemiology consistently shows).

Vaccines’ success could undercut Biden’s multibillion-dollar school testing plans Politico. Sniffer dogs would be ideal for school districts but whatever.

Covid: Sniffer dogs could bolster screening at airports BBC. Use the dogs for mass screening, sort the false positives. This is not hard.

Readers know my priors, so:

How I feel about our current precarious pandemic situation. Some wealthy countries think they got it under control… for now… what could possibly go wrong? 🤷🏻‍♂️ #COVID19 pic.twitter.com/yHGc8wgnr3

Duterte’s daughter Sara in focus as his presidency winds down Nikkei Asian Review. Another dynasty.

Hamas claims victory even as Gaza lies in ruins FT

Israel: Is this the beginning of the end of apartheid? Middle East Eye (nvl).

The BBI Judgment and the Invention of Kenya Verfassungsblog

Revealed: Third of British cabinet, including Boris Johnson, has been funded by Israel or pro-Israel lobby groups Declassified UK

Headlines today full of good news stories, while experts are seriously worried about what's happening. Only 30% of our population are fully vaccinated. We're being fed 'hopium' and spin while we are herded into yet another devastating wave.https://t.co/H6Sfb4pxxN

Minutes to touchdown: the moment a Belarusian dissident knew his time was up Reuters. Not like there isn’t a precedent.

Opinion: Russia’s attack on U.S. media has become a test case Editorial Board, WaPo. “That makes [Radio Free Europe/Radio Liberty] a test case of whether independent journalism can survive in Russia.”

What Is Russia Doing in the Black Sea? Carnegie Endowment for International Peace

Key progressive initiatives stall in Congress as some on the left urge Biden to go bold, and go alone CNN

By singling out Dominion, the GOP has successfully deflected from legitimate election-security concerns involving America’s largest voting machine vendor, ES&S. Jennifer Cohn. I hate to keep harping on this, but if Arizona’s election officials had used hand-marked paper ballots, hand-counted in public, the Maricopa recounting process would have consisted of… simply counting the paper ballots again.

Rather like billing the family for the executioner’s bullet:

I honest-to-god got a bill for the EMTs telling me my son was dead. This is just among the zillion goddamn reasons we need universal healthcare 😖 pic.twitter.com/igkHEW8gP3

Groundbreaking Smart Toilet takes photos of your poo to send to doctors for analysis Daily Star (Re Silc).

At first glance, a Chinese instruction manual of some kind.

But look closely: everything here – every single word without exception – is in English.

This is An Introduction to Square Word Calligraphy, a livre d'artiste by the acclaimed Chinese contemporary artist Xu Bing. 1/7 pic.twitter.com/YvwIqgnYNn

Lateral Reading: Reading Less and Learning More When Evaluating Digital Information SSRN. “To investigate how people determine the credibility of digital information, we sampled 45 individuals: 10 Ph.D. historians, 10 professional fact checkers, and 25 Stanford University undergraduates. We observed them as they evaluated live websites and searched for information on social and political issues. Historians and students often fell victim to easily manipulated features of websites, such as official-looking logos and domain names. They read vertically, staying within a website to evaluate its reliability. In contrast, fact checkers read laterally, leaving a site after a quick scan and opening up new browser tabs in order to judge the credibility of the original site. Compared to the other groups, fact checkers arrived at more warranted conclusions in a fraction of the time.” Lateral reading is what we do…. .

Karl Marx and Milton Friedman: What They Got Right The Globalist

Capitalism and Identity: A Review of Ashley J. Bohrer’s ‘Marxism and Intersectionality’ Hampton Institute. Dense but good. If this is the vineyard in which you are laboring, it’s a must-read.

Want to “Be Your Own Boss”? Democratic Socialism Is for You. Jacobin 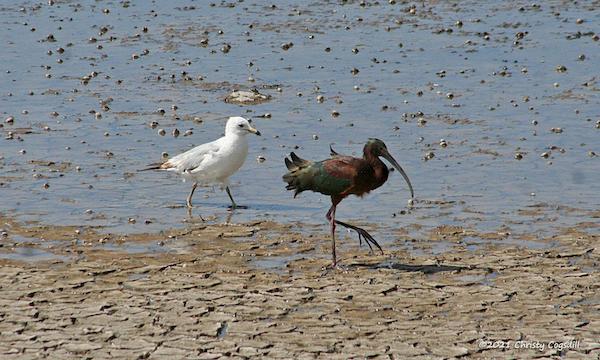 Crittermom writes: “After dropping my puppy at the vets (an hour away) for the day, I ventured a mile down the road to a small lake that was being drained, after reading about it and the bird activity as a result. There were at least three dozen White-faced Ibis, three Avocets, and this lone seagull who seemed to prefer hanging out with the Ibis, as it joined one for a stroll along the shore.”