Yves here. It isn’t a far reach to argue that the creation over the last 20 or so years of a stronger surveillance and control apparatus is part of a long-term plan, above all to protect the powerful and rich. Remember, for instance, that in the early 2000s, Pentagon strategists were warning of coming destabilizing mass migrations, triggered by climate change.

However, having lived in NYC during Hurricane Sandy, I need to correct part of his post. First, the dark zone in Manhattan was roughly 38th Street and further south. Able body people were hiking far enough above that to get provisions and charge their phones (the officialdom also had outposts in the dark zone where they were handing out water, and there were formal and informal efforts to get food to those who couldn’t climb up and down stairs). Second, the now famous Nathan Tankus lived in what is called a limited equity residential complex in Chelsea (what amounts to affordable housing; these buildings have a ten year waiting list), which roughly extends from Eight to Ninth Avenue around 28th Street. They also had their own generator.

Admittedly, it is correct to say that Goldman’s building was the only high rise in the lower Midtown/lower Manhattan to be “lights on” during Sandy, but the article gives the impression that the blackout was more extensive than it was. 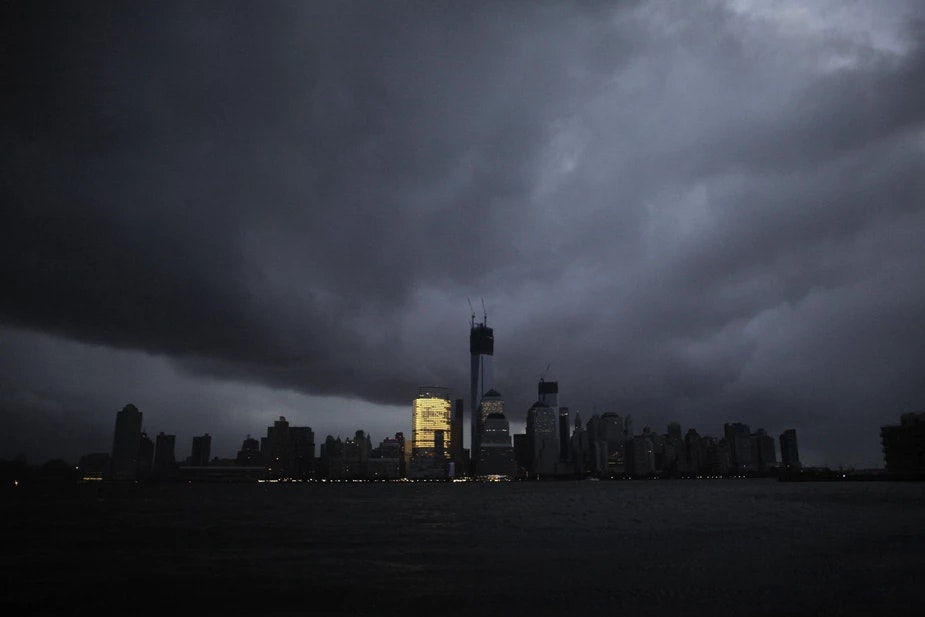 Goldman Sachs, the only living building in New York City during Hurricane Sandy, 2012.

On a Fourth of July when Americans still celebrate an expansive idea of freedom (i.e., that freedom is meant for everyone), I offer this, a glimpse of the world being built in front of our eyes, the view from a window on that coming day when the only freedom celebrated on Fourth of July will be the freedom of the super-rich from the suffering rest of us.

The quote below is from a good and much longer piece published in Australia titled “How The Rich Plan to Rule a Burning Planet.” I’ll have more on this topic in future work.

For now, though, give this a read. It’s from the middle of the essay.

In the years since the 11 September 2001 terrorist attacks, Western governments have expanded and strengthened the state’s repressive apparatus. Today we’re seeing, as many predicted, how the crackdown on basic freedoms carried out in the name of the “war on terror” has created a new normal in which anyone opposing the government’s agenda becomes a target. Environmental protesters, and anyone else standing up against the destructive neoliberal order, are now firmly in their sights.

In the US, the battle to halt the construction of the Dakota Access oil pipeline provides the most extreme example to date. In November 2016, the Native American blockade at Standing Rock was broken up by a police operation so heavily militarised that it looked like something out of the invasion of Iraq. In sub-zero temperatures, blockaders were attacked with water cannons, tear gas, rubber bullets and concussion grenades. Hundreds were injured and many hospitalised. Two women who were involved in the blockade and who later vandalised the pipeline are now facing charges under which they could be jailed for up to 110 years.

In Australia, we’ve seen those protesting peacefully outside the International Resources and Mining Conference in Melbourne face an unusual level of police violence and mass arrests. In Queensland, the state Labor government has passed new laws targeting environmental activists. In early December, three members of Extinction Rebellion were jailed when a magistrate refused them bail – something without precedent for charges related to acts of non-violent civil disobedience.

Perhaps nothing provides a better metaphor for the future our leaders are steering us toward than a picture, taken during Hurricane Sandy in 2012, of the New York city skyline shrouded in the darkness of a blackout – all except one building, which remained lit up like a Christmas tree. That building was the headquarters of global banking giant Goldman Sachs, where, protected by a mountain of sandbags and using a back-up generator, the company was able to keep the lights on and the profits flowing even while the city was inundated by a three-metre storm surge and hospitals, schools, the subway and most other services were forced to close.

If you imagine this picture as the world, and the Goldman Sachs building as the gilded realm inhabited by the world’s super-rich and the political class that serve them, all you’d need to add is some heavily armed guards around the building and you’d get a pretty good sense of what’s ahead. Our rulers’ apparent lack of concern about climate change is a ruse. They hope that, if they can just head off dissent for long enough, they will succeed in building this future, brick by brutal brick, and there will be nothing the rest of us can do about it.

As the so-far-inevitable climate future unfolds, imagine the image at the top of this piece as the world. If you do, the Goldman Sachs building, as the writer says, looks like a “gilded realm inhabited by the world’s super-rich and the political class that serve them. All you’d need to add is some heavily armed guards around the building and you’d get a pretty good sense of what’s ahead.”

What’s ahead is, sadly, a world of abandonment — ours, by our rulers.

We’ve seen this world already, the one with the guards, the banks and the abandonment, during the Occupy Wall Street intrusion on public order. 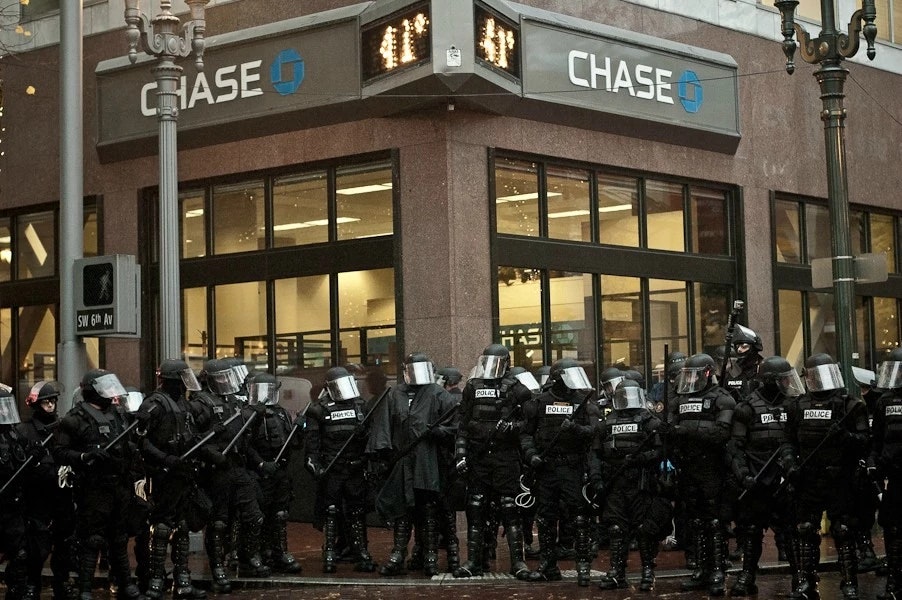 That’s a lot of storm troopers for just one bank, and that one is only a branch, a small one at that. This is how frightened the world of wealth became that banks would be stormed, and this is how forcefully they mean to protect that world.

Planning the Disaster In Plain Sight

To keep things simple and (should it need saying) obvious: If the super-rich, those who own and control most first-world governments and many second-world ones, had ever planned to save our species from the coming climate catastrophe, they would be doing so now, and we would be watching them do it.

Instead, we’re seeing the opposite. They’re building highly militarized “security” states even in democracies, states that can and will protect only wealth from the millions — and later, the billions — of refugees their deliberate and obvious policies will create.

What they do plan to do instead is save themselves.

If I Were King…

If I were running that operation (I’m not), the one that transitions the world from wealth-controlled relative peace to wealth-protected global chaos, I’d have only one goal — keep the masses of people silent and complacent until nothing can be done to stop the separation of their small, energy-rich world from the larger, poorer world of the rest of us.

The story of how that will occur, the phases this project will go through, are the subjects of later work. But for now, suffice it to say, believe your eyes. The security state — the one that keeps them safe — is nearly complete. They’re building it in front of us.

The rejection of any climate plan that doesn’t, have as its only goal, keeping the wealth of the world in the hands of those who hold it happens each day, again, in front of us.

And the health care that Americans, in increasingly greater numbers, will desperately need in a world gone increasingly mad and dangerous — that’s never going to happen. Even the Democrats, as they are currently led, hate you for wanting it — it would be so much better for them if you’d just settle for Obamacare, Medicare For All’s weak and disabled sister, and be done with it.

The Message for This Fourth

So the message for this Fourth of July: Let’s celebrate the amount of freedom we have while we have it. And if it seems like not too much trouble, let’s fight to keep it. If our rulers don’t have our best interest in their hearts, why should we have theirs in ours?