Yves here. I am old enough to remember the days when most cities of any size had morning and evening newspapers. My earliest jobs were for the Dayton Daily News, first by having a paper route, and later by selling subscriptions door to door.

This article serves to confirm what we’ve repeatedly said, that what killed local newspapers was Craigslist. Classified ads were half the revenues of the typical local paper. Yes, Google and Facebook eating up online ads made a bad situation much worse, but newspapers were already on the ropes. And the hollowing out of reporting followed fast.

Newspapers advertising revenues have declined steadily over the past decades due to competition from online platforms. But what are the implications of this trend for the organisation and content of newspapers and for information local readers are exposed to? To shed light on these questions this column looks at the staggered introduction of Craigslist – the world’s largest platform for classified ads – in the US. It finds that the entry of Craigslist in a market led to considerable staff cuts by local newspapers, a decline in news coverage of politics, and a drop in readership. These changes also had electoral consequences, favouring partisan voting and ideologically extreme candidates.

The internet has profoundly changed the environment in which traditional media operate. In particular, over the past decades, competition from online platforms has contributed to the sharp decline in newspapers’ advertising revenues,1 forcing many outlets to drastically rethink their business model and organisation. How these changes affect news reporting, and, ultimately, the ability of local newspapers to inform citizens about political matters, is a question of paramount importance for the future of journalism and for democratic politics (Angelucci et al. 2021).

Yet, rigorous evidence on this issue is scant, mainly due to the difficulty of separating the effect of online competition from other technological and socio-economic changes brought about by the internet, which may affect the newspaper market in other ways.

To try to fill this gap, we study the impact on US newspapers of the introduction of Craigslist, the world’s largest online platform for classified advertising, which disrupted this formerly lucrative niche for many newspapers (Djourelova et al. 2021).2 Combining information on the staggered expansion of Craigslist across US counties between 1995 and 2009 with comprehensive data on over 1,500 US daily newspapers, we examine how the entry of a local Craigslist website, and the subsequent decline in local newspapers’ advertising revenues (Seamans and Zhu 2014), affected their organisation, editorial decisions, and news content, as well as the political implications of these changes.

The introduction of Craigslist provides a suitable testing ground for these questions for several reasons. First, its staggered expansion across the US over a 15-year period (Figure 1), combined with the limited geographic scope of each local Craigslist website, generates significant variation over time and across space in the degree of online competition for classified ads faced by local newspapers. 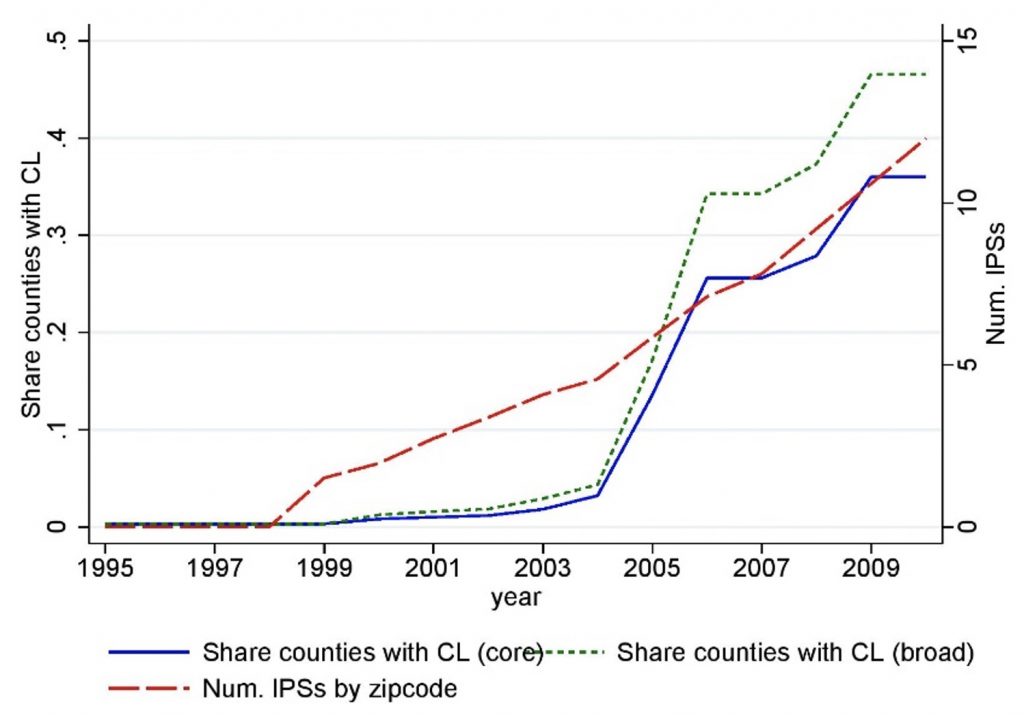 Second, since Craigslist websites do not feature news content or display advertising, its entry represents a specific shock to one source of revenue but leaves other market conditions unaffected.

Finally, ads on Craigslist are largely free of charge, and most local websites do not generate profits for the company. The lack of a clear profit maximisation strategy alleviates concerns that the timing of Craigslist’s entry might have been driven by strategic considerations related to the conditions of local newspaper markets.

Our empirical strategy is based on comparing the evolution of the outcomes of interest between areas served versus not served by a local Craigslist website, before and after its entry, controlling for population, the quality of local broadband internet, and a range of demographic and socioeconomic conditions.3

In addition, since the entry of Craigslist had a bigger impact on newspapers that depended more heavily on classified ads, we exploit variation across newspapers – including those in the same state or media market – in the extent to which they relied on classified ads at baseline. We proxy this reliance by the presence of a manager dedicated to classified ads.4

We find that the entry of Craigslist does not significantly affect the number of active local newspapers. Yet, following the opening of a local Craigslist website in a county, local newspapers cut staff by about 6% relative to the average number of jobs. Figure 2 depicts the dynamics of this effect by means of an event study around the time of entry. 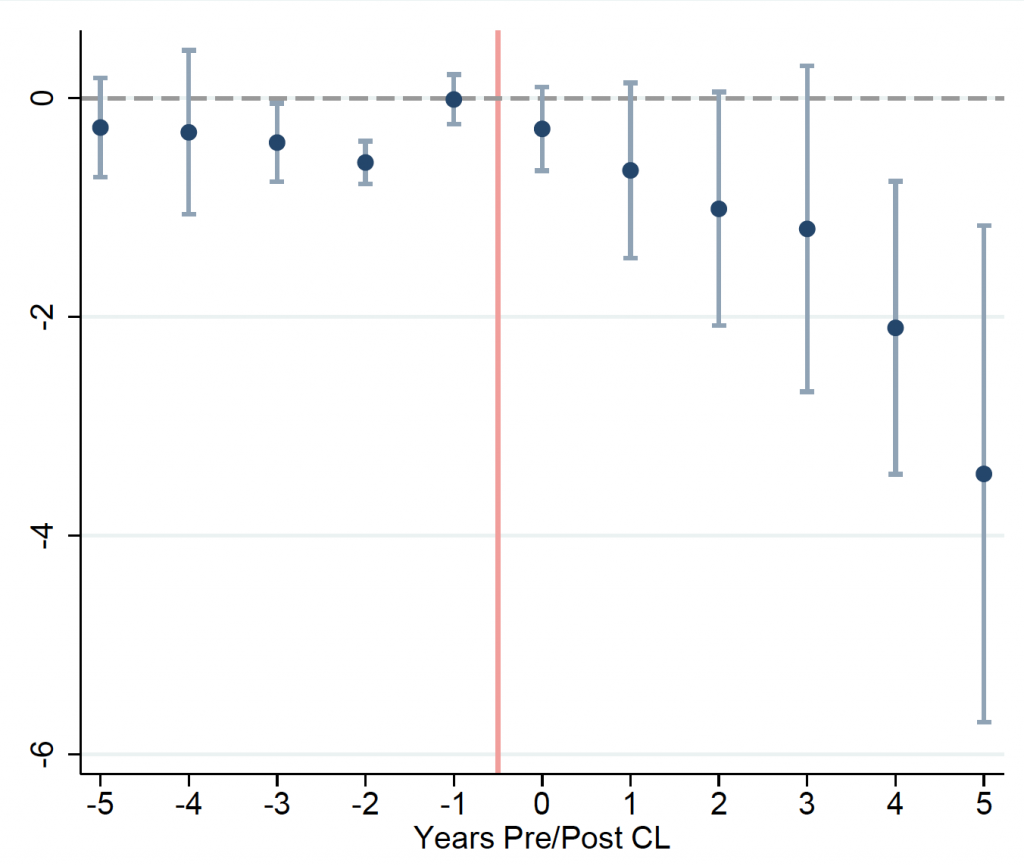 The effect is driven by newspapers that relied more heavily on classified ads at baseline, for which such cuts amount to 14% of the mean. Staff cuts affect both managerial and editorial positions. Cuts in editorial staff appear to disproportionately affect editors responsible for the coverage of politics, leaving other areas such as sports and entertainment largely unaffected.

We then test how these organisational changes affected newspapers’ editorial priorities, with particular regard to the news coverage of politics. First, applying keyword searches to the entire corpus of articles accessible for over 800 newspapers in our sample, we compute the number of articles that mention the names of local Congressional representatives.

We find that, following the entry of Craigslist in a given area, news coverage of local representatives declined significantly in papers with dedicated classified ad managers compared to those without, by a magnitude of about 30%. Interestingly, we do not find evidence of a similar decline for national politicians.

To complement this approach, we estimate a semi-supervised topic model on a random sample of two million articles and find evidence of a decline in the probability that articles published by affected newspapers relate to politics. We find no significant effect on other topics such as sport, entertainment, or crime (Figure 3).

Figure 3 Impact of Craigslist’s entry on content, comparing newspapers with vs without classified manager at baseline 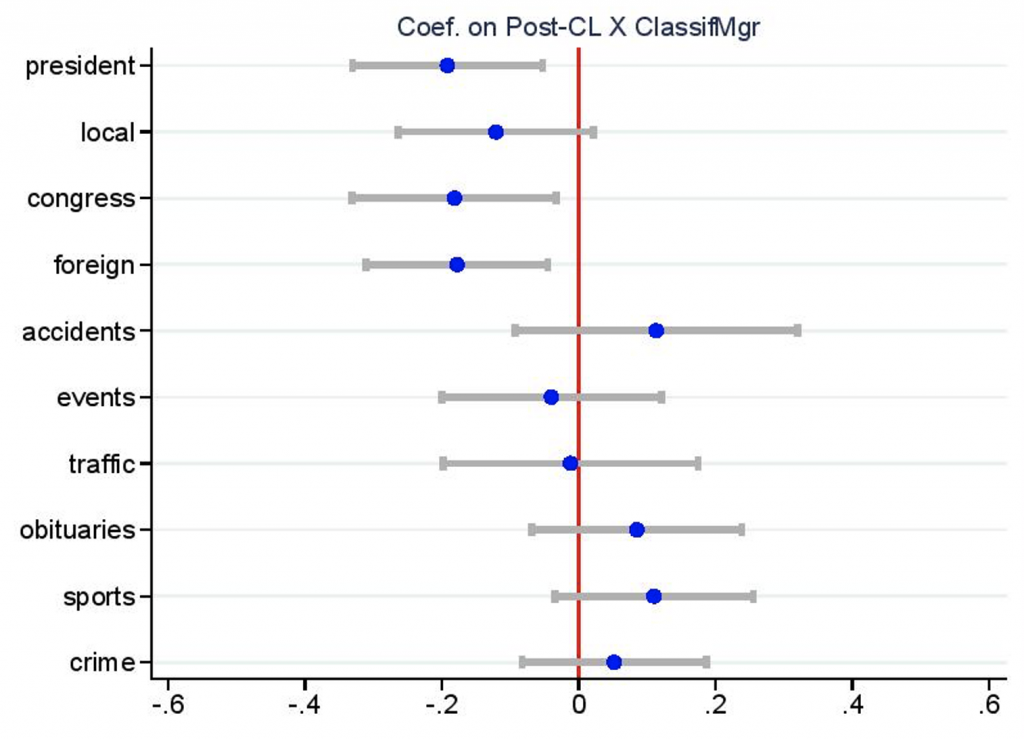 Next, we examine how readers respond to these changes in content. Using data on circulation, we document that, in the years after the entry of Craigslist, local newspapers experienced a sharp decline in readership (Figure 4). 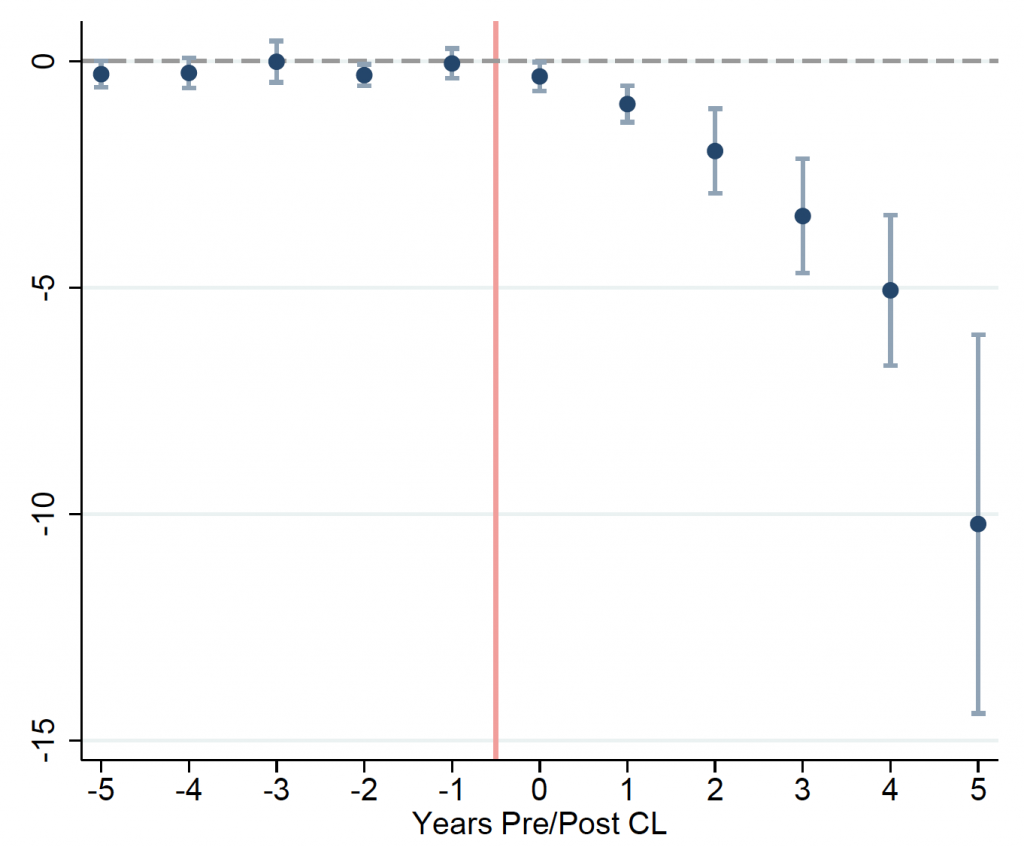 We further explore this aspect using data from two large-scale surveys on media consumption. The results confirm that, following the entry of Craigslist in an area, local respondents are less likely to report reading a (non-national) newspaper. Interestingly, this trend is primarily driven by individuals that are relatively less likely to be interested in classified ads and therefore cannot be merely due to lower demand for print ads.

Crucially, evidence from both survey and browsing data suggests that the decline in newspaper readership is not compensated by increased news consumption online or through other sources (i.e. national papers, radio, or TV). It is hence likely to result in individuals being generally less informed about politics.

Finally, we study how reduced news coverage and awareness of politics affect the electoral choices of local voters. We find that the entry of Craigslist favoured ideologically extreme candidates and reduced the probability that voters support different parties in concurrent elections (split-ticket voting).

These findings are consistent with the view that as less information about local politicians becomes available, voters tend to rely more heavily on partisan cues, which are shaped primarily by the national political debate (Darr et al. 2018, Moskowitz 2021, Trussler 2020).

Taken together, our results indicate that the impoverishment of local newspapers due to competition from online platforms can jeopardise their ability to inform citizens about politics, with potentially detrimental effects for ideological polarisation.5 This evidence supports the concerns expressed by some regulators that newspapers’ financial distress, due to lower advertising revenues, may threaten quality reporting and pluralism (FCC 2016).