Yves here. Both Richard Murphy and the Financial Times were puzzled by the apparent fall in Covid cases after Boris Johnson’s much criticized July 19 “Freedom Day,” when most Covid restrictions ended. Even the Government was cautious about declaring victory prematurely.

We pointed out the real test of whether the decline was some sort of anomaly would be whether Covid deaths fell, and that’s a lagging indicator. Murphy argued that there were several reasons, starting with the pingdemic, why actual Covid cases might not be reported right now.

Murphy has a new observation: many are still acting as if the lockdown rules are largely or entirely in place. This is the opposite of what happened in the US when the Administration declared “Mission Accomplished” and effectively ended masking by saying the vaccinated no longer needed to bother, and making sure the data supported their action by not tracking Covid cases among the vaccinated. We know how well that is working out.

July 19 was meant to be Freedom Day. Entirely rationally, given my age, I decided it was the exact opposite and as a result have increased my measures to reduce exposure to Covid as a result of the end of many restrictions. I know many who have done the same.

I now note that those of us doing so are not isolated examples. This is from the Politico email this morning (which is worth subscribing to): 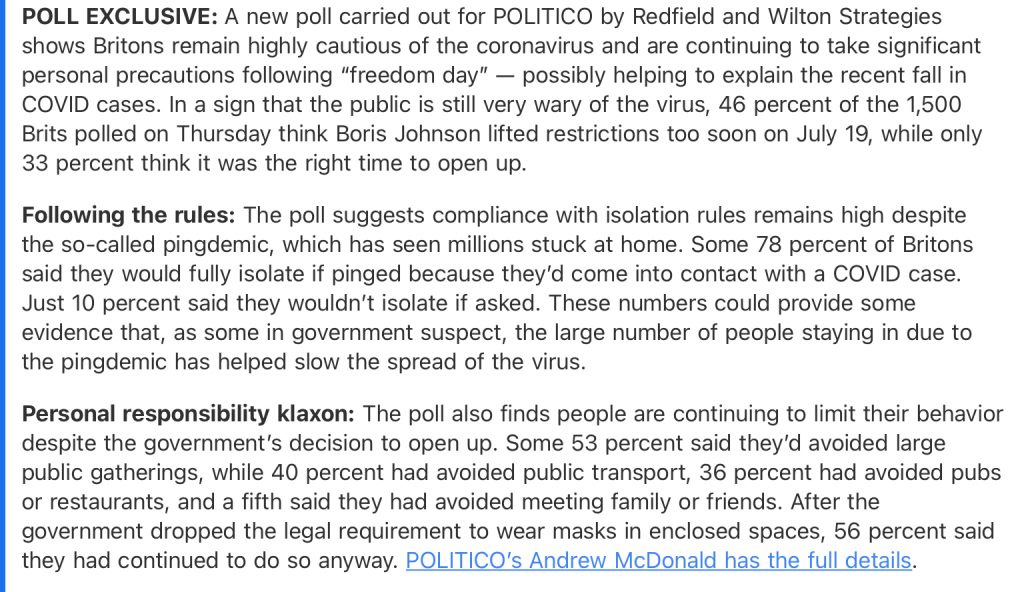 There has been bafflement as to falling case numbers (which are now increasing again). Much of that looks to be down to reduced testing, motivated by the start of the English school holidays. But voluntary lockdown seems to be another factor to me. People are still, quite reasonably, isolating. They have more sense than this government, which is a cause for hope.