Yves apologizes for the dearth of original posts. Rehab, her mother in the hospital, and Naked Capitalism add up to 36 hours a day with 24 available, and something had to give. –lambert

Farmland Investing: Impact Beyond Returns Worth

If enough heat and smoke rise rapidly into the atmosphere, they form massive, tempestuous pyrocumulonimbus clouds that shoot lightning and scatter embers, igniting even more fires.

This is happening right now in British Columbia. pic.twitter.com/HFmxBvCey8

“In a new study, National Institutes of Health researchers report that the prevalence of COVID-19 in the United States during spring and summer of 2020 far exceeded the known number of cases and that infection affected the country unevenly. For every diagnosed COVID-19 case in this time frame, the researchers estimate that there were 4.8 undiagnosed cases, representing an additional 16.8 million cases by July alone. The team’s analysis of blood samples from people who did not have a previously diagnosed SARS-CoV-2 infection, along with socioeconomic, health, and demographic data, offers insight into the undetected spread of the virus and subgroup vulnerability to undiagnosed infection…. “The estimate of COVID-19 cases in the United States in mid-July 2020, 3 million in a population of 330 million, should be revised upwards by almost 20 million when the percent of asymptomatic positive results is included,” said senior co-author Kaitlyn Sadtler, Ph.D., chief of the NIBIB Section on Immunoengineering. “This wide gap between the known cases at the time and these asymptomatic infections has implications not only for retrospectively understanding this pandemic, but future pandemic preparedness.”

Pleasingly understated. We seem to make making the same mistake, if mistake it be, all over again by refusing to track asymptomatic breakthrough infections in the vaccinated.

Ivermectin as an adjunct treatment for hospitalized adult COVID-19 patients: A randomized multi-center clinical trial Shakhsi Niaee M, Namdar P, Allami A, Zolghadr L, Javadi A, Karampour A, et al., Asian Pacific Journal of Tropical Medicine (Hainan Medical University; peer-reviewed; Wolters-Kluwer. Iranian authors). From the Conclusions: “Ivermectin as an adjunct reduces the rate of mortality, time of low O2 saturation, and duration of hospitalization in adult COVID-19 patients. The improvement of other clinical parameters shows that ivermectin, with a wide margin of safety, had a high therapeutic effect on COVID-19.” Lambert here: Given that SARS-CoV-2 mutates, I don’t see how “living with it” is possible without well-understood treatment, making it all the more curious that our public health establishment is fighting treatment candidates (underline “candidates”) like Ivermectin tooth and nail. Shouldn’t they be overjoyed that people who are sick could be given a fighting chance?

* * *
Ultrapotent antibodies against diverse and highly transmissible SARS-CoV-2 variants Science. From the Discussion: “Our results show that highly potent neutralizing antibodies with activity against VOCs was present in at least 3 of 4 convalescent subjects who had been infected with ancestral variants of SARS-CoV-2 (Figs. 1 and 2 and figs. S3 and S10). Furthermore, our structural analyses, the relative paucity of potential escape variants in the GSAID genome database, the identification of public clonotypes (27, 28) and the fact that each subject had mild to moderate illness all suggest that these antibodies were generated in subjects who rapidly controlled their infection and were not likely to have been generated due to the generation of a E484 escape mutation during the course of illness. Taken together, these data establish the rationale for a vaccine boosting regimen that may be used to selectively induce immune responses that increase the breadth and potency of antibodies targeting specific RBD regions of the spike glycoprotein….” I’m not sure what “vaccine boosting regimen” means. Plasma?

Accelerating the evolution of SARS-CoV-2 – a risk of combining dexamethasone and tocilizumab for severe COVID-19 (accepted manuscript) Journal of Infectious Disease. From the Abstract: “Generating a pool of hosts with genetically diverse viral populations while introducing new selective pressures in the form of vaccination-induced immunity, could accelerate the process of antigenic drift in SARS-CoV-2. However, clinical trials to date have largely disregarded viral outcomes, and data on viral kinetics in response to immunomodulation is scarce. Co-administration of antiviral agents with immunomodulation could serve as a potential strategy to aid viral clearance and reduce the risk of genetic diversification.”

Millions to get THIRD Covid vaccine from September: Up to 32million over-50s, key workers and Brits with underlying health conditions will be double-jabbed with flu and booster coronavirus vaccine Daily Mail (nvl).

* * *
Experts question if WHO should lead pandemic origins probe AP. Jeffrey Sachs: “The idea that China was behaving badly is already the wrong premise for this investigation to start. If lab work was somehow responsible (for the pandemic), the likelihood that it was both the U.S. and China working together on a scientific initiative is very high.”

The Case Against the Covid-19 Lab Leak Theory Lindsay Beyerstein, The New Republic

* * *
Report Shows that N.C. K-12 Schools Reopened Safely, Paving the Way for Schools Nationwide to Limit COVID-19 Spread in the Classroom Duke Health. Good news, or would be if the Biden administration and Walensky hadn’t wussed out on masking.

The newest MAGA app is tied to a Bannon-allied Chinese billionaire South China Morning Post (which has a “content partnership” with Politico (!)).

Private Equity Gears Up for the Siege of Japan Inc. WSJ

In Myanmar’s cities, towns and villages, another day of protests against military rule #WhatsHappeningInMyanmar pic.twitter.com/XZwDrMwN8L

Heroic, given the circumstances; these are not people with “In this house….” signs on their front lawns. (Interestingly, from a Korean photographer.)

How palm oil became the world’s most hated, most used fat source The Counter

Don’t Allow Another U.S.-NATO Libya in the Horn of Africa Black Agenda Report (Re Silc).

‘Unlike anything I’ve seen at the FTC’: Biden’s chair makes her public debut Politico. The deck: “Under Biden nominee Lina Khan, the agency met in public for the first time in decades — and split along party lines on an aggressive enforcement agenda.”

US to share tens of millions more Covid-19 vaccines this summer CNN. Molasses for brains.

Tax fraud charges: The pressure’s on Allen Weisselberg to flip on Donald Trump USA Today. I know this is the genetic fallacy, but we’ve heard “the walls are closing in!” so many times before, from the same people, with the same intensity, with the same incentives. I think I will wait for some serious analysis from a tax expert. Here is the indictment. It took awhile to find Weisselberg’s lawyer: Alan Futerfas (more; more).

The case against Trump’s company: ‘smoking gun’ or ‘nothingburger’? FT. “[S]ome experienced defence lawyers, who declined to speak publicly, were underwhelmed by the much-anticipated charges. ‘I realise that fringe benefits add up over 15 years but this is just part of the American fabric,’ said one, concluding: ‘If this is an attempt to flip Weisselberg — and they can’t make a secondary case without flipping him — that’s deeply problematic.'” I’m really quoting this because “part of the American fabric” is so, so good.

The Alzheimer’s enigma: Why is the incidence falling at 16% a decade in the world’s richest countries? El Pais

Is your friend an extremist? Facebook is asking some users about exposure to content. USA Today. “You may have been exposed to harmful extremist content recently.” “Extremist” is such a useful word. So is “exposed.” Categorizing political differences in terms of contamination and disease always ends well. Anyhow, as long as Facebook can roll out functionality like this, its monopoly is surely safe. So there’s a bright side.

A new form of the revolving door:

She was an intelligence analyst at the CIA. Now she writes about the dangers of ‘fake news.’ – New column by ⁦@alanmillerNLP⁩ via ⁦@Poynter⁩ https://t.co/fgoufPjnEE

Sort of amazing, but not, that Sullivan presents this without comment, but that is where we are.

What happens in Vegas is not covered in Vegas:

As hospitals in Las Vegas full up with COVID patients again, and the area leads the nation in cases, COVID is completely absent from the front page of the state’s biggest newspaper. It’s barely mentioned on TV news. No wonder elected officials are doing nothing: zero pressure pic.twitter.com/yuY22gEMjy

Ok my expectations were rock-bottom and I’d love to drag Xiaomi on this because…I mean…come on, it’s like a BLM exhibit by Taser, but anyway, they actually did a really good job on this booth, very engaging. Check out the video.#OPSEC #Infosec https://t.co/E07pNZrbWR

If you stay in hotels a lot, one of those detectors might come in handy. Sounds like an arms race, though.

Pioneering female pilot will fly to space at age 82 on 1st crewed Blue Origin flight ABC. So awesomely performative, it makes up for everything else Bezos has done.

Richard Branson poised to beat Jeff Bezos into space FT. Are we letting them come back? Why?

Did the Supreme Court gut voting rights or back election security? The Narratives Project 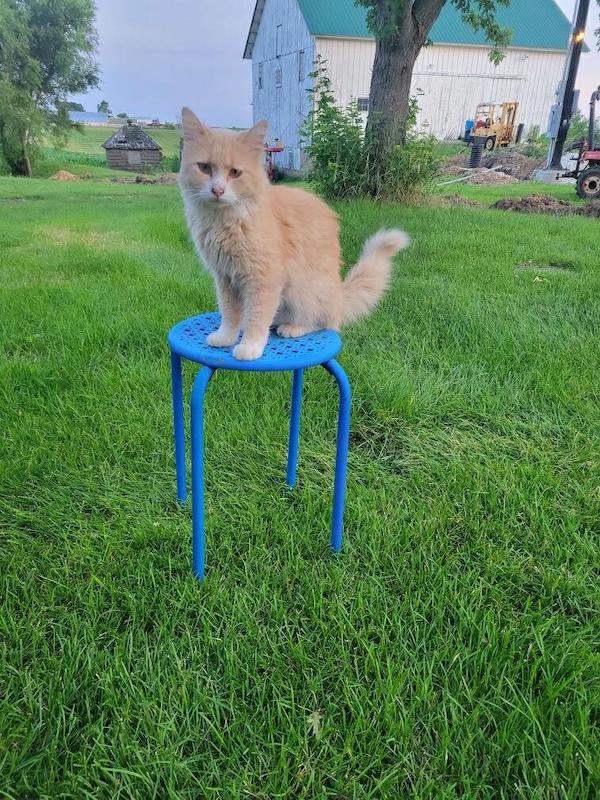 TK writes: “This is Puff, the yard patrol officer on my brother’s farm in Iowa. Don’t be fooled, he’s ferocious.” Ferocious, besides being cool.