Yves here. VoxEU regularly runs research that demonstrates the long tail of historical events. One has to wonder what the causal link is between slower economic development and religious tolerance v. persecution. While it’s easy to see deeply religious areas as conservative and therefore resistant to change, the authors put weight on the idea that persecution weakened trust.

Throughout history, religion has influenced growth and per capita output, and its effects are felt even in modern times. This column investigates the effect of one of history’s longest-running and most intrusive forms of religious persecution – the Spanish Inquisition. In areas without measured persecution, annual GDP per capita is significantly higher than in areas where the Inquisition was most active. Local levels of persecution continue to influence economic activity and basic attitudes some 200 years after the abolition of the Inquisition, undermining trust, reducing investments in human capital, and impoverishing hardest-hit areas.

In Monty Python’s famous sketch, “nobody expects the Spanish Inquisition” – an institution so brutally backwards, so anachronistically cruel that it can only serve as a butt for jokes. While Western audiences today may chuckle, religion was no laughing matter to rulers for most of human history; from the days of Nero to North Korea today, religious persecution has been frequent and often severe. Johnson and Koyama (2019) recently argued that religious freedom only emerged once rulers could be legitimate without being divine or heads of the church. What are the economic consequences of religious persecution?

A rich tradition in economics, going back to the work of Max Weber, has already investigated how religion can influence growth and per capita output. Recent research in the economics of religion has increasingly married micro-data with rigorous quantitative analysis: while Cantoni (2015) showed that Protestant areas of Germany did not outperform after the Reformation, Becker and Woessmann’s work (2009) demonstrated that Protestant areas of Prussia were richer largely because education levels were higher. Squicciarini (2020) has recently found that Catholic areas of France only began to lag during the Second Industrial Revolution when human capital grew in importance.

The effects of religious persecution are less clear. While the expulsion of economically useful minorities cast a shadow and Chinese persecution of intellectuals may have reduced human capital accumulation (Koyama and Xue 2015), reducing population pressure in other settings may have been beneficial (Chaney and Hornbeck 2016). Becker et al. (2021) examine whether the ban on book printing in Catholic areas during the Renaissance was economically harmful, and Hornung (2014) demonstrated that Huguenot emigrants from France provided a boost to Prussian growth.

In our recent paper (Drelichman et al. 2021), we investigate the effect of one of history’s longest-running and most intrusive forms of religious persecution. The Spanish Inquisition was founded in 1478 and operated until 1834. It aimed to root out all manners of heresy, from crypto-Judaism to sorcery, from blasphemy to sodomy, from the possession of forbidden books to hiding a wanted person, and a whole range of other behaviours and beliefs in between. It persecuted tens of thousands of Spaniards and foreigners, handing out sentences ranging from mild punishments like imprisonment to spectacular public executions. It had the rank of Crown ministry – notably independent from the ecclesiastical hierarchy – and financed its operations from the fines and confiscations it imposed.

Denunciations were the fuel on which the Inquisition ran. Neighbours, business partners, family members, and local notables were essential to identify potential targets. Those accused of major heresies were often subjected to torture. The modus operandi of the Inquisition created strong incentives to limit social interactions to a close circle of friends and family; its focus on persecuting new ideas and its incentive to persecute wealthy citizens to self-finance discouraged entrepreneurship, education, and innovation.

To examine the long-run impact of the Inquisition, we construct a new, comprehensive database of the geography of religious persecution in Spain for the entire duration of the Inquisition’s operation. While many of the rich files on local trials have been lost, Inquisition tribunals sent annual summaries to Madrid between 1540 and 1700, which have largely survived. As part of a collaboration with the Early Modern Inquisition Database, we digitised the universe of these records and merged them with existing secondary sources to obtain over 67,000 trial observations.

We then geo-reference the location of persecution – either the accused’s place of birth, his or her place of residence, or the location where the offence was recorded. We measure the Inquisition’s impact as the proportion of years during which a trial was initiated against at least one member of the community.

Figure 1 shows a map of the Inquisition’s local impact. The geography of religious persecution in Spain reveals sharp differences, often over short distances – but not a clear North-South gradient. Notes: The map gives values for inquisitorial intensity by municipality, for the period 1478–1834. Intensity is defined as the number of years a municipality experienced at least one inquisition trial divided by the number of years for which municipality-level data is available. The largely white area in the Northwest – the tribunal of Valladolid – is the result of unusually high levels of missing data, and not of lower persecution. Source: Drelichman et al. 2021.

In order to measure the economic impact of the Inquisition on today’s world, we turn to nightlight. Reliable measures of GDP at the local level only exist for municipalities with over 1,000 residents (25% of all municipalities). Estimates for smaller towns, based on income tax receipts, are unreliable because of widespread tax avoidance (Domínguez Barrero et al. 2014). We therefore estimate the relationship between nightlight and GDP for the larger municipalities and then extrapolate to the rest. 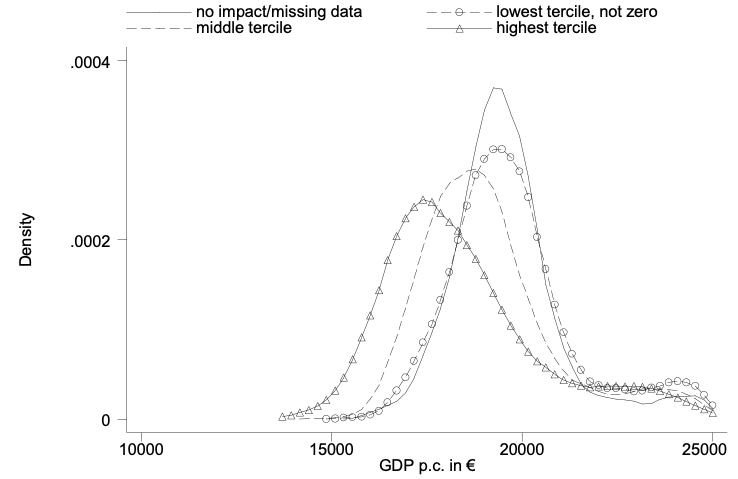 Why does the Inquisition cast such a dark shadow over economic performance – even today? We use data from the barometer surveys conducted by the Spanish Centre for Sociological Research (CIS). On average, areas that suffered more from religious persecution are today more religious and less educated, and they exhibit less generalised trust. The adverse impact on output, education, and trust is robust to a wide variety of additional controls.

To account for the possibility that the Inquisition targeted poorer, more religious, and less educated areas to begin with, we use three strategies. First, we form comparison groups of closely-matched municipalities with near-identical characteristics; we still find consistent, large differences between those that suffered more and those that suffered less religious persecution.

Second, we show that municipalities that attracted larger inquisitorial activity were less likely to produce prominent religious figures. Finally, we use data on the presence of early modern hospitals as proxies for wealth and social capital to show that the Inquisition was more active in richer areas (which is also consistent with the Inquisition’s need to self-finance). 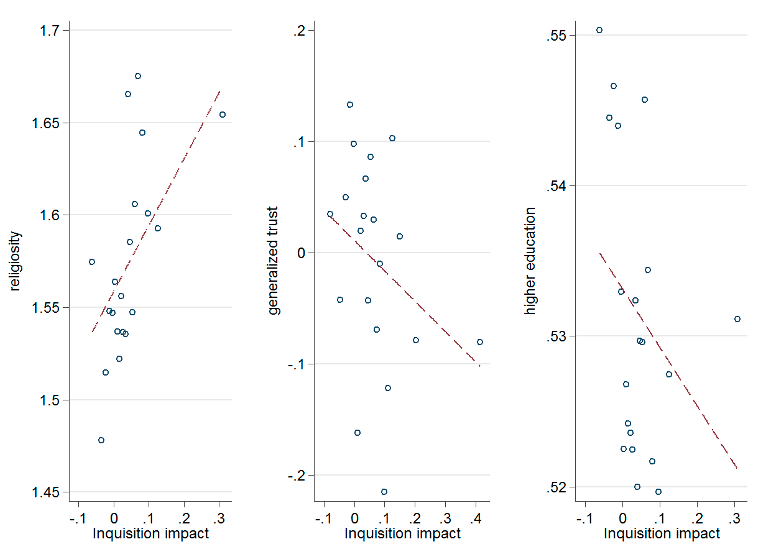 The Inquisition’s persecution of perceived heretics is only one example of authoritarian intervention in people’s private lives; other institutions, such as Stalin’s NKVD and Hitler’s Gestapo, instituted similarly intrusive regimes of thought-control (Saxonberg 2019). While the suffering of the accused and convicted is the single most important result of persecution, our results suggest its shadows can be long indeed. In the case of the Spanish Inquisition, the local level of persecution continues to influence economic activity and basic attitudes some 200 years after its abolition, undermining trust, reducing investments in human capital, and impoverishing the hardest-hit areas.