Yves here. Pols and headline writers are having to come up with new, adequately urgent ways to convey the DefCon Level 1 climate change disasters starting to beset us. One with tremendous knock-on effects is the marked slowing of the Gulf Stream. Experts have discussed it as a likely outcome for some time. Without belaboring details, the melting of the Greenland and Arctic ice sheets reduces the salinity of ocean water, and that in turn brakes and if it goes far enough, will halt Gulf Stream water and air stream circulation. Despite being a blindingly obvious and hugely consequential tipping point, it’s bizarrely it’s never been treated as a imminent, even with the Gulf Steam decelerating in the last decade. 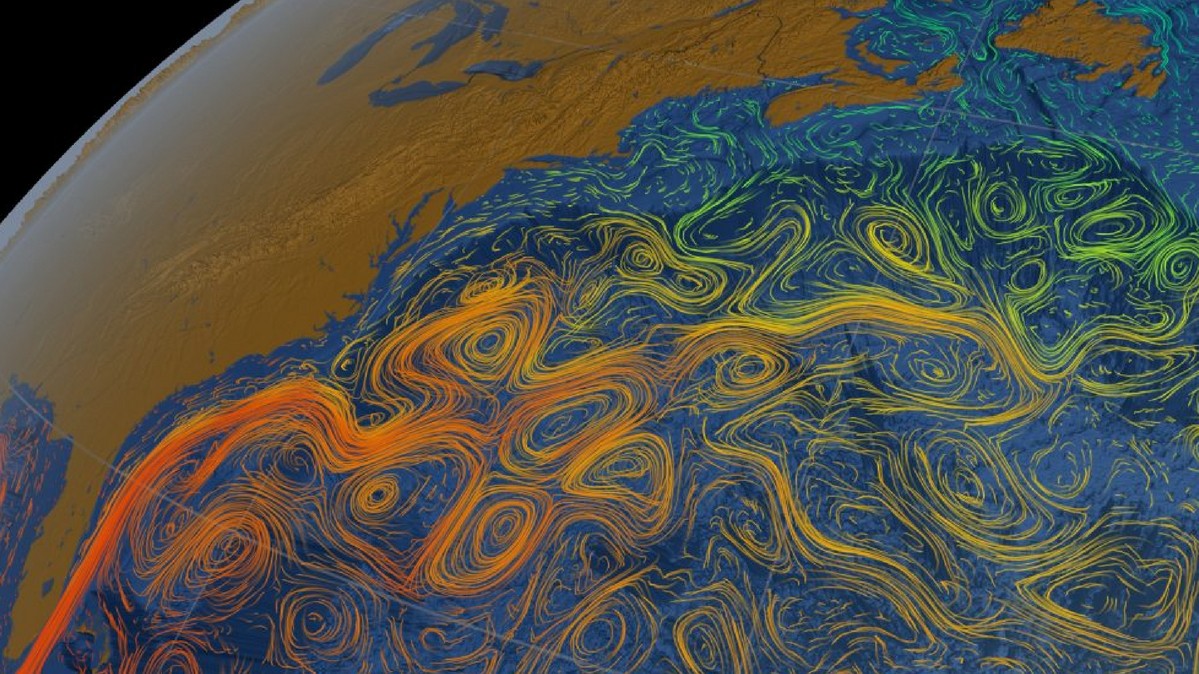 The Gulf Stream is an ocean current that carries warm water from the Gulf of Mexico into the Atlantic Ocean. (Image: NASA)

“Scientists say we cannot allow this to happen. People in power stand in our way.”

While heatwaves, fires, and floods produce warnings that “we are living in a climate emergency, here and now,” a scientific study suggested Thursday that a crucial Atlantic Ocean current system could collapse, which “would have severe impacts on the global climate system.”

The study, published in the journal Nature Climate Change, focuses on the Atlantic Meridional Overturning Circulation (AMOC), which includes the Gulf Stream. As the United Kingdom’s Met Office explains, it is “a large system of ocean currents that carry warm water from the tropics northwards into the North Atlantic,” like a conveyor belt.

Previous research has shown AMOC weakening in recent centuries. The author of the new study, Niklas Boers of the Potsdam Institute of Climate Impact Research (PIK), found that this is likely related to a loss of stability.

“The Atlantic Meridional Overturning is one of our planet’s key circulation systems,” Boers, who is also affiliated with universities in the U.K. and Germany, said in a statement.

“We already know from some computer simulations and from data from Earth’s past, so-called paleoclimate proxy records, that the AMOC can exhibit—in addition to the currently attained strong mode—an alternative, substantially weaker mode of operation,” he continued. “This bi-stability implies that abrupt transitions between the two circulation modes are in principle possible.”

In the absence of long-term data on the current system’s strength, Boers looked at its “fingerprints,” sea-surface temperature and salinity patterns. He said that “a detailed analysis of these fingerprints in eight independent indices now suggests that the AMOC weakening during the last century is indeed likely to be associated with a loss of stability.”

“The findings support the assessment that the AMOC decline is not just a fluctuation or a linear response to increasing temperatures,” he continued, “but likely means the approaching of a critical threshold beyond which the circulation system could collapse.”

As The Guardian‘s Damian Carrington reports, the collapse of “one of the planet’s main potential tipping points” would be devastating on a global scale:

Such an event would have catastrophic consequences around the world, severely disrupting the rains that billions of people depend on for food in India, South America, and West Africa; increasing storms and lowering temperatures in Europe; and pushing up the sea level in the eastern U.S. It would also further endanger the Amazon rainforest and Antarctic ice sheets.

The complexity of the AMOC system and uncertainty over levels of future global heating make it impossible to forecast the date of any collapse for now. It could be within a decade or two, or several centuries away. But the colossal impact it would have means it must never be allowed to happen, the scientists said.

“The signs of destabilization being visible already is something that I wouldn’t have expected and that I find scary,” Boers told the newspaper. “It’s something you just can’t [allow to] happen.”

It is unclear what level of global heating would cause a collapse, “so the only thing to do is keep emissions as low as possible,” he added. “The likelihood of this extremely high-impact event happening increases with every gram of CO2 that we put into the atmosphere.”

Some climate action advocates responded to the study by highlighting a science fiction movie that, as famed film critic Roger Ebert wrote nearly two decades ago, “is ridiculous, yes, but sublimely ridiculous—and the special effects are stupendous.”

This is literally the exact plot of the 2004 film The Day After Tomorrowhttps://t.co/MQRHRTq9oP

“We all laughed at The Day After Tomorrow, back in 2004,” said Guy Shrubsole, policy and campaigns coordinator at Rewilding Britain. “Turned out it was a documentary.”

The environmental advocacy group 350 Tacoma respondedto the findings with a call to action.

“There are warning signs that the Gulf Stream could collapse, an unimaginably catastrophic (and irreversible) impact of fossil fuel-caused climate breakdown,” the group tweeted. “Scientists say we cannot allow this to happen. People in power stand in our way.”

The study comes ahead of a United Nations climate summitin Glasgow set to begin October 31. Last month, U.N. Secretary-General António Guterres noted the upcoming event and reminded leaders of wealthy countries that “the world urgently needs a clear and unambiguous commitment to the 1.5-degree goal of the Paris agreement,” and “we are way off track.”