Yves here. The 2020 Democratic party triumpalism was overdone given what happened in the 2020 census and the Democrats’ peculiar failure to enact the For the People Act. Here’s an overview of the coming gerrymandering, per The Nation:

Republicans are in full control of states that will be adding seats based on patterns of population growth confirmed by the Census data, such as Texas and Florida. They also control several large states, such as Georgia, where seats will not be added but where a redrawing of lines could be used to tip existing seats to the GOP candidates. In contrast, a number of states where Democrats are in charge, such as New York and Illinois, will lose congressional seats. So, too, will heavily Democratic California, where lines are drawn by a nonpartisan commission.

Mind you, it’s not as if the Democrats are very good on climate change. But they at least feel compelled to make gestures, which is more than the Republicans do. 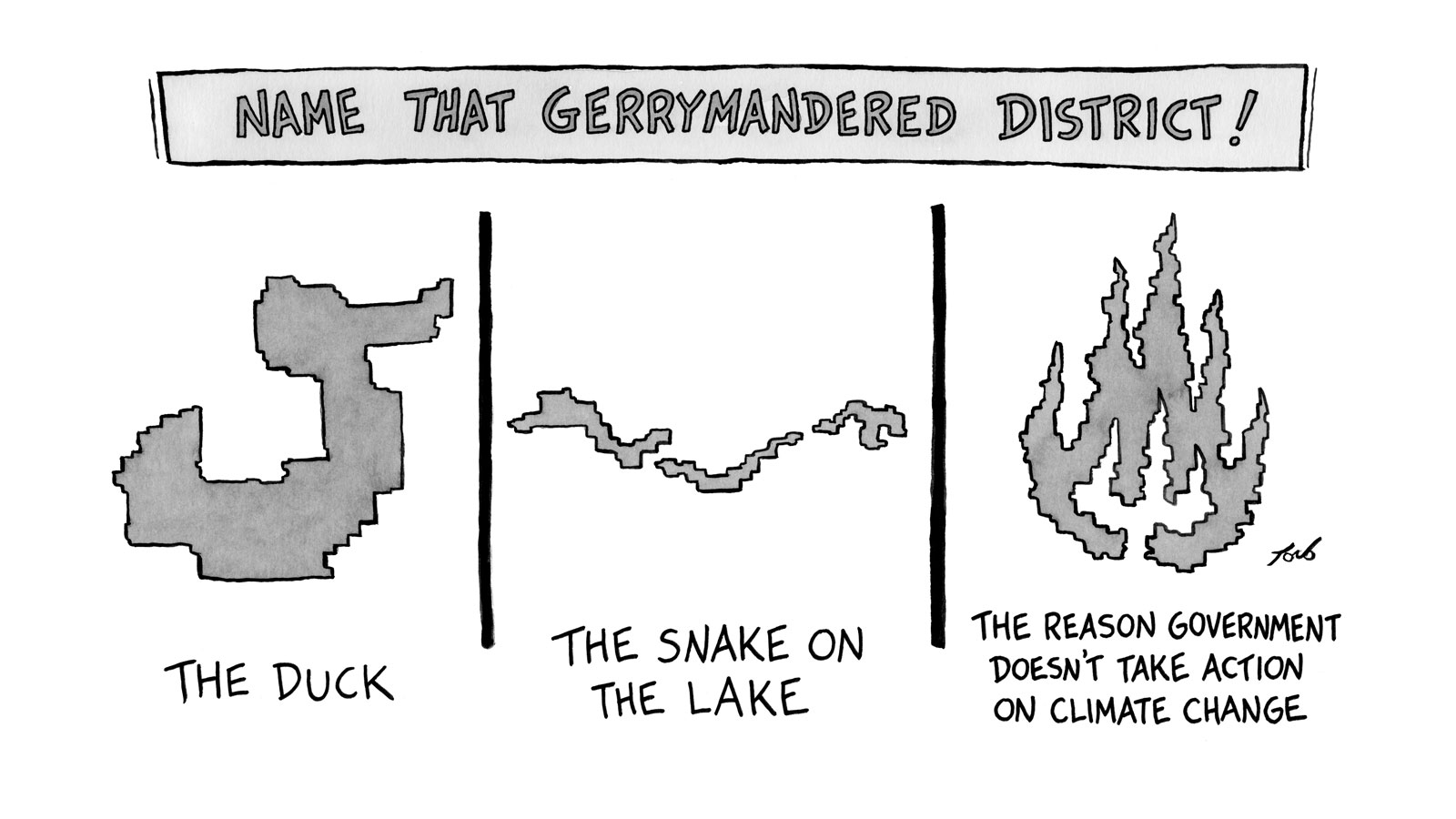 Republican Congressman Jim Jordan of Ohio, a staunch Trump supporter who recently called the Biden administration’s attempts to limit fossil fuel emissions “maybe the craziest thing I’ve ever heard,” represents an Ohio district whose bizarre shape has earned it the nickname “the duck.” Just north of the duck’s bill lies the district of Democrat Marcy Kaptur, a long, slender stretch of land along Lake Erie: “the snake on the lake,” as it’s often referred to.

Both districts appear frequently in lists of the nation’s most egregious examples of gerrymandering, a practice Ohioans voted to rein in in 2018. But the reforms put in place for the 2021 redistricting process haven’t worked quite as planned. Governor Mike DeWine, a Republican, on November 20 signed into law a new congressional map that confers significant advantage to his party, according to the Princeton Gerrymandering Project, which gave the map a grade of F. Groups like the League of Women Voters of Ohio and National Redistricting Action Fund have filed lawsuits claiming that the redistricting commission violated the state Constitution.

Another organization suing the redistricting commission is the Ohio Environmental Council, a Columbus-based advocacy group. According to staff attorney Chris Tavenor, recent history has shown that the new maps will play a key role in shaping climate action in the state.

“Over the past 10 years we’ve had a supermajority legislature in Ohio pass bill after bill that short-circuits Ohio’s ability to fight climate change,” he said. ​​These veto-proof Republican majorities are a direct result of harmful redistricting that has given the party a 64-35 majority in the Ohio House and a 25-8 majority in the Senate, although it averaged only 54% of votes in state elections over the past decade.

Variations of this story are playing out across the U.S. this year as political maps are redrawn.

“Redistricting happens every 10 years, following the decennial census,” said Adam Podowitz-Thomas, senior legal strategist at the Princeton Gerrymandering Project. The goal is straightforward: As populations rise and fall over time in different parts of the country, political boundaries need to shift as well to ensure roughly equal representation per number of residents. But too often, the process devolves into a partisan power grab, with Democrats and Republicans both engaging in gerrymandering.

The term gerrymandering dates from 1812, when then-Massachusetts governor Elbridge Gerry signed a bill approving wildly distorted maps drawn to benefit his party. One of the new districts was said to resemble a salamander – or, as one contemporary wit described it, a “Gerry-mander.”

The practice reverberates throughout American political life. “What we know based on political science research is that gerrymandering distorts the voices that are heard most loudly by representatives. The drawing of lines can result in communities that have a coherent view on some particular issue not being able to go to a single legislator and have that voice heard,” said Podowitz-Thomas. “It also, I think, results in distortions in the partisanship and polarization of those that are elected.”

An Anti-Renewables Agenda in Ohio

More recently, Ohio Senate Bill 52 created a new layer of challenges for renewable energy projects by empowering county officials to determine the fate of proposed solar and wind farms, including banning them altogether. Fossil fuel developments face no such restrictions in the state.

As has occurred in many parts of the country, the Ohio legislature has also sought to limit the environmental ambitions of the state’s cities, whose voters and elected officials are reliably more liberal than those in surrounding regions. One bill prohibited municipalities from banning natural gas, even though no such ban had been enacted in the state; another banned taxes on plastic bags.

Cincinnati Mayor John Cranley, a Democrat, believes that Senate Bill 52 falls into the punish-the-cities category. “Right now, Cincinnati is building the largest solar farm in America ever built by a city,” he said, with the aim of making municipal operations carbon-neutral. “It was in reaction to us doing that that [the Ohio Senate] passed a law that now says that if local governments like Cleveland or Columbus or Toledo wanted to follow suit and do something similar to us, they are now subject to a new law that allows small counties to tell farmers what they can and can’t do with their land.” Because the best land for wind and solar development tends to be in conservative rural areas, state senators reasoned local officials would be sympathetic to their agenda, Cranley said.

Similar scenarios are playing out elsewhere in the nation. In Texas, for instance, a majority of residents strongly support bold climate action,* but elected officials stand in its way. “This past [state] legislature, there wasn’t a single hearing on a climate change bill – well, on a bill to improve action on climate change,” said Luke Metzger, the executive director of advocacy group Environment Texas. “There were some hearings on bills to take away the rights of cities to tackle climate change, but no bills to proactively try and solve the problem.”

Metzger says he believes that allowing politicians to draw districts that virtually guarantee their own victory makes them less sensitive to constituent concerns and more susceptible to persuasion by powerful business interests – e.g., the oil and gas industry. Living in liberal Austin, he rarely takes the time to contact his representative, Roger Williams, a conservative Republican serving the sprawling, gerrymandered 25thCongressional District. Williams doesn’t need or expect his vote and has little incentive to take his concerns seriously. But corporations and trade groups devote extensive resources to winning politicians’ support on issues like energy policy.

“The big fossil fuel companies spend millions of dollars in campaign contributions and lobbying efforts and PR campaigns, and that ultimately will influence politicians quite significantly,” Metzger said.

While Ohio’s redistricting reforms have floundered, others have had more success. According to Podowitz-Thomas of the Princeton Gerrymandering Project, states like California and Michigan have shown that they can increase fairness and transparency by actively engaging the public in well-designed citizen-led redistricting processes.

This year, he and his colleagues are watching Colorado closely as it transitions to a new redistricting process intended to eliminate partisan influence and maximize citizen participation.

According to Marco Dorado, the Colorado state director of anti-gerrymandering group All On The Line, the effort has been functioning essentially as intended. One example: The state’s two 2021 redistricting commissions – groups comprising average citizens (four registered Democrats, four registered Republicans, and four independents) rather than politicians, with all members selected through a rigorous, randomized process – opted to exceed the requirements for the number of public meetings held throughout the state.

Redistricting Often Most Hurts Those Most Hurting

Dorado said that redistricting reforms like these are vital for making progress on climate issues. “Ensuring that voters are able to choose who their elected representatives are and not having it be the other way around – having elected officials choose who their voters are – is a really critical component in ensuring that we’re able to address whatever challenges we’re going to face in the next decade, climate change being one,” he said.

When it comes to environmental issues like climate change, Podowitz-Thomas emphasized that the stakes for redistricting are particularly high for the people who face the most risk.

Across the nation, environmental justice communities are often split apart during redistricting, diminishing their ability to seek help from elected officials, he said. “They’re such a small percentage of any legislators’ district that it’s very easy for a legislator to wave them off and say, ‘Well, I don’t really care about this. You don’t really elect me anyway, so I’m just going to ignore your issues.’”

Podowitz-Thomas believes that unless the U.S. Senate modifies or eliminates the filibuster, state-level efforts like Colorado’s represent the best hope for allowing communities to make their voices heard on climate change and other pressing issues. And although some states lag behind others on redistricting reform, he’s optimistic about the future.

“I don’t want people to feel hopeless about this. There has been a lot of energy, a lot of focus from your average citizen that just wasn’t the case ten years ago,” he said. “I think folks showing up and speaking out does make a difference. It does put pressure on the folks that are drawing the lines to draw fairer districts.”

Tom Toro is a cartoonist and writer who has published over 200 cartoons in The New Yorker since 2010.