Robin Wigglesworth of the Financial Times does an impressive job of documenting a major factor, if not the factor, in Tesla’s stratospheric valuation: ginormous derivatives trading in Tesla shares. Even in this meaty piece, Wigglesworth only gets to the biggest part of the picture, which is a mind-boggling $241 billion in net notional value in option trades a day. The charts below explain much: 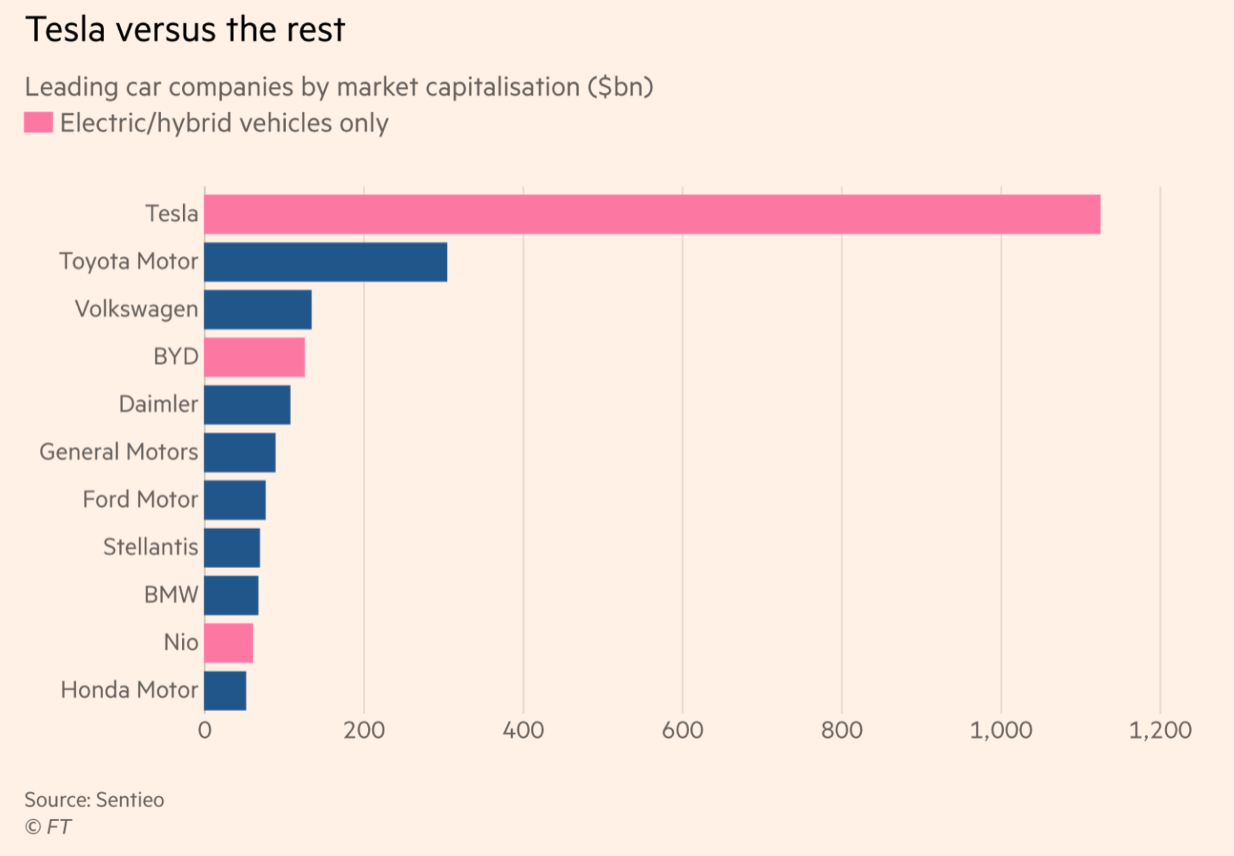 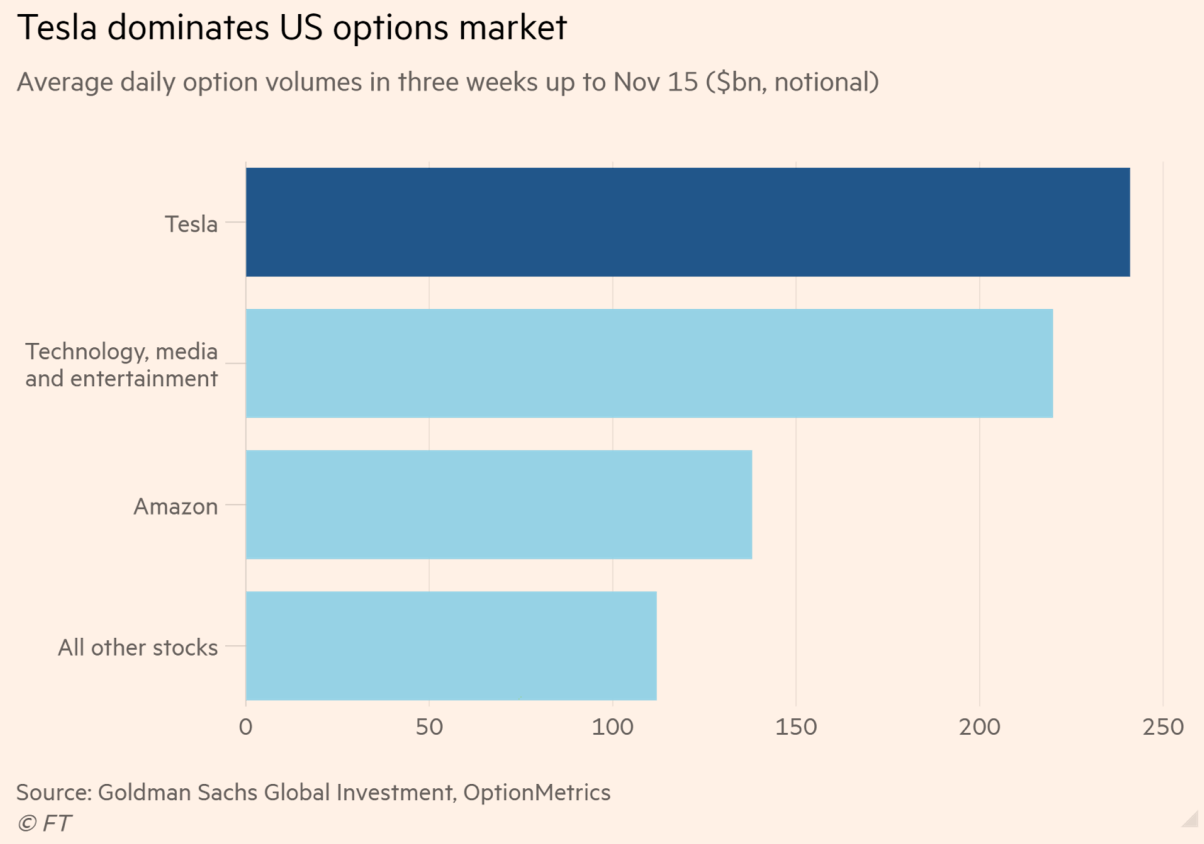 Market makers gladly sell call options to retail and make a huge profit doing so – it’s complicated but essentially the busy options market means call options are intrinsically overvalued and expensive, so market makers will sell these expensive options, hedge their position by actually buying Tesla stock, pocket the options premium, then sell the Tesla stock when the options position is closed. The market makers hedging by buying Tesla stock is actually one of the biggest factors behind the fast and enormous Tesla rallies – it’s an enormous source of buying.

Pink paper readers disputed a claim in the article, “Ordinary retail investors have been the primary power behind the Tesla options boom.” There is a whale in Tesla, billionaire Leo KoGuan who claimed he had bought nearly 7.2 million shares by early November, mainly though exercising call options. That makes him the third largest Tesla investor after Elon Musk and Larry Ellison. But no one would consider him to be an “ordinary retail investor, even though he is egging on individual investors on Reddit forums. Reader Dave Hedgehog argued that retail buyers could not be the driving force:

The typical premium on ATM tesla options is currently about 7% of the nominal value. I have absolutely no idea what the distribution of strikes traded is but if we assume ATM is the average then that is $17bn of premium being traded every single day.

That’s every single US investment account trading $42,000 a year on this single stock’s options.

But there is no doubt a lot of retail action, which the pros love. Per reader klog:

Thanks for this article…. So it sounds like the street is real lay short gamma… explains the wild price swings. Retail investors buying options makes me laugh as an ex vol trader…. We know they will not be hedging any gamma and just bleeding theta (but they don’t know what any of those terms even mean).

And exchange traded options aren’t the only part of the Tesla stock frenzy:

Tesla’s fame and the volatility of its stock have also started to make it a component in some structured investment products, such as “auto-callables”, further enmeshing its shares into the fate of the broader financial ecosystem.

Auto-callables are complex savings vehicles — particularly popular with Asian investors — where bankers construct an attractive, bond-like fixed return by selling stock options. Historically they have been mostly options on broad stock market indices such as the S&P 500, Hang Seng or Nikkei, but because of falling market volatility some bankers have started to structure them with options on choppier individual stocks. Tesla has emerged as a popular choice.

“Tesla is perceived as safe because it is big and at the technological vanguard, but it’s incredibly lucrative [for investors] to put into structured products because it is so volatile,” says Simplify’s Green.

Back in my childhood, when investment products with embedded options were first being developed, the option would be sold OTC by a professional dealer to, say, a mutual fund. The dealer’s exposure would then be hedged various ways, which could include using exchange-traded options.

The Financial Times points out that money managers are feeling compelled to load up on Tesla, since the underperformance of the average equity fund was in part due to not loading up enough on the car maker:

For US mutual fund managers as a whole, Tesla alone crimped their relative performance by 0.46 of a percentage point in October, according to Wells Fargo analysts, helping turn what was heading towards being a decent year into yet another mediocre one for stockpickers.

So many storied short sellers have been burned betting against Tesla that short interest is low.

Tesla is also the poster child in a trend towards options trading dominating equity trading: 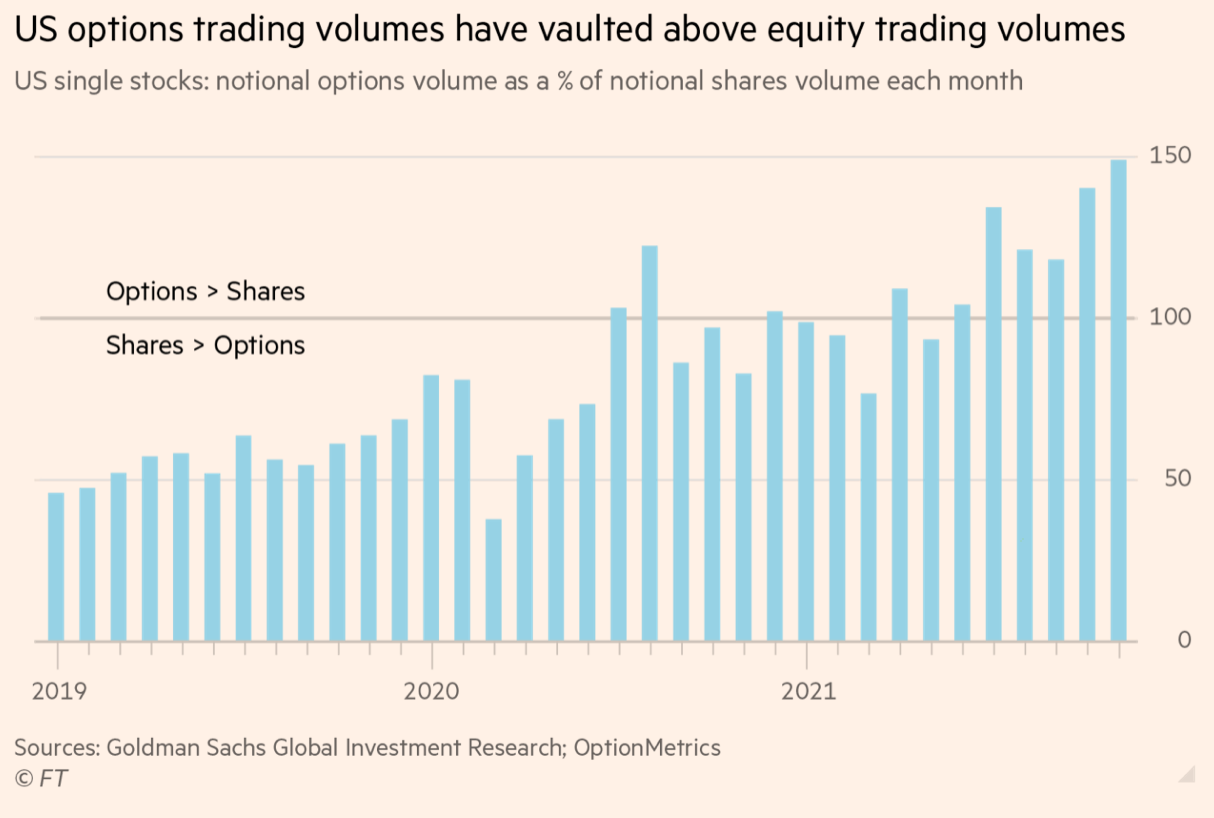 One has to wonder what that chart would look like ex Tesla. Nevertheless, leverage is what creates systemic risk in financial markets. The Financial Times points out that that Tesla’s stock fell by nearly 18% in November, and nothing came unglued, but that decline merely gave up gains in October.

Equity derivatives are traded on exchanges, or if OTC, ought to be subject to central counterparty clearing. The dirty secret of derivatives exchanges and clearers is that the margin they are required to post isn’t sufficient to cover default risk (a large enough deposit would make most derivatives unattractive). Recall that in 2018, a single defaulting Norwegian counterparty of Nasdaq Clearing AB blew through his own collateral, the central counterparty’s capital, and then a fund of contributions from non-defaulting members, plus a general fund for all of Nasdaq clearing. Experts have worried that central counterparties can fail and are therefore effectively “too big to fail” entities. I’d like to know about where the Tesla options and other derivatives are cleared and more important, how significant Tesla activity is to those hubs.

It goes without saying that Tesla is overvalued, but a stock being overvalued is no barrier to it becoming even more overvalued. EV wannabe Rivian is valued at $110 billion, mainly by riding on Tesla’s coattails. Even though Tesla has been a technology pioneer, JD Powers and Consumer Reports surveys show the cars are not well made, and they cost a lot too! It’s not clear why the big automakers haven’t gained more ground (perhaps reluctance to cannibalize their conventional cars) but the Koreans are catching up, and the Chinese have targeted this sector too. At some point the gig will be up and Tesla will be valued like a car company. But don’t ask me to make book as to when.