Patient readers, I am finishing up an assault on Amazon, over their deathtrap of a warehouse in Edwardsville, IL. So embarrassingly this is an open thread. Talk amongst yourselves! –lambert

Another migratory bird (with accompaniment).

On the word “mild.” To me, “mild” means “status quo,” i.e. “We’re enduring the present situation, and what is to come will be no worse.” Well, the present situation, whether you look at cases, deaths, or hospitalizations — isn’t mild at all. In a civilized country, 812,205 deaths — we lost 750,000, a similarly large number, in the Civil War — would be regarded as a catastrophe. Yet we soldier on. It’s weird. I don’t understand the mass psychology at all.

Lambert here: From Yves’ cross-post Friday, it looks like CDC’s vaccination numbers are off, whether accidentally or on purpose we do not yet know. However, given that “Everything is like CalPERS,” one would certainly give consideration to the latter thesis. The question is how far the rot goes. It would be remarkable if CDC, so bungling in other respects, were able to game all all of its data (particularly since data collection and processing are so fragmented, and also because Johns Hopkins ought to be serving as a check). It also occurs to me that “Vax vax vax” gives CDC a strong incentive to massage that particular dataset, and the rationalization to do so; the public health establishment lies all the time, as we know. In any case, all the data is already known to be bad, because this is America. It’s useful to cross-check the official narrative, however, since nobody can look at cases, hospitalization, and deaths, even as they are, and assume that the pandemic is anything like over. The same was true for “Hot Vax Summer.” So, for now, I will carry on, but do add a truckload of salts to the Vaccination data. Of course, I could always curate a wastewater collection instead; there’s a reasonable number of them now. 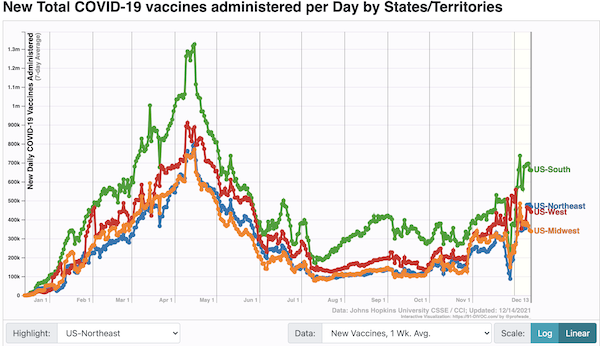 A roller coaster. More data problems? (I have also not said, because it’s too obvious, that if by Bubba we mean The South, then Bubba has done pretty well on vax, despite all the sturm und drang in the press.

60.9% of the US is fully (doubly) vaccinated (CDC data, such as it is, as of December 13. Becker’s is pretty good for a trade journal. So we’ll watch to see what they say on CDC’s potentially massaged vax data.) The stately 0.1% rise per day returns. We have broken the important 60% psychological barrier! Mediocre by world standards, being just below Estonia, and just above Peru in the Financial Times league tables as of this Monday). I would bet that the stately rise = word of mouth from actual cases. Or perhaps the numbers are being managed, like earnings. However, as readers point out, every day those vaccinated become less protected from severe illness and hospitalization, especially the earliest. So we are trying to outrun the Delta… With Omicron coming up fast on the outside! 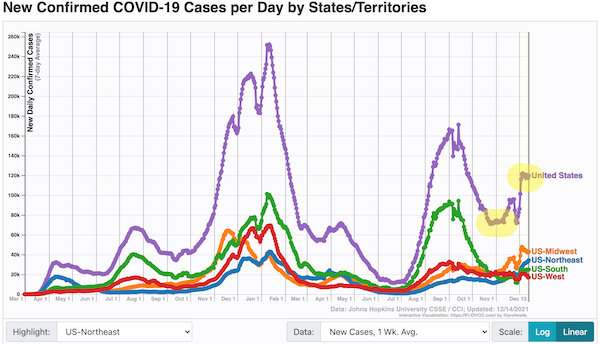 I whinged about the period of fiddling and diddling that appeared before the previous peak (and hadn’t appeared hitherto). Things went up, peaked, or went down. Now we are fiddling and diddling again. I have helpfully highlighted both periods. Also, as happened in 2020, I would expect a second, higher peak, from Omicron if for no other reason. The Midwest’s numbers are down, so here is that chart: 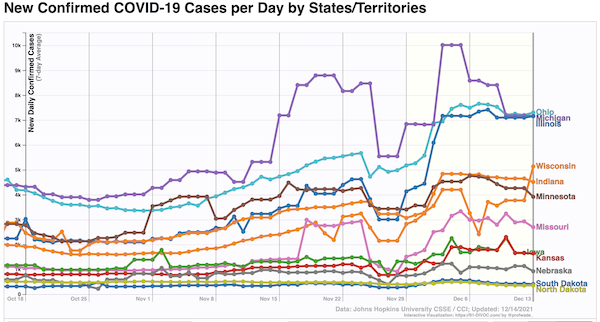 At a minimum, the official narrative that “Covid is behind us,” or that the pandemic will be “over by January” (Gottlieb), or “I know some people seem to not want to give up on the wonderful pandemic, but you know what? It’s over” (Bill Maher) is clearly problematic. (This chart is a seven-day average, so changes in direction only show up when a train is really rolling.)

One of the sources of the idea that Covid is on the way out, I would speculate, is the CDC’s modeling hub (whose projections also seem to have been used to justify school re-opening). Here is the current version of the chart from the CDC modeling hub, which aggregates the results of eight models in four scenarios, with the last run (“Round 9”) having taken place on 2021-08-30, and plots current case data (black dotted line) against the aggregated model predictions (grey area), including the average of the aggregated model predictions (black line). I have helpfully highlighted the case data discussed above. Not updated: 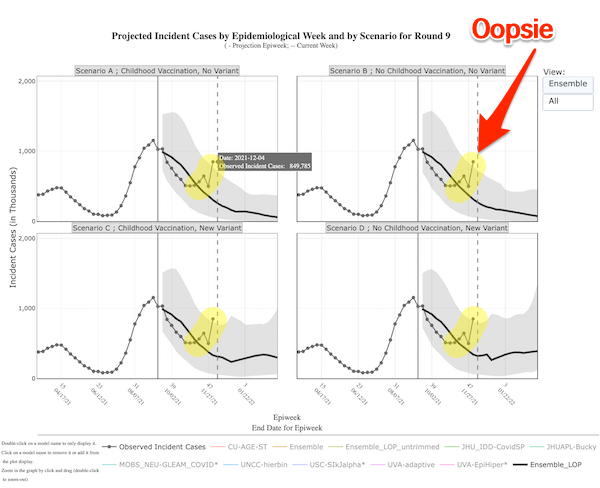 Case data (black dotted line) has been within the tolerance of the models; it does not conform to the models’ average (black line), but it stays within aggregated predictions (the grey area).

I wrote: “It’s too early to say ‘Dammit, CDC, your models were broken’; but it’s not too soon to consider the possibility that they might be. The case data still looks like it’s trying to break out of the grey area. We shall see.” The case data has now broken out of the grey area (see at “Oopsie!”). Since the models are aggregated conventional wisdom, it’s not fair to call them propaganda, exactly. Nevertheless. conventional wisdom is looking a little shaky, and anybody who relied on them to predict that we would be “back to normal” by early next year should be taking another look at their assumptions. And this is — I assume — before Omicron! 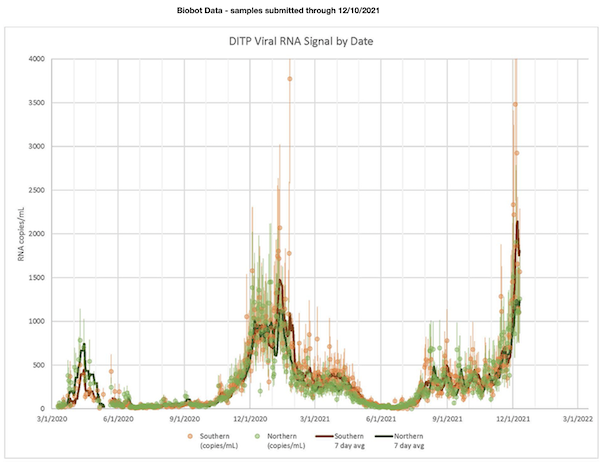 A steep drop in the average, like the last peak. We’ll see if gets choppy again, or not.

The Massachusetts Water Resources Authority (MWRA) service area includes 43 municipalities in and around Boston, including not only multiple school systems but several large universities. Since Boston is so very education-heavy, then, I think it could be a good leading indicator for Covid spread in schools generally. 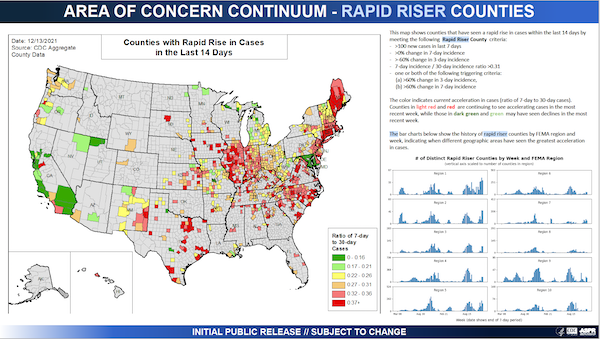 West Coast much better, Maine much worse. More flecks of red, especially in Texas. Weird flare-ups, like flying coals in a forest fire. They land, catch, but — one hopes — sputter out. 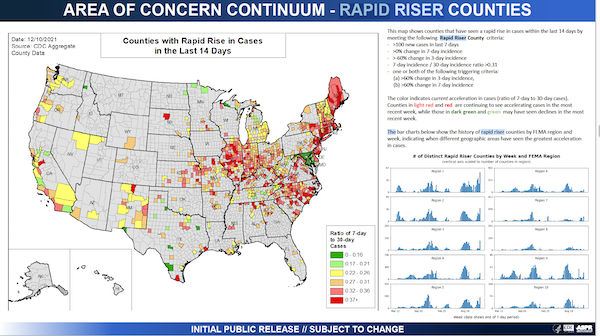 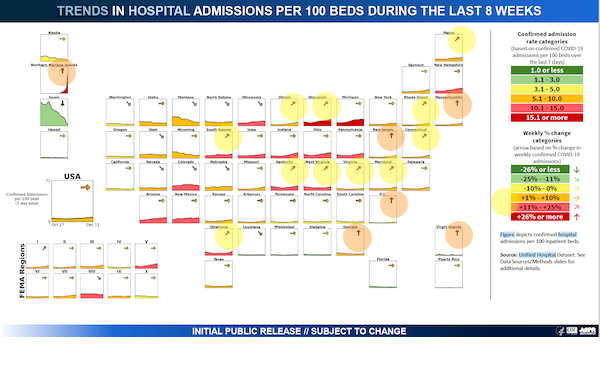 I have helpfully highlighted the states where the “trend” arrow points up in yellow, and where it is vertical, in orange. (Note trend, whether up or down, is marked by the arrow, at top. Admissions are presented in the graph, at the bottom. So it’s possible to have an upward trend, but from a very low baseline.)

Death rate (Our World in Data): 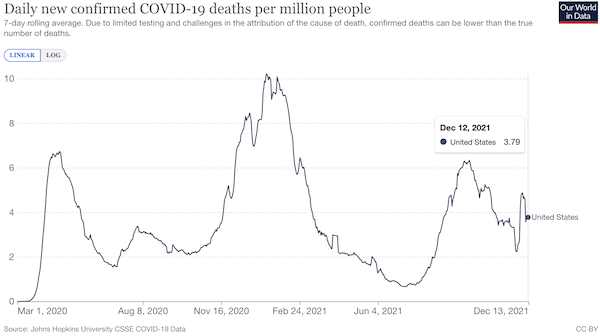 Excess deaths (total, not only from Covid), not updated: 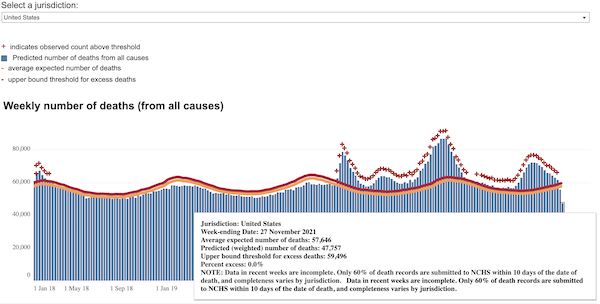 Hard to believe we have no excess deaths now, but very fortunate if so. (CDC explains there are data lags).

(Adding: I know the data is bad. This is America. Needless to see, this death rate is a public health debacle. It’s the public health establishment’s duty to take care of public health, not the health of certain favored political factions. Also adding: I like a death rate because it gives me a rough indication of my risk should I, heaven forfend, end up in a hospital.)

Covid cases in historic variant sources, with additions from the Brain Trust: 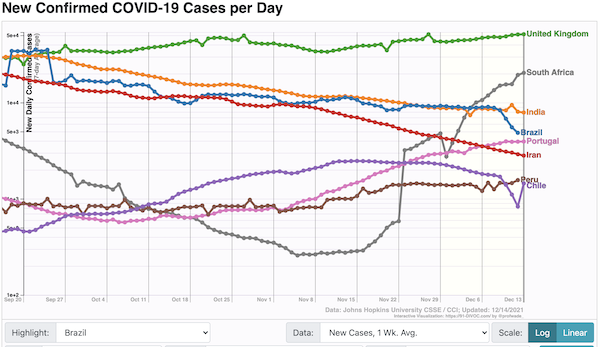 South Africa’s rise looks linear, even though this is a log scale. Let’s hope Chile’s sudden jump just a data issue. Sorry for the kerfuffle at the left. No matter how I tinker, it doesn’t go away.

Contact information for plants: Readers, feel free to contact me at lambert [UNDERSCORE] strether [DOT] corrente [AT] yahoo [DOT] com, to (a) find out how to send me a check if you are allergic to PayPal and (b) to find out how to send me images of plants. Vegetables are fine! Fungi and coral are deemed to be honorary plants! If you want your handle to appear as a credit, please place it at the start of your mail in parentheses: (thus). Otherwise, I will anonymize by using your initials. See the previous Water Cooler (with plant) here. Today’s plant (AA): 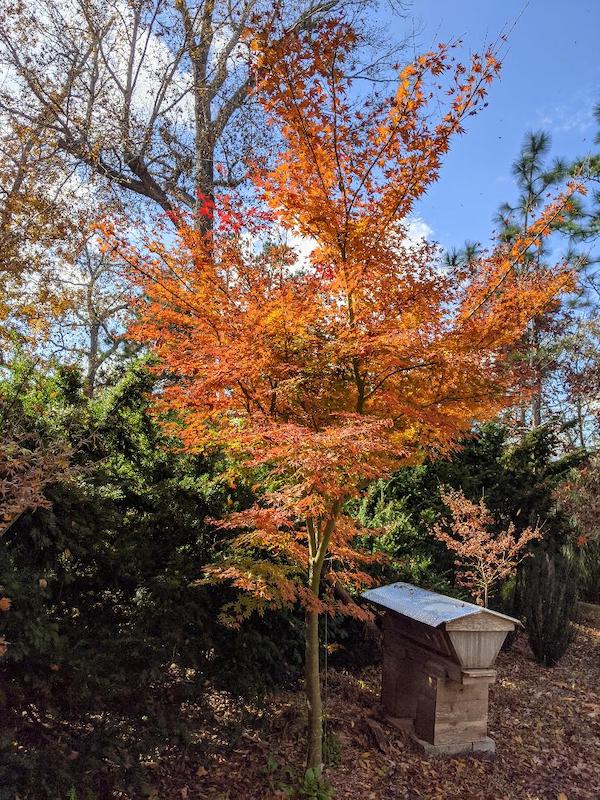 AA writes: “Our daughter Kay gathers seedlings at the local arboretum every spring. Never know how the Japanese Maples will turn out. This one is a beauty! We planted it next to one of our bee hives – a Top Bar style – for summer shade… Has been amazing in early December.” Gorgeous maple, lovely sky… But what an interesting beehive! I’ve never seen one like it.

Readers, thank you for all the plant pictures!