Yves here. We’re running this post because the underlying spin campaign is consistent with a troubling US tendency to keep escalating with Russia. The Bellingcat effort to reheat a very cold MH17 pot is yet another belligerence indicator.

John Helmer has given extensive and exhaustive coverage of why the Western claims about the MH17 downing don’t add up, even to the degree that the official stories in countries that had victims on the flight are at odds. But even before we get to that….why was a passenger plane routed through a militarized area? And why would Russia or Russian aligned Ukrainians want to shoot a passenger plane down? Even if they did take the aircraft down, it was sure to have been an accident, since it is hard to think anyone would be stupid enough to think that shooting a passenger plane, as opposed to be military target, would in any way be helpful.

Please note that this article is by a guest writer at Dances with Bears, Liane Theuerkauf.

By Liane Theuerkauf, Munich. Originally published at Dances with Bears

Igor Tarakanov is a Russian soldier.

He first appeared publicly two weeks ago, on November 17, to say he had escorted a battery of Russian Army BUK missiles from Russia into Ukraine early in the month of July 2014; that was days before Malaysia Airlines Flight MH17 was downed and destroyed on July 17, 2014.

Tarakanov’s claim contradicts everything known for seven years and made public by the US National Intelligence Council, State Department and White House;  the Dutch Military Intelligence and Security  Service (MIVD);  the Russian Defence Ministry;  the Joint Investigation Team (JIT) headed by Dutch police; Dutch prosecutors at the murder trial which opened in Schiphol in March 2020; the presiding judge at the trial Hendrik Steenhuis, and his secret investigating judges; the Dutch lawyers defending the  Russian Army officer in the dock;  and the agency in charge of all evidence  in the prosecution’s case file,  the Ukrainian Security Service SBU.

Tarakanov is an unusual name Russians aren’t keen to have. It means cockroach. As insects go, these are very ancient – about 350 million years – very hardy, very numerous.  There is no evidence that soldier Igor Tarakanov exists – except for a publication in English by the Bellingcat group two weeks ago, and in Russian at the same time by a related publication,  The Insider.

In their story, Tarakanov appears as one of thirty-four Russian soldiers, retired from active service and recruited to work as international mercenaries. Thirty-three of them were arrested in Minsk, Belarus, on July 29, 2020, in a plot which has been nicknamed in the press “Wagnergate”. That’s a reference to the Russian private military company called Wagner. Tarakanov has been reported as the 34th man who was not arrested.

A quick memory refresher: last year, on July 29, 2020,  the Belarusian KGB and OMON special police arrested the 33 Russians when they were staying at a countryside resort outside Minsk. Shortly afterwards  both the Russian and Ukrainian prosecutors filed extradition requests. Kiev claimed the Russians captured in Minsk were Wagner employees who had fought in the eastern Ukraine  conflict and who had committed war crimes by fighting alongside the separatists against the Kiev forces.

There was wild speculation in the media as to why the 33 men were in Belarus. The rumours ranged from an alleged plot to overthrow the Belarus President Alexander  Lukashenko shortly before the presidential election due on August 9, 2020,  to an alleged plot by the SBU to capture the men, extract confessions for war crimes trials in Kiev, and possibly send their statements to the MH17 trial in The Netherlands.

In due course, it was confirmed there had indeed been a Ukrainian sting operation, and the 33 Russians had fallen into the trap.  It turned out, it was reported in the Russian and western media,  that Ukrainian agents had pretended to be a Russian private military company,  using a fake website, fake emails, fake identities and Russian company letterheads, in order to provide the men with fake contracts to work as guards for Rosneft oil operations in Venezuela.

The selected recruits were lured from Russia to Belarus, and a flight from Minsk to Istanbul was booked for them. From Turkey they were told they would be flown on to Havana and then Caracas. The Ukrainian plan had been to force their Turkish flight as it crossed Ukraine airspace to land in Kiev and to arrest them at the airport. This plan was similar to the capture in May 2021, ten months later, of Belarus oppositionist Roman Protasevich when he was on a Ryanair flight between Athens and Vilnius, Lithuania, flying over Belarus. In Germany an operation like this is called a Himmelfahrtskommando (“suicide squad”).

On July 31, 2020,  the Belarusian news agency BELTA published a list of the 33 detained mercenaries with their names, patronymics,  and dates of birth. Already in the first message, the detainees were called employees of the Wagner foreign private military company.

From this list, Novaya Gazeta of Moscow was able to publish more detail about each of the men. About a third of the detainees were veterans of the Wagner group. “Before considering the reported versions of the appearance of these  brutal men in Belarus, let’s look at the questionnaires filled out by them… ” 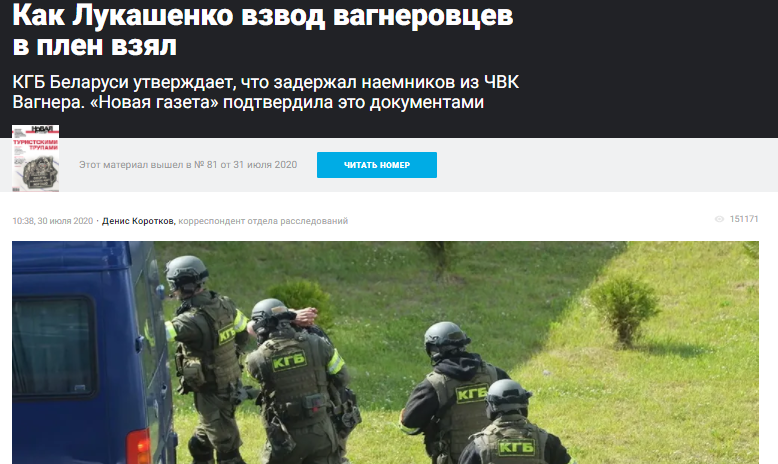 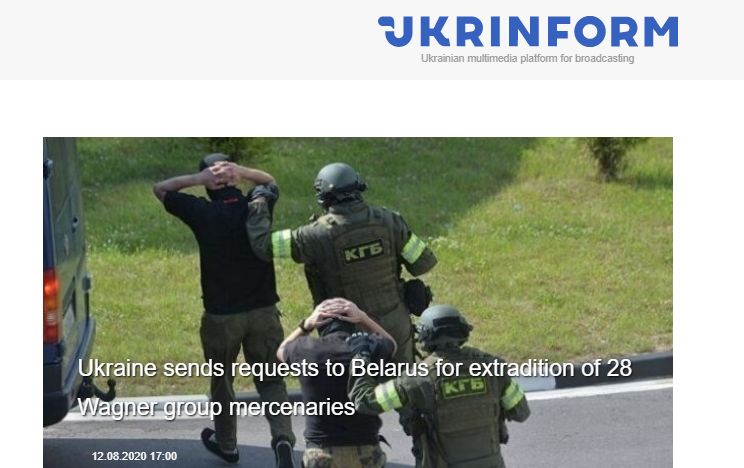 The western media, the secret services and many government officials readily adopted the version which was published by the Ukrainian state agency Ukrinform. This is how the nickname for the affair became Wagnergate.

According to Ukrainian government sources reported by CNN, Wagnergate was “an elaborate intelligence sting by Ukraine, with the knowledge and alleged support of the United States. According to the Ukrainian intelligence officials, the Ukrainian-led operation got US cash, technical assistance and advice from the CIA on how to draw the Russian mercenaries in.  A senior US official told CNN those claims are ‘false.’ He indicated US intelligence was aware of the operation but denied any involvement. The official, who requested anonymity as he was not authorized to speak publicly, suggested efforts to implicate US agencies may be an attempt to share, or even pass, blame for what was a high-risk Ukrainian operation that went wrong. CNN spent weeks in Ukraine, verifying and reviewing accounts of the operation and speaking to the men who were on the inside.” 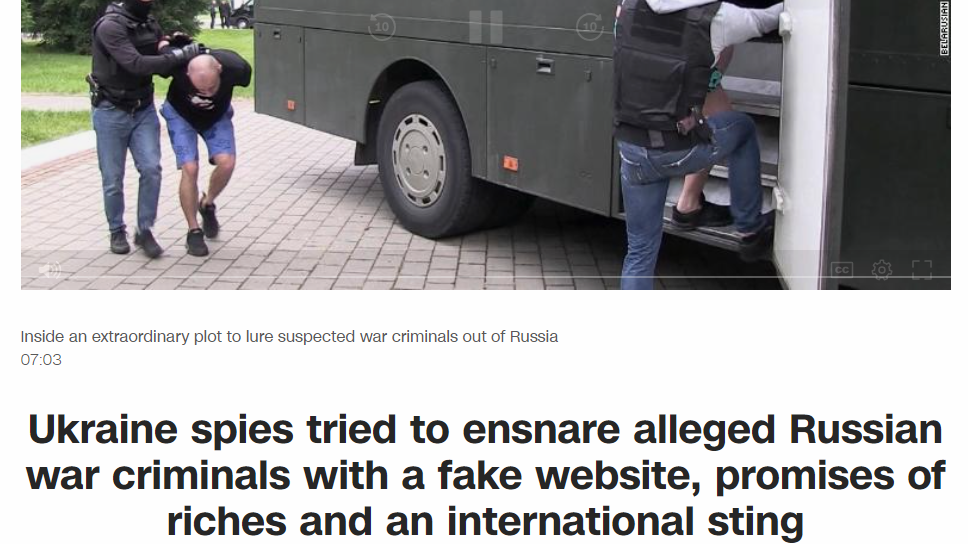 This CNN report appeared on September 8, 2021,  just days before Bellingcat started broadcasting.  CNN made no mention of Tarakanov or of BUK  missiles. Nor did the US intelligence or Ukrainian goverrnment sources who briefed CNN mention the MH17 shootdown or trial. “According to CNN’s Ukrainian sources, the failure was a serious blow to Ukrainian intelligence who they say had worked on hooking the Russian suspects for close to 18 months. ‘If these people would have ended up here in Ukraine, the details of their criminal acts would have become known around the world,’ one of the sources told CNN. ‘Ukraine could have brought them to justice and shown that our fight with Russia is serious and that we won’t raise our hands in surrender,’ the source added. ”

Two weeks after CNN, the Wagnergate story resurfaced in the Ukrainian media on September 24, 2021. One of the Bellingcat writers, Christo Grozev (lead image), told a Ukrainian publication that three of the Russian candidates for the fake Venezuela operation “may be involved in the MH17 crash.  Two of them boasted themselves that they were at the launch site, but, to be honest, this is not supported by objective data.”  Note the subjunctive verb and the disclaimer of evidence.

One of them, according to Grozev,  claimed he had “accompanied the convoy with BUKs and in a managerial role was engaged in convoys of these BUKs  [note the plural] from the border of Ukraine and Russia to the distribution point in the Lugansk region.”

Igor Tarakanov was making his first appearance. Bellingcat was conceding he hadn’t gone to Belarus with the others; had not been arrested; and apart from his say-so, there was no evidence of his BUK claim. At first, Bellingcat wasn’t giving him his name. That surfaced several weeks later on November 17. According to the new publication, “at least two of the mercenaries claimed to have used sophisticated, Russia-provided anti-aircraft weaponry in and around a location near Snizhne on certain days that might make them useful witnesses in the ongoing MH17 trial. One of the mercenaries had even spoken of having escorted a BUK-TELAR [transporter-erector-launcher-and-radar] across the Russian-Ukrainian border — an anti-aircraft weapon of the same type as of the one that shot down MH17 – in early July 2014.”

The individual identified is still not named as Tarakanov. There is no photograph of him alongside the others identified by Bellingcat in their report. The source of these papers included documentation created by the SBU to lure the Russians. The earlier claim that the BUK-TELAR battery had been deployed in the Lugansk area is missing from the report. The number of BUKs has dropped from several to one. The name Tarakanov appears in the report as one of the group, but only that he did not appear in the group which traveled from Moscow to Minsk. There is no evidence of the missing man talking about escorting BUK-TELARs into Ukraine days before  July 16, which is the official version of the date presented by Dutch prosecutors at the MH17 trial.

Source: https://theins.ru/
The Insider repeats the same claims of the Bellingcat report that one of the 34-man group had escorted BUK missiles into Ukraine in early July; that Tarakanov had been one of the original 34 recruits; and that he had dropped out. In the Bellingcat version, the 34th man had gotten suspicious; in the Insider version he had become ill.

A report by Regnum reveals that the July 15, 2020, seat reservations and ticketing by Turkish Airlines – paid for in cash – counted only 33 individuals, not the 34 reported by The Insider.  The data of these Turkish Airline electronic tickets suggest that no 34th man was planned for or expected in Minsk. These data were published on August 2, 2020. 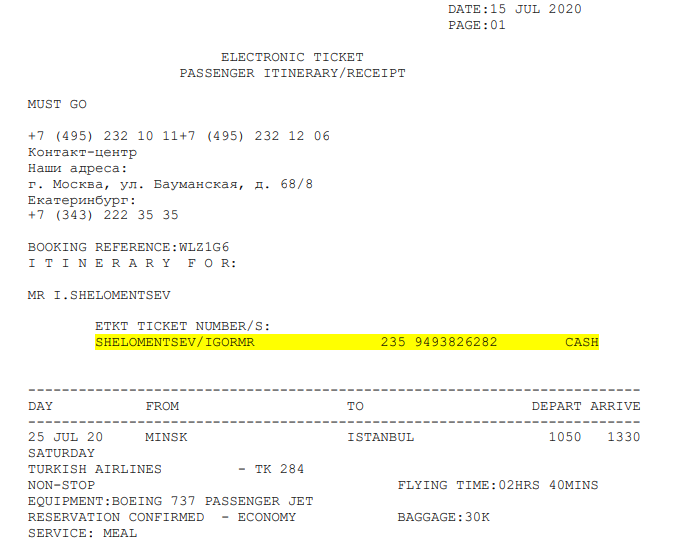 Research by Alexander Kotz, a reporter for Komsomolskaya Pravda in Moscow, revealed on August 6, 2020, the 33 names booked initially to fly on Turkish Airlines to Istanbul, as well as travel documentation, reservation agents, and photographs of several of the 33 men arrested in Minsk. 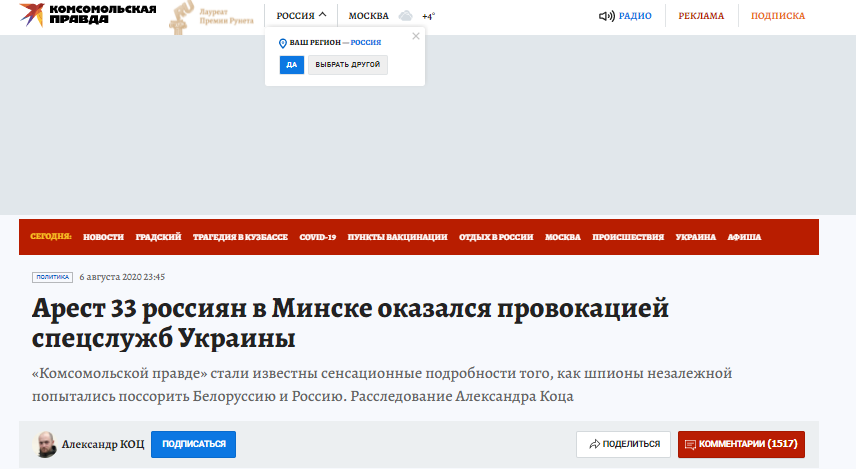 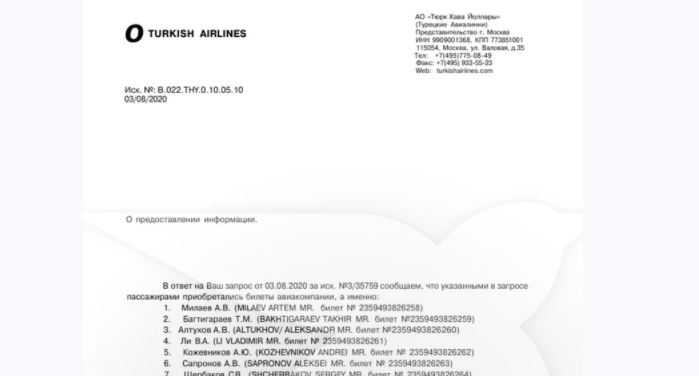 The link between Tarakanov as the 34th man and the BUK TELAR missile deployment days earlier than the Dutch version comes from  questionnaire papers gathered by the SBU from the fake recruitment operation. The papers revealing the early July BUK-TELAR delivery have not been published. They are missing, like Tarakanov himself.

Kotz reported on the Belarus arrest operation more than a year ago. He has also reported on the role of the Central Intelligence Agency (CIA), first in devising the plan, and then exposing  what went wrong with the Ukrainian operation. “Operations in intelligence and counterintelligence are not figure skating or rhythmic gymnastics, where the performance of complex elements is evaluated. Here success or failure is evaluated by the final result. It is necessary, as in hockey, to look at the scoreboard. And there  today we see that the Russian citizens are at home. What is this, if not the failure of the CIA and their Ukrainian partners? ”

According to Kotz, reporting this month, Russian counterintelligence sources have told him two CIA agents in Kiev, Timothy Skovin and Brian O’Bern, were the masterminds of the plot to sting the Russians. 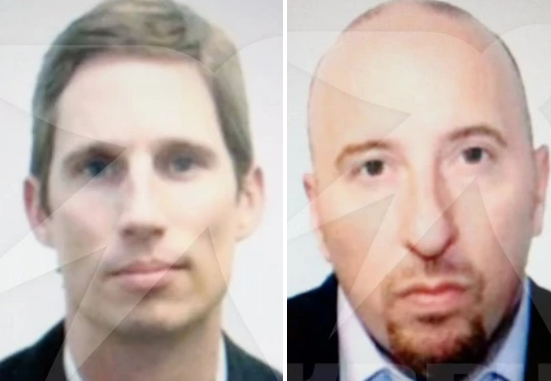 According to Kotz, the postponement in the flight plan of the 33 mercenaries in Minsk followed an order from the Ukrainian President, Vladimir Zelensky, who had just agreed with the Kremlin on a temporary ceasefire in the fighting in Donbass. The delay led to the arrests which, Kotz claims, was a coordinated operation by the Russian and Belarusian services. “Russian counterintelligence worked to prevent this, which quickly and efficiently unraveled this tangle, naming almost everyone who was involved in the first act of a state prank in history. ”