Yves here. The subject of bail reform is a hot button issue and therefore produces a huge amount of emotionally charged and often anecdotally (at best) driven claims.

Some things to consider:

1. The premise of the US jurisprudence system is supposed to be “innocent until proven guilty”. Incarcerating someone who has merely been accused to make sure they show up for trial isn’t even remotely consistent with that, um, stance.

2. A second rationale for pre-trial incarceration is that the suspect is highly likely to commit a crime again before trial. Judges wind up making snap decision on remand v. bail (and the level of bail) based on snippet-level arguments from the prosecution and defense on the heinousness of the alleged crime (assuming the accused did it), the accused’s past record, and his incentive and ability to flee. Although it is not dispositive, the data in NYC says so far that the pre-trial recidivism, at least in terms of violent crime, is only 2%. But violent crime generates headlines, so even if this might be a very good number in theory, press coverage could lead to opposite conclusions.

3. A third issue is that these pre-trial jails are often horrific. Rikers is a cess pit. If you accept proposition #1, pre-trial gaols should be Club Feds, where you aren’t free to go but the conditions are otherwise tolerable. And weirdly, despite our high-surveillance society, I don’t recall hearing of cases ex the rich of putting pre-trial defendants under house arrest. Do we believe poor people won’t be as respectful of an ankle bracelet regime as the well off?

4. An offsetting consideration this article does not discuss is fear of potential victims when an individual accused of a crime is still out in the community. Here I mean those who were (or believe they were) physically harmed by the accused or are witnesses who fear intimidation or worse. For instance, consider a domestic violence victim who has a jealous ex who has repeatedly violated restraining orders and is now charged with beating her. And the police don’t begin to have adequate resources to provide a protective detail.

By Josefa Velasquez and Rachel Holliday Smith. Originally published at THE CITY on February 21, 2022 The subway shoving death of Michelle Go and murder of Christina Yuna Lee in Chinatown last weekend have once again drawn out critics of New York’s bail reform, which prohibit cash bail for most misdemeanors and non-violent felonies.

Those critics include Mayor Eric Adams. In a recent trip to Albany, he pushed to amend the bail laws, including giving judges more discretion over who to lock up pre-trial. State legislative leaders responded with a hard no.

Such political wrangling is hardly new. Ever since bail reform was passed by the state legislature in 2019, the law has been hotly debated. Weeks after those changes took effect in 2020, a spate of hate crimes against Jewish New Yorkers spurred a backlash. In response, lawmakers passed tweaks to the law in April 2020.

The recent shooting deaths of two NYPD officers, as well as the death of a teenage fast food worker in Upper Manhattan, have also intensified the controversy over the new bail laws.

While some blamed Lee’s murder on the bail reforms since her accused killer had eight prior arrests in New York, including a recent arrest in January, the Daily News found that the reforms did not contribute to the suspect walking free.

The specifics of the law are hard to parse, especially amid emotionally-charged debate from all parts of the political spectrum. Combined with the fact that much of the rollout of the law happened during the pandemic’s early days, you’re forgiven if the issue has flown over your head. Let’s break it down:

Cash bail is the amount of money that accused defendants “must post to be released from custody until their trial,” according to the American Bar Association. It’s designed to ensure that defendants show up for pretrial hearings — and the trial itself.

Defendants are supposed to get their bail money returned to them after a trial concludes. In New York City, a 3% fee is deducted if you are convicted of a crime. If you are found innocent, you get a full refund.

The fees can range from hundreds to thousands of dollars, and in some cases into the millions. The amount is typically set at someone’s very first court appearance, an arraignment, “when that person is legally innocent,” said Jared Trujillo, policy counsel at the New York Civil Liberties Union and a former public defender.

How Do Defendants Pay Bail?

There are typically two ways to pay. One is cash bail, where a defendant pays the court the full amount set by a judge.

The other is through commercial bonds, where a defendant (or their families and friends) pay a for-profit bail bond company a non-refundable percentage of the bail amount. The company then pays the court the full bail amount.

Cash bail is used in many countries, but the United States and the Phillipines are the only places where the for-profit, commercial bail bond industry is legal.

If the bail amount can’t be paid either way, then the person has to wait in jail until their trial ends.

“Bail is ransom that the government is allowed to charge,” Trujillo said. “This is money that someone has to pay in order to secure their freedom.”

So Why Did New York Change Its Bail Laws?

To understand the present discussion, we need to learn a bit about the past. Prior to 2019, the last time New York overhauled its bail laws was in 1971.

Critics of New York’s old bail laws argued that they penalized poverty, creating a two tiered criminal justice system in which the wealthy can post bail while they await trial while the poor who have to sit in jail. 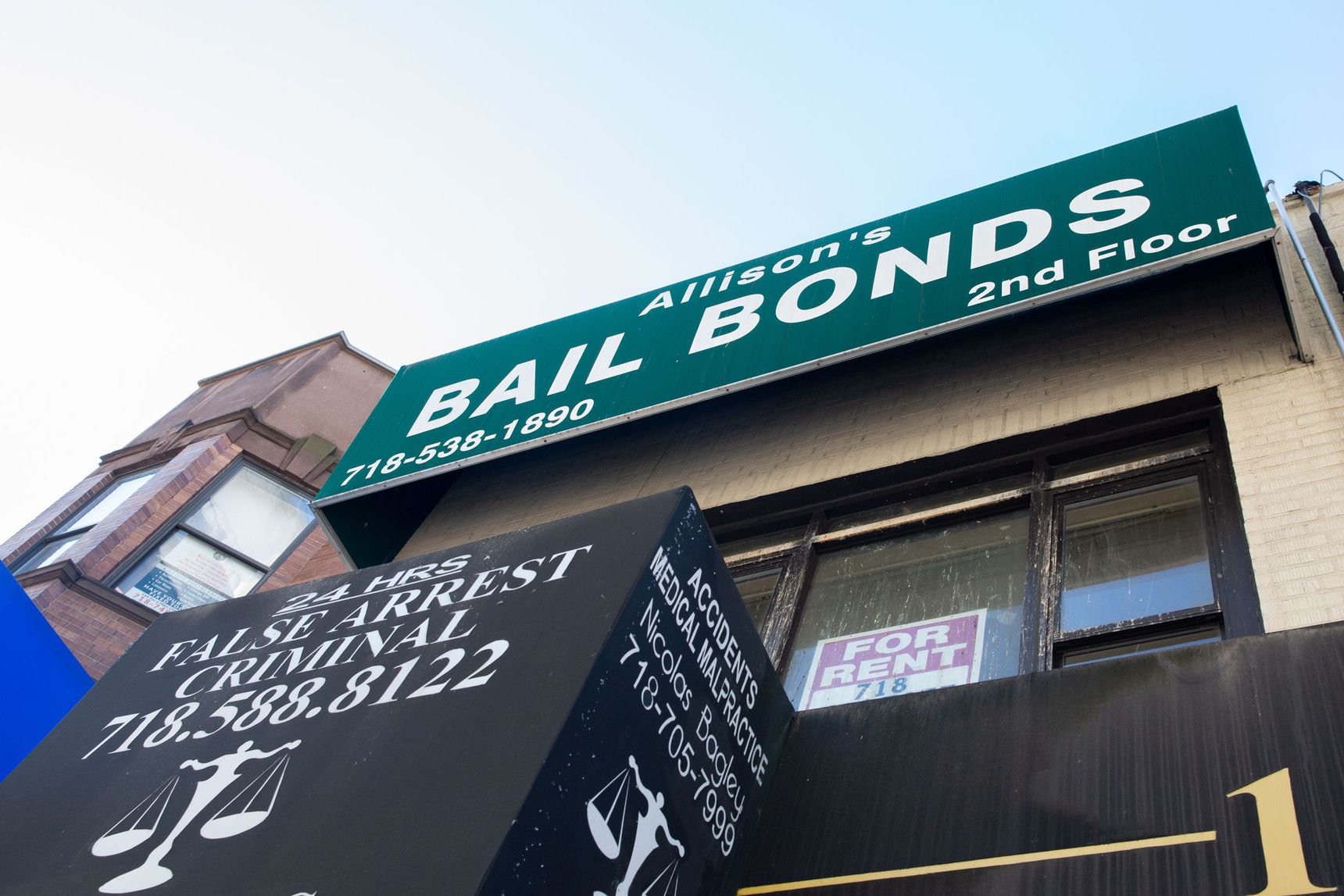 The inequities of the cash bail system were laid bare in 2015 following the death of 22-year-old Kalief Browder. As a Bronx teenager, Browder was arrested for allegedly stealing a backpack. Because his family couldn’t raise $3,000 to post bail, he was detained for three years at Rikers Island, the bulk of the time in solitary confinement.

Browder was released in 2013, after the charges were dropped and went on to speak openly about the toll the time behind bars took on his mental health. He killed himself two years later.

So How Do New York’s Current Bail Laws Work?

Cash bail is prohibited for most misdemeanors and non-violent felonies under the 2019 changes. In these types of cases, judges are required to release people with the least restrictive conditions imposed to ensure they return for their court dates.

For violent felonies and some misdemeanors, such as purposefully trying to prevent someone from breathing, judges have discretion over how to use an arsenal of tools available to make sure a defendant returns to court — such as setting bail, electronic monitoring, surrendering passports or treatment programs. Judges can also hold people in detention pending their trial in very serious cases.

When judges set bail, they have to take into consideration someone’s ability to pay and offer various options, including where either no money is required upfront or only a percentage, known as a “partially secured bond.

What Happened When the Reforms Went Live?

In the days before the reforms took effect on Jan. 1, 2020, a series of anti-semetic attacks in Brooklyn ignited media coverage that connected the attacks with the new laws. Some suspects of the attacks had been released without bail; tabloids and Republican lawmakers seized on the narrative to attack the reforms, which had already been met with skepticism by law enforcement and some judges.

Within days, then-Gov. Andrew Cuomo signaled that the reforms were a “work in progress” and needed to be modified

By early April 2020 — as the state was grappling with an onslaught of COVID-19 cases — state lawmakers made adjustments to the reforms, broadening the list of bail eligible offenses. Among the latest additions is a provision that allows judges to set cash bail for anyone considered a “persistent felony offender.”

Why Is Bail Reform Such a Hot Issue?

In November 2021, Republicans in and around New York City handed Democrats some bruising losses. Their unexpected gains were widely credited to a platform that emphasized public safety and assailed bail reform.

Following his election, Adams — a former cop — surprised fellow Democrats when he said one of his top priorities would be rolling back some of the reforms and allowing judges to consider a defendant’s “dangerousness.”

Facing an increase in crime when he entered office in January — including the shooting death of two NYPD officers, an officer shot by a teenager who was released from custody after posting bail and a stray bullet hitting an 11-month-old — Adams doubled down on his calls to change the laws.

State legislative leaders and key state lawmakers — all Democrats — have remained firm in their opposition to change how bail is done.

Have New York’s Bail Reform Laws Had an Impact?

There are a lot of metrics to look at if you want to measure the impact of cash bail reform. How many people remain incarcerated before a trial? How many people successfully returned to court for hearings or their trial? And how many people awaiting trial were rearrested?

But measuring those things “takes time,” said Amber Widgery, principal of the criminal and civil justice program at the nonpartisan National Conference of State Legislatures. Getting good data is tough, a new policy may take years to be fully implemented, and backlash to it may come faster than definitive results.

In the first year New York’s new bail policies took effect, nearly a fifth of all defendants were rearrested for a crime of any kind, and 2% of the total led to a rearrest for a violent felony, according to the Office of Court Administration.Bronx Criminal Court on East 161st Street, Feb. 15, 2022.

To Trujillo of the NYCLU, there is one definitive positive result so far of the bail reforms: an absence of trauma for people who otherwise would be locked up on Rikers Island. That means that people accused of crimes are able to go to work, stay in social services programs, or are able to take care of their families.

It’s hard to say. It is certainly true that at the same time the bail reforms were going into effect in 2020, violent crime rose in New York — but there was also a pandemic with various devastating economic and psychological effects on society. Many critics of the bail reforms, including former Police Commissioner Bill Bratton in a recent op-ed in the Wall Street Journal, argue there’s a correlation between the spiking crime rate and bail reform.

During this same period, however, violent crime also increased in major cities across the country — without bail reform — and New York’s figures are in keeping with that trend. The city’s crime levels remain relatively low compared to the past few decades, and New York is still safer than many U.S. cities, the Associated Press recently reported.

Where Else Has Bail Reform Been Tried, and What Happened?

First, it’s important to note that, as of now, no state has “fully implemented an elimination of money bail, in law,” said Widgery, of the National Conference of State Legislatures.
Members and sponsors make THE CITY possible.

“Every state still retains money bail on the books, to some degree,” she said.

However, a handful of states have made major changes — or are about to, like Illinois. Here’s what we know about each: