Few consumers step into electronics store thinking, “I’m looking to buy a lemon today. One that’s difficult to repair and which I’ll have to throw away and replace when it breaks.”

Many consumers would opt to purchase electronic devices that last and could be easily fixed. The problem: at present, they don’t know which products so qualify. Yesterday, US Public Interest Research Group (US PIRG), a public interest group active on the right to repair front, issued a scorecard, Failing the Fix, ranking products of the most popular cellphone and laptop makers. 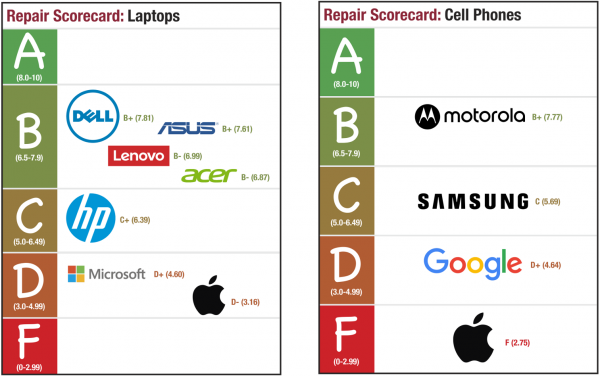 These charts merely summarizes manufacturer repairability scores. The full report includes more detailed information, assessing six criteria. The report is short and I encourage readers to read it in full – especially those readers who are mulling purchasing a cellphone or laptop.

Dodgy products aren’t just an individual problem, but a leading component of the mountain of waste the world – and especially the U.S.- generates. Per the report:

Electronic waste is the fastest growing waste stream in the world, and the U.S. EPA reports that it is now the fastest growing part of our domestic municipal waste stream. Americans spend nearly $1,500 on new electronics per household, per year – and could save a combined $40 billion if they were able to repair instead of replace products and extended lifespans by 50 percent.

To help consumers pick more fixable products, since January 2021, France has required manufacturers to provide a repair score, ranked from 0 to 10, for all products. In collaboration with iFixit, US PIRG used the French scores for 187 products as part of its scorecard ranking ten manufacturers. In addition, according to the report:

Because repairing products is dependent on your ability to get access to necessary repair materials, our grade also reflects companies’ record of lobbying against Right to Repair, or membership in associations which are prominent Right to Repair opponents.

Consumers who seek to purchase easily repairable products – especially those from companies who do not fight to prevent Right to Repair – can use these grades as a starting point for making those evaluations.

Additionally, an analysis of what aspects of repair score higher or lower by manufacturer, such as parts pricing or repair documentation, can help consumers understand what repair challenges might be, and also help manufacturers best address their repair shortcomings.

Dell ranked highest for the ease to disassembly, despite Lenovo recording the best overall scores in the French index. Microsoft devices are much more physically repairable than their French scores might lead you to believe – however, because access to documentation and parts is limited, those devices lose points to result in a 3.87 average grade across their current models for sale in France.

Apple lost the greatest number of points for their active lobbying against Right to Repair and support for other trade groups who are most visible in opposition, with Microsoft also losing points for direct lobbying. Lenovo received the highest scores for availability of documentation (service manuals), as well as parts pricing and availability.

The report separately assessed the repairability of cellphones, and generated a different scorecard:

Looking more carefully at the contributing factors to our grade for cell phones, we again see some disparities between the total French repairability index and the physical ease of opening the device. Samsung had the highest overall score, but a considerably lower score on ease of opening the device relative to Motorola. Apple and Google lost the most points due to their engagement in opposing repair-friendly legislation.

Yesterday, I spoke to Nathan Proctor, senior right to repair campaign director for US PIRG, and author of the report. The pandemic has made people much more aware of the right to repair, as they’ve become increasingly dependent on their laptops and mobile phones. “We’ve never been so reliant on our phones and laptops to work or learn, “ Proctor said. “But when we needed repair the most, many manufacturers took their toys and went home. Apple stores were closed for months when repair needs were most urgent, while smaller shops stayed open.”

In many cases, this meant Apple stores shut, while holding hostage devices consumers had brought in for repair. I didn’t suffer so, but in January, I had to pony up for a replacement laptop, when my laptop suffered a repairable screen crack. Alas, Apple stores remained closed for repairs and the only authorized  repair centers an Apple agent could find had a one week wait for repair. I couldn’t be without a device for a week – or longer – especially as when it broke, with no access to repair services it was uncertain whether the device could be repaired and might have to be replaced anyway. (It was fixable, and I’m using it as a back-up machine.)

This experience will shape my future purchasing decisions. The release of repairability info in France has also affected consumer attitudes. Per the Failing the Fix report:

On behalf of Samsung, OpinionWay investigated how the French repairability index has influenced French consumer attitudes and behavior since its introduction January 1, 2021. Among the key findings are that 71% have heard about the index, and 86% say that the index impacts their purchasing behavior – including 8 out of 10 who indicated they would give up their favorite brand for a more repairable product.

“We hope consumers who don’t want to left out in the cold waiting for a repair will use this guide,” Proctor said. “If you have a Dell computer, you had a very different experience looking for a repair during the pandemic than if you had one of the more restrictive manufacturers we reviewed.”

Ongoing Battles on the Right to Repair Front

The right to repair isn’t just important for consumer electronics. It’s also vital for farmers. “Repair restrictions hurt resilience. We need our phones and laptops, they’ve become essential to just getting through the day, Proctor said. “And it’s not just Apple’s repair restrictions that are concerning. John Deere is pursuing a similar model.”

For farmers, timing is everything. That simple fact has major implications for the right to repair. “[I]n the world of agriculture, everyone is using their equipment at the same time. If your farm is planting, all the local farms are planting. If your farm is haying, everyone is out haying,” Proctor said.

Because John Deere equipment is reliant on the dealer for many repairs, dealerships develop repair backlogs during critical farming windows. Our devices are critical infrastructure, without which we can’t work, or attend school or feed society. We view Right to Repair as essential to protecting that infrastructure.

US PIRG has expanded the battle for a right to repair for farm equipment by filing a complaint against John Deere with the Federal Trade Commission (FTC). Deere currently accounts for 50 percent of U.S. tractor sales. That agency has upped its support for the concept, especially after the appointment of Lina Khan as its chair in June 2021 (See Biden Taps Lina Khan to Chair the FTC,  FTC Votes 5-0 to Crack Down on Companies For Thwarting Right to Repair, and FTC, Where Art Thou?: Appliance Manufacturers Routinely Invalidate Warranties if Customers Use Third-Party Repair Services).

According to an article last week in Motherboard, Right to Repair Groups and Farmers Unions File FTC Complaint Against John Deere:

A public interest research group, farmers unions, and right to repair advocates have filed a complaint with the Federal Trade Commission against John Deere, alleging the tractor manufacturer intentionally makes its products difficult or impossible to repair except at Deere dealerships, making it a monopoly and thus operating in violation of the Sherman antitrust laws.

“While historically Deere has outcompeted rivals to win farmers’ and ranchers’ business, in recent years it has resorted to leveraging its monopoly power in the market for large agricultural equipment to dominate the repair market for its equipment,” the complaint says. “A farmer who purchases Deere equipment today may not realize that Deere, under the guise of technological advancement, has made it impossible for farmers to make important repairs themselves or to go to an independent repair shop. Even where purchasers of Deere equipment are aware that Deere requires important repairs to be performed only by Deere-authorized technicians, Deere’s market dominance leaves these purchasers little to no choice but to submit to Deere’s terms.”

The root problem here is industry consolidation. Per Motherboard

The complaint is asking for formal acknowledgment of what many farmers have been arguing for years: that Deere has cornered the repair market using a mix of digital rights management and its increasingly consolidated dealer network, where most repairs must be done. According to a recent U.S. Public Research Interest Group report—the same group that filed the FTC complaint—more than four out of every five Deere dealers is part of a chain of dealers of seven or more locations. This “mass consolidation,” as USPIRG put it, means that there is one dealership chain for every 12,018 farms and every 5.3 million acres of American farmland. The result is that many farmers have no real choice about where to get their tractors repaired, since all the repair centers near them that can do the repairs are increasingly owned by the same company, which are ultimately part of Deere’s larger network.

Deere has in the past promised to fix some of these abuses – but hasn’t. It’s now high time for the FTC to act. According to Motherboard:

The complaint further alleges that Deere has engaged in “unfair and deceptive trade practices” by claiming it would change these practices but then never actually doing so. In 2018, an industry group representing tractor manufacturers including John Deere said that by January 1, 2021 the companies would make repair tools, software, and diagnostics available to the masses. But that never happened. When shareholders questioned Deere about that, the company blew them off.

More broadly, US PIRG is also pressing for state and federal legislation to enshrine a statutory right to repair. Nineteen states are currently considering right to repairs, according to a US PIRG blog post, Industry scrambling to slow Right to Repair movement as momentum grows.

Passing new legislation isn’t easy.  “I would say there is growing awareness and support, but overcoming the opposition of the vested manufacturers is really hard,” Proctor said. Nonetheless, he’s cautiously optimistic, “Passing a bill will take a lot of hard work and some good fortune — but we’ve passed the point of no return. Right to Repair is here to stay.”

Until either significant state legislation is passed FTC actions prod manufacturers to improve the repairability of their products, the only option for aware consumers is to pay attention to information such as Fixing the Fix’s scorecard in guiding their electronics purchasing decisions.