Yves here. At the time of the 2007 IPCC reports, the Western press did report on how China watered down the report, but otherwise the establishment media has taken very little notice of the depth of political influence over the final reports, and particularly by greenhouse-emitting-interests.

In a recent piece (“This Ironic World: Does Climate Hope Encourage Climate Inaction?”), I wrote:

Contrary to most people’s (understandable) beliefs, the climate crisis in its early stages is here now. (That belief — in a falsehood — is understandable since the world of the wealthy and its media is doing everything possible to delay most people’s full appreciation of the crisis they’re facing now.)

Other commenters are much more dire than the stoic (and government-financed) IPCC.

Yet as we watch, no one is acting on any of this, no one with any real power, which makes the nearly unstoppable even worse.

I want to expand on the middle sentence, and in particular, the phrase “the stoic (and government-financed) IPCC.”

People don’t realize the fact, though it must be true almost by definition, that because the IPCC is a United Nations organization, it must be financed and thus controlled by the governments that finance and control the UN itself. (My emphasis below.)

And while it “provides objective and comprehensive scientific information on anthropogenic climate change” and “does not conduct original research nor monitor climate change, but rather undertakes a periodic, systematic review of all relevant published literature,” it has to analyze and interpret that literature, and therefore explain it.

Thousands of scientists and other experts volunteer to review the data and compile key findings into “Assessment Reports” for policymakers and the general public[.]

These Assessment Reports — the latest, AR6 or the Sixth Assessment Report, is being released in stages this year — consist of massive tomes delivered by its three working groups plus a “Synthesis Report” covering the whole release. (You can find the latest assessment reports here). 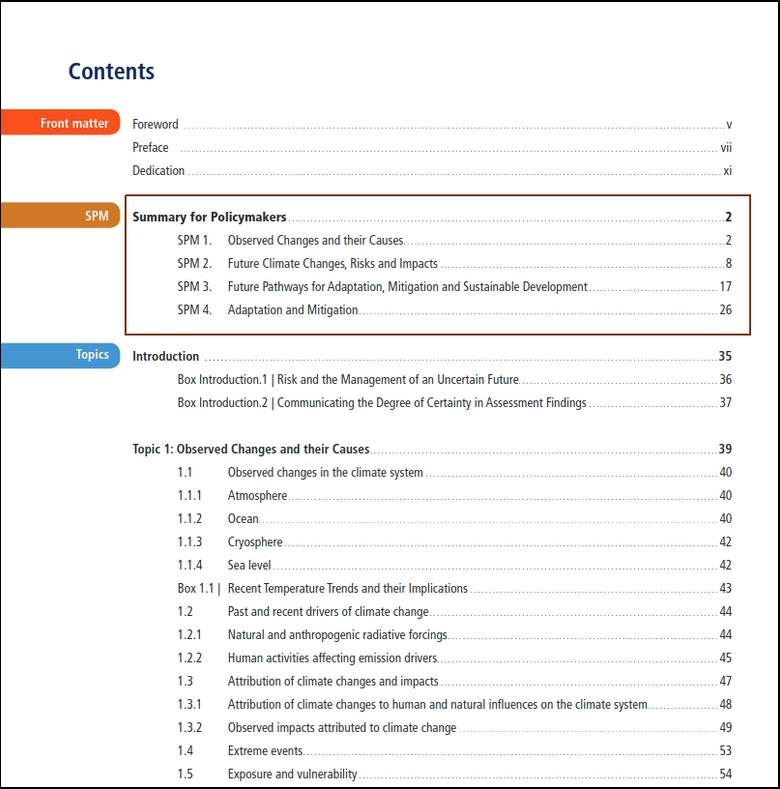 The content portion of the SPM for AR5 was just 30 pages — an easy read before the champagne portion of your private jet commute from LA to Wall Street, for example, or prior to your having to face an interview with a big-media reporter, who herself has likely read only the SPM, and then perhaps just before interviewing you.

Because of their importance, the various SPMs are always downloadable separately. Here’s the SPM for the AR5 Synthesis Report for those who wish to peruse it. The Synthesis Report, and thus its SPM, for AR6 will be out in this fall.

(Each of the working group reports are similarly layered. Each contains a massive full report, a Technical Summary, and a Summary for Policymakers of its own. For the AR6 Working Group I report, just released, the whole report is 1300 pages, the Technical Summary is 150 pages, and the SPM is less than 40 pages.)

Oil-Controlling Governments Care That the Reports Be Toned Down

Why go through all this? Because these two facts taken together…

…mean that the meeting to “finalize” the SPM chapters in particular, and the Synthesis Reports in general, are real fights. And political ones. Representatives of oil-controlling governments (like Saudi Arabia) and oil-controlled governments (like the U.S.) are in the room and battle over every nuance of every word, trying to keep oil and gas — burned carbon — as the world’s primary source of energy, even as that carbon burns us all.

Hardly any of this kind of battling gets reported, but it sometimes does. Here’s a small sample from the invaluable George Monbiot about the AR4 SPM process:

The drafting of reports by the world’s pre-eminent group of climate scientists is an odd process. For many months scientists contributing to the Intergovernmental Panel on Climate Change tussle over the evidence. Nothing gets published unless it achieves consensus. This means that the panel’s reports are extremely conservative – even timid. It also means that they are as trustworthy as a scientific document can be.

Then, when all is settled among the scientists, the politicians sweep in and seek to excise from the summaries anything which threatens their interests. While the US government has traditionally been the scientists’ chief opponent, this time the assault was led by Saudi Arabia, supported by China and Russia(1,2).

The scientists fight back, but they always have to make some concessions. The report released on Friday, for example, was shorn of the warning that “North America is expected to experience locally severe economic damage, plus substantial ecosystem, social and cultural disruption from climate change related events”(3). David Wasdell, an accredited reviewer for the panel, claims that the summary of the science the IPCC published in February was purged of most of its references to “positive feedbacks”: climate change accelerating itself(4).

This is the opposite of the story endlessly repeated in the right-wing press: that the IPCC, in collusion with governments, is conspiring to exaggerate the science. No one explains why governments should seek to amplify their own failures. In the wacky world of the climate conspiracists, no explanations are required. The world’s most conservative scientific body has somehow been transformed into a cabal of screaming demagogues.

From the underlying David Wasdell report:

The constitution of the IPCC WG1 carries within its structure a conflict of interests which lays it open to the charge of collusion in the management of scientific analysis of climate change. It is hardly surprising that the resultant Summary for Policy Makers was immediately welcomed and affirmed as acceptable to the Washington Administration. Denial has now yielded on the issues of the reality of the occurrence of climate change and its attribution to anthropogenic causes. It has moved ground to the denial of amplifying feedback, acceleration of climate change, non-linearity in system behaviour and potential feedback-driven instability.

The outcome is a document which lays a necessary but far from sufficient basis for the formulation of strategic policy. Despite the best efforts of the global scientific community, pursuit of goals based upon this Report may contribute to the sustained profitability of the hydro -carbon- based industries, but they do not get to first base in the task of preventing catastrophic climate change.

Elsewhere regarding one of the AR5 SPMs, Wasdell has written (as quoted by the Guardian):

“Greatest pressure to establish grounds for the highest possible budget came from those countries whose national economy, political power and social stability depend on sustaining the asset value and production revenue derived from exploitation of their resources of fossil energy. Additional pressure was applied to the political agents by those vested interests whose sustained profitability was based on the extraction, refining, marketing and use of fossil energy as the ground of the global economy.”

The headline of that Guardian article is “IPCC reports ‘diluted’ under ‘political pressure’ to protect fossil fuel interests”. Worth checking out.

The “vested interests” of the global economy control the process, even at the IPCC. They control not only what gets said in the summaries, but also what gets said clearly, plainly.

All of this makes stories like the following both remarkable and not remarkable at all, an in “everything new is old again” sort of way. This is from just last year, at end of the COP26 international climate meeting in Glasgow. (“COP” means “Conference of the Parties,” the 195 member states that control the process. It’s an intergovernmental meeting of principals.)

The Glasgow climate pact keeps the hope of 1.5 alive, barely.

COP26 president Alok Sharma held back tears as he accepted India’s last-minute motion to weaken the summit’s pledge to “phase out” coal. Sharma had been saying for months that he wanted COP26 to “consign coal to history.” And until India insisted otherwise at the 11th hour, it looked like the summit might achieve that scientifically imperative task.

But United Nations climate negotiations operate by consensus: Each of the 197 participating nations can veto the majority. In effect, India—with China’s support—had threatened to block the agreement entirely if the goal were not softened from a “phase-out” to a “phasedown” of coal.

India and China killed the death of coal, because they wanted to and because they could. They thought it was in their interest, even though it’s in no one’s interest at all.

Where Does This Leave Us?

That’s why it’s important that the UN not be the guardian and owners of the go-to reports it issues. Because the owners of the UN want to make sure those reports are not understood. And they’re succeeding.

Which leaves us with this: It looks like nothing will happen until nothing that can happen will matter much at all. After that, the pathological wealthy will have to find another way to rule the world, this time a collapsing one. And we’ll have to live in it. Just because we don’t see that world today — or even see it coming — doesn’t meant it’s not, like Titanic’s giant iceberg, breathing its frozen breath on all our faces.