Yves here. John Helmer makes a bombshell revelation in his latest post, that Ukrainian President Volodymyr Zelensky participated in an in-person summit on March 15, not as widely touted in Ukraine, but in Poland. It is virtually certain that given the difficulty of assuring safe passage that Zelensky has not returned to Kiev.

This allegation matters because it vitiates the effort to depict Zelensky as the second coming of Winston Churchill, heroically holed up in his capital as bombs are falling. Zelensky staying, or appearing to stay, in Kiev, is also a rallying point for the sure-to-lose-but-still fighting Ukrainian army and the civilians who still unrealistically hope that Ukraine can win on the battlefield.

Admittedly, Helmer relies significantly on the debunking of visual evidence….which has not proven difficult to do with a lot of Ukrainian propaganda. Helmer was a master well before the wor, having made the downing of MH-17 a pet project (he not only finely parsed photographs, but made careful readings of inconsistent and shifting claims of experts and prosecutors).

One might point out that showing that the official visual narrative of the meeting is faked does not necessarily prove that Zelensky was not in Kiev. Helmer presents other evidence that supports his contention, including reports from sources in Poland. What I found was compelling was that it was utterly implausible that the Polish, Czech, and Slovenian leaders made a long, overland trek to Kiev, as official accounts claimed. That would be disastrously risky in the absences of Russian assurances of safe passage, which were never made. That then begs the question of what actually happened.

I hate this Bellingcat-style analysis because absent a very trusted source, there’s no getting to the bottom of what’s photoshopped and what isn’t.

That said, Helmer is trusted, things like railway stations and “Presidential seating style” can be independently checked, and the argument about railways seems dispositive. (I’m also persuaded by the military haircuts on the so-called reporters.) 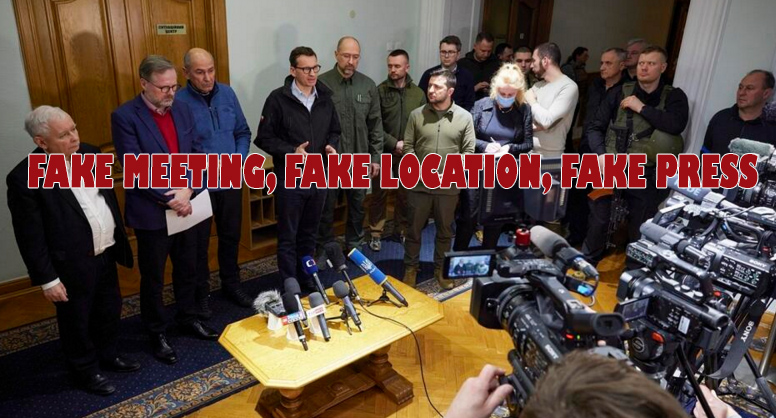 The summit meeting of East European leaders, hosted in Kiev by Ukrainian President Vladimir Zelensky on March 15 was fabricated by the Polish government, with Polish secret service agents playing the part of journalists, and fake photographs of the meeting, press briefing, and train journey prepared by Zelensky’s press office.

The operation was designed by the Poles to promote their role in support of the Ukraine, the Ukrainian refugees, and in defence of Europe against Russia, and seek new European, American,  and NATO alliance funds and military equipment.

A according to the Ukrainian publicity, the operation was designed to promote the appearance that Zelensky’s regime is in control of Kiev, and to accelerate their application for admission to the European Union (EU).

The Anglo-American media have reported the meeting, as announced by Petr Fiala, the Czech  prime minister, with “the aim…to express the European Union’s unequivocal support for Ukraine and its freedom and independence,”

The result of the summit meeting, according to the Financial Times in London, was “a show of European solidarity even as Russian shelling continued on residential neighbourhoods in the Ukrainian capital. The trip by the prime ministers of Poland, the Czech Republic and Slovenia is the most high-profile visit to Kyiv since Russia invaded the country on February 24.”

“It is here, in war-torn Kyiv, that history is being made,” the Polish prime minister Mateusz Morawiecki announced. “It is here that freedom fights against the world of tyranny. It is here that the future of us all hangs in the balance.”

Morawiecki and the western press were lying – there was no meeting in Kiev. Instead, the meeting was staged at the Polish rail junction town of Przemysl, 95 kilometres west of Lvov (Lviv), and 20 kms inside the Polish frontier with the Ukraine.

In a report published by the Associated Press (AP) bureau in Warsaw, “the long journey over land from Poland to Kyiv by Morawiecki, Poland’s deputy Prime Minister Jaroslaw Kaczynski and Prime Ministers Petr Fiala of the Czech Republic and Janez Jansa of Slovenia sent the message that most of Ukraine still remains in Ukrainian hands.”

The evidence gathered from sources in Warsaw and from analysis of the videos and photographs published on the meeting proves there was no “long journey”; no meeting in Kiev or in Lvov, the Galician region capital, which is the operating headquarters of the Ukrainian government. From the evidence provided by the Poles and also by the Zelensky’s publicity staff, it is now clear that only a small part of western Ukraine remains in Ukrainian hands.  Zelensky himself is now in Polish hands.

The Warsaw sources say the idea for the summit meeting was initiated by Polish Deputy Prime Minister Jaroslaw Kaczynski. Since the death of his twin brother in an aircraft crash at Smolensk, Russia, in 2010, Kaczynski has been one of the most influential politicians in Poland; he is in charge of the defence, security, interior and justice ministries.  He is fiercely anti-Russian. 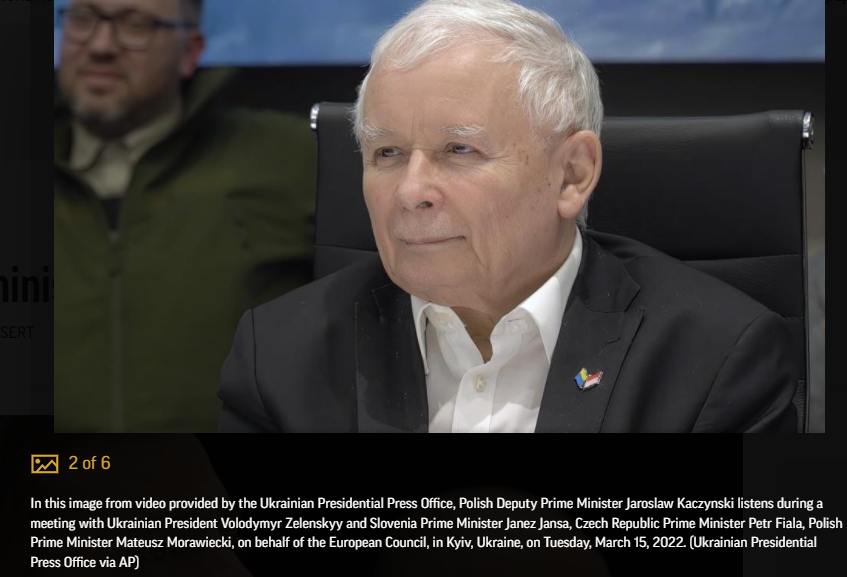 Associated Press (AP) presented this photograph of Kaczynski at the summit meeting with the disclaimer that it did not originate the photograph itself. Instead, it had been supplied by the “Ukrainian Presidential Press Office.”

The Polish sources believe there was no possibility that Kaczynski, Prime Minister Morawiecki, or the Czech and Slovenian delegations would have applied to Moscow for safe conduct to Kiev; nor would they have risked their own security by running the gauntlet of Russian electronic and air surveillance and missile attack on a two-hour train journey from Przymysl to Lvov, or on the seven-hour journey to Kiev.

Instead, the Czech and Slovenian officials flew into Rzeszow Jasionka,  the nearest airport to Przemysl; the airfield is also a NATO logistics and security base. They then drove to Przemysl. There the Ukrainians had despatched one of the luxury versions of the regular train service between Przemysl, Lvov, and Kiev. This had been fitted up for fabricated photographs of the Polish, Czech and Slovenian officials meeting as they purportedly travelled towards Zelensky in Kiev.  The press which has published these pictures knows them to have been faked and has assisted in concealing the real location.

The red line is known as Rail Line No. 92 -- https://mediarail.wordpress.com// and  https://pl.wikipedia.org/ 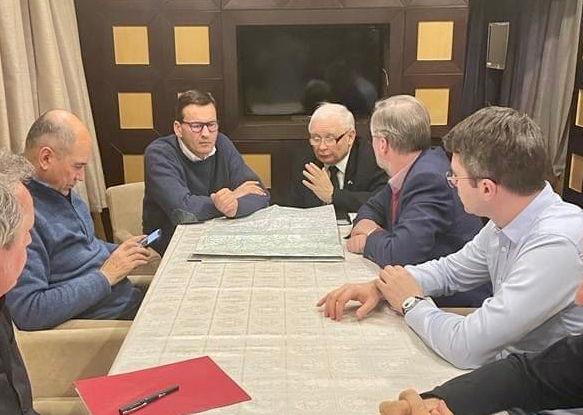 In a converted train compartment, left to right: Jansa of Slovenia; Morawiecki and  Kaczymski of Poland; Fiala of the Czech Republic. The individuals on the extreme left and right cannot be identified. The red file on the table appears to be standard issue for the Polish intelligence services which report to Kaczymski. 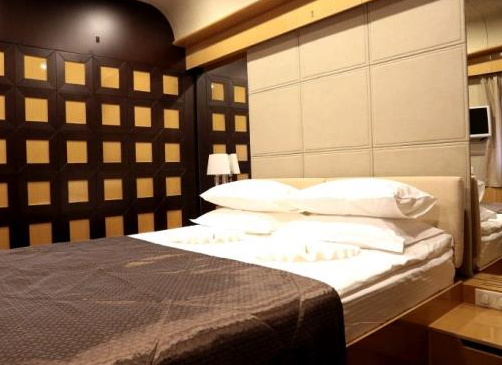 Advertising for the train’s luxury suites confirms the train depicted in the publicity photographs. Source: https://www.rynek-kolejowy.pl/ 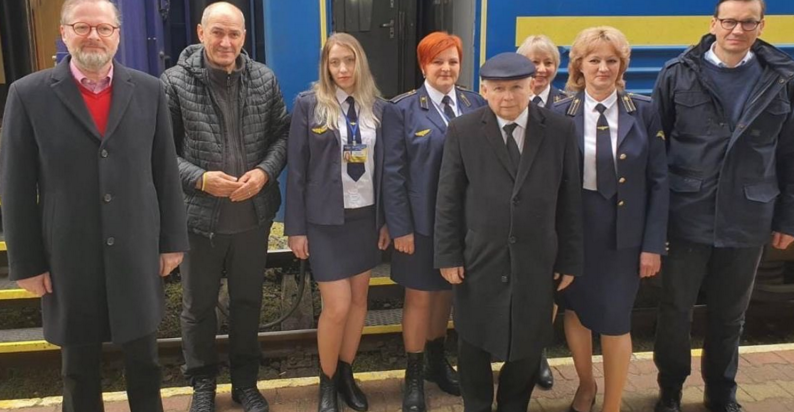 Left to right: Fiala, Jansa, Kaczymski taking the lead position in front of the group, and Morawiecki.

Top: shadows at the feet of the official group photograph reveal the picture was taken in the open-air, sun-lit section of Przymysl station as revealed in the photograph at bottom. All photographs confirm the paving design of the rail platform is specific to Przemysl. 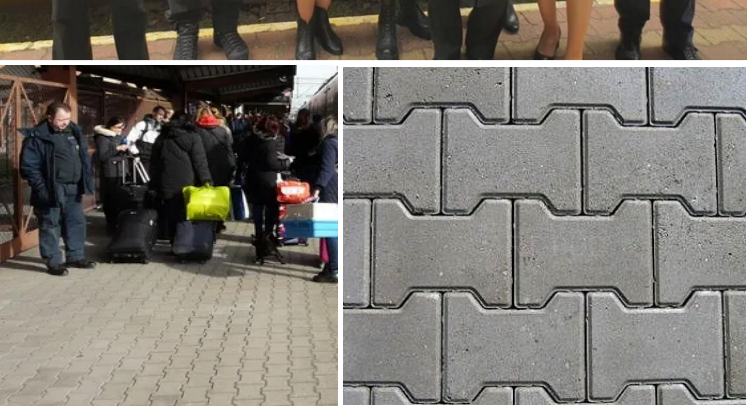 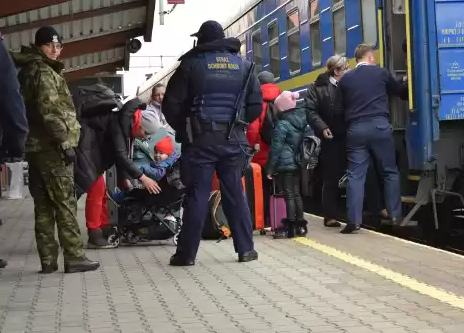 Left, the interior of the Kiev railway station; right, Lvov. The platform paving is similar in Kiev and Lvov but quite different at Przemysl.  The roofing of the two stations covers the length of the platform and allows no open-air section as at Przemysl. 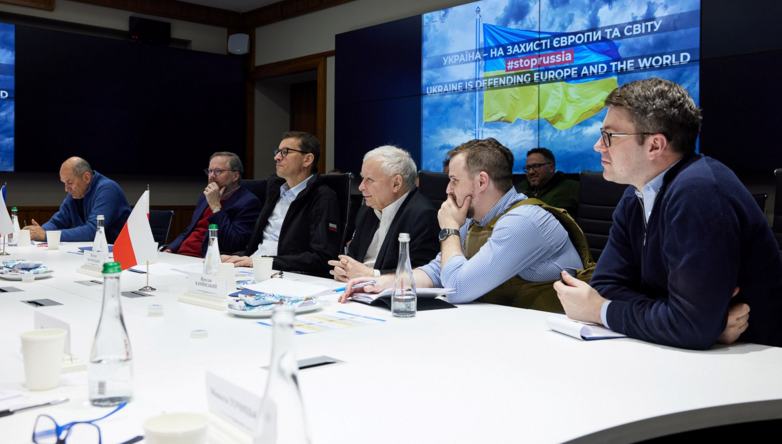 The staff man on Kaczynski’s left is wearing a bullet-proof vest indoors, indicating he is from the Polish secret services and has either forgotten he is pretending to be in the Kiev presidency safely under Ukrainian control, or else he has forgotten he is supposed to be a civilian. The video screens with the Ukrainian propaganda slogans on both walls  appear to have been photo-shopped in the preparation of the photographs by Zelensky’s press office.

The picture on left has been tagged as an official one by Zelensky’s staff for publication on their Facebook account. The Ukrainian symbol on the wall is unlike those fixed to the walls of presidential meeting rooms in Kiev.  The right picture is a closeup of the paper cups on the table. They are evidence of an improvised meeting room, not one at Zelensky’s office in Kiev. Likewise, the contemporary-style chairs shown are incompatible with Ukrainian presidential seating style.

PRESS CONFERENCE OUTSIDE THE MEETING ROOM 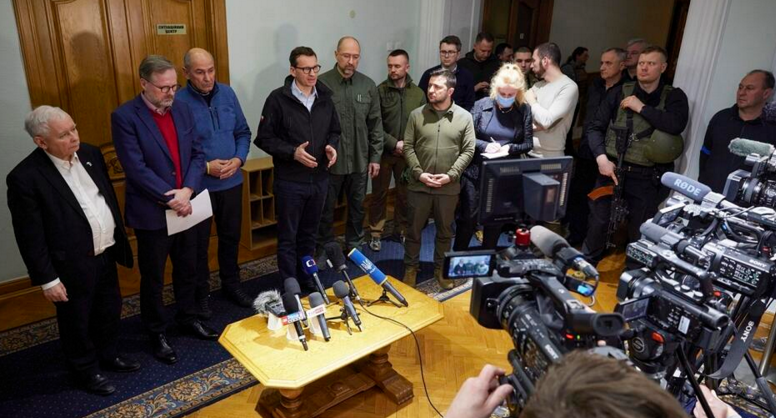 The sign pasted to the door over the heads of Fiala and Jansa says “Situation Room” in Ukrainian. It has been improvised. If the meeting had taken place in a genuine situation room, the absence of computers belies it.

Left, interior camera set-up for the media; right, reporters shown at the exterior of the building. All the purported journalists are men with military haircuts; no women appear to have been included in the press briefings.

The Associated Press (AP) – a US-owned corporation based in New York  — has provided the most detailed bulletin on the meeting, its participants,  and what they discussed. The agency byline reveals that its reporters filed their story from Warsaw; they were not present at the events they claim to have verified. The only direct source for the AP report was reported to be a Polish official who was reported as saying:  “The visit had been planned for several days but was kept secret for security reasons, said Michal Dworczyk, chief of staff for Morawiecki”.

In the fine print under AP’s publication of photographs of the meeting, the agency issued a  source disclaimer. The images came from “video provided by the Ukrainian Presidential Press Office”, AP said.