Glenmark launches Nitric Oxide spray against COVID Economic Times. “[Nitric Oxide Nasal Spray (NONS)] is also approved and being sold in Israel, Thailand, Indonesia and Bahrain, under the name enovidTM or VirXTM….By virtue of the CE mark, SaNOtize has permission to launch NONS in the EU.”

* * *
WHO says global rise in COVID cases is ‘tip of the iceberg’ Reuters
* * *
I was under the impression that MIT professed science?

Saw this yesterday and it’s on the MIT now website too ? pic.twitter.com/bHW8C0zNyx

The thread is scathing. Another example:

Very similar wording at UMass Amherst. “Individuals and departments cannot create mask requirements separate from or more restrictive than university requirements, nor should they attempt to influence mask wearing through signage.”

As we know, elites — i.e., donors — really, really hate masking requirements, so it’s quite natural that college administrators would follow their lead.

Is occurring at the time when “Britons less cautious over Covid than at any point during pandemic” /2 pic.twitter.com/RFFYnKQLEE

When I agree with Zeke Emanuel, you know @CDCgov has done something horribly, horribly wrong to disabled Americans

MORE THAN ONE THIRD Eschaton. As we say, “I have no words” for how grotesque the propaganda campaign for “Let ‘er rip” has become. And again, it’s a real triumph in what I suppose we must call “governance” that our ruling class is running two unprecedently massive propaganda campaigns at the same time, the other being Ukraine. People keep saying how badly newsrooms have been cut, but nobody gives credit to the press for their very real achievements!

Mortality Among People Experiencing Homelessness in San Francisco During the COVID-19 Pandemic JAMA. “Deaths among people experiencing homelessness in San Francisco more than doubled to 331 deaths during the first year of the COVID-19 pandemic, driven by a large increase in overdose deaths. No deaths in our data set were due to COVID-19 itself, which may speak to the success of San Francisco’s efforts to mitigate the spread of the virus in vulnerable populations, including by moving individuals at high risk into noncongregate settings. However, the pandemic had far-reaching effects on outreach, health, and social services (eg, temporary closures or reduced hours for drop-in behavioral health facilities; decreased capacity in residential facilities to allow social distancing; and staff redeployments to COVID-19–related roles) that may have contributed to increased mortality from non–COVID-19 causes.”

What the Media Might Have Missed About South Korea’s Elections RAND. They might have missed this too:

Every Democratic Party president-elect won Seoul. Lee Jae-myung lost the election by about 240k votes, and lost Seoul by about 310k. That’s it, that was the difference.

Inside Patna’s exam hub, where a million hopes die every year Scoll.in

US supplied bomb that killed 40 children on Yemen school bus Guardian. I don’t think it’s “whataboutism” to point out that the waterworks get turned on and off on a highly selective basis.

These Afghans Are Using a Giant Slingshot to Shoot Drugs Across the Border Vice (Re Silc). Man the tool maker.

Pentagon May Boost Troop Presence In Somalia Defense One. Feeling their oats.

Opinion: Zelenskyy is the leader of the free world now Detroit Free Press

Volodymyr Zelensky’s Comedic Courage Adam Gopnik, The New Yorker. “Zelensky is an imperfect democrat, as was Churchill, as are we all. (His relationship with the media oligarch Ihor Kolomoisky is a subject for probing.)” If I ever meet Gopnik, I must congratulate him for penning the most New Yorker-ish parenthetical ever. On Kolomoisky, see NC here.

* * *
The Azov Battalion: Extremists defending Mariupol Deutsche Welle (Re Silc). “The Azov Regiment wants the symbol from the Nazi era to be understood as stylized versions of the letters N and I, standing for ‘national idea.'” Why do I not find this reassuring?

US rallies to Ukraine’s side as rescue expands after theatre bombing FT. Mariupol is run by the Azov Batallion, so I’d trust anything that comes out of there as far as I can throw a concert grand piano, and that includes aerial imagery. More on the Asovs:

This is full-scale Nazi apologia from the Ukrainian Ambassador to Germany:

“Ukrainian ambassador to Germany: stop demonizing the Azov battalion, as they are courageous fighters protecting their homeland, and this is playing into Russian propaganda” — @Emilydische. pic.twitter.com/GE4Oo4HV7L

I do not think “elite” means what Louise Mensch thinks it means:

So, a FOURTH Russian Major General eliminated by Ukraine’s elite Azov regiment in Mariupol. UA military expert Olexander Kovalenko pointed out on his Telegram channel that @DefenceU have eliminated “almost a General a week”. GLORY TO UKRAINE!

At least, I hope not.

And more on the Ukrainian right:

Watch Yevhen Karas the leader of Ukraine’s neo-Nazi terror gang C14’s speech from Kiev earlier this month. Straight from the horses’ mouth, he dispels the many narratives pushed by the left, the mainstream media and the State Department. pic.twitter.com/VWJqWPUGUp

These guys make our “Proud Boys” look like the cosplayers they are.

The Russian ‘denazification’ PR disaster: How, why and what to do The Saker

Putin is the only major leader to utter a few simple truths about the role of the United States in the world today (interview) Perry Anderson, Salon. From 2015, still germane:

[ANDERSON:] The conflict that exploded in 2013-14 was not, however, inevitable. It was open to Obama and his European partners to say to Putin: “We realize you have a very large interest in this country and we will guarantee not extend NATO to it. You should not interfere so much in its domestic politics, because that invites us to do so. But strategically we can agree on a mutual hands-off, like the Austrian Neutrality Treaty [the Austrian Independence Treaty, signed by the Western allies and the Soviet Union in 1955]. Austria flourished after that. Why not Ukraine? The mentality of the hegemon precluded this.

Did a UK leftist get the terms of a Ukraine settlement right seven years ago? Ah well, nevertheless….

Former top Pentagon advisor Col. Doug Macgregor on Russia-Ukraine war (podcast) Aaron Maté, Pushback. Hoisting this again, in case morning people in the readership want something to listen to with their coffee:

Here is a YouTube extract from the show, with an interesting perspective on the military situtation:

From that YouTube, a map of military position, not so different from the others, but showing the roads and (I think) the “kettles” 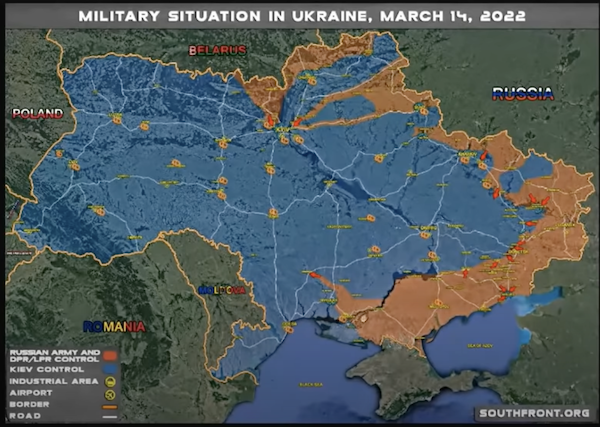 Macgregor also makes the point that the Russians have left the wheat-growing areas alone, so far. Not entirely, but there aren’t tank tread-tracks all over central Ukraine, either. 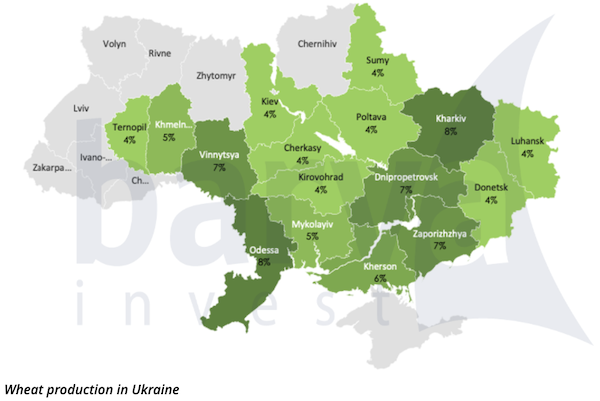 * * *
NATO proposes a major force expansion in Europe to address the long-term threat posed by Russia WaPo. Atlanticists getting their cut before a pivot to China.

Lessons In Restraint From The Hungarian Revolution The American Conservative

White House warns free Covid treatments are at risk as subsidies run out Politico. “But a spending dispute prompted House Democrats last week to pull $15.6 billion in Covid aid from a broader omnibus package, and there is no clear path in Congress for passing that money in a separate bill.”

Opinion: Two years into covid-19, has Congress learned nothing? Leana Wen, WaPo. They have learned what their squillionaire donors want, and that is what they are doing.

Who Qualifies For $6 Billion In Student Loan Forgiveness Announced By Biden Administration Forbes. There are, naturally, complex eligibility requirements.

The U.S. Is the Only Sanctions Superpower. It Must Use That Power Wisely. NYT

This thread, and the nested thread, provide an overview of the impact of sanctions:

@jayohardeeayen sent me to this interesting thread on the impact of #sanctions on the #RussianEconomy. It’s a well thought out and grounded analysis, so no hate even as I nit pick. @IlyaMatveev_ talks trade, currency reserves, globalization, and downstream impact on Russians. https://t.co/PJJPeqET3F

What If This Is Just the Way Things Are Now Anne Helen Peterson, Culture Study

Modern Capitalism Is Weirder Than You Think It Is New York Magazine. Well worth a read.

Column: Is it better to protect banks or people during crisis? Now we have an answer Michael Hiltzik. Fiscal stimulus (Trump + Biden) is better than monetary stimulus (Bush + Obama). Now, about those million people who don’t seem to have been protected that well….

What is killing the millenials? Unacceptable Jessica 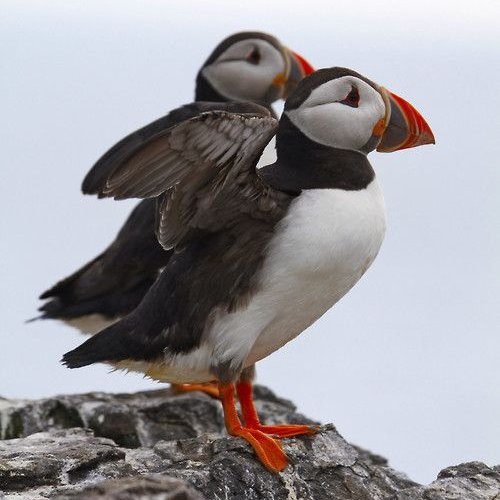