Jerri-Lynn here. Positive climate change stories give us hope. But does that hope spur indifference? Tom Neuburgur considers the conundrum.

I recently did a piece, “Everything New Is Old Again,” about the strange world of climate news we currently inhabit, a world “tucked between the start of a world-historical collapse and stories about it so old they sound not special at all.”

This is another tale of disconnect. A number of recent climate articles have reinforced the dissonance between predictions of coming catastrophe on the one hand (though perhaps, in readers’ minds, too far off to be taken seriously), and stories that offer hope and renewal, in particular energy renewal and transformation.

The Warnings Just Get Worse…

From the FAQ section, part of the answer to FAQ 1 says this (emphasis mine throughout):

FAQ 1: What are the new insights on climate impacts, vulnerability and adaptation from IPCC?

Climate change is affecting nature, people’s lives and infrastructure everywhere. Its dangerous and pervasive impacts are increasingly evident in every region of our world. These impacts are hindering efforts to meet basic human needs and they threaten sustainable development across the globe.

The continued explanation includes phrases like “extreme events are increasingly impacting nature and people’s lives everywhere” … “magnitude of climate change impacts are larger than estimated in previous assessments” … “severe and widespread disruption in nature and in society”. In short, “the impacts of climate change are affecting billions of people in many different ways.”

And worse is coming:

Climate change impacts are expected to intensify with additional warming. It is also an established fact that they are interacting with multiple other societal and environmental challenges. These include a growing world population, unsustainable consumption, a rapidly increasing number of people living in cities, significant inequality, continuing poverty, land degradation, biodiversity loss due to land-use change, ocean pollution, overfishing and habitat destruction as well as a global pandemic. Where trends intersect they can reinforce each other, intensifying risks and impacts, which affect the poor and most vulnerable people the hardest. [emphasis added]

Contrary to most people’s (understandable) beliefs, the climate crisis in its early stages is here now. (That belief — in a falsehood — is understandable since the world of the wealthy and its media is doing everything possible to delay most people’s full appreciation of the crisis they’re facing now.)

Other commenters are much more dire than the stoic (and government-financed) IPCC.

Yet as we watch, no one is acting on any of this, no one with any real power, which makes the nearly unstoppable even worse.

At the other end of the spectrum are stories like the following:

A Norwegian technology company has found a way to stop livestock slurry from releasing methane — by zapping it with artificial lightning. …

A manure scrapper collects all the excrement from the barn floor and deposits it in a pit where it is then moved through the N2 machine, housed in a standard-sized shipping container. Nitrogen from the air and a blast from a 50 kilowatt plasma torch is forced through the slurry ‘locking in’ both methane and ammonia emissions.

“When we add nitrogen from air to the slurry, it changes the environment to stop methanogenesis basically. So it drops the pH down to just below six and we’re catching that early. So it stops the breakdown of those methane microbes that then release the gas to the air,” Puttick said, adding their patented technology is the only one of its kind.

What comes out of the machine is an odorless brown liquid, called NEO — a Nitrogen Enriched Organic fertilizer.

An excellent idea, and nicely implemented. Stopping methane from agriculture matters a lot. This doesn’t address directly emitted methane, but cheaply removing methane from dung is a considerable accomplishment.

A team at Harvard University made news in May 2021 when they published findings that their lithium-metal cell held its charge over an astonishing 10,000 cycles.

At 10,000 cycles, we could reset our expectations for battery life, says Xin Li, Ph.D., one of the Harvard researchers behind the battery. “[It] could be as long as 25 years or even half a century.” …

“This new technology could mean recharging a car in the same time required to fill a gas tank.”

Fewer batteries producing significantly more power — the inverse of planned obsolescence. And this:

Industry uses a god-awful amount of heat, which typically used to be delivered through natural gas. … As [traditional energy] prices started creeping up, the cost of renewable power — solar and wind, primarily — started plummeting. In some parts of California, this has gotten so extreme that during parts of the day, generation outpaces demand and the grid’s capacity to absorb it all by quite a bit. The result is that there are parts of the day where electricity is so cheap it may as well be free — but it has nowhere to go.

Rondo Energy to the rescue. It has developed a new way to store all that power; not in the form of electricity, but in the form of heat. Heat has the benefit of being extremely fast — you don’t have to worry about the speed that a Lithium battery can absorb electricity. Essentially, you just throw the electricity through a massive resistor, which heats up to ridiculous temperatures. Now all you need to do is to capture the heat for later.

“We’re storing heat as very high-temperature energy in solid materials. The truth is, my coffee thermos holds more energy than a laptop battery, a lot more cheaply. For the heating — there’s no magic there: your toaster and hairdryer uses the same technology for generating heat as we do. We developed a new combination of materials for the storage. You can then deliver heat continually by circulating air into the stack of that material and getting superheated air out,” explains O’Donnell. “Then we either turn that heat into steam in a conventional boiler or we deliver directly to users with high-temperature needs, such as making glass or cement. This is a technology that operates at a small fraction of the cost of an electrochemical battery and maybe more significantly, roughly twice the efficiency and half the cost of any hydrogen system. [emphasis added]

Another fine idea and implementation. Why spend the money — and carbon — making heat from methane when it could be captured from the grid when supply exceeds demand, stored as heat, and then redelivered to customers, in many cases directly as heat without further conversion?

There are a great many stories like these; I’ve featured some of them myself. They inspire hope — and not unwarranted hope in light of the accomplishments they detail.

A World Awash in Irony

So why do we see such a disconnect between the two sets of stories, the tales of hope and despair?

I would suggest, first, that as encouraging as the hopeful stories are, the accomplishments are either (a) not significant enough to affect meaningful climate mitigation, or (b) significant but unimplemented at scale because, frankly, no one with power sees any urgency in implementing them.

It’s even possible that the existence of the positive stories, accurate as they are, helps continue the climate apathy that works against their implementation. In other words, the solutions aren’t implemented simply because they do offer solutions and comfort, so they demotivate the comfortable, including those in charge (of making sure they make money no matter what).

It’s an interesting dilemma. Are positive climate stories a cause of their own ineffectiveness? Or in Shakespeare’s phrase, can an organism be “consumed with that which it was nourished by” — eaten by what feeds it?

In some cases, yes — an overpopulation of lab mice in a confined space, fed by successful breeding, accelerates all of their deaths. Is that true of positive climate stories as well, that their success in creating hope delays their implementation?

If so, it would be one more irony in a world flushed full of them.

For example, is mankind’s supreme gift, our social adaptability, the reason this generation won’t free itself from the pathological spiral forced by the rich who rule us? If true, this would be the first case I know of where a species’ adaptability caused its own inaction in the face of danger.

Of course, the greatest irony of all is the “gift of fire.” 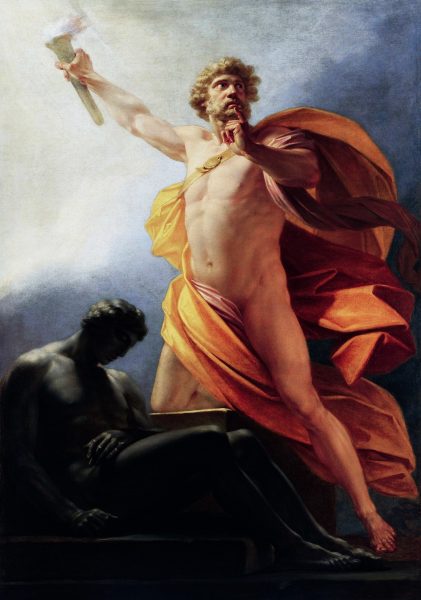 The titan Prometheus, bringer of fire, as heroic figure. Here the artist emphasizes the gift, not the crime.

Prometheus gave us fire, which made us dominant. Now we have to give it back or die, consumed by that which fed us.

Another irony for an ironic world.