Yves here. On the one hand, it’s a step in the right direction to see some policy thinkers grappling with the issue of aging and the rising need for long-term care. On the other hand, the thinking is still blinkered. First, it’s fuzzy at best on the fact that some elderly people can still get by at home with part-time care (it talks about different levels of need but it’s not clear if these are all within institutional settings or not). Of course, they might live longer that way. Second, there are also community options that could be integrated with part-time care. For instance, in Italy, one town I visited briefly had what amounted to a day-time elder care center, a sitting room with a TV, hot and cold drinks, light snacks, reading material, game boards, and a nice view. It looked comfy and the door was open, so I suspected they also welcomed people from the ‘hood stopping by to visit if they had the time and inclination.

I suspect it was designed just like child day care, for working families that had an elderly parent at home and were worried about leaving them alone all day…or maybe the older relative was extroverted and wanted to be out with other people.

Third, however, this post fails to acknowledge that proper long-term care violates Lambert’s second rule of neoliberalism: “Die faster!” The US discovered with the advent of long-term care insurance that funding an industry of retirement centers did keep older people healthier and therefore living longer.

Fourth, it does not consider the impact of long Covid on disability and therefore long-term care demand. It’s not hard to imagine a lot of people will either stop working earlier than expected and/or will have to go to part-time work.

Declining fertility rates and longer life expectancies are producing an ageing global population. This column investigates the challenges that rapidly ageing societies pose to systems of long-term care. To avoid shortages in the workforce, the long-term care industry should endeavour to improve working conditions while also recruiting workers from a larger pool. Investing in disability prevention and rehabilitation are also promising avenues to absorb pressure from growing long-term care needs.

Declining fertility rates, increases in life expectancy, and the progression of large-sized cohorts into older age are driving rapid population ageing globally. In developed and emerging countries, this phenomenon – among myriad health and economic concerns – will raise disability prevalence in the population and dramatically increase the need for long-term care (LTC). Combined with a reduction in informal care (driven by the erosion of traditional family structures) and the widely varying coverage of public social security benefits and private insurance, “most developed countries” will see “a growing dependence on long-term care to provide post-acute care following a hospital stay” (Costa-i-Font et al. 2017). An ageing populace that increases demands on public healthcare systems while simultaneously reducing the number of contributors to said systems exacerbates these challenges. 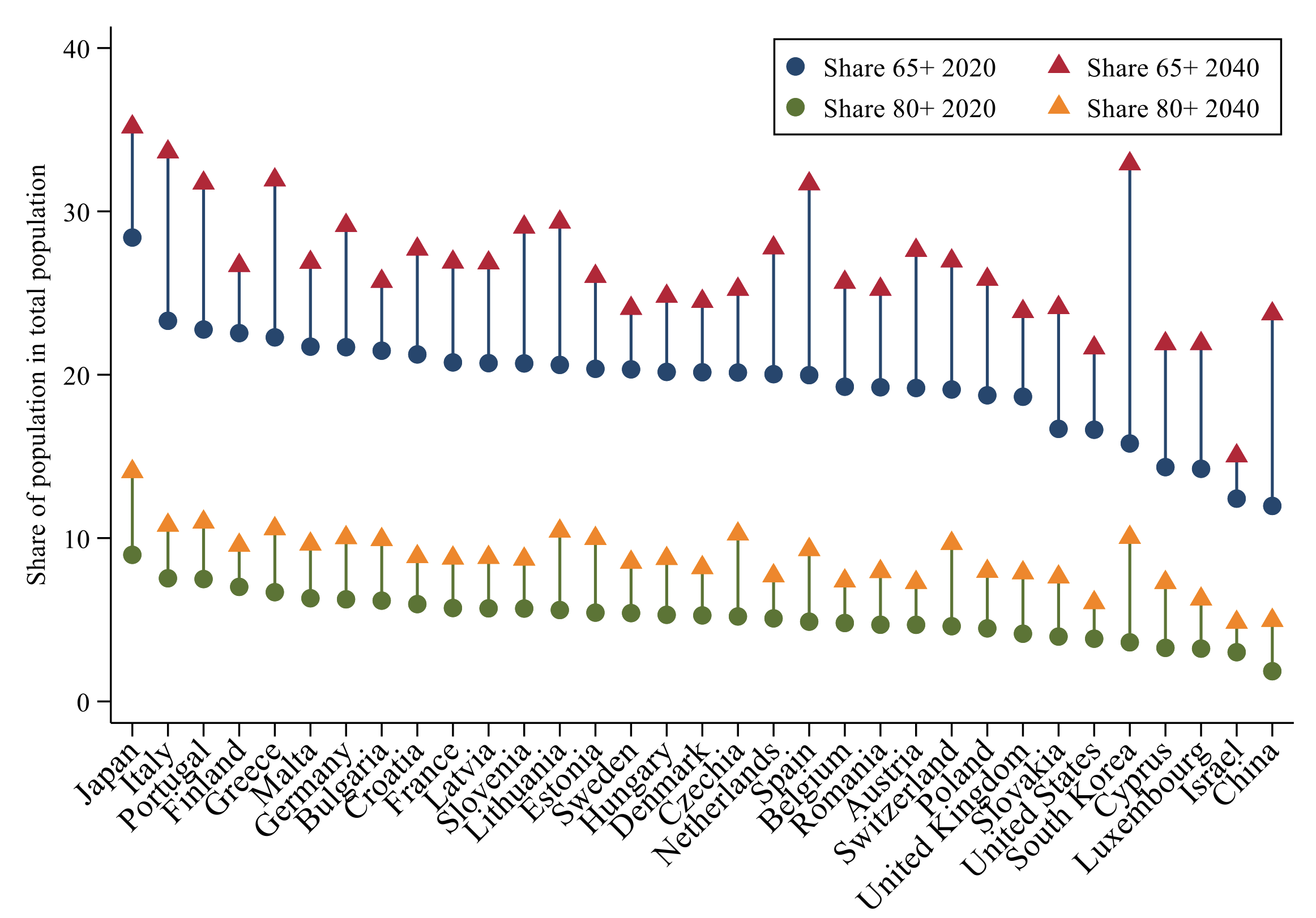 Note: The figure depicts in % the share of persons aged 65+ and 80+ in the total population. All displayed countries are ageing, but the speed of ageing differs considerably across these countries.
Source: authors’ calculations, see Kotschy and Bloom (2022) for details and data sources.

Existing healthcare structures are not designed to meet recipients’ long-term care needs and are ill-equipped for the looming surge in demand. Some countries have implemented social long-term care insurance to facilitate their citizens’ access to adequate care. However, even those systems face considerable challenges in light of population ageing, thus requiring extensive policy reform. Japan, for example, introduced a Long-term Care Insurance Program in 2000; by 2011, long-term care expenditures had doubled from four to eight trillion yen, with government projections forecasting a continued increase to 20 trillion yen by 2025 (Shimizutani 2013). Addressing these challenges by reforming care policy is particularly tricky because measuring informal care has historically been difficult, and because previous reform attempts prove that informal care decisions are sensitive to government subsidies (Costa-i-Font 2018, Barczyk and Kredler 2018). Specifically, when formal care is subsidised but the policy does not anticipate citizens taking advantage of these subsidies, LTC markets will be overwhelmed while informal care converts to formal care. Therefore, reform-minded policymakers must be knowledgeable about the long-term care needs of their constituents, highlighting the importance of health and retirement surveys. To that end, we employed the U.S. Health and Retirement Study and two of its harmonised sister studies – the Survey of Health, Aging and Retirement in Europe, and the English Longitudinal Study of Ageing – to determine the share of ‘frail elderly’, defined as those aged 65+ and those aged 80+ who have at least two limitations in their activities of daily living (ADL) or instrumental activities of daily living (IADL).

Figure 2 Share of elderly with disabilities in selected countries Note: The figure depicts the share in % of persons aged 65+ and 80+ with at least two limitations in ADL or IADL. Values for the United Kingdom refer to England. The figure shows that countries differ considerably with respect to disability burden and that this burden increases significantly with age.
Source: authors’ calculations, see Kotschy and Bloom (2022) for details and data sources.

Examining 30 developed countries, we found that 14.5% of those aged 65+ have two or more limitations in ADL or IADL, which increases to 31.7% for those aged 80+ (Kotschy and Bloom 2022). While these developments are worldwide concerns, the trends display considerable heterogeneity across countries: Southern and Eastern Europe, for example, are ageing very quickly and have a substantial associated disability prevalence among the elderly. Combining projections of demographic composition with the disability share roughly approximates prospective care demand. This projection exercise suggests an increase in care demand of 47%, ranging from 33% to 75% across countries (Kotschy and Bloom 2022). 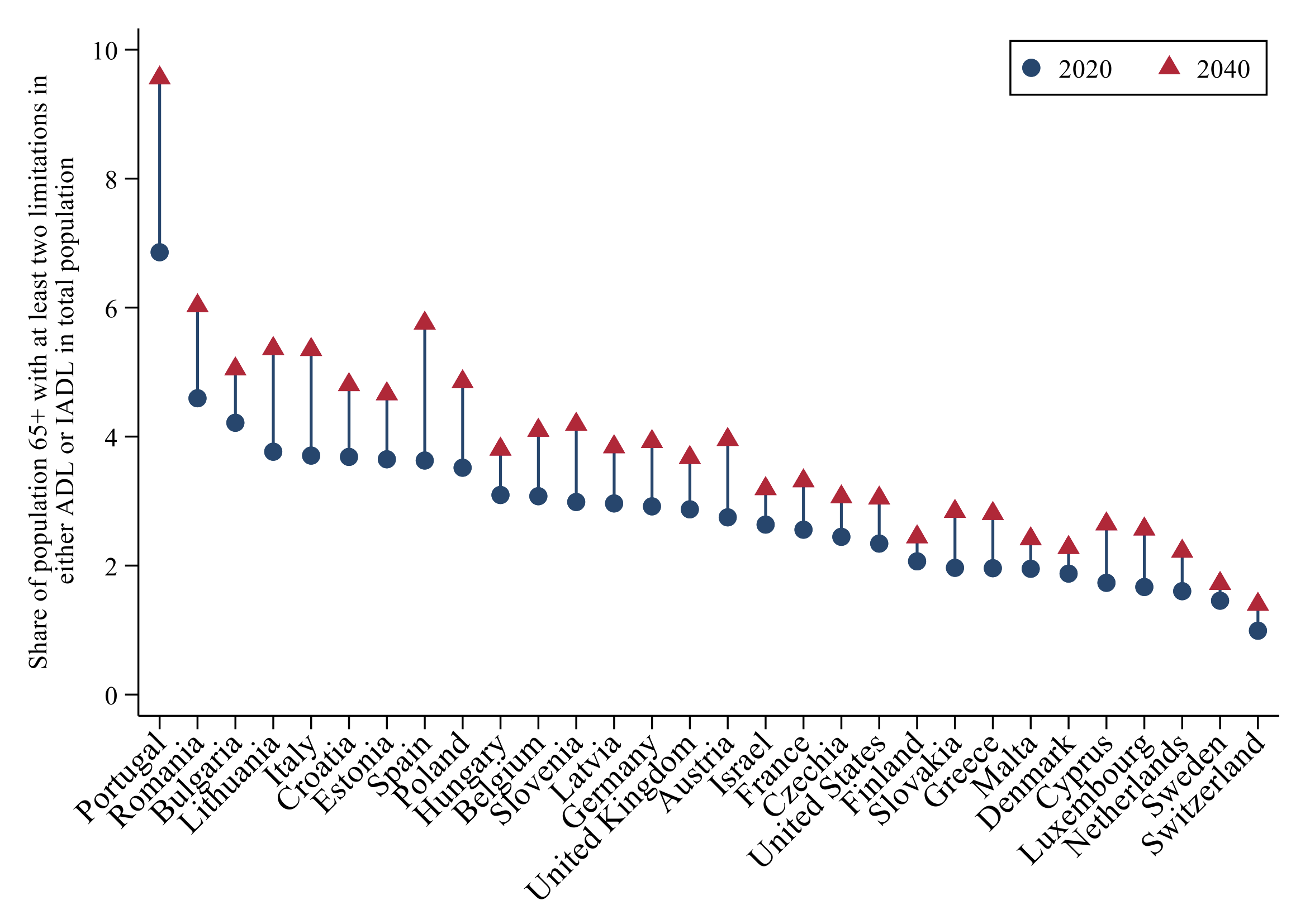 Note: The figure shows the projected increase in care demand, as measured by the share of the population composed of persons aged 65+ with at least two limitations in ADL or IADL in %. The figure reveals considerable differences in this increase, depending on the speed of ageing and the prevalence of disability among the elderly.
Source: authors’ calculations, see Kotschy and Bloom (2022) for details and data sources.

Ageing-Related Challenges for the Supply, Quality, and Costs of Care

Beyond the question of how governments and consumers will pay for increasing long-term care needs is the simple question of whether supply will be sufficient to meet the burgeoning demand. While the number of care workers increased in roughly half of OECD member states between 2011 and 2016, that growth has kept pace with ageing in only a few countries (OECD 2019). To avoid shortages in the long-term care workforce, the industry should endeavour to improve working conditions (offering better pay, enhanced career advancement trajectories, and the use of respite care to provide temporary relief for primary caregivers) while also recruiting workers from a larger pool, including the specific targeting of training for the unemployed, for foreign workers, and for men, who are typically underrepresented in the field. Some countries have made strides in these domains. Germany, for example, has launched policies to improve working conditions and is attracting foreign workers through international collaborations with its Federal Employment Agency (Federal Ministry of Health 2021). Japan has channelled unemployed workers to the long-term care sector, helping the country add 320,000 care workers in a five-year period (OECD 2020). And in Israel, more than half of the long-term care workforce was born elsewhere (Asiskovitch 2013). Unsurprisingly, these countries are among the few where care worker staffing has kept up with the pace of ageing.

The field might suffer growing pains during this workforce expansion if the quality of care suffers for reasons that include the lowering of educational requirements and the scarcity of competition. Potential solutions include licensing professional care workers, as they do in South Korea, or regulating the tasks that care workers can perform, as they do in Israel (OECD 2020). Germany, Israel, Japan, the Netherlands, and South Korea have enhanced training and mentoring programmes to improve long-term care workers’ education (OECD 2020). In addition, Germany has emphasised geriatric training in its nursing curricula. While competition among suppliers is theoretically a boon to curb costs and secure quality, it likely has modest beneficial effects because effective competition is limited in the context of ageing, where demand outpaces supply (see Yang et al. 2021 for a literature review).

If the long-term care workforce does not grow fast enough, informal care must assume most of the care, which can reduce labour supply as friends and family forgo employment to provide care. This development can inadvertently counteract policies that promote female participation in the workplace, as women typically provide most informal care. Policymakers should be encouraged to pursue potential relief measures designed to reduce the economic burden for informal caregivers, such as supporting direct cash payments from recipients and providing social security contributions.

Population ageing also imperils access to adequate care, as it increases the demand for cognitive, dementia, and psychological services. Current benefit assessments and eligibility requirements do not necessarily reflect the heterogeneity in disability and likely overemphasise physical functioning. Some long-term care systems have implemented different care levels based on physical, mental, and cognitive functioning, with a focus on differentiation with respect to care needs. In Japan, beneficiaries are sorted into one of five care levels; in the Netherlands, they receive benefits based on care needs that are organised by functional domains (Joshua 2017). Because equity is an important component of access, long-term care systems should include means-testing or social support for the least affluent to provide equitable access to care. One feature the aforementioned countries share is compulsory long-term care insurance, financed by payroll contributions (Germany and Israel) or by a combination of payroll contributions and taxes (Japan, the Netherlands, and South Korea). As access to care is codified as a legal right motivated by the concept of human dignity (e.g. Nordenfelt 2004), governments might face legal and ethical challenges if they fail to provide universal access to care.

Finally, reform attempts inevitably encounter a trade-off between care quality and costs, often rooted in policies designed to determine eligibility criteria: deciding whether to grant benefits to more beneficiaries or to grant more benefits per person. More efficient service provision is essential to containing costs of the growing use of LTC services. This approach can be addressed through market power, as in Israel, or by decentralising service delivery and putting provision in the hands of local municipalities, as in the Netherlands (Hasson and Dagan Buzaglo 2019, Maarse and Jeurissen 2016). Integrating general healthcare and LTC services, such as aligning admission criteria for LTC facilities and hospitals, could address service gaps and overlaps.

Population ageing will increase the demand for long-term care. Investing in disability prevention and rehabilitation are promising avenues to promote wellbeing and to absorb pressure from growing long-term care needs. Such initiatives are not quick fixes, but implementing them could create the necessary momentum to address health challenges. The more successful the prevention efforts, the lower the cost and the demand for LTC services, with increased individual wellbeing conferring benefits that could reverberate throughout the health and economic landscapes (Bloom et al. 2018). While most of the countries investigated for this study support rehabilitation programmes, robust prevention initiatives are rare; Japan is an exception, having implemented a preventive strategy at the community level while emphasising community activities and meeting places that can foster the personal autonomy of an ageing populace (Yamada and Arai 2020). Germany and the Netherlands, meanwhile, aim to promote telecare and the redesign of living environments to encourage healthy, independent ageing (European Commission 2019).

As the Figure 4 shows, prevention efforts to reduce the burden of disability still constitute a small portion of health expenditures. However, prevention efforts – along with boosting rehabilitation spending, bolstering LTC worker recruitment, enhancing LTC efficiency, and ensuring equity of access – could mitigate the effects of an ageing population and provide fiscal relief for stressed LTC systems. A stronger emphasis on illness prevention in reform agendas seems highly desirable. 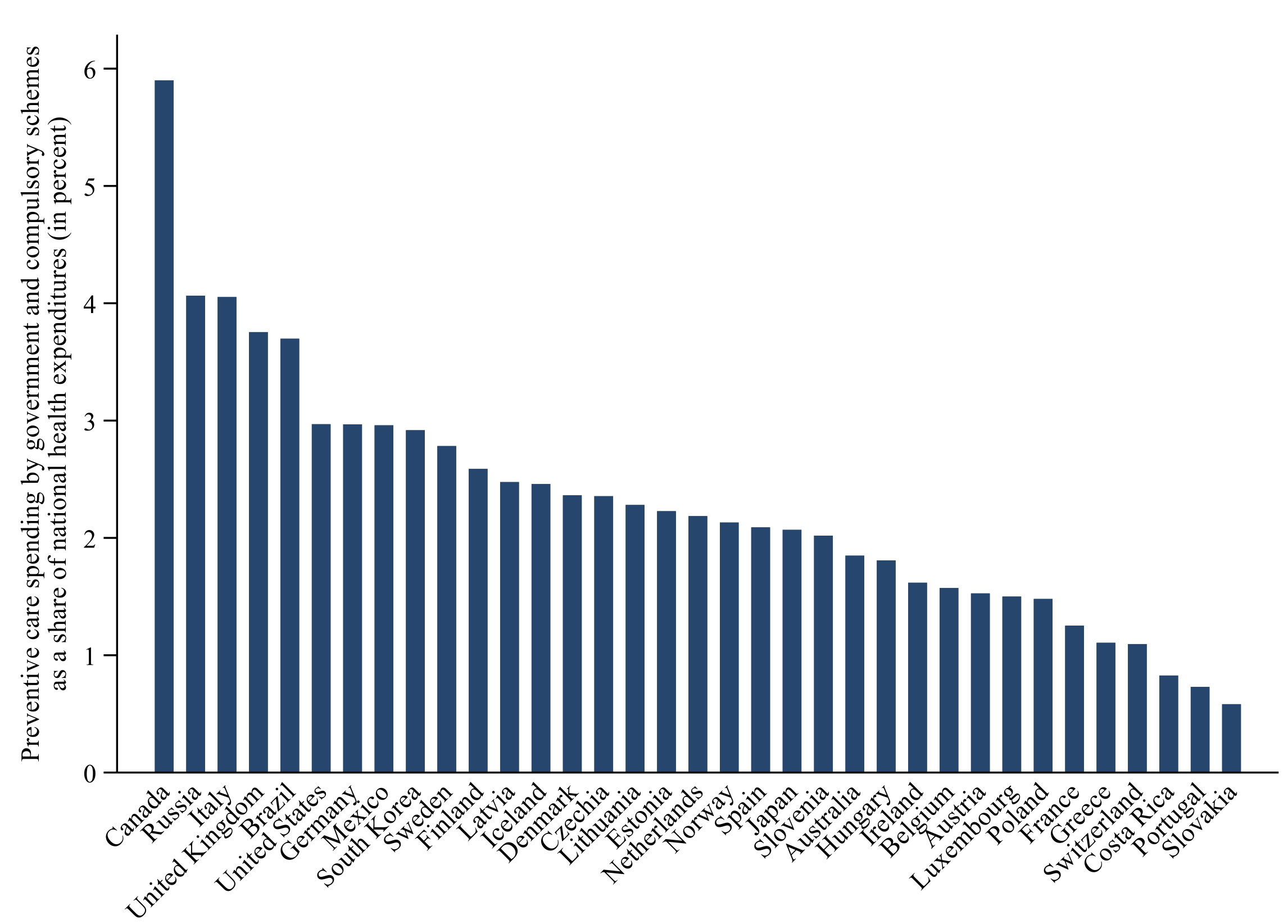 Note: The figure shows that preventive care spending amounts to only a small portion of national health expenditures, ranging between 1% and 3% in most countries.
Data source: OECD.Stat (OECD 2022), extracted on 27 April.