Yves here. Tom Neuberger is correct to point out that the current level of Team Us versus Team Them is “manufactured” but he is oddly loath to use the word propaganda. The go-to book on this topic, which is regularly cited by those who have read it as better than Walter Lippmann’s Public Opinion, is Alex Carey’s Taking the Risk Out of Democracy. Carey explains how Americans are particularly susceptible to propaganda due to our undue respect for wealth and commercial success compared to other civic and personal virtues. The earliest and for decades most effective propagandist in the US was the National Association of Manufacturers. Among other things, NAM identified free enterprise with America’s values, and presented corporate efficiency and profits as consistent with the general good, as opposed to benefiting the rich.

Another factor that has greatly contributed to polarization is the long-term campaign, turbocharged in the late 1960s-early 1970s, to move America’s value to the right. A centerpiece was to attack government as inefficient and untrustworthy, and individuals as the only sensible locus of power and decision-making. Of course, atomized individuals, excerpt for the very wealthy ones, are powerless.

Media fragmentation, the rise of what in its early days was called “narrowcasting” and big tech and media firms greatly improving their ability to improve “engagement,” stir emotions, and hone messaging, have also helped fracture society and politics. 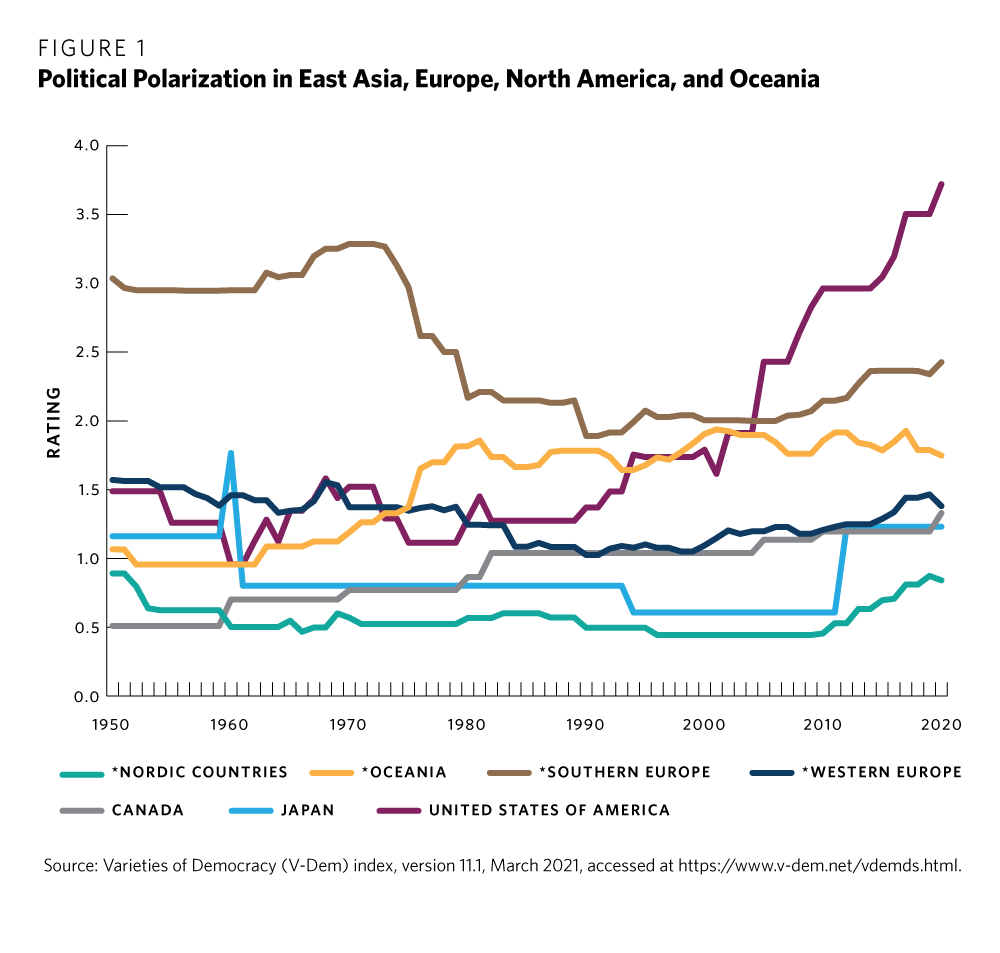 No established democracy in recent history has been as deeply polarized as the U.S.
—Yascha Mounk

It’s almost a commonplace to say that Americans are politically polarized. “At each other’s throats” would be more accurate. A recent study from the Carnegie Endowment has — no surprise — found as much. (See “What Happens When Democracies Become Perniciously Polarized?”) From their report:

The rise of an “us versus them” mindset and political identity in American sociopolitical life is evident in everything from the rise of highly partisan media to the decline in Americans’ willingness to marry someone from the opposing political party. Even more concerningly, these dynamics are contributing directly to a steep rise in political violence.

This observation is both very troubling and, as I said, a commonplace. We live indeed at a time when “everything new is old again,” a time that’s tucked between the start of a world-historical collapse and stories about it that sound too old to be new.

Writers in the serious world are taking note, of course, even if others aren’t. Witness this piece by Yascha Mounk in The Atlantic, which leads him to conclude, “No established democracy in recent history has been as deeply polarized as the U.S.”

The Cause of Our Current State

The cause of our fall to this state, however, is harder to discern, at least according to the mainstreamers at Carnegie or The Atlantic. Mounk, for example, handles the causes this way: “But if many citizens come to believe that letting the other side rule poses a threat to their well-being, even their lives, they may no longer be willing to accept the outcome of an election they lose.”

Apparently, citizens just “come to believe” that Republicans or Democrats are existential threats to life, or democracy, or both. Many politicians, indeed, are threats to both life and democracy, but our fellow citizens too? Are they also to be hated and feared?

Apparently so, according to this far-right pastor:

We’ve also been exposed to similar invectives on the left, from people who have said both publicly and privately that Trump voters are Putin lovers, or that anti-maskers and -vaxxers deserve what they get.

As an example of the former, consider this from a recent Newsweek: “While a significant majority of Americans agree that Russia’s invasion of Ukraine was not justified, Republicans are more likely to hold an unfavorable view of President Joe Biden than they are of Russian President Vladimir Putin, according to a new poll.”

I’m not arguing the yes or no of that statement; I’m pointing out that Newsweek, a liberal establishment publication, decided to print it. The implication is clear — Republican voters love Putin.

As an example of the latter, the anti-vaxxer animus, Howard Stern has been as clear as anyone, and echoes the sentiments of many who say the same thing less publicly:

Howard Stern said on the Jan. 19 [2022] episode of his Sirius XM radio show “The Howard Stern Show” that hospitals across the U.S. should not admit patients who are unvaccinated against COVID (via Uproxx). Stern has often used his radio show to speak out against anti-vaxxers, but he was more blunt than ever when he told listeners this week, “If it was up to me, anyone unvaccinated would not be admitted to a hospital. At this point, they have been given plenty of opportunity to get the vaccine.”

“… It’s time for you to get it [the vaccine]. Now, if you don’t get it, in my America, all hospitals would be closed to you. You’re going to go home and die. That is what you should get. Absolutely.”

Howard Stern is not paid to say this (though Newsweek may be in a much more subtle way), any more than the preacher linked to above is paid to speak his anti-Democrat wisdom with such force.

So where does these invectives come from? Are they just “in the air”?

Consider the old-time Westerns, the ones with Tex Ritter, Hopalong Cassidy and Johnny Mack Brown.

In many of these shows there’s a scene where a mob of angry townspeople gather outside the jail calling for the hanging death of some usually innocent prisoner caged inside. The mob is always large and exceptionally mean. Their anger is palpable and universal.

Then the sheriff, the movie’s hero or someone allied with him, would go outside to deal with the threat. Would he accuse them all of wickedness and threaten to take their own lives if they attack? Sometimes.

But mostly he picks the mob apart. “Sara,” he’d say to one woman. “You came to this valley poor, and now you and Jim” — her husband, standing beside her — “are good and decent folk. Do you really want to go outside the law, the law that keeps this valley safe for you and your kids?”

Sara (and Jim) would look down, ashamed, and back away from the others. One by one, the sheriff would isolate members of the mob, peel its parts away, until only a few, the mob’s true leaders and its angry core, remained. Not enough people to actually storm the jail, not with the deputy inside, the one with the shotgun. The mob was beaten and the threat is gone.

Most mobs are like this — a few instigators, people who will never let go of the cause, surrounded by many who are far less committed than they, but momentarily caught up, swollen by the atmospheric anger of the rest. Remove that atmosphere and most people will return to “normal” — exactly the right word, since “normalize to groups” is what human beings do best. It’s why, in fact, we survived as long as we have. Rugged individuals die alone. Groups, united by a common culture and mind, breed and live on, however strange that mind may appear to a neighboring tribe caught up in its own group thought.

The Evil That Men Do

This leads to two ideas.

The first is that we all — the lefties and the right — should treat the opposite mob as teachable, not intractable; as fixable, not fixed. Farmer Sara in the example above was screaming for violent death, a hanging death, until she wasn’t, until she normalized to a different group — the town’s mind, not the mob’s. Or, to say it differently, she came to her senses.

Each of us lives on a line that contains our worst and best selves. And most of us move along it, from better to bad and back, embarrassingly often. Almost no one is cemented permanently to her worst presentation. For the left, this means that treating the 47% of the country that voted for Trump as racist lost-cause fools is not only wrong, it’s also itself a self-fulfilling lost-cause prophecy.

But the second idea that leads from our mob analogy is even more important, since it answers the question, “How did we get this way?” The fact is, we’re as divided as we are because the division is funded and manufactured.

Liberal voters are told from dawn to dusk by their well-paid, in-house media that the other side is, in a word, evil, though the accusation, as befits that crowd, is much more cleverly put. (See the Newsweek article above for a small example; watch MSNBC at any hour of the day for a larger one.)

Similar examples from the right — or worse ones yet — are endlessly available:

In fact, the American Right has financed a decades-long project — has been doing so, in fact, for almost 50 years — to make sure that Farmer Sara and her husband not only stay with the mob, but are emotionally rewarded daily for doing so.

Put simply, our mobs are manufactured, especially the ones on the Right (though liberals are catching up), and the output of that manufacturing is, as noted above, the reason the country will fail.

As things stands today, the country is becoming ungovernable, except in the “rich rule us all” sense that oligarchies always share. It’s certainly ungovernable by the people, and has been for a while. Our participation in these manufactured mobs ensures that the blame for this falls, not on the manufacturers where it truly belongs, but on the mobs themselves, gathered precisely to scream distracted in each other’s face.

As long as those mobs exist, and as long the rich that swell the ranks of each are allowed to inflame us all against us all, for just that long will democracy fail in America, and we will be the cause. To escape the rich, we must escape their mobs, and encourage others to escape them with us.