Yves here. The $1 trillion estimate for ending EU dependence on Russian energy, which admittedly is to be spent over a period of years, nevertheless indicates that if the EU goes full steam ahead, it’s not going to have a lot left over for things like maintaining social safety nets, let alone also militarizing. Of course they may be expecting the US to pay for that. But even the New York Times editorial board has said there are limits to how much Ukraine can expect from us.

And that’s before getting to the question of operational capacity.   Who exactly is driving this bus? And how many EU member states have a  good track record with large scale infrastructure project. I understand France has a good contracting regime. Is its performance typical?

The European Union’s REPowerEU seeks to reduce the European Union’s dependency on Russian fossil fuels and accelerate the transition away from carbon-intensive energy sources. The European Commission’s cost estimate, however, may fall short as Rystad Energy analysis suggests the plan will require at least €1 trillion in investment to meet the core objective of increasing renewable generation from 40% to 45% of total energy supply by 2030. Additional investment will be required to meet targets, including grid and battery storage developments to ensure a stable supply of energy as the whole European power system will need to be restructured.

While the plan defines different angles to tackle the current crisis, the most detailed section outlines the roadmap for solar PV. The strategy aims to bring 320 gigawatts (GW) of solar PV online by 2025 and almost 600 GW by 2030, aiming to displace 9 billion cubic meters (Bcm) of gas demand. Europe currently has around 189 GW of installed solar PV capacity, meaning 131 GW need to be installed by the middle of the decade, or an equivalent of 44 GW per year. This would mean almost doubling the installation rate, which was 24 GW in 2021 and is expected to be 29 GW this year. To reach the targeted 600 GW by 2030, around 56 GW of new solar PV capacity would need to be installed during the following five years.

Assuming an average cost for solar PV of €1.1 million per megawatt (MW) of installed capacity, installing 411 GW between now and 2030 would represent an investment of €452 billion. Reaching 45% renewable energy supply by 2030 additionally requires significant investments in wind capacity – for which the plan does not have a lot of detail. Rystad Energy’s estimates suggest another 450-490 GW of wind capacity would need to be installed by 2030 to reach the target of 45% renewable energy supply, requiring an additional €820 billion in investments.

Such a transition will require huge investments but thus far the European Commission has been unclear about the total amounts allocated to achieve its goals. Recent announcements and communications mention that €225 billion is already available in loans and that an additional investment of €300 billion could be needed by 2030. Regardless of the total amount being assigned to new renewable energy developments, the figures seem to fall considerably below the required additional investment needed in power transmission, storage, gas infrastructure, and hydrogen production. Furthermore, such a large demand for new capacity will put additional pressure on the supply chain for solar panel and wind turbine manufacturing and could lead to a further increase in costs for these technologies.

“The ambition of the REPowerEU plan is huge. Power companies and energy markets will be looking for details on investments and infrastructure. While the targets are achievable, it will require wartime-like planning, levels of investment, construction, and production to meet goals by 2030,” says Carlos Torres Diaz, head of power research at Rystad Energy. 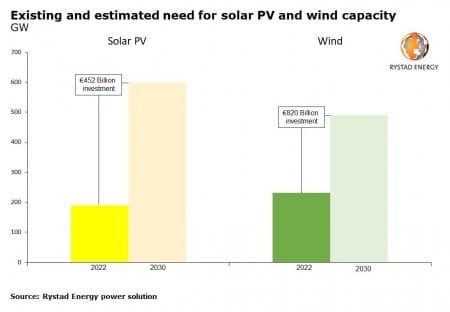 REPowerEU acknowledged the need to address the bottlenecks in the permitting process. Currently, a wind energy permit could take up to nine years. To address this issue, the Commission put forward a new legislative proposal on renewables permitting based on three things:

Speeding up the permitting process is crucial for the European Union to be able to meet its ambitious targets.