As readers may have worked out, scientist GM, whose observations via e-mail and in comments we have often hoisted into posts, is on the pessimistic end of the spectrum of Covid prognosticators and yet (or maybe due to that) has been early and very accurate. For instance, he was one of the first to notice the data from Israel in July 2021 showing a marked falloff in Pfizer vaccine protection 5-6 months after the jab. GM was also immediately on top of Omicron, that its many mutations on the spike would mean close to total evasion of prior protection (whether via vaccination or prior infection) and therefore potentially rapid spread.

Thus it isn’t at all good when developments surprise GM on the downside. As we’ll soon discuss, the speed of emergence of Omicron variants has surprised him in a bad way. Mind you, many of them are different enough that they should have gotten their own Greek letter, but that degree of truth in advertising would conflict with the party line that Covid is over.

But GM was also a bit disconcerted by the results from large-scale study using VA data, now out as a preprint, on Covid reinfections (we have additional links on it in Links). It does confirm what GM had warned about from the very outset, that getting Covid has a health cost, and those costs add up and maybe even multiply the more times you contract Covid. However, as he remarked:

I actually have doubts about the precise numbers — they are much much worse than I expected at this stage, and some things in the way this was done look kind of sloppy and should be hopefully sorted out in review.

But one important aspect of it is that this looks at different metrics from previous studies — previously reinfections were scored on hospitalization and on death being written as COVID on the death certificate. And those showed some protection on first reinfection (but already worsening on the second).

Here they look at the various sequaelae and at all-cause mortality for a larger period of time post infection.

And if true this is what reveals the real damage even at the first reinfection.

Also, reminder that the bulk of these reinfections are Omicron, i.e. the least dangerous version so far. Presumably it would have been much worse without all those S2 mutations.

When Pi [the next major variant] hits one can expect a total disaster — billions of people are right now accumulating preexisting conditions that are setting the stage for the grim reaper to take them when the next big antigenic shift happens.

Before going further, I want to emphasize this sequence is a singlet. No further cases have been detected yet, & there may never be any. This could be a bolt from the blue, disappearing without a trace, as we’ve seen with other crazy sequences. 2/12

This one was sampled in April but only posted three days ago, so if it was going to be what becomes Pi, it would have perhaps taken over by now (though of course Delta was first detected many months before it exploded so one never knows).

But the fact that these kinds of variants are popping up again and again means that Pi is coming. Probably sooner than later…

IM Doc asked GM if these Covid variants could be the result of animal reservoirs. As you can see, GM finds that none of the likely causes of mutation are sufficient to explain the rate of variant emergence. Needless to say, that is not a good picture. From GM:

Nobody knows for sure.

The Omicron origin becomes more and more mysterious with every new iteration. None of the possibilities explains it well:

1. A single chronic infection that has produced all of BA.1-5 and then transmitted them forward over a period of 4-5 months between October and January. I guess it’s not impossible, but how likely is that?

2. It is not a single individual, but a community of people, most of whom are immunocompromised, where the virus has been bouncing around repeatedly, accumulating mutations, and then leaking out of that community. This is actually not that implausible. Think of how we used to have leper colonies not that far along even in the West. Perhaps in South Africa they have some places where they send people with HIV to live out their days, and those places don’t have all that much contact with the outside world, which explains why the virus leaks only from time to time. Doesn’t necessarily have to be a place specifically for people with HIV, what would also work is some rural locality that is isolated and out of the way, where few people go regularly, and where many people have HIV. Gauteng actually does fit the bill — remember those famous photoalbums of rural poverty from the early 90s, with the very famous photo of the “inbred twins”: 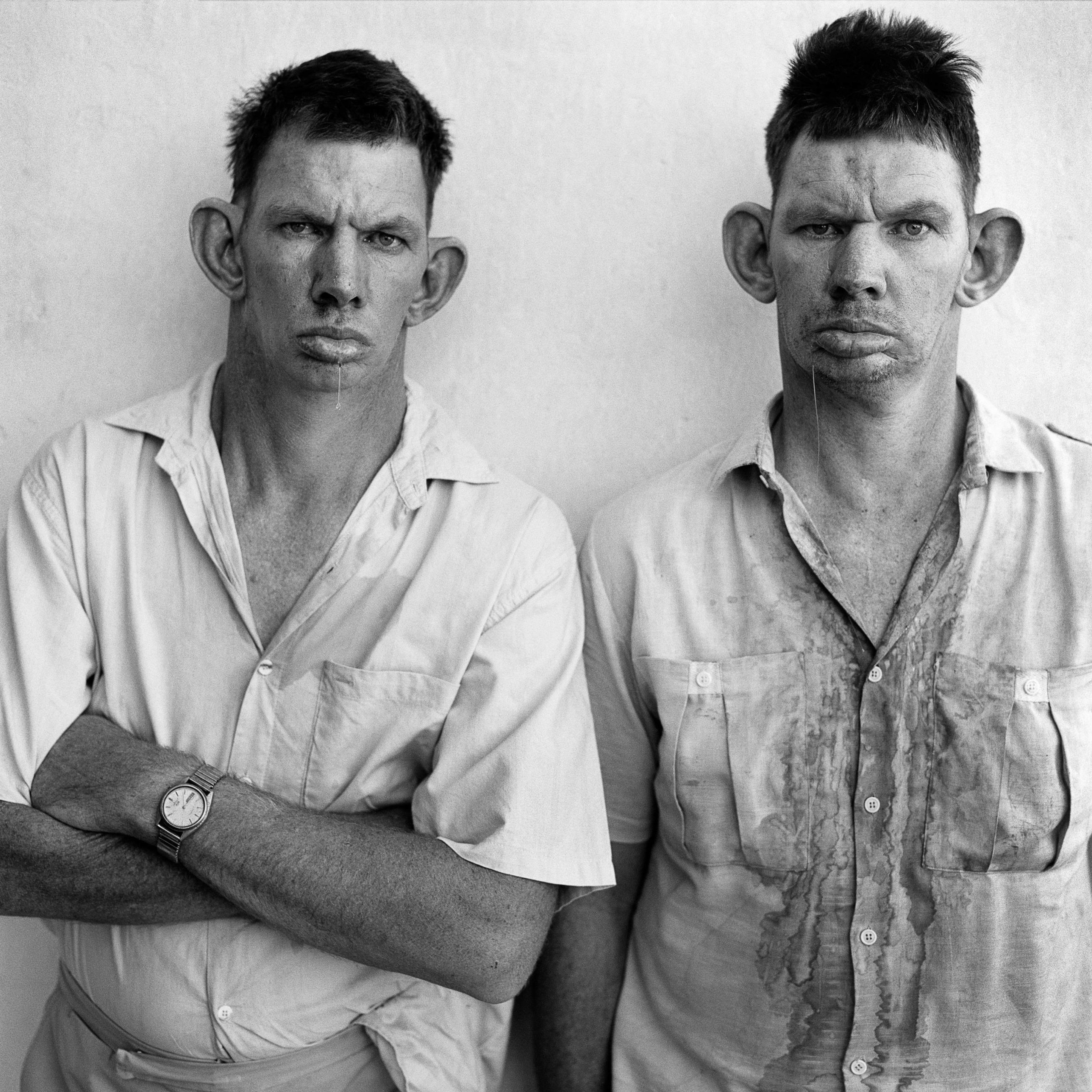 That was in what was then Western Transvaal, which later became the North West and Gauteng provinces.

But such a scenario imposes the strict requirements that the rural locality in question has a lot of immunocompromised people and is isolated. Which is a rather unique situation.

3. Some rodent species in South Africa got the virus and it has been circulating there, making the reverse-reverse zoonotic jump from time to time. This is again a highly unlikely situation though, because BA.1, 2 and 3 appeared all at the same time, and then BA.4/5 also appeared at the same time. And if there is widespread transmission in rodents (or some other animal) you would not expect to see multiple related lineages making the jump at the same time. It’s just not very likely.

Animals are a problem for another reason — we are talking huge amount of mutations here, and we have only seen that in immunocompromised humans. So then the question arises regarding how is it that the virus accumulated so many mutations in whatever animal population is the reservoir? Because I am betting a lot of money that the percentage of immunocompromised individuals in wild animal populations is much much much lower than it is in the human population. In the human population they survive because modern civilization can shield and support them. Out in the wild they are dead very quickly. Also, rodent populations aren’t as huge in size as people think, and rodents are physically much smaller than humans, so at best there has been ~1/100th of the viral replication that has happened inside humans in those populations.

The NYC wastewater studies (the one with the many more and super highly divergent sequences that they found in the year since the original paper) do not bring any clarity either. That problem about how so many mutations appeared so quickly applies there too.

But we have added complications.

First, the concentration of these extremely divergent viruses in wastewater is very high. Much higher than could be reasonably expected that a single individual could shed. Yet in the same time if those lineages were being transmitted widely, that would be picked up by patient surveillance sequencing, as crappy and patchy as the coverage is. But they are only found in wastewater.

This would suggest rats.

But, the second problem is that if it was circulating in the rats, one would expect those viruses to be widely circulating within the city, and to be sweeping the way they do in humans. We don’t see that though — they see the super divergent sequences usually only in individual watersheds, and they see a lot of diversity. No sweeps (other than whatever circulates in humans at that time, which always dominates the signal).

Third, you can measure how much rat RNA there is in those samples, and in some of them there is none, even though there is lots of divergent SARS-CoV-2.

So it remains a mystery.

P.S. Given how important this is, one would think that we would be doing the following:

1. Mass population-wide testing of the whole population in South Africa during the periods in between waves, then sequencing of all positives, in order to identify the chronic infections and figure out what is brewing. It would cost quite a bit of money, but it is a drop in the bucket compared to the damage that has been done and will be done.

2. Someone would actually go down in the sewers in NYC (and all other major cities around the world) and sample the rats, mice and other fauna, in order to conclusively identify any possible reservoirs. Combined once again with mass testing of the human population.

Again, it’s a lot of money at first glance but it’s a trivial amount in the grand scheme of things, and especially given how $50-60 billion just got sent to Ukraine without any hesitation for the Russian artillery and missiles to target practice on.

Naturally nobody is doing any of that.

Needless to say, the failure to investigate is very likely to make bad outcomes worse than they need to be. And it make the regular hectoring of China for keeping infections down look even more deranged as the US seems determined to remain a Covid disease reservoir.