Yves here. I hate having to criticize this piece by Tom Neuburger that makes some valid points about Republican messaging. But the way the headline relates to the text drives me nuts.

Neuburger starts his post with an long quote from a New York Times article about how jurisdictions that depend on income from fossil fuel activities are fighting divestiture campaigns. For instance, West Virginia, whose fortunes are still tied in a big way to the coal industry, has its state Treasurer firing BlackRock as an asset manager because BlackRock has decided to be in the forefront of ESG (environment, social, governance) investing. That means at least giving lip service to dumping dirty energy plays.

The key section of the extract:

Across the country, Republican lawmakers and their allies have launched a campaign to try to rein in what they see as activist companies trying to reduce the greenhouse gases that are dangerously heating the planet.

“We’re an energy state, and energy accounts for hundreds of millions of dollars of tax revenue for us,” said Riley Moore, the West Virginia state treasurer. “All of our jobs come from coal and gas. I mean, this is who we are. This is part of our way of life here in the state. And they’re telling us that these industries are bad.”

Tell me, where is the lie?

Yes, the Republicans are the party of the coal, oil, and gas industries. However, the fact that the time for making deep cuts in greenhouse gas emissions was years ago does not make the point these aggrieved officials are making any less true: there are communities, even states, whose incomes depend heavily on these activities. And no one on Team Dem has proposed what to do about these lost livelihoods, save maybe “Learn to code.”

In fact, one can make the case that the Democrat climate change lies are as serious as the Republicans’. The Republicans amplify the fact that dealing with climate change will mean sacrifice….and they try to depict it as part of a scheme to increase social control or some other nefarious ends. But the Democrats act as if all we need to do is convert to green energy sources, and we can carry on with our energy profligacy. As we’ve said repeatedly, that’s wildly false. If we are to have any hope of preventing the most extreme climate change outcomes, we must start radical energy conservation now. But no official will say that because that means….gah…sacrifice!

The fact that Democrats won’t say the US needs to cut back on international supply chains (ocean shipping is really nasty), our bloated, energy-hogging military, and air travel, particularly private jets (for starters), says that all they care about is the pork they can deliver to various green energy interests. 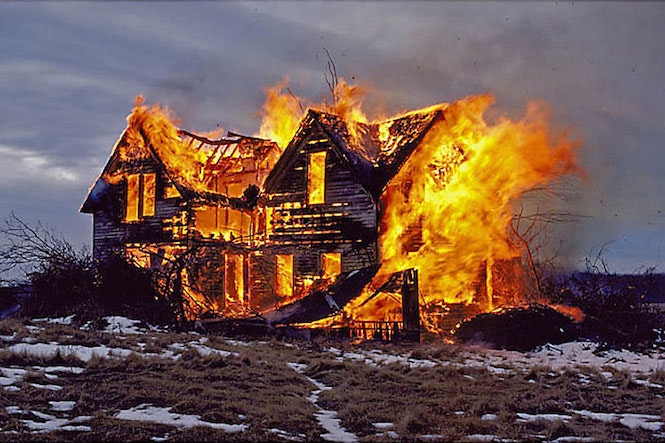 Burning the whole house down (source)

“We have an existential threat here. We have to fight back.”
—Riley Moore, Republican West Virginia state treasurer

The New York Times recently published a climate-related piece that’s notable for several reasons. The first reason is the content:

How an Organized Republican Effort Punishes Companies for Climate Action

[Republican] Legislators and their allies are running an aggressive campaign that uses public money and the law to pressure businesses they say are pushing “woke” causes.

In West Virginia, the state treasurer has pulled money from BlackRock, the world’s largest asset manager, because the Wall Street firm has flagged climate change as an economic risk.

In Texas, a new law bars the state’s retirement and investment funds from doing business with companies that the state comptroller says are boycotting fossil fuels. Conservative lawmakers in 15 other states are promoting similar legislation.

And officials in Utah and Idaho have assailed a major ratings agency for considering environmental risks and other factors, in addition to the balance sheet, when assessing states’ creditworthiness.

Across the country, Republican lawmakers and their allies have launched a campaign to try to rein in what they see as activist companies trying to reduce the greenhouse gases that are dangerously heating the planet.

“We’re an energy state, and energy accounts for hundreds of millions of dollars of tax revenue for us,” said Riley Moore, the West Virginia state treasurer. “All of our jobs come from coal and gas. I mean, this is who we are. This is part of our way of life here in the state. And they’re telling us that these industries are bad.”

“We have an existential threat here,” Mr. Moore said. “We have to fight back.”

The article goes on to detail the efforts that many corporations, despite some bending to Republican pressure, are nonetheless making to improve our climate future. Those efforts are mainly verbal, but still, verbal is better than absolute silence. Some would say it’s a start. For example, Larry Fink of BlackRock recently wrote this to his investors:

“Every company and every industry will be transformed by the transition to a net-zero world,” Mr. Fink wrote. “The question is, will you lead, or will you be led?”

So according to the article, it’s up in the air if the Republican plan will work to move corporate America back to the oil-and-gas affirming camp. But they’re trying, and that’s worth noticing.

The War Against the Woke
The next thing that’s interesting in the article is the grounds on which Republicans are making their case — liberal “wokeness.”

There are arguments on both the left and right about whether the “wokeness” of mainstream liberals is good or just crowd-following, or worse, careerism. Consider this early criticism of Robin DiAngelo’s best-selling book, White Fragility by writer Matt Taibbi:

Taibbi sees good in the book, but also a lot of wrongheadedness. (For this criticism, by the way, and for other sins Taibbi’s been banned from mainstream liberal media. He’s definitely not flying with the flock on subjects like these.)

There is a lot of right in being “woke,” along with some that’s wrong. “Wokeness” implies a state of thoughtfulness, of waking up to truths one’s been asleep to. But as a catchphrase, a banner one must mindlessly follow, the concept’s been degraded beyond recognition, even by many of its adherents.

Which is where Republicans come in. They always manage to take whatever’s ambiguous in left-wing/liberal thinking and re-frame at its unambiguously at its worst. Critical race theory is an excellent example; they’ve distorted its meaning beyond all recognition.

In the climate case, they’ve taken the worst elements of “wokeness” and crafted a strategy to paint all effort to do good as cynical liberal posturing. Because there are cases of cynical liberal posturing, which mainstream liberals seem determined to defend, the strategy works, as it always does when libs dig in their thoughtlessly defensive heels. (I hope you can appreciate how thoughtless defense of thoughtfulness can lead to trouble.)

Here’s the pro-fossil fuel version the woke alarm, as quoted in the Timesarticle: “These big banks are virtue signaling because they are woke,” wrote Gary Howell, a WV state rep who wants to blacklist companies that have divested from fossil fuel. And that’s the whole campaign. Defend coal, oil and gas because “woke America” wants to take it away.

It’s just another flavor of the lie that was told to your fathers and mothers way back in the previous century, a lie that today is 50 years old and counting. “Those anti-American hippies want to take away your right to eat what you want,” a campaign that defends the corporate crap-food industry, newly under assault from consumers who prefer the counter-culture’s health food alternative. “They’re taking away your Frosted Flakes and giving you granola.”

Some version of that story’s been told for most people’s lives. To boil it down further, “Liberals want to take away your stuff.” As an attack, it seems to work each time. Partly because it’s true for several good reasons. Your right to own a bazooka, poison the air, sell poison as food, eat poison as food — these aren’t really a right a government should grant. And partly because it’s true for bad reasons as well — liberal defense of attacks on free speech by giant tech monopolies come to quickly to mind.

The solution to this one? You can’t stop people from lying who lie for a living. Even Republican operatives have to eat.

But you can stop handing them truths to hook their lies onto. That may not solve the whole problem, but it solves the part of the problem that Democrats control.

Let’s face it. The answer to the question, “What’s the cost of not addressing climate change?” is “All the wealth in the world.” When humans are hunter-gatherers again, world GDP falls to a very small number. Or to zero if we’re extinct.

And the answer to the question, “What would happen to the fossil fuel industry if climate change were adequately addressed?” is “The business wouldn’t exist.”

Every corporate asset owned by Exxon, if related to its climate-killing work, would lose all value if the rich who run the world were serious about addressing the problem. And they know it.

“We have an existential threat here,” said West Virginia treasurer Riley Moore. He’s right. The industry, which should be dead today, is threatened with a well deserved extinction. And yet it lives. You’ll know your climate-saving efforts are effective when Exxon, BP and Total start losing asset value — and not before.

Has that happened yet? Here’s ExxonMobil’s stock valuation since 2006, well before Barack Obama took power: 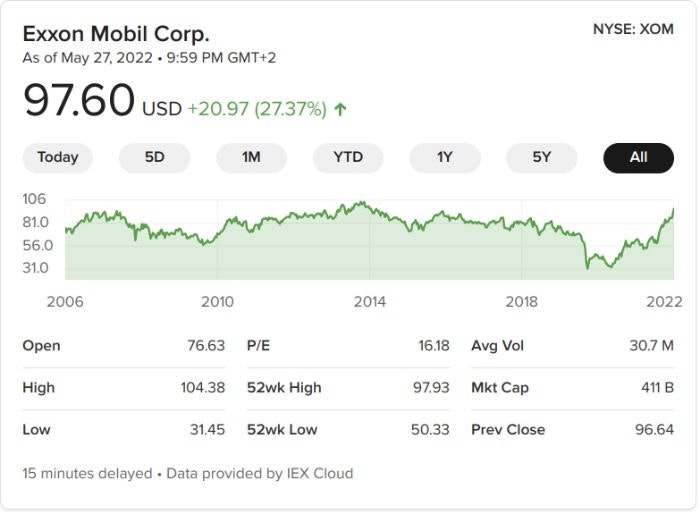 See any kind of change worth crowing about?

Is It Propaganda If Liberals Do It Too?

The final point I want to make in this multi-part exploration is about the New York Times itself and President Joe Biden.

The article is written as if Republicans were the only ones responsible for killing the climate. And to drive home that point, the editors drop in a little promo box of related pieces, prominently placed near the start of the one we’re examining. Note the unrelenting praise for President Biden and his climate efforts. 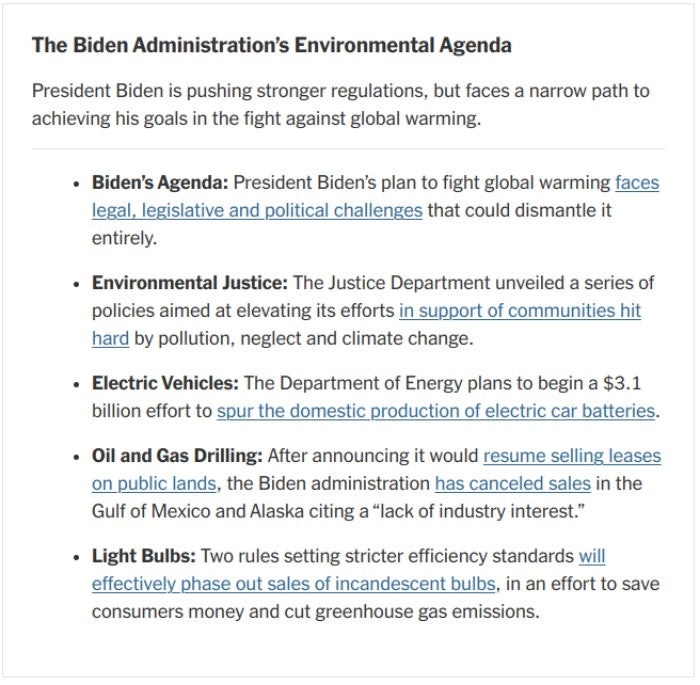 All of which makes the article insincere, since if the Times cared about the climate, it would also feature Biden’s own climate crimes as well. Crimes such as the ones detailed here:

The second link contains a list of climate misdeeds that goes back to the start of the Biden administration. Instead, not a peep from the Times author (or his editor) on the actual climate problem, the one that says “our guy’s” in power and bad things are happening.

It’s a complex world when articles like these can do so many things at once, some deadly accurate and important, and others just, gotta say it, propagandistic. I think if the liberal-left were a bit more principled, if they misled less often, the dangerous creatures toiling on the right would have less meat to feed the steaming mob that they themselves mislead.

But I think I said that already, higher up in this piece, and I don’t think saying it again will change a thing.