Yves here. This story confirms the old cliche that real estate is always local. In quite a few major retros, suddenly there’s almost a surfeit of homes for sale, while in others conditions are even tighter than last year.

“Inventory” in housing means homes listed for sale. Then there’s the shadow inventory – vacant homes that owners want to sell eventually because they have already moved into a new place but want to ride up the surge in home prices all the way, and then at the tippy-top, they’ll sell it to maximize their profits.

We have seen this during the past 18 months when home prices spiked: people bought a home and moved in, and they moved out their other home, but didn’t sell it, expecting a 10% or 20% or 30% gain in price on a leveraged bet with a much bigger gain on equity. The math makes sense, though it doesn’t always work out, and now it’s starting to be time to put those vacant homes on the market, and here they come, just as home sales are dropping because layers and layers of buyers have been removed from the market by the rising mortgage rates and sky-high prices.

Active listings jumped. In May, inventory of homes actively listed for sale jumped by 26% from April and are suddenly up by 8% from a year ago, the first year-over-year increase since June 2019, according to the National Association of Realtors today. There were about 38,000 more homes listed for sale in May than a year ago (data via realtor.com):

The strategy of not putting the old home on the market after moving out has had the effect of creating record low inventories for sale, and inventories remain low, but that is now changing, and very suddenly so.

One, falling sales, as potential buyers left the market due to sky-high home prices and holy-moly mortgage rates. The NAR’s metric of “pending listings” for May, which tracks listings that are in various stages of the sales process, but before the deal closes, dropped by 12.6% year-over-year in May, after the 8.7% drop in April, the ninth month in a row of year-over-year declines: 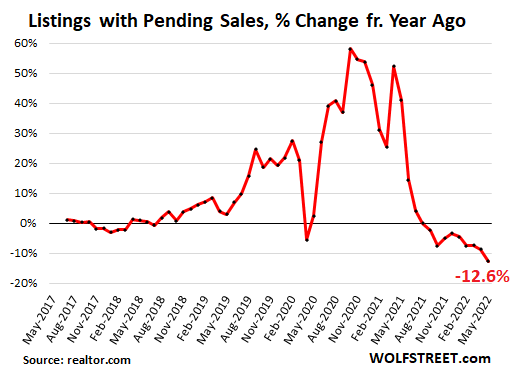 Reported later in the month, closed sales have also dropped for the ninth month in a row, and the closed sales data for May should be another doozie. 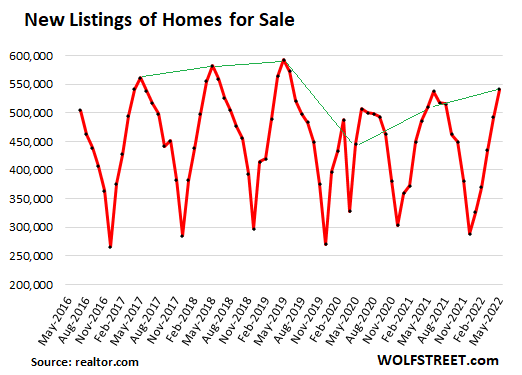 Price reductions jumped by 74% in May from April, and by 69% from May last year, in a sudden and massive U-turn from the very low levels last year and earlier this year: 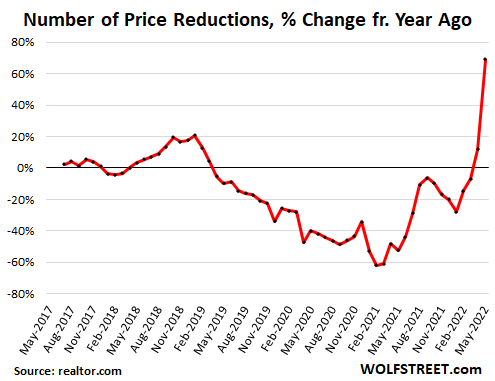 Huge Differences Among the 50 largest Metros

Among the largest 48 metros (data for Oklahoma City and Hartford were excluded due to “data inconsistencies,” the NAR said), the number of active listings in May jumped the most on a year-over-year basis in Austin (+85.8% from May last year); and fell the most in Miami (-32.1% from May last year).

Among the 48 metros, active listings fell in only six of them as homeowners there apparently haven’t got the memo yet.

Among the 48 metros, active listings surged by the double digits year-over-year in half of them (24).

The table is sorted by the year-over-year % change of active listings: