Large and persistent wealth gaps between Black and white Americans have attracted considerable attention from researchers and policymakers. This column presents a new long-run time series of the per capita wealth gap, from before the Civil War to 2020. A key finding is that severe racial differences in initial conditions after Emancipation have contributed greatly to today’s stalled progress in closing the racial wealth gap. The authors discuss the implications of these findings for policies that seek to foster greater racial wealth equality in the near future.

The racial wealth gap is one of the largest and most persistent economic disparities between Black and white Americans. According to SCF+, the average Black American has held less than 20 cents for every white dollar of wealth for the past several decades.

Such persistent racial gaps in wealth have fueled an ongoing discussion of what policies can close this form of inequality. Various studies have emphasised the importance of racial income and education convergence (Bertocchi and Dimico 2010, Margo 2007 and 2016, Chetty et al. 2018), housing policies (Akbar et al. 2019; Kermani and Wong 2021), and financial inclusion (Boerma and Karabarbounis 2021). Others discuss the role of assistance to families with children (Zewde 2020) and reparations for slavery in mitigating racial wealth inequality (Darity and Mullen 2020).

Our new study (Derenoncourt et al. 2022) contributes to this discussion by linking the current racial wealth gap to its past and answering the following questions: How did racial wealth inequality develop after Emancipation? How much can history explain today’s dynamics in the racial wealth gap?

We construct a long-run series of the racial wealth gap, defined as the ratio of white-to-Black per capita wealth, by drawing on numerous data sources, including complete-count digitised censuses, early state tax records, national reports, annual studies of Black economic progress, and historical and modern waves of the Survey of Consumer Finances (SCF+). Our large-scale data collection and harmonisation effort fill in about 100 years of missing data on the national racial wealth gap, from the 1880s to the 1980s, when most modern wealth surveys with race information began. We present our final series of the per capita white-to-Black wealth ratio from 1860 to 2020 in Figure 1. 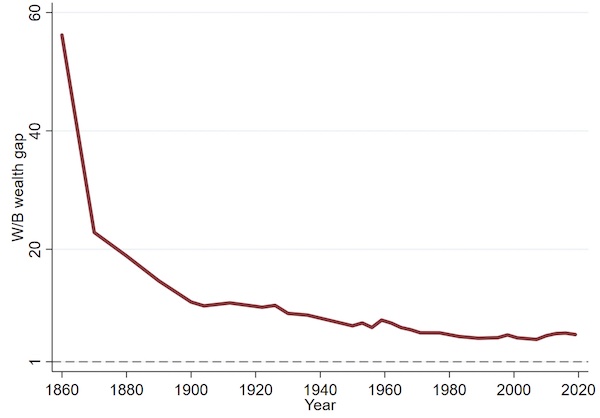 Starting from a ratio of nearly 60 to 1 on the eve of the Civil War, the racial wealth gap has evolved in a ‘hockey-stick’ pattern, to a ratio of 10 to 1 by 1920 and 7 to 1 during the 1950s, where it has hovered since. The period of fastest convergence was in the early decades after Emancipation. In 1860, before Emancipation, when 89% of the Black population was enslaved and thus legally barred from any form of wealth holding, the average Black American owned less than 2 cents for every white dollar of wealth. Shortly after the abolition of slavery in the US, the per capita white-to-Black wealth gap decreased drastically, by almost 60%. This continued convergence occurred in a period that saw initial enforcement of Black Americans’ rights during Reconstruction give way to a retrenchment of the racial order by the 1900s. Yet, even as the Jim Crow regime reached a crescendo, the racial wealth gap continued to fall, declining a further 10% (to a ratio of 9 to 1 by 1930).

During the decade of the Great Depression, we estimate a relatively stable gap of about 9:1 despite the fact that New Deal-era relief and social insurance policies tended to exclude regions or sectors with a large representation of Black workers. The 1940s up to the 1970s saw dramatic changes in the landscape of racial progress and discrimination. Yet, such changes appear to have had little impact on racial wealth convergence from a long-run point of view. Finally, the last 70 years of our time series are characterised by stagnation in the gap, at a level between 5 and 6, and, in the most recent decades, the wealth gap has actually widened rather than continued to close. 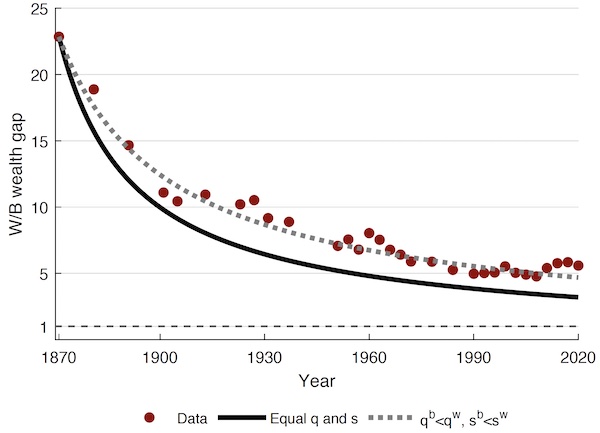 Compared to this idealised scenario, wealth accumulating conditions have not been equal across Black and white Americans, and convergence has accordingly been much slower. Our analysis shows that saving rates (s) and capital gains (q) have been consistently lower for Black Americans than for their white counterparts (see grey dotted line in Figure 2). The slower savings-induced wealth accumulation by Black Americans has been the main driver of convergence dynamics over the last century and a half. More recently, however, racial differences in capital gains have played the more dominant role in shaping the evolution of the racial wealth gap and have led to a divergence from its historical convergence path.

Starting from the 1980s, the racial wealth gap has completely stalled and even begun to widen. This period of divergence can be characterised by two features. On one hand, racial income convergence has completely stalled, thus switching off the contribution of savings-induced wealth accumulation to racial wealth convergence. On the other hand, capital gains on assets owned by white Americans have increased much more than those owned by Black Americans.

Such a strong increase in racial differences in capital gains can be explained by examining the wealth portfolios of white and Black Americans. In Table 1, we present the shares of different asset classes to their total asset values.1 On average, the portfolios of white households are more diversified than those of Black households, with about 40% of the wealth in housing and 20% in equity. Black households, in comparison, hold around 60% of their wealth in housing while investing less than 10% of their wealth in equity. This gap in equity holdings, in combination with a soaring stock market, has led white households to benefit more from high capital gains in equity market since 1980, leading to a widening of the racial wealth gap in capital gains.

Our study emphasises the outsized role of initial conditions under slavery in determining the speed of convergence between Black and white wealth. In light of these findings, we conclude that policies that redistribute large stocks of wealth, like reparations, lead to immediate reductions in racial wealth inequality. While policies targeting portfolio composition or fostering income convergence can return us to a convergence path, that could take hundreds of years to play out.

Nevertheless, we argue that these two types of policies are highly complementary if policymakers aim at persistently closing the racial wealth gap, as policies that redistribute stocks of wealth without addressing racial gaps in savings and capital gains have but a transient effect on the wealth gap.