Yves here. Many readers likely have stories, either personal or one step removed, of how inflation is leading to budget-driven cuts in or delays of medical treatment. One classic is that many put off dental exams and treatments during recessions.

Readers in civilized countries will likely have trouble relating to the problems described below.

By Heidi de Marco, Reporter and Producer for California Healthline, produces bilingual multimedia stories about California’s ethnic and low-income communities. Previously, she was a freelance video journalist and photographer specializing in work abroad, including a series of short-form videos about artisans in Guatemala supported by Novica and National Geographic. Originally published at Kaiser Health News 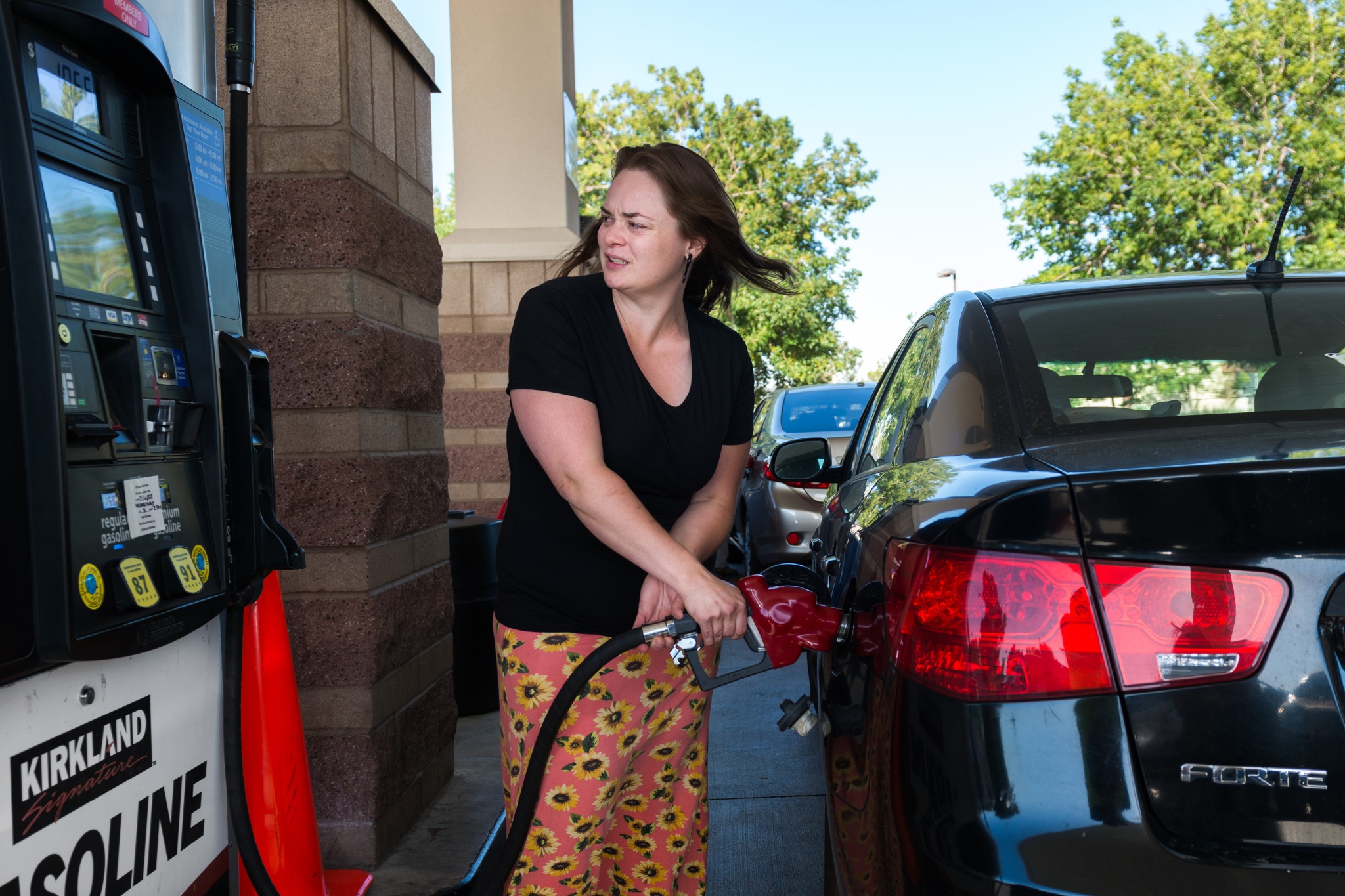 Deborah Lewis fills up her gas tank at a Costco in Lancaster, California, the day before she will drive her daughter 80 miles south to Los Angeles for cancer treatment. Lewis estimates she’s paying $30 more for each fill-up than she did a year ago because of inflation. (Heidi de Marco / KHN)

Deborah Lewis rose from bed before dawn and signed in to her phone so she could begin delivering fast food, coffee, and groceries to residents in this western patch of the Mojave Desert where test pilot Chuck Yeager broke the sound barrier generations ago.

Lewis prayed she would earn $75, just enough to fill the tank of her Kia sedan so she could drive her 8-year-old daughter, Annabelle, 80 miles south to Los Angeles to receive her weekly chemotherapy treatment for acute lymphoblastic leukemia. Just a year ago, the same tank of gas would have cost $30 less.

After a full shift as a gig worker, the mother had earned close to what she needed. “It took a lot longer than I thought,” she said.

High inflation is hitting families across the nation. According to the U.S. Bureau of Labor Statistics, consumer prices in July were up 8.5% from a year earlier, one of the biggest increases in recent decades. The Bureau of Economic Analysis found that consumers are spending the most on housing and utilities, food, and medical care.

Overall wages continue to climb, but after adjusting for the rising price of goods and services, workers’ paychecks declined 3.5% over the past year. A recent KFF poll found that 74% of registered voters put inflation, including rising gas prices, at the top of their concerns.

For millions of families living with chronic diseases — such as heart disease, diabetes, and cancer — or other debilitating conditions, inflation is proving a punishing scourge that could be harmful to their health. Unlike dining out less or buying fewer clothes, many patients don’t have a choice when it comes to paying for medicine, medical supplies, and other ancillary costs. Some must drive long distances to see a specialist, and others must adhere to a strict diet.

“Chronic disease patients are usually on the front lines of seeing a lack of supplies or an increase in out-of-pocket costs,” said Paul Conway, chair of policy and global affairs for the American Association of Kidney Patients.

Health care has grown increasingly unaffordable. Half of adults report having difficulty paying their health costs, according to KFF polling. One-third say they or a family member has skipped recommended medical treatment in the past year because of the cost, and one-quarter of adults report rationing pills or leaving prescriptions unfilled.

Inflation has squeezed families further by driving up the price of gas and food, as well as medical products such as needles and bed-wetting pads. Health care costs have risen 5.1% since July 2021, and medical commodities — which include prescription and over-the-counter drugs, medical equipment and supplies — are up 3.7%.

Inflation is particularly detrimental to the health of low-income patients; studies have found a strong link between poverty and health. According to the California Budget & Policy Center, more than half of California households making $50,000 or less struggle to pay for food, housing, and medical costs.

For Deborah Lewis and her husband, Spencer, their concerns about the rising cost of gas have never been about skimping on summer travel or weekend getaways. It’s about making sure they have enough gas to drive Annabelle to Children’s Hospital Los Angeles for chemotherapy and other medications delivered through a port in her chest.

The family relies on Spencer’s disability check, which he receives because he has Ehlers-Danlos syndrome, a hereditary disorder that causes him severe joint pain. He also copes with broken discs in his spine and a cyst pushing against his spinal nerves. In January, he stopped working as a pest control technician, shifting more financial responsibilities to his wife.

The disability check covers rent and utilities, leaving Deborah’s freelance work to cover gas. They also get $500 a month from Miracles for Kids, which helps families with critically ill children.

On a June morning, Deborah packed snacks for the drive ahead as Annabelle, wrapped in her favorite blanket, waited on the couch. Most of her long blond hair has fallen out because of her treatments. The night before, Deborah spent $73.24 to fill up at Costco.

Before they left, Deborah learned the couple carried a negative balance in their checking account. “I have so much on my plate,” she said.

The family has already delayed health care for one family member: Their dog, a Doberman pinscher named Chief, skipped a vet visit for a mass pushing up his intestines.

Politicians are keenly aware of inflation’s leaching effects. In October, most California households will receive “inflation-relief checks” of up to $1,050 to help offset the high cost of gas and other goods under a budget Gov. Gavin Newsom signed in June. The average price of a gallon of gas in California remains above $5, while the national average is about $4.

But health experts worry that even with the one-time aid, affordability could become a life-or-death issue for some Californians. For example, the price of insulin can range from $300 to $400 per vial without insurance.

“We’ve seen a number of patients living with diabetes and on a fixed income greatly impacted by rising inflation,” said Matthew Freeby, an endocrinologist and director of the UCLA Gonda Diabetes Center. “Both Type 1 and Type 2 diabetes typically require multiple prescription medications that may already be costly. Patients have had to choose between day-to-day finances and their lifesaving medications, such as insulin or other treatments.”

Inflation is also a challenge for people who depend on certain foods as part of their health care regimen, especially with food prices up 10.9% in the past year.

Toyan Miller, 60, an integrative nutritional health practitioner from San Dimas, California, has been diagnosed with vasculitis and Hashimoto’s thyroiditis, two autoimmune diseases that cause inflammation. Miller’s medically tailored diet requires gluten-free, organic food. Miller said she’s dipping into her savings to afford the average of $300 she spends each week on groceries. Last year, she spent about $100 less.

Even those who are healthy may find themselves helping family or friends in need.

In the mountainous Los Angeles neighborhood of Laurel Canyon, Shelley Goldstein, 60, helps her parents, both in their 90s, pay for items, such as incontinence products, not covered by health insurance. Goldstein’s father was recently diagnosed with Alzheimer’s disease and lives in a retirement community with his wife, Doris.

“Those are basic things, but that’s like $70 a month between the two of them,” said Goldstein, who works as a speaking coach. “That’s a lot.”

Goldstein worries about how much more of her parents’ health costs she’ll have to shoulder since they are pensioners on fixed incomes.

“What keeps me up at night right now is what’s to come,” she said. “There’s two of them. My parents’ increased need for pads, meds, and other medical support increases as their health declines.”