It seemed likely that as highly speculative plays like crypto, NFTs, and SPACs crashed to earth, venture capital would be soon to follow, and not simply because some venture capital firms dabbled heavily in these bezzles.

Today, the Financial Times confirmed our expectation in a well-documented piece Venture capital’s silent crash: when the tech boom met reality. Those of us who learned in the dot-com era that absolutely lunatic ideas such as thinking it’s perfectly reasonable to assign ginormous valuations to companies with zero prospect of ever turning a profit, because eyeballs, can become pervasive before they finally fail. Even then then supposedly sober McKinsey took dot-com equity in lieu of fees and had to write off $200 million.

Key sections of this important story, which I urge you to read in full. The article starts by warning that venture capital has lax valuation rules, which has allowed fund managers to put off writedowns. But:

Only companies with an urgent need for capital have been forced into a full reckoning with reality, as investors putting in new money demand an up-to-date valuation. Klarna, the Swedish buy now, pay later company, sent shockwaves through the market for private fintech companies earlier this month when it raised money at a $5.7bn valuation — 87 per cent less than its venture capital backers judged it was worth a year ago.

Yet that savage price cut merely echoed a turn that had already set in for similar companies in the public markets. Shares in Affirm, a US buy now, pay later company that went public early last year, have also fallen 87 per cent from a peak last November. Fast-growing fintech company Block is down 78 per cent, after $130bn was wiped from its market value.

Many more will have to follow Klarna’s lead before the full extent of the reset sinks in. Despite some signs that people are getting more realistic about valuations, “We don’t yet have the full puking that’s required,” says [Josh] Wolfe [co-founder of Lux Capital].

The article also points out a ginormous amount of money went new venture capital investments in 2021: 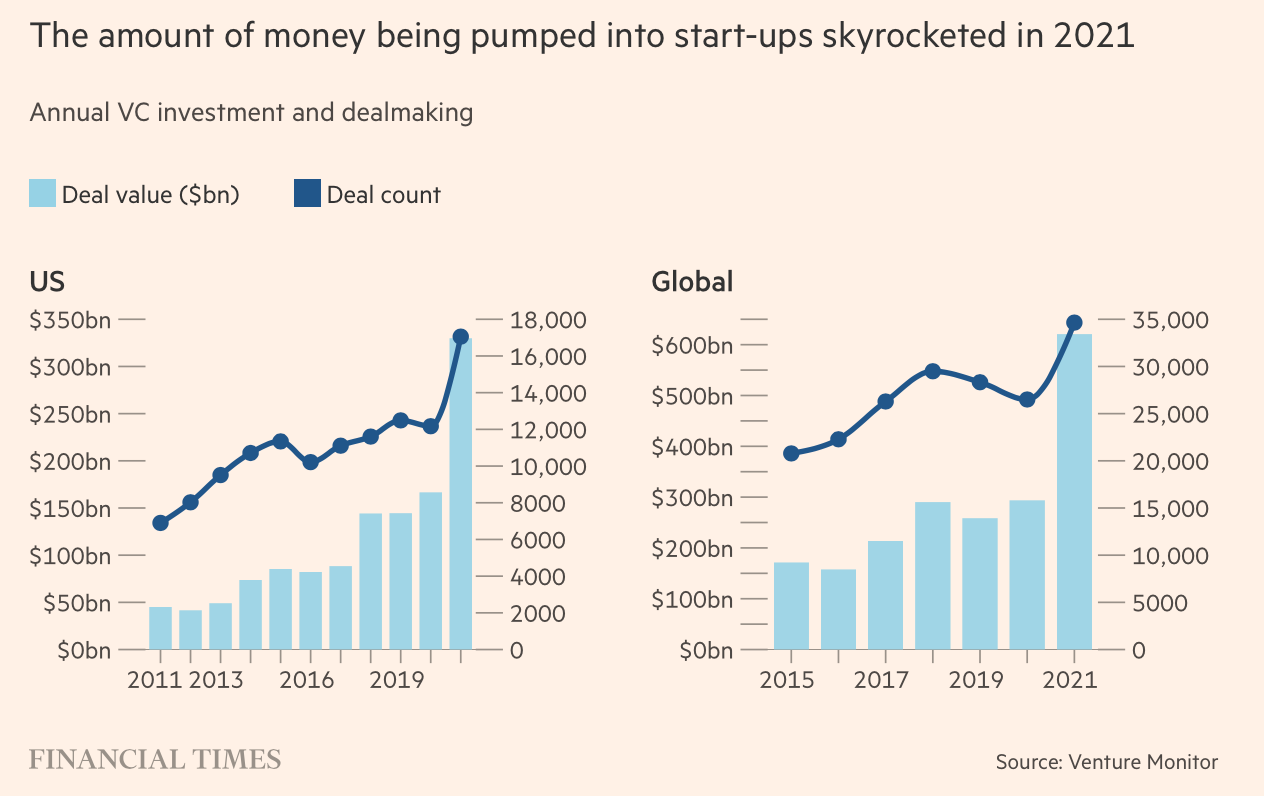 And it is a bigger money wave than in the dot-com mania:

The scale of the most recent venture boom has dwarfed that at the end of the 1990s, when annual investment peaked at $100bn in the US. By comparison, the amount of cash pumped into American tech start-ups last year reached $330bn. That was twice was much as the previous year, which was itself twice the level of three years earlier.

Note that the CPI calculator says that $1 in January 2000 equaled $1.65 at the end of 2021, so even in inflation-adjusted terms, this is twice as much money cashing young ventures as during the dot-com mania. And back then, the rapid adoption of the Internet was producing fundamental shifts in business and consumer behavior, and along with it, lots of commercial opportunities. The idea that fortunes could be made, as Amazon and Google and Facebook showed, was not entirely delusional.

By contrast, this is not an era of fundamental advances in technology. So it should hardly come as a surprise that the loft valuations were more a function of cheap money producing investors desperately chasing returns, as opposed to bona fide “innovation”.

Carried along by this immense tide of capital, many venture capitalists now admit their market was overcome by a race to invest at almost any price — though most like to claim their own funds were able to sidestep the worst of the excesses.

“If there was one word to describe it, it was Fomo,” says Eric Vishria, a partner at Benchmark Capital. The “fear of missing out” he points to brought a stampede at the peak of the market. It wasn’t just the high prices investors were prepared to pay not to miss the boat: periods for conducting due diligence were drastically shortened and protections that investors usually build in to protect their investments fell by the wayside….

As a result, according to Vishria, the venture capital industry became bloated. Many companies stayed private far longer than was usual for a start-up, drawing on private investors rather than moving to the stock market.

Let’s focus on the valuation issue. The pink paper missed, as did far too many late stage investors, that widely-accepted valuation rules of thumb greatly exaggerated the market value of venture capital backed companies. Unlike public companies, where the market capitalization is based on public shares, and they are all fungible (absent the occasional dual-class structure), venture deals have multiple rounds of funding, with later investors typically restricting the rights of the investors in earlier rounds to somewhat offset the typically higher nominal price paid. As we wrote in 2017, recapping a Stanford paper, Fake Unicorns: Study Finds Average 49% Valuation Overstatement; Over Half Lose “Unicorn” Status When Corrected. Key findings:

A recent paper by Will Gornall of the Sauder School of Business and Ilya A. Strebulaev of Stanford Business School, with the understated title Squaring Venture Capital Valuations with Reality, deflates the myth of the widely-touted tech “unicorn”. I’d always thought VCs were subconsciously telling investors these companies weren’t on the up and up via their campaign to brand high-fliers with valuations over $1 billion as “unicorns” when unicorns don’t exist in reality. But that was no deterrent to carnival barkers would often try to pass off horses and goats with carefully appended forehead ornaments as these storybook beasts. The Silicon Valley money men have indeed emulated them with valuation chicanery.

Gornall and Strebulaev obtained the needed valuation and financial structure information on 116 unicorns out of a universe of 200. So this is a sample big enough to make reasonable inferences, particularly given how dramatic the findings are.1 From the abstract:

Using data from legal filings, we show that the average highly-valued venture capital-backed company reports a valuation 49% above its fair value, with common shares overvalued by 59%. In our sample of unicorns – companies with reported valuation above $1 billion – almost one half (53 out of 116) lose their unicorn status when their valuation is recalculated and 13 companies are overvalued by more than 100%.

Another deadly finding is peculiarly relegated to the detailed exposition: “All unicorns are overvalued”: 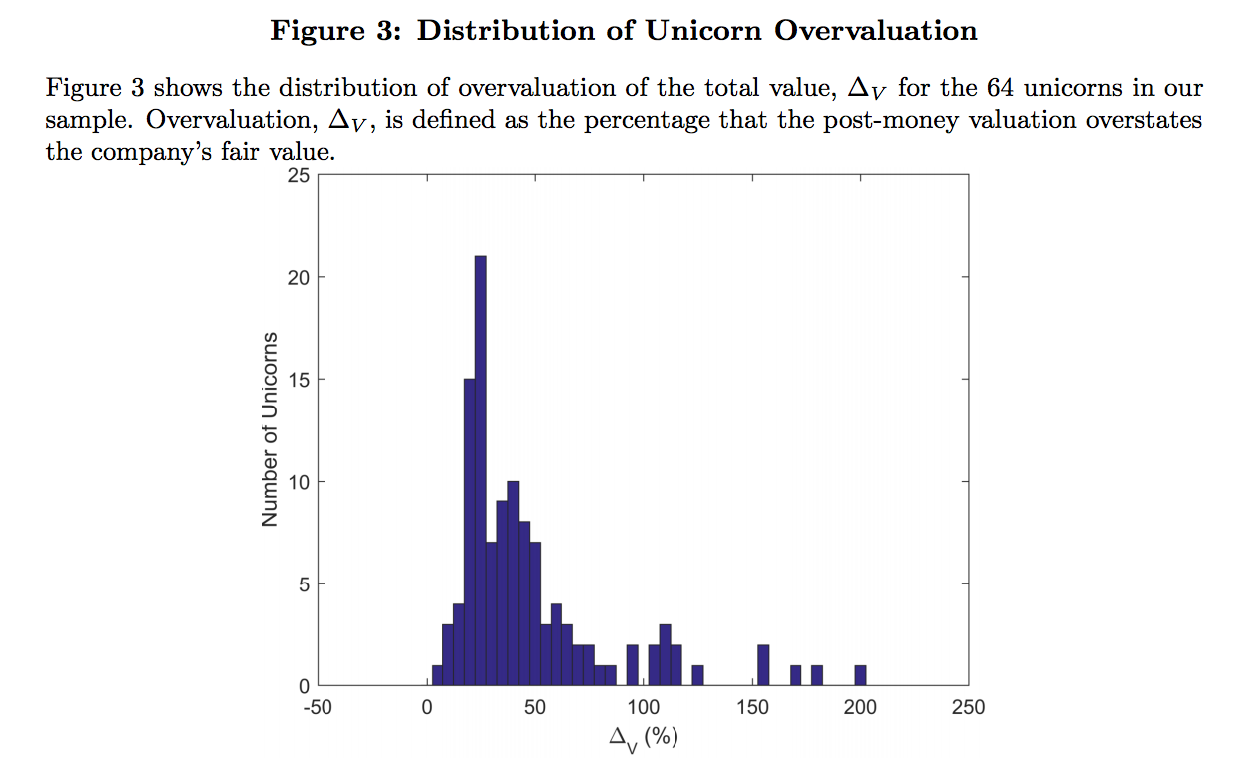 How can there be such a yawning chasm between venture capitalist hype and proper valuation?

By virtue of the financiers’ love for complexity, plus the fact that these companies have been private for so long, they don’t have “equity” in the way the business press or lay investors think of it, as in common stock and maybe some preferred stock. They have oodles of classes of equity with all kinds of idiosyncratic rights. From the paper:

VC-backed companies typically create a new class of equity every 12 to 24 months when they raise money. The average unicorn in our sample has eight classes, with different classes owned by the founders, employees, VC funds, mutual funds, sovereign wealth funds, and strategic investors…

Deciphering the financial structure of these companies is difficult for two reasons. First, the shares they issue are profoundly different from the debt, common stock, and preferred equity securities that are commonly traded in financial markets. Instead, investors in these companies are given convertible preferred shares that have both downside protection (via seniority) and upside potential (via an option to convert into common shares). Second, shares issued to investors differ substantially not just between companies but between the different financing rounds of a single company, with different share classes generally having different cash flow and control rights.

Determining cash flow rights in downside scenarios is critical to much of corporate finance, and the different classes of shares issued by VC-backed companies generally have dramatically different payoffs in downside scenarios. Specifically, each class has a different guaranteed return, and those returns are ordered into a seniority ranking, with common shares (typically held by founders and employees, either as shares or stock options) being junior to preferred shares and with preferred shares that were issued early frequently junior to preferred shares issued more recently.

The way the VCs mislead the press and the general public is how that they assign a valuation after each round of fund-raising assuming all classes of equity have the same value.

The linchpin finding from the authors:

Mind you, even though this study focused on unicorns, the same rampant overvaluation is likely to be found in all venture-capital-backed companies that were private long enough to have undergone, say, six or more funding rounds. Moreover, the overvaluation could well be worse in non-unicorns, since the big high-fliers would presumably be the most attractive to the late-stage investors. They would be likely to impose tougher terms on the also-rans, which would increase the post-money-valuation distortion.

As we pointed out in our 2017 writeup, it wasn’t just venture capitalists who were enabling this valuation chicanery, particularly by using devices like IPO ratchets which would further inflate post-money valuations. It was also that fiduciaries like Fidelity and T. Rowe Price that regularly invested in late-stage private deals, also fell in with the valuation hype rather than doing the hard work of a proper assessment.

So if this bubble deflates nastily, just as it did in the dot-bomb days, know that plenty of supposed professionals who should have known better very happily went along for the ride. A jaded Financial Times columnist, John Dizard, explained how this worked in 2007:

A once-in-10-years-comet- wiping-out-the-dinosaurs disaster is a problem for the investor, not the manager-mammal who collects his compensation annually, in cash, thank you. He has what they call a “résumé put”, not a term you will find in offering memoranda, and nine years of bonuses….

All this makes life easy for the financial journalist, since once you’ve been through one cycle, you can just dust off your old commentary.

And as Dizard explained, most of the incumbents will dust themselves off after a year or two of lean living and then go back to an approximation of their old normal. The ones at most risk are middle-level staffers, senior enough to be costly but not perceived to be indispensable. But even most of then land pretty well, even though not always back in the fund management game. The fact that running money is such a “Heads I win, tails you lose” game is the reason even serious bear markets don’t change behavior as much as they ought to. Investors, just like the customers of fortune-tellers, want to believe.