British political horse racing is over my pay grade. However, the Tories themselves are broadcasting what an utter shitstorm the Truss government has become. It isn’t just that it will be a miracle if Truss survives this week. It’s that there’s no Conservative remotely credible in the wings, even before factoring in that the UK desperately needs real leadership, something sorely in absence across the entire West.

Without going into a blow-by-blow, Tuesday featured the ouster of Home Secretary Suella Braverman on trumped up grounds, and a shambolic vote on fracking where MPs were accused of roughing up voters in the “No” queue.

Some of the byplay:

“The lettuce might as well be running the country”
pic.twitter.com/4nWKNG5QrY

Chronology of the madness:

* Nobody told chief whip Wendy Morton, who quit on spot

* Truss barracked by own MPs in voting lobby

And from across the Channel:

No one should or can be happy about the political & economic turmoil in the UK. There are so many reasons today we must find stability and cooperate, across Europe. Not all of these difficulties are due to Brexit, I am simply convinced that Brexit makes everything more difficult.

The BBC has a live blog on the Truss death watch. AM updates include at least 13 Conservative MPs calling for her to resign and Keir Starmer giving a preview of his call for a general election.

It appears the low bar the Tories are trying to meet is to oust Truss and replace her with someone who might enable them to limp through the next two years to the next general election (under the Fixed Term Parliament Act, it’s much harder to force a general election than in the past). But who is there to rally behind? The twice-rejected and therefore presumed dead Rishi Sunak? Penny Mourdaunt? Jeremy Hunt? Or God forbid, the return of Boris Johnson?

Back in during the 1970s stagflation, the US was deemed ungovernable by some because unions and workers generally allegedly had too much power. Some manufacturing plants were held up as examples, where employees supposedly showed up drunk if at all and regularly defied management. Yet ironically, one of the poster children of this sort of operation was put by GM in a joint venture with Toyota as NUMMI under Toyota management, and Toyota bought it to above Toyota averages for the level of output and product quality. So was the root problem really uppity labor or sclerotic, disconnected management?

We’ve now had roughly 30 years of rule by generalist elites who not only take perilous little interest in details but have a tendency to treat the presumed lower orders who worry about them with quiet contempt. So the UK has hollowed out one of its proud institutions, the NHS, to advance private profits and inequality, and then find it buckling under a pandemic. But any consideration of reversing course?

And more immediately, the UK is in the midst of an inflation/shortages crisis. The famed deficit-blowing mini-budget’s big spending item was two years of energy price subsidies. The officialdom has now determined the most the UK can afford is through April. How many households will default due to the one-two punch of housing and energy costs come mid next year? And how will the UK banking system fare with banks already seeing business failures (if nothing else, all those pub closures?)

So the West has become ungovernable. It has managed to breed out anyone who might be capable of and interested in making the wheels and gears of the system run better. Its soi-disant leaders hollowed out their own jobs, confident that those oh-so-capable private sector types would do what was best for everyone by acting in their own interest. But greed is seldom good for anyone, even the perps, although the trappings are mighty pretty.

Andrei Martyanov’s critique, as recounted at American Affairs by one-time Naked Capitalism writer Phillip Pilkington, captures some key elements of the US pathology, which it has successfully exported to the UK and Europe:

Martyanov’s economic analysis may reflect his Soviet materialist education, but ultimately, he views America’s core problem as being a crisis of leadership. He traces this problem back to the election of Bill Clinton in 1993. Martyanov argues that Clinton represented a new type of American leader: an extreme meritocrat. These new meritocrats believed their personal capacities gave them the ability to do anything imaginable. This megalomaniacal tendency, Martyanov observes, has been latent in the American project since the founding. “Everything American,” he writes, “must be the largest, the fastest, the most efficient or, in general, simply the best.” Yet this character trait has not dominated the personality of either the American people or their leaders, he says. Rather, the Ameri­can people remain today “very nice folks” that “are generally patriotic and have common sense and a good sense of humour.” Yet in recent times, he argues, something has happened in American elite circles that has let the more grandiose and delusional side of the American psyche run amok, and this has happened at the very time when America is most in need of good leadership.

Martyanov believes that America’s extreme meritocrats vastly over­estimate their capabilities. This is because, rather than focusing on the strengths and weaknesses of the country they rule, they have been taught since birth to focus on themselves. They believe that they just need to maximize their own personal accomplishments and the good of the country will emerge as if by magic. This has led inevitably to the rise of what Martyanov characterizes as a classic oligarchy. Such an oligarchy, he argues, purports to be meritocratic but is actually the opposite. A proper meritocracy allows the best and the brightest to climb up its ranks. But an oligarchy with a meritocratic veneer simply allows those who best play the game to rise. Thus, the meritocratic claims become circular: you climb the ladder because you play the game; the game is meritocratic because those who play it are by definition the best and the brightest. Effectively, for Martyanov, the American elite does not select for intelligence and wisdom, but rather for self-assured­ness and self-interestedness.

This creates an echo chamber in the halls of power. The elite incentive structure does not allow for self-correction when error is detected. Rather, when mistakes are made, they are ignored and forgot­ten.

Back to the UK’s political and underlying crises. I trust UK readers will weigh in on the events of the day, since they look likely to be busy, as well as “Whither Tories?” and whether there is much hope of the country pulling itself out of its current nose dive and what measures might alleviate the situation. Not that the US is on a much different trajectory, mind you. It’s just that being big, well endowed with natural resources, and still somewhat rich means it takes pathologies longer to play out.

Update 9:00 AM. Truss has resigned. Sorry be brief but this is after my pumpkin hour. Summary from BBC. Note Jeremy Hunt has already said he will not stand for PM. 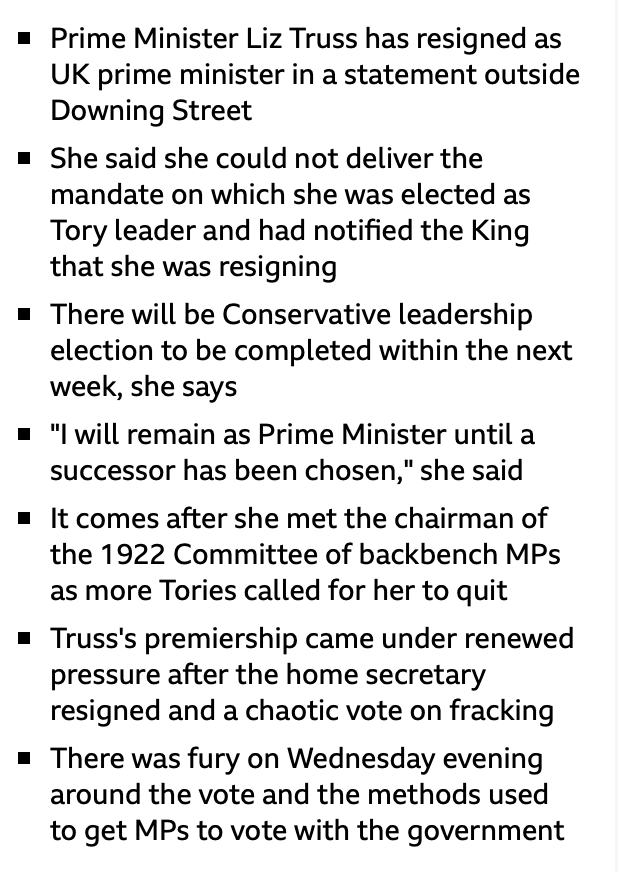