The economic consequences of receiving essential help from a friend, relative, or colleague can be momentous. But there are countless situations in which people don’t ask for help or, conversely, in which people with the ability to help don’t offer it. This column examines the factors that determine the offering, asking, and granting of help. Asking entails the risk of rejection, which can be painful, generating a trap wherein those in need hope – but don’t ask – for an offer, while willing helpers wait for a request, resulting in significant inefficiencies.

Imagine a not unusual COVID scenario. A friend who lives alone catches COVID, and you suspect she would benefit from some assistance – perhaps a grocery or drugstore delivery. You are very busy and would prefer not to help, but suspect she might know that you know she would benefit from it. If you knew that she knew that you were aware of her need, or if she explicitly asked for help (in which case you would clearly know she needed it), you would certainly help. However, she fails to ask because she is afraid to. If she asked and you turned her down, she would be devastated by the rejection. Although asking for help might seem like a trivial matter, as suggested by the common exhortation “It can’t hurt to ask”, the example illustrates that asking for help and providing it often involve complex calculations. In particular, it very much can hurt to ask, because asking exposes one to the possibility of a painful rejection.

The economic consequences of receiving needed help – or not – from a friend, relative, colleague, professor, or supervisor, can be momentous. A person struggling financially who does not get a loan from a relative may instead take out a costly payday loan. A student who does not get help from his classmates or adviser may fail an exam, jeopardising his educational future. In thinking about how such helping interactions may (fail to) occur, we look to two sources: the demand side (the decisions of people in need to either ask for help or not), and the supply side (the decisions of potential helpers to either offer help proactively or not, and to accede to a request or not). Many of us can think of situations in which we were in need but did not ask for help, or conversely when we had an opportunity to offer help but chose not to.

Why don’t people in need ask for help? Moreover, if potential helpers would give if asked (which they often do), why don’t they offer proactively? Social scientists have proposed a number of explanations for asking and giving behaviours. On the asking side, people may not ask because they fear revealing that they are needy or incompetent (Tessler and Schwartz 1972), or because they don’t want to be indebted to others (Greenberg and Shapiro 1971). On the giving side, the main question has been not why people don’t want to give (since giving is costly), but rather why many do give. Answers proposed include altruism (of different types, see e.g. Ottoni-Wilhelm et al. 2017), social and self-image motives (Bénabou and Tirole 2006), and reluctance to violate expectations of helping (Dana et al. 2007, DellaVigna et al. 2012).

As our opening example illustrates, both offering and asking decisions can hinge on uncertainties that are inherent in many interactions. A person in need may wonder, “How much does this potential helper care about me and our relationship? Why haven’t they offered? If I ask them, will they say yes?” At the same time, the potential helper may be wondering, “Does this person actually need my help? Do they know that I know that they need help? Are they going to ask me? Will I look selfish if I don’t offer?”

In a new paper, we develop a game-theoretic model capturing interactions between a person in need and a potential helper (Bénabou et al. 2022). The types of help the theory applies to are very broad, ranging from material resources like money, effort, and time (e.g. housework assistance, guidance on how to complete a task at work), to actions that signal caring about someone, such as accepting a dating invitation or ceasing a behaviour they dislike. The theory is especially applicable to individuals who know one another (friends, family, colleagues) but also extends to relative strangers and to relationships between organisations and their employees, who often hesitate to ask for a raise, promotion, or accommodation (e.g. Babcock and Laschever 2009).

There are three stages, shown in Figure 1. First, the potential helper can either offer help proactively or not. If they offer, the help is always accepted, or at least the cost of helping (cancelling a meeting, buying groceries) is paid. If they do not offer, the action proceeds to the second stage, where the person in need can choose to ask. If they do not ask, the game ends, with no help given. If they ask, it enters the third stage, in which the potential helper can consent to or reject the request. 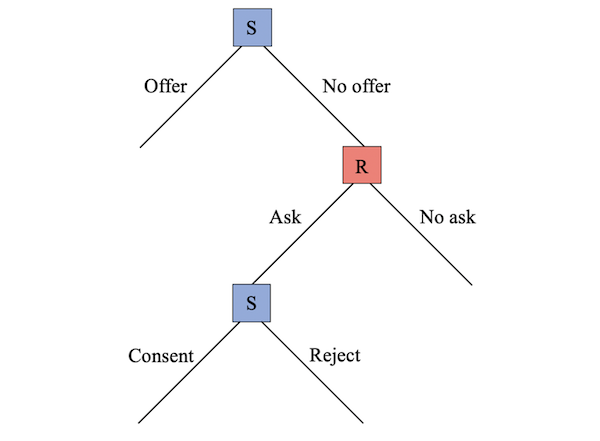 The crux of the model is that in the absence of an ask, the lack of helping can be attributed to one of two things: the potential helper’s selfishness, or her unawareness of the need (or its severity). Thus, while the lack of an offer is not good news, it does not sting too badly, as there is a plausible excuse for it. When an ask occurs, however, it conveys substantial information about the asker’s situation, so the ‘ignorance of need’ explanation is eliminated. A failure to help can now only mean that the potential helper doesn’t care much about the person in need, or value the relationship.

What This Gets Us

The model generates many insights. First, a person may not ask for help even if their need is severe and the potential helper would very likely agree to help if told about it. This form of information aversion occurs because being rejected hurts more than being consented to feels good: receiving help is good news and makes a person feel more valued, but the negative inferences from a rejection can be much more devastating. Moreover, paradoxically, because getting rejected for a very serious need hurts more than getting rejected for a minor one, in some cases the needier a person is, the less likely they are to ask.

The model also explains why a person may not offer help proactively, even if they would be willing to help in response to an ask. Offering help is risky: to be credible, an offer must involve some commitment, which means giving up the option to fully ascertain the need before deciding to help or not. Examples include taking time from work to make oneself available, or, in our COVID case, proactively bringing a home-cooked meal or groceries without knowing how useful or appreciated that will be. Even a relatively caring person may then prefer to wait for an ask, rather than pledge or deliver help while unsure of whether the benefit will justify the cost. Importantly, the more caring the person, the more willing they are to take that risk, which also means that not receiving an offer is already bad news about the other person’s generosity (though typically less hurtful than an explicit rejection of an ask).

The parties’ equilibrium behaviours resulting from this two-sided private information can generate important inefficiencies, such as what we call a ‘waiting trap’. Suppose that a potential helper does not offer help proactively, to avoid the risk of helping ‘unnecessarily’, choosing instead to wait for an ask. As explained, the person in need should then revise downward their view of the potential helper’s level of caring. This pessimism, in itself, may discourage asking. In such a case, both parties will wait indefinitely for the other to make the first move, and a helping interaction that both would have wanted to occur (under common knowledge) will fail to materialise.

Asking and giving decisions can significantly impact the economic and psychological outcomes of both sides (e.g. Aknin et al. 2013, Andreoni et al. 2010). A better understanding of what underlies these behaviours also delivers insights about how to improve these interactions. For instance, our analysis shows how organisations can benefit from fostering a ‘culture of asking’, in which no proactive offering should be expected (rendering the lack thereof uninformative), and expectations are coordinated instead on people in need making the first move and asking for help. Another application is the use of intermediaries and platforms to convey both requests and responses (e.g. GoFundMe and other crowdfunding campaigns, or even apps like Tinder). Besides reducing transactions costs, these serve as devices that facilitate asking by dampening the visibility and salience of rejections.