Yves here. BuzzFeed got its first investor funding in 2006, the same year Naked Capitalism launched. Despite raising $700 million from investors, mainly in equity, BuzzFeed has only three quarters to go at current burn rates, per Wolf Richter’s estimates. Remember that external funding was not BuzzFeed’s only source of cash: it sold ads and entered into various sponsorship deals.

Nevertheless, as Lambert said, where did the money go? If we’d had only a meager $7 million over this time frame on top of our other funding sources, your humble blogger is pretty confident we would have caused more trouble than we have, which includes getting three government officials to leave office.

On the first day of trading after its merger with a SPAC, on December 6, 2021, shares of BuzzFeed [BZFD] jumped from the pre-merger price of $10 to $14.77 intraday, and then collapsed. On June 6, the lockup period expired, when certain insiders could sell, and the already beaten-down shares plunged another 40% in one day. Today the stock was trading as low as $1.02 and closed at $1.04, a new low, down 93% from the peak. If the stock drops further, the company may have to try to do a reverse stock split, maybe 1 to 25, such as Hippo, or whatever, to keep its shares from getting delisted.

Charts like this give me the willies about the free-money era, deeply infested with consensual hallucination, as I call it, that was already coming to an end when the SPAC merger was pushed out the window. But there is more to it, as we’ll see in a moment: 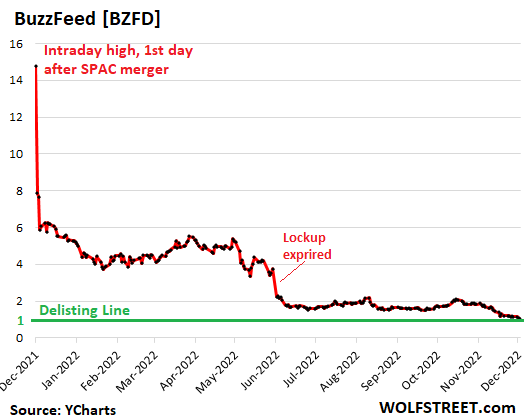 Revenues grew by 14% in the quarter, to $104 million, but that gain was driven by the $300-million acquisition of Complex Networks that closed in December last year. The net loss jumped to $27 million, while cash on hand dwindled to $57 million at the end of September.

How did a company that had raised nearly $700 million in funding since its founding in 2006, including from SoftBank, fall so far? Turns out, BuzzFeed is one of the lucky “free” online publishers. Many of the not so richly funded “free” online-only publishers are already gone.

The big promise in the early years of the internet was “free.” Publishers would put their stories, videos, and images online for free and would make money from eyeballs, as it was called during those crude days – from ads that these readers were looking at. As the ad technologies and metrics became more sophisticated, and as giants came into being whose tentacles started controlling all aspects of internet advertising, including the infrastructure to deliver the ads, and as “ad tech” was born to siphon out more and more of the funds that flow from advertisers in direction of the publishers, well, publishers got less and less of the revenue stream. But they have all the expenses of producing the content.

Many of the online-only publishers, including some well-known names, no longer made enough in revenues to pay for salaries and other expenses, ran out of cash, and shut down. Others were acquired by big companies. Most of the big publishers and many not so big ones began hiding some or all of their online content behind paywalls. But there are still some of us out there believing in “free,” and BuzzFeed is one of them, and it’s having one heck of a time.

BuzzFeed has raised nearly $700 million in total funding: $500 million in seven rounds of venture funding, including from Hearst Ventures, Softbank, Lerer Ventures, New Enterprise Associates, RRE Ventures, Andreessen Horowitz, and others. The biggest chunk came from NBCUniversal. Then, in 2020, it borrowed $50 million.

In December 2021, BuzzFeed went public via merger with a SPAC, and got, well, only $16 million in equity funding, of the $277 million that the SPAC itself raised during its IPO, as 94% of the SPAC shareholders chose to redeem their shares and get their money back, rather than watch BuzzFeed burn through their money (I discussed yesterday how the SPAC scheme works and who makes money when). As part of the SPAC merger, it also raised $150 million in a convertible debt offering.

At the time of SPAC merger, BuzzFeed’s implied valuation was a ridiculous $1.5 billion. Today, the market capitalization is down to $146 million.

BuzzFeed tried to grow via some big acquisitions, including the money-losing HuffPost from Verizon in 2020, in what was described as a stock deal; and Complex Networks, a youth-oriented media and entertainment company, from Hearst and Verizon, just after the SPAC merger closed, for $200 million in cash and $100 million in equity.

The layoffs started in 2017, with 100 people being shown out the door. In 2019, 200 people were laid off. In 2020, BuzzFeed announced a pay cut, always very helpful for morale. In the spring of 2021, the HuffPost laid off about 70 people, a month after the acquisition closed. In the spring of 2022, BuzzFeed News trimmed its staff via voluntary buyouts, following an announcement by CEO Jonah Peretti to analysts that the company would shed between 25 and 50 employees via voluntary buyouts. As part of it, two editors announced their departure on Twitter.

And yesterday, BuzzFeed announced another round of layoffs, this time 12% of its remaining staff, which would amount to about 180 people.

In a message to employees, Peretti wrote that to “weather an economic downturn,” the company had to “readjust” its “cost structure.” He said that revenues were getting hit. He blamed two factors: “worsening macroeconomic conditions” and “the ongoing audience shift to vertical video, which is still developing from a monetization standpoint” or whatever.

In the SEC filing, the company added a third factor to blame, in addition to the other two: the “integration” of Complex Networks including “eliminating redundancies.”

But cost cutting is expensive: The company estimates that it will cost $8 million to $12 million, such as severance pay, to cut these costs, and that it will book those costs in Q4, which will add to its losses in Q4.

When it reported its earnings on November 14, the company said that it was “focused on preserving cash,” of which it didn’t have a lot anymore. At the end of September, it had $59 million. How long will that last?

Its restructuring costs will amount to about $8 to $12 million, mostly related to the layoffs. So that’s cash out the door.

In Q3, it had a net loss of $27 million (and for the nine months, $95 million). But about $15 million were non-cash expenses (depreciation, amortization, impairment, and stock-based compensation). The remaining loss in Q3 of $12 million amounted to cash outflow.

So about $10 million in cash outflow due to restructuring charges and additionally about $12 million per quarter? At this rate of cash-burn, the company has about three quarters left – through Q2 2023 – before it has to start selling off the computers, chairs, tables, and coffee cups left behind by its laid-off employees to stay afloat.

Unlike many of my other Imploded Stocks, such as Carvana, that are in an industry where they should make money but don’t due to their idiotic Silicon Valley business model (the bigger the losses, the better), BuzzFeed is in an industry that is getting gutted by Silicon Valley’s ad tech.

BuzzFeed is facing what many “free” online publishers face: Revenues from advertising, organizing events, affiliate relationships with Amazon, etc. are not enough to cover the salaries and other costs involved in producing the content – even in Good Times. The “free” internet was fun while it lasted, but ad tech made sure it won’t last.

There are now some massive lawsuits by some of the biggest publishers in the world and related regulatory actions to deal with this, but it’s unlikely anything real will come of it.