AMLO may seem like a curious choice for “Tyrant of the Year,” especially given the fierce competition for the title. But once you see who leads and finances the NGO in question, it all makes a bit more sense.

Index on Censorship is a London-based NGO that has been around since the Cold War and bashfully describes itself as “the global voice of free expression.” It publishes a quarterly magazine of the same name that features articles on free speech and the restrictions imposed on it by certain governments around the world. At the end of each year, it conducts a curious exercise: it asks its readers to vote for whom they believe was “Tyrant of the Year.” For 2022, despite apparently “tough” competition, “one leader surged ahead, by a mile,” the NGO says. That leader was Mexico’s President Andrés Manuel López Obrador (aka AMLO).

Weirdly, the NGO did not disclose how many people had actually voted for AMLO, or for any of the other contenders in the poll. This year’s “rogues’ gallery” included Iran’s Supreme Leader Ali Khamenei, Nicaragua’s left-wing President Daniel Ortega, Saudi Arabia’s Crown Prince Mohammad bin Salman, North Korea’s Supreme Leader Kim Jong-Un, Egypt’s brutal strongman, Abdel Fattah El-Sisi, China’s Xi Jinping, and, of course, Vladimir Putin (no list of authoritarian world leaders would be complete without him).

Conspicuously absent from the gallery was Ukrainian President Volodymyr Zelenskyy, who last year banned the activities of most of the country’s opposition parties, led an all-out assault on workers’ rights and is now conducting a fire sale of Ukraine’s most valuable assets. Even before 2022 had begun, the UN Human Rights Council was warning that fundamental freedoms in Ukraine were being “squeezed”. The UN Deputy High Commissioner for Human Rights, Nada Al-Nashif, flagged concerns about “restrictions on the free expression of critical or unpopular opinions, and on participation in peaceful assemblies on sensitive topics, as well as the safety of human rights defenders in Ukraine.”

Yet Zelenskyy didn’t make the cut, for reasons that will become clear later in the article. By contrast, AMLO did. Not only that; he handily saw off all opposition to seize the title. But even as even some of his die-hard opponents will grudgingly admit, he is a curious choice for tyrant, given:

According to Index on Censorship, AMLO is deserving of the title because he…

…has the dubious honour of presiding over the country in which more journalists were killed last year than any other. It is also the country ranked as the most dangerous place to be an environmental defender, according to Global Witness. The number of kidnappings, assaults and arrests under his watch has been huge. Mexico’s climate of impunity makes it possible. López Obrador has also cosied up to the military and Donald Trump and lashed out at women, NGOs and the New York Times.

[Here is a link to the full charge sheet]

So, there you have it: verbally lashing out at the NYT while cosying up to Donald Trump is now the definition of tyranny.

This is not to belittle the charges laid out above. Mexico is indeed a very dangerous place for investigative journalists and environmental campaigners. It has been that way for a very long time though the trend does appear to be worsening. Indeed, as the Mexican news website Animal Politico reported in 2019, the number of cases of aggression against journalists soared 129% during Enrique Peña Nieto’s presidency (2012-18). And as one person noted in the comments section below the Index piece, most of “the violence against journalists in Mexico does not come from the federal government; it is well documented that most cases have to do with local governments and corrupt businesses,” including, of course, narco traficantes.

It is true that AMLO has singled out certain journalists for being “chayateros” — meaning they are on the take from the government of the day or certain businesses. Peña Nieto spent a whopping 60 billion pesos (roughly $3 billion) on advertising in mainstream media outlets and broadcasters while in power.

That said, as NC reader Larry Goldsmith points out below, “there are legitimate criticisms to be made of [AMLO] and his policies, including from the left”, but “he uses most of the time in his two-hour (often more) daily press conferences not addressing those criticisms in any substantive way, but in ad hominem attacks on journalists and people who oppose him.”

Probably the biggest charge that can be laid against AMLO at this point in his tenure is that he is handing too much power to Mexico’s armed forces, especially in public infrastructure projects and policing functions. As Kurt Hackbarth notes in his latest article for Jacobin, on AMLO’s first four years in power, “while AMLO insists that this is to ensure that these projects don’t get privatized in the future, the extremely reductive binomial of ‘privatization-or-military’ is beginning to wear thin — especially on top of the constitutional amendment passed this year to allow the armed forces to continue to perform policing functions for four more years, until 2028.”

So, Who’s Behind Index on Censorship?

Let’s begin at the top. The Index on Censorship’s chief executive is former British MP Ruth Lauren Smeeth, now a member of the House of Lords (under the glamorous title of Baroness Anderson of Stoke on Trent). In her time as MP she played a prominent role in bringing down Corbyn as Labour Party leader. As Hackbarth documents in a viral Twitter thread that was even cited by AMLO himself during his Wednesday morning press conference, “Smeeth-Anderson was one of the most active of the ‘liberals/progressives’ within the Labour party who sought to remove (and destroy) then-party boss, Jeremy Corbyn, accusing him of being anti-Semitic”:

In its documentary series “The Labour Files,” Al Jazeera exposed the lengths and depths to which the Blairite wing of the Labour Party and British pro-Israel groups were willing to go to topple the party’s elected leadership and expel recalcitrant left-wing radicals from the party. But when the documentary was aired in early October, the British media completely ignored it. The media “had little interest in revealing its own role in neutralizing the threat of Corbyn’s Labour to corporate interests,” noted John McGregor in an article for NC.

More important still, Smeeth Anderson appears to have been an asset serving not only pro-Israel British groups such as Friends of Israel but also the US government. Years before entering the House of Commons, she was mentioned in a 2009 US embassy communiqué as a source to “strictly protect”, after she had divulged details of then-PM Gordon Brown’s intentions to call a surprise general election in late 2009.

But the scandal doesn’t end there. As Hackbarth notes, a quick glance at the Index on Censorship’s finances reveals that its donors include the National Endowment for Democracy (NED), a non-profit corporation funded by the US Congress that has served as a largely overt vehicle for US influence and propaganda around the world.

Other notable mentions, as shown in the list below, include the Charles Koch Foundation and George Soros’ Open Society Foundations, representing the two sides of the philanthrocapitalist coin, as well as the European Commission, Google, Facebook and Twitter. The irony is palpable: a non-profit whose stated mission is to defend free expression and combat censorship worldwide accepting funding from three of the companies that, partly at the behest of certain governments, did more than just about any other to censor online information and debate in 2022. 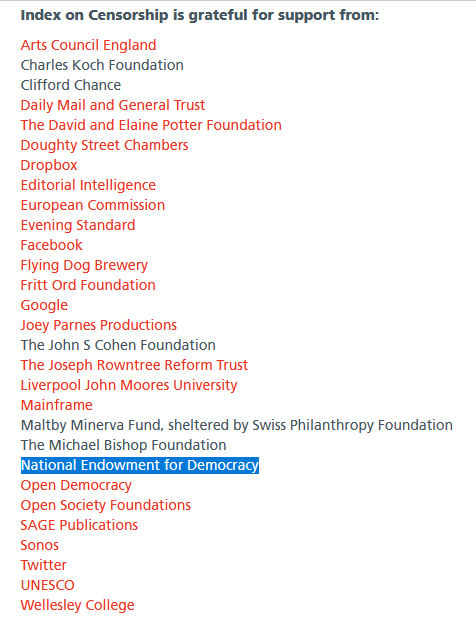 Now, back to NED.

NED’s traditional fields of operation are Latin America, Asia and Eastern Europe — the areas of the world where the US government has been trying to pull off soft coups and colour revolutions for the last 40 years. More recently, it has expanded its activities in the four other “Five-Eye” countries (UK, Canada, Australia and New Zealand), as Declassified UK reported last year:

The NED was “created…to do in the open what the Central Intelligence Agency has done surreptitiously for decades”, the New York Times reported in 1997. That included spending millions of dollars to “support things like political parties, labor unions, dissident movements and the news media in dozens of countries.”

Since the end of the Cold War, the NED has grown and been involved in trying to undermine or remove governments independent of Washington, including democratic ones in Bolivia, Ecuador and Venezuela.

Allen Weinstein, the director of the research study that led to creation of the NED in the 1980s, remarked in 1991: “A lot of what we do today was done covertly 25 years ago by the CIA.”

In AMLO’s Mexico, NED’s activities include funding opposition parties. As the investigative magazine Contralinea reported in June 2021, both the US Agency for International Development (USAID) and the National Endowment for Democracy (NED) have been financing the organization “Mexicans Against Corruption and Impunity” (MCCI). Founded by Claudio X. González Jr, the son of the long-serving president of Kimberley Clark Mexico, the MCCI investigates political corruption.

In response to the revelations, Mexico dispatched a diplomatic note to the US on May 6 asking it to clarify the matter. At his press conference the next morning, AMLO described the US government’s funding of MCCI as a form of golpismo, or coup promotion, and likened it to the participation of US ambassador Henry Wilson in the overthrow of President Francisco Madero during the Mexican Revolution. “It’s an act of interventionism that violates our sovereignty … Our Constitution forbids it. You can’t receive money from another country for political ends.”

In response to the latest scandal, AMLO had the following to say (courtesy of Skwawkbox):

The Index on Censorship’s nomination of AMLO as “Tyrant of 2022” is not the first broadside by a mainstay of the British media establishment against Mexico’s left-leaning president, nor is it likely to be the last. As readers may recall, in 2021 The Economist gave AMLO pride of place on the front cover of its May 29-June 4 edition. Above his picture was the headline “Mexico’s False Messiah.” The accompanying editorial likened him to “authoritarian populists” such as Viktor Orbán of Hungary, Narendra Modi of India and Jair Bolsonaro of Brazil.

Contrast The Economist‘s depiction of AMLO with Time magazine’s near-messianic treatment of his predecessor Enrique Peña Nieto, whose PRI government would end up being one of the most corrupt of modern times. [Peña Nieto, like two other former presidents of Mexico, Carlos Salinas de Gotari and Felipe Calderon, is now a full-time resident of Spain]. 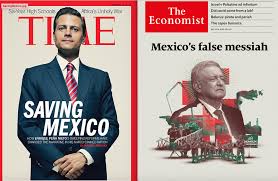 The editorial in The Economist went so far as to urge Mexican voters in each locality to “support whichever opposition party [was] best placed to win” against AMLO’s Morena (Movimiento Regeneración Nacional) party in the mid-term elections, in November ’21. It also urged the US government “to pay attention” to what is happening in its neighbour to the south, as if it wasn’t already.

AMLO responded by describing the article as “propagandistic” and highlighting the arrogance of a British weekly newspaper seeking to advise Mexicans on how to vote in an election:

“These foreign magazines and newspapers dedicated themselves to applauding the neoliberal policies [of past governments]; they’re in favor of privatizations, and they always kept quiet in the face of the corruption that reigned [in Mexico.]… It’s like me going to the United Kingdom and asking the English to vote for my friend [Jeremy] Corbyn of the Labour Party. I can’t do that because that’s a decision for the English. So why don’t they respect [us]?”

Now, AMLO is being targeted by another well-funded, highly connected British institution. As Hackbarth warns, “the same network that destroyed Corbyn and that finances the opposition in Mexico also now seeks to harm AMLO.” The good news, he says, is that they are very clumsy.