On Dec. 19 the Biden administration rolled out its initiative to tackle homelessness in the US. It’s basically a big plan to make a lot of plans, but one thing it doesn’t aim to do anything about? The ongoing private equity and hedge fund takeover of real estate across the country, which is driving up rents, evictions, and homelessness.

First, a reminder of the tragedy that is US homelessness:

A study last year from The Guardian and the University of Washington found that across 73 US cities and counties there were at least 18,000 deaths of people experiencing homelessness over the 2016 to 2020 time period with the number increasing 77 percent over that five-year period. (The federal government makes no effort to count the number of homeless deaths, and many believe the number to be much higher.)

The US Department of Housing and Urban Development 2022 Homeless Report released last month found that 582,462 people were experiencing homelessness on a single night in January 2022 – an 0.3 increase compared to 2020 (the count was postponed in 2021 due to the pandemic). The data also showed a 3.4 percent increase in unsheltered homelessness and a nearly 15 percent increase in chronic homelessness.

Not surprisingly, the US doesn’t have a great way to collect data on the crisis; the number is tallied by volunteers, and it is believed to be a vast undercount. Still, the official numbers show the homeless population increasing steadily since 2016.

The jump in both the number of homeless and number of deaths comes amid the ongoing private equity and hedge fund takeover of real estate across the country. As these firms buy up an increasing amount of shelter, they squeeze them for every last drop of profit – a process that involves more evictions, higher rents, and increased vacancy rates.

Wall Street’s takeover of the American rental market really took off during Obama’s foreclosure regime as the firms snapped up properties (including from many small landlords) at bargain prices. The pace has continued to accelerate. According to ProPublica:

Private equity is now the dominant form of financial backing among the 35 largest owners of multifamily buildings, the analysis showed. In 2011, about a third of the apartment units held by the top owners were backed by private equity. A decade later, half of them were.

Private equity-backed firms in the top 35 cumulatively held roughly a million apartments last year, the analysis showed. That is likely an undercount, because private equity giants like Blackstone, Lone Star Funds and others don’t participate in the National Multifamily Housing Council’s annual survey.

More “innovative” tools are being used by the investment goliaths. Private equity and hedge fund firms use computer algorithms to find houses that would be profitable to turn into rental properties, often snapping them up with cash bids within minutes of a property coming onto the market. And when areas no longer have affordable houses to buy, they can raise rents.

It’s now coming to light that these investment behemoths might also be using algorithms to essentially act as one national landlord cartel that coordinates pricing. Recent lawsuits allege that Texas-based RealPage’s YieldStar software helps landlords set prices for apartments across the US. From one of the lawsuits:

The lawsuit contends that RealPage’s software covers at least 16 million units across the US, and private equity and hedge funds are the main driver behind RealPage’s growth. From ProPublica:

RealPage’s influence was burgeoning. [In 2017], the firm’s target market—multifamily buildings with five or more units—made up about 19 million of the nation’s 45 million rental units. A growing share of those buildings were owned by firms backed by Wall Street investors, who were among the most eager adopters of pricing software.

…Somewhere around 2016, according to one trade group, the industry’s use of the pricing software began to achieve “critical mass.”

Enough properties were now using RealPage’s services, that its pricing algorithm began to take full effect. The time frame coincides with astronomical rental price growth and a resurgence in homelessness numbers and uptick in deaths.

There’s constant media talk of a housing shortage to explain the US homelessness crisis, but according to the lawsuit against RealPage, one of its tactics is also keeping units off the market in order to drive up prices. From the lawsuit:

RealPage allows participating Lessors to coordinate supply levels to avoid price competition. In a competitive market, there are periods where supply exceeds demand, and that in turn puts downward pressure on market prices as firms compete to attract lessees. To avoid the consequences of lawful competition, RealPage provides Lessors with information sufficient to “stagger” lease renewals to avoid oversupply. Lessors thus held vacant rental units unoccupied for periods of time (rejecting the historical adage to keep the “heads in the beds”) to ensure that, collectively, there is not one period in which the market faces an oversupply of residential real estate properties for lease, keeping prices higher.

The property companies began to listen to the algorithm, and the results were predictably higher prices and profits and fewer units available. At least, that’s according to former RealPage CEO Steve Winn:

During an earnings call in 2017, Winn said one large property company, which managed more than 40,000 units, learned it could make more profit by operating at a lower occupancy level that “would have made management uncomfortable before,” he said.

The company had been seeking occupancy levels of 97% or 98% in markets where it was a leader, Winn said. But when it began using YieldStar, managers saw that raising rents and leaving some apartments vacant made more money.

Take the situation in Los Angeles, which has some of the highest rents in the country and biggest homeless populations. According to a recent study from the LA-based housing rights group Strategic Actions for a Just Economy (SAJE), more than 34,000 housing units are simply held off the market (this figure does not include vacation homes or units that have been sold or leased and not yet occupied). The units (typically higher end apartments) are left vacant for speculative reasons and represent enough housing to shelter the majority of the area’s homeless. 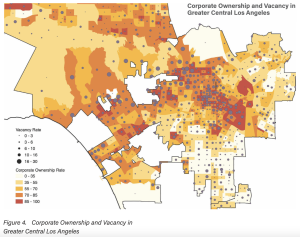 One of RealPage’s pricing software’s main architects is Jeffery Roper who was Alaska Airlines’ Director of Revenue Management when it and other airlines began using common software to share nonpublic planned routes and prices with each other in a price fixing scandal that resulted in overcharging consumers by up to $2 billion. But Roper and other airline executives faced no punishment. In 1994, Clinton’s Justice Department negotiated a settlement with the companies that involved no jail time, fines, or consumer refunds (however, some affected consumers received 10 percent discount coupons for future travel as part of a private lawsuit).

RealPage has denied all the allegations in the lawsuits despite bragging about its software’s effectiveness in accomplishing higher returns for landlords. Again from the lawsuit:

RealPage is proud of its role in the exploding increase in the prices of residential leases. In a marketing video used to attract additional Lessors to the conspiracy, a RealPage Vice President discussed the recent and never-before seen price increases for residential real estate leases, as high as 14.5% in some markets. When another RealPage executive asks: “What role has the [RealPage] software played” in those increases, the RealPage Vice President responded: “I think it’s driving it, quite honestly.”

By tightening its grip on the American rental market, Wall Street has helped cement the idea of a home as a commodity, spurred the assetization of housing, and embedded these assets in the international financial system. And an growing number of smaller landlords have learned to function like the big dogs on Wall Street. According to SAJE:

An increasing share of landlords – even smaller family run operations – now resemble a miniature REIT, managing their investments through professionalized, platformized property management companies, remotely contracting for labor and maintenance, and imposing automated fee and eviction schedules on tenants who fall behind on rents.

Speculative landlords are incentivized to evict tenants by the promise of higher rents, higher sale prices for vacated buildings, or the possibility of just leaving them vacant as the lawsuits against RealPage shows.

A report from the Anti-Eviction Mapping Project focuses on how these technologies are being rolled out and tested in the center of the global landlord tech industry: New York City. The surveillance systems are frequently used to harass and intimidate rent-regulated tenants, speed up evictions, and attract new tenants who see tools like facial recognition as a perk rather than a threat. From the report:

In such poor and working-class housing contexts, tenants rightly interpret the deployment of such systems as intended to “catch” them for minor lease violations, and to squeeze them out, making way for higher-paying tenants and gentrification. As we have found, many of the buildings where landlord tech is being installed for such purposes are situated upon gentrification’s frontlines.

For those who face eviction, the effects can be devastating and long-lasting. An eviction record can trap people in poverty and homelessness as it can force people to miss time from work, lead to drastically increased temporary living costs, and make it harder to find new permanent housing due to background checks. It can lead to or worsen physical and mental health. Pregnant women are more likely to experience birth complications if evicted.

Reliant Safety also displays a number of “case study” videos on their website, showing tenants breaking their leases or the law. Viewers can watch the videos and then learn about how the surveillance was used to either prosecute tenants, charge them for lease violations, or evict them. These are categorized as either: lease violations, criminal activity, insurance claims and liability claims, or narcotics.

Corporate entities that invest in rental housing are the driving force behind the surveillance tech, according to the Anti-Eviction Mapping project report. In one example, tenants tried to organize against the implementation of facial recognition cameras at a property owned by Nelson Management Group, which owns more than 7,500 properties across the five boroughs. According to the report:

The tenants who had been organizing received full color surveillance camera print-outs of them standing in the lobby. Their apartment numbers and timestamps were written on the photos, which were slipped under their apartment doors. They also received accompanying letters asserting their behavior was not allowed and they could be fined for loitering. The tenants were fully within their rights to organize, and this invasive image capture was simply an intimidation technique. Yet this was not the first time that the existing CCTV cameras were used to target tenants. Nelson Management had already used camera footage to financially penalize minor infractions such as “not separating recycling.”

For instance, when landlords license Reliant Safety’s facial recognition systems, they also get access to a Mobile Response Team consisting of former law enforcement officers and military personnel. The team liaises with property management and law enforcement, and provides intelligence from informants via the anonymous Tenant Tips Hotline, along with video footage.

With so much money at stake, one can only imagine imagine how such arrangements could be abused to lead to arrests, evictions, or worse. Recall that the home invasion and killing of Breona Taylor by Louisville police in 2020 was linked to plans to clear the neighborhood and speed up a major redevelopment plan.

Speaking of a lot of money at stake, according to OpenSecrets, members of Congress invest more cash in real estate than any other industry, which has been true every year since 2008 when the research group first began tracking Congressmembers’ investments.

No doubt they’re pleased by the returns.