Yves here. Urban dwellers due to their limited contact with nature, are less afflicted by animal nuisances, with rats and pigeons as exceptions. However, given that focus, this post omits some favorites, like geese and invasive species such as rabbits in Australia.

Animals routinely try to steal food from their fellows or other species; it’s easier to pilfer than forage. But some of the beastly offenses have nothing to do with our survival but our sense of order, like pigeons pooping and deer eating flower gardens. The author argues for accommodation strategies but she seems to overestimate the effectiveness of some of them. For instance, the only time I was in a car that nearly hit a deer, we were driving at dusk and only 25 miles an hour; a doe and two fawns bounded across a narrow country road at dusk. Similarly, my brother was not driving quickly when he just missed an unfortunate encounter with a moose.

By Rachel Nuwer, a science journalist whose writing has appeared in The New York Times, National Geographic, Scientific American, BBC Future, and elsewhere. She is the author of “Poached: Inside the Dark World of Wildlife Trafficking.” Originally published at Undark

Lots of people find squirrels to be charming and adorable. Science journalist Bethany Brookshire is not one of them. For her, squirrels — in particular, one exceptionally wily individual she calls Kevin — are the bane of her gardening endeavors. Chicken wire, pepper spray, and cats have all proven to be no match for Kevin, who always finds a way to outmaneuver Brookshire’s futile attempts to keep him away from her cherry tomatoes.

Google the definition of a pest, and Kevin fits the bill: “a destructive insect or animal that attacks crops, food, livestock, etc.” But Brookshire acknowledges that not everyone shares her views on Kevin and his kind. Whether or not squirrels are regarded as “cute or a curse” is in the eye of the beholder, Brookshire writes in “Pests: How Humans Create Animal Villains.” “Pest is all about perspective,” she says. 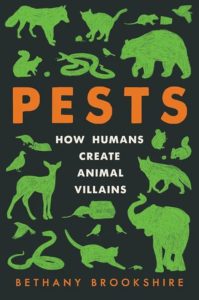 Brookshire unpacks our complex relationships with some of the world’s most irksome and irritating creatures: Those that usually do not directly harm us, but that invade our space and “harm our stuff,” as she puts it. Inspired by encounters with Kevin and other animals —­­ from aggressive turkeys to Froot Loop-loving lab mice — “Pests” is Brookshire’s attempt to “find out why we call some animals pests, and some not.”

Brookshire focuses on 10 vertebrate species that are generally regarded as pests, including deer in suburban backyards in Georgia, pythons in wetlands in Florida, and sparrows in crop fields in China. In case after case, she finds the reasoning behind the “pest” label to be wildly subjective, determined by culture, context, and personal preference.

Most important, Brookshire found that no matter the animal in question, pests are of our own making. This is because humanity’s vast impact on the planet has left many species with two choices, she writes: “adjust or die.” Pests, oftentimes, are simply the species that have managed to adapt and “piggyback on our successes to thrive,” as one of Brookshire’s sources told her. In some cases, Brookshire writes, the “sheer adaptability and persistence” demonstrated by these creatures — especially in light of all we do to try to eradicate them — is worthy of awe.

Take rats. While “it often seems as though wherever people are, rats are too,” Brookshire writes, that was not always the case. Black rats began hitching rides with people out of their native India about 5,000 years ago, spreading to Mesopotamia, on to the Mediterranean, and then around the Roman Empire. Human infrastructure was key to the rats’ eventual global domination, especially the endless spew of sewage and garbage that people produce wherever we settle down, Brookshire writes. Thousands of years later, this is still the case in cities around the world. New York City, for example, has tried everything from poison to carbon dioxide gas to rid itself of rats, but to no avail. Until the city changes the way it manages its waste, “the rats will come back, again and again,” Brookshire writes. Any disgust we feel for rats, then, is just a reflection of our own disgusting ways.

While rats have always been unwelcome urban guests, pigeons — derisively referred to by today’s city dwellers as rats with wings — were actually originally brought to people’s homes (usually on their roofs, that is) on purpose. Pigeons were one of the first birds to be domesticated around 5,000 years ago, and they were valued for millennia for their meat and their ability to carry messages. Europeans brought pigeons with them to North America, where they bred the birds for fanciful looks, competed them in races, and hunted them for sport.

Some pigeons inevitably escaped their coops, however, and as their urban populations began to build, enthusiasm for them (and their ever-present poop) began to wane. Pigeon intolerance accelerated as farm-raised chicken replaced home-harvested squab in kitchens, removing the need for people to raise pigeons themselves for food. Telegraphs and telephones supplanted messenger pigeons as well, further accelerating the bird’s fall from favor.

By the 1940s, pigeons in New York City were being poisoned and accused of spreading disease. But like rats, they proved impossible to eradicate. The skills people had purposefully cultivated in the pigeons they formerly bred — the ability to forage on their own and a strong tolerance of humans — permitted the birds’ survival in cities, as did the ready availability of discarded human food. Some people today also purposefully feed and befriend pigeons — an affinity that harkens back to the fact that the birds “strutting the streets today” are descendants of cherished individuals that “people valued very much,” Brookshire points out. 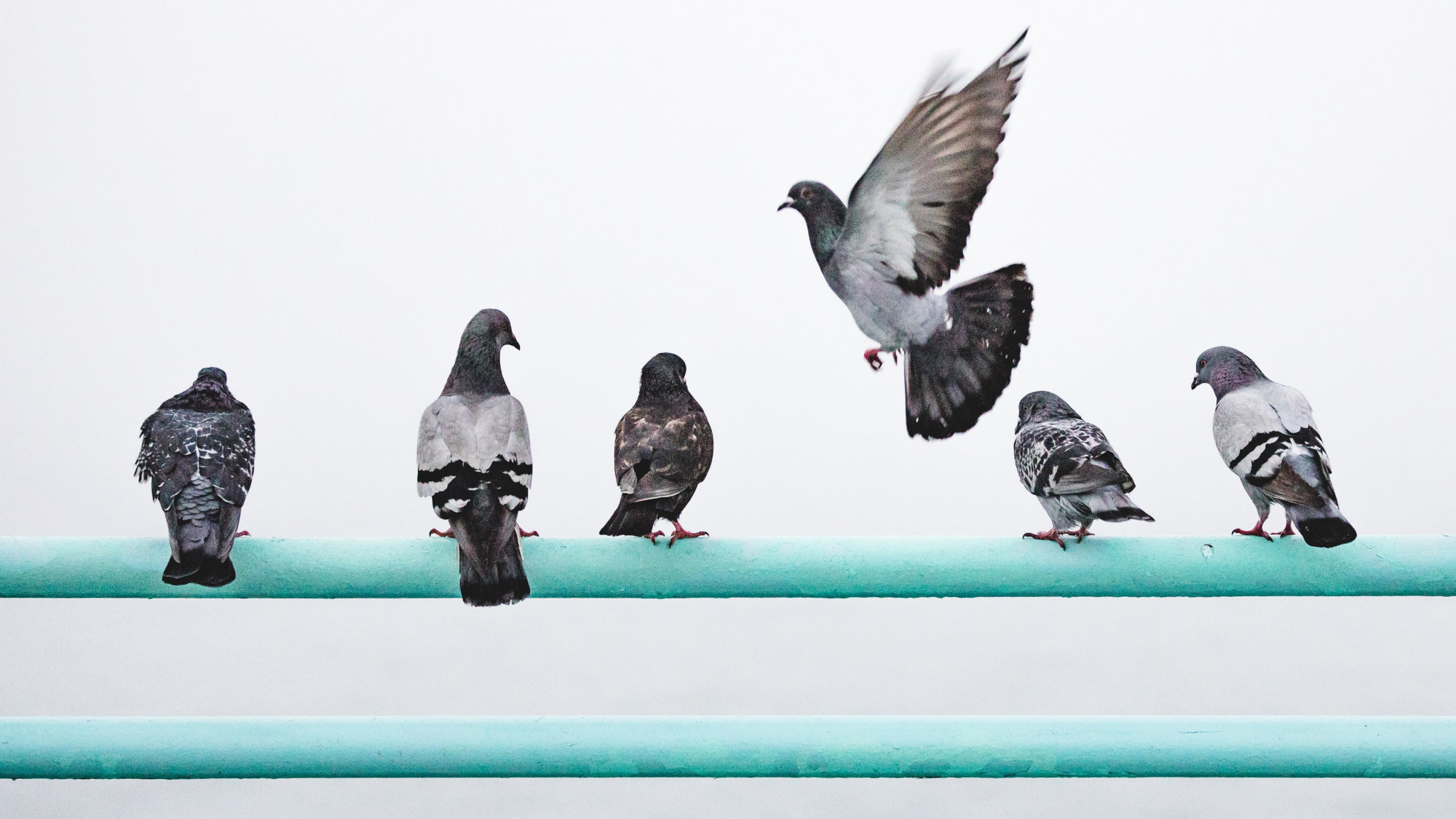 Before the convenience of farm-raised chicken, pigeons were raised at home for food. Visual: Nathan Dumlao/Unsplash

Cats are also considered to be pests in certain circumstances. “As humans wreak their own havoc on local biodiversity, the cats associated with them do the same,” Brookshire writes. “Invasive pest? Or homeless pet?” Brookshire muses. “Both of these can be true, at the same time and even in the same place.”

By one estimate, feral, stray, and outdoor cats kill up to 4 billion birds and as many as 22 billion mammals each year in the United States alone, Brookshire reports. In some locations — especially islands like Australia with vulnerable wildlife — feral cats, originally brought to the island by colonists, are regularly shot, poisoned, or trapped for euthanasia. Other humanely intentioned efforts, like reintroducing sterilized feral cats into the wild, have also proven by-and-large ineffective and impractical on a large scale. (Brookshire points out that such efforts may be enough to protect wildlife in some specific circumstances.)

There is no simple solution to the problem of how to limit the impact of feral cats, nor is there agreement about whether pet cats should be allowed to roam free. What is certain is that cat-related wildlife killings and extinctions “are really our fault,” Brookshire writes. Engaging cat owners in conversation about the problem rather than lecturing them, and giving them scientifically proven tips for reducing cat predation — things as simple as playing with a cat for 10 minutes a day and feeding them a high-protein diet — could go a long way toward reducing cat predation, Brookshire writes.

Across these and other case studies, Brookshire confirms her original hypothesis that what makes a pest is essentially a reflection of our own biases, preferences, and insecurities. By the end of the book, she argues that we should get rid of the “pest” label entirely. “Our reactions to the animals in our lives are often a wild seesaw of deadly conflict and cooing compassion,” she points out.

So Brookshire calls for readers to “escape this mental mousetrap” by learning a bit about the animals they encounter in places they’d rather not see them (like a basement, cupboard, trash can, or garden), and considering what factors lead them to being there in the first place. This includes understanding, for example, the differences between mice and rats, coyotes and bears, or pigeons and sparrows, including what each species likes to eat and where they like to live, and how our human habits and habitats might compel them to establish their lives in parallel to our own. “Only by understanding the animals around us, by learning what attracts them and what repels them, can we live with them, instead of against them,” Brookshire concludes.

And we might consider strategies like better trash cans to keep bears, coyotes, and rodents out; driving slower at night to prevent slamming into deer; and even adding invasive and “pest” species to our diet.

Regardless of the solutions, though, respecting animals is a first step toward building tolerance and moving toward coexistence. While this is not a new idea — Brookshire points out that many Indigenous groups have adhered to principles of coexistence with wildlife for millennia, and continue to view their interactions with nature and other species through this lens — it’s one that Westerners are, fortunately, increasingly coming around to. As Brookshire writes: “People are realizing that the way we view ourselves, and our relationship to where we live, isn’t the only way — or the best one.”