That’s what Lewis Ranieri, who can lay claim to founding the mortgage-backed securities market, said in presentation at a Milken Institute conference last week. He asserted that 50% of the subprime borrowers qualified for loans from the FHA, Freddie Mac, or Fannie Mae on much more favorable terms.

Tanta at Calculated Risk looks to see whether the available data support Ranieri’s view. She does find some evidence that a significant number of subprime borrowers had loan terms that would have qualified them for at least an Alt-A loan, perhaps even prime. But it is hard to be definitive about the proportion:

1. We looked at this chart a couple of weeks ago. It doesn’t, of course, give all of the loan-level characteristics you would need in order to say for certain that some of these loans are “over-qualified” for a subprime program, but it is certainly not inconsistent with that idea. Note that it is referring to original CLTV and FICO, not current. 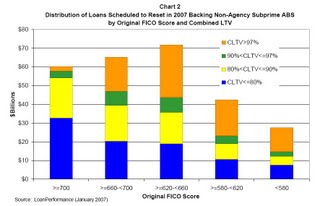 2. We also looked at this chart from Fitch on subprime loans that experienced first-year defaults, versus the ones that survived the first year. If you assume that most of the specuvestors, flippers, and outright frauds are in the former category, let’s focus on the second half of the chart. One thing it implies to me is that average FICOs are improving, over time, in these subprime pools. Certainly, if you posited that there are actually individual loans that resemble the average loan, you would have to wonder why a conforming-dollar 625 FICO 80/85 LTV/CLTV full doc that isn’t in CA couldn’t qualify for a GSE or FHA loan. You do have to ask why those average FICOs in subprime pools are improving over the vintages. Of course it is not clear from looking at averages like this whether the best loans in these pools are getting near-prime interest rates or not, but you still have an average coupon here that is significantly higher than an average prime coupon….The data we’re looking at here cannot decide these questions, but it is not inconsistent, as far as I can see, with the hypothesis that “steering down” is going on.

3. This is an excerpt from Fannie Mae CEO Daniel Mudd’s testimony before congress:

Right now, we’re getting at least 15,000 applications for subprime refinancing coming into our system per month. Because we have been adhering to our own prudent standards throughout, even before our new enhancements, 80 percent got a “yes.” Altogether, we estimate that about 1.5 million homeowners who face resetting ARMs and potential payment shock this year and next could be eligible for our loan options. Certainly, lenders may choose someone else to buy or securitize the loans, but 1.5 million would be eligible for our options; we think this will also help establish a benchmark in the market for safe loans. These are also good alternatives for first-time homebuyers as the riskier “affordability” loans dry up.

Now, you can say any number of things about this, including wondering out loud how choosy Fannie is being lately; that’s fair enough. I will simply observe that no loan ever gets a “yes” if it’s a jumbo, remember, so we are not talking about the highest-balance loans in the bubble markets. Nor are we necessarily talking about “prime,” here. Fannie Mae has a near-prime/better-than-average subprime program called “Expanded Approval” which will accept some of these loans with a healthy, but not outrageous, increase in the interest rate. My own experience with Expanded Approval tells me that the hypothetical conforming-dollar 625 FICO 80/85 LTV/CLTV full doc that isn’t in CA is a loan it would love. But this isn’t just a risk-shift out of a subprime pool into a Fannie Mae pool, since Fannie will not accept toxic loan terms in the Expanded Approval program. These loans are overwhelmingly fixed-rate, with some longer-initial-period hybrid ARMs (5/1 or 7/1) that amortize and don’t have deep teasers.

It remains to be established, as far as I’m concerned, that there is a substantial number of loans which are in trouble only because they received toxic terms or predatory interest rates up front, and that would become reperforming if they were modified or refinanced down to a more reasonable rate and more stable terms. However, I can’t say that I’ve seen any hard evidence lately that is inconsistent with this idea….