Fitch was warning of lax lending practices in commercial real estate in the US starting in April of last year. The typical pattern, of going from unduly generous terms to stringent ones, with nary a stop in between, is occurring now, and with a vengeance.

By happenstance, I had dinner with a colleague whose family manages a large number of commercial buildings in one of the biggest US cities. He says the number of defaults in rentals that they are seeing, including tenants disappearing in the night, is markedly worse than during the real estate downturn of the early 1990s. And we aren’t even in a full blown economic downturn yet. This deterioration in cash flow will make banks even more leery of lending.

Meanwhile, out in the nonpolitical world (although everything is political these days), the new Federal Reserve senior loan officer survey shows an incredible credit crunch in progress — worse than the crunches following the S&L crisis, worse than the brief crunch when LTCM blew up, worse than the dotcom bust. This is pretty grim. 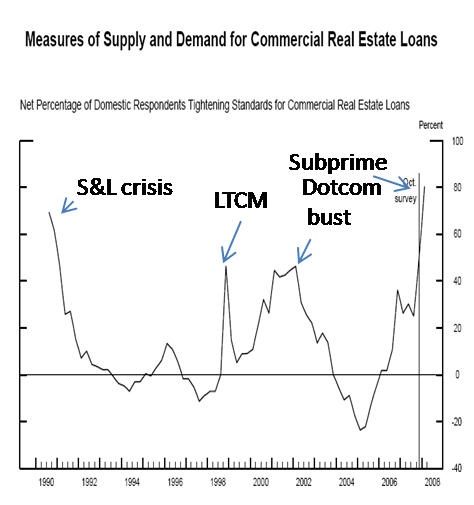 The January survey offers the hardest evidence yet that the credit crunch is spreading. Although banks also reported some tightening of lending requirements on credit cards and other consumer loans, commercial and industrial loans have been the most severely affected.

One-third of the U.S. banks and about two-thirds of the foreign banks responding told the Fed they had tightened lending standards on commercial and industrial loans during the three months ended Jan. 31. About half the banks said they have widened the spread between their cost of funds and what they are charging borrowers….

About a third of the banks participating in the survey reported weaker demand for commercial and industrial loans, while about one in 10 reported strong demand. Among those that saw a reduced appetite for loans, “a decrease in customers’ needs to finance inventories and investment in plant and equipment” was cited frequently. Additionally, 70% of the respondents cited a drop in businesses’ needs for merger-and-acquisition financing as a reason for lower demand….

“The easy credit has gone away,” Mr. Knowles said. “Everything is scrutinized to a higher degree now.”

The survey also found that 80% of U.S. banks tightened terms on commercial real-estate loans during the period, the highest percentage since the survey question was introduced in 1990; almost half of banks also reported weaker demand for those loans.