James Hamilton, in “Asking too much of monetary policy,” is trying to talk sense to a Fed that just doesn’t get it.

Hamilton ought to have some cred; he proved to be remarkably prescient when he warned in his presentation at the Fed’s Jackson Hole conference of the danger of the markets playing chicken with the government on the issue of Freddie’s and Fannie’s implicit government guarantee. He said the markets would play a game of chicken and test the government’s willingness to stand behind the GSEs. He further observed that the US would capitulate and the Fed would be the party that would come to the agencies’ rescue.

Hamilton is now alarmed about the Fed’s recklessness as far as inflation is concerned. He argues that the Fed cannot provide enough monetary stimulus to shore up a fall in housing prices as severe as the one we are suffering now, particularly since the basis for the decline is insolvency, not illiquidity. He also notes that the Fed has stepped to the fore and unwisely taken responsibility for a problem it cannot solve.

The Fed is simply too small an actor, relative to the global banking system, to have enough impact. Consider: one analyst observed that with its new programs (the new $100 billion repo facility and the $200 billion Treasuries-for-MBS facility), the Fed had just creates a $300 billion bank overnight. True enough, but consider: Citigroup’s balance sheet has $2.2 trillion in assets. Steve Waldman estimates that the Fed can take deploy another $300 to $400 billion to similar operations. It can take one more big shot at this problem (ex monetary moves, which Hamilton deems ineffective) before it has used up all its powder.

Here’s another way of looking at the problem. This analysis (in a presentation sent by reader Scott) started with a base case of a borrower earning $40,403 in pre-tax income in June 2007 (this was arrived at by starting with a $30,000 income in 1995, compounding it forward for inflation, and then using prevailing mortgage terms to see how much it yielded in buying power. With an interest only loan, a 60% debt to income ratio, a 6.75% non-agency mortgage rate, and no equity, the borrower could afford a home up to $359,139.

This is what you get when you deflate that back to the more realistic terms on offer now (note the income has been compounded forward). Click to enlarge: 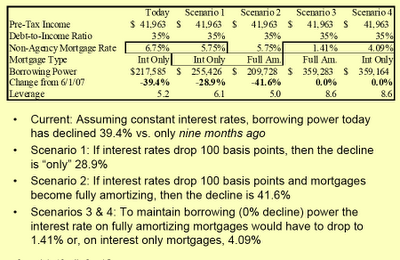 It seems odd that the Fed is impervious to inflation risk (or the mere fact that a steepening yield curve, which is what too much cutting on the short end produces, neuters its policies). It may be subject to a phenomenon called incestuous amplification, which was defined in Jane’s Defense Weekly as:

a condition in warfare where one only listens to those who are already in lock-step agreement, reinforcing set beliefs and creating a situation ripe for miscalculation.

I remember a Federal Reserve economist once recounting a conversation with his young daughter, who asked him, “What do you do at work, Daddy?” He answered, “I help make important decisions.” “What kind of decisions, Daddy?” “Oh, things like how much money the government needs to print.”

Which is an important decision, don’t get me wrong. By creating too little money, a nation’s central bank has the power to generate sustained deflation (a fall in the price level), such as the U.S. Federal Reserve did in 1931-33, greatly aggravating the Great Depression, or the Bank of Japan permitted in the late 1990s, undoubtedly prolonging the economic misery of that episode. These were outrageous policy errors, but ones that I am extremely confident that the well-trained fathers and mothers currently employed by the Federal Reserve System would never allow the United States to repeat.

The central bank also unquestionably has the power, by printing too much money, to create ferocious inflation– just ask Gideon Gono, head of the central bank of Zimbabwe.

I happen to be among those macroeconomists who further believe that the Fed can do a great deal more than just cause too much deflation or inflation. The choice for the time path of money creation ultimately determines the time path of short-term nominal interest rates, and indeed the modern Federal Reserve quite appropriately conceives of its primary operating decision as basically choosing the current value for the overnight interbank interest rate, known as the fed funds rate. I would readily agree that careful exercise of this choice could help mitigate– though in my opinion, not entirely eliminate– the ups and downs of real economic activity associated with the business cycle.

I would also quickly point out that an injudicious choice for the short-term interest rate has the potential to exacerbate those ups and downs. Not just the potential, I dare say, but in practice has often been observed to exert exactly that effect. The cycle is an extremely familiar one. The Fed, frustrated by the low level of economic activity, tries to engender an artificial boom through lower interest rates, only to discover soon afterward that this has created more inflation than the public is willing to tolerate. The Fed then has no option other than contract to try to bring inflation back down. But that contraction in turn may prove to be one factor contributing to the next downturn, to which the central bank wants to respond with yet another stimulus. In my opinion, this same pattern has been repeated many, many times in U.S. history, most recently with a Fed that was too expansionary in 2003-2004, which caused the Fed to have to contract in 2006, and that policy-induced boom-bust cycle is part– though in my opinion, only part– of the cause of the problem we find ourselves in today.

So, I am certainly a believer in the potential real effects, sometimes for good, sometimes for ill, of monetary policy. But I just as certainly do not believe, nor should any reasonable person believe, that no matter what the economic problem might be, you can always solve it just by printing more money.

What’s an example of a problem you can’t solve with monetary policy? Suppose you were convinced that house prices in the United States were at the moment substantially higher than they should be relative to the price of other goods and services. How could that have happened, an economist would want to ask, and let’s suppose that the answer is that a credit market profoundly distorted by moral hazard problems loaned vast sums to households that could not reasonably be expected to be repaid if real estate prices stopped rising. The purchase of the properties financed by those loans drove up the price of housing relative to what it would have been (and should have been) with a correctly functioning credit market, so now the relative price of housing must fall.

And why doesn’t the price fall instantly to the appropriate equilibrium value now that these problems are fully revealed, an economist would then reasonably inquire? To which the answer might be, home sellers reduce prices only gradually in a down market, as a consequence of which further price declines are presently quite predictable, as are the additional new defaults that would result from those price declines, as are the consequences of those yet-to-be foreclosed homes coming back for resale onto the market.

The problem then is many hundreds of billions of dollars in loans that are not going to be repaid, the prospect of whose default could completely freeze the market for credit.

That, it seems to me, is a problem you can’t solve by lowering the fed funds rate. Even if the nominal yield on Tbills were driven all the way to zero, the same is never going to happen to the risky long-term housing loans we’re discussing, nor to the rates charged for loans to the financial institutions exposed to the underlying default risk. And even if you could successfully engineer a further reduction in the nominal interest rate charged to home buyers, if the expected real estate price depreciation is large, that would dwarf the effect of the nominal interest rate itself in terms of the attractiveness to a buyer contemplating purchasing a home at today’s prices.

You could in principle solve the problem of overvalued house prices by printing so much money that you bring the price of everything else up to that of housing, generating the necessary adjustment in the relative price of housing without going through the painful cycle of bankruptcies and foreclosures. Whether that is an action you’d want to contemplate might depend on the magnitude of the price adjustment you think is necessary. If we are talking about just 1 or 2% more inflation, I personally would regard the inflation as worth it. But if house prices are today overvalued by 10-30%, for which our proposed remedy is to bring about a corresponding increase in the price of everything else of that magnitude, we would surely want to bear in mind the recent caution from Federal Reserve Governor Frederic Mishkin:

Now, reasonable people can and do differ on how likely it is that further Fed rate cuts would help mitigate the current problems. You might reasonably argue that even if the chance of success is small, the cost of letting the economy slip into the cascading defaults that a further 20% decline in real estate prices would precipitate is so large that it’s worth trying anything.

And perhaps it is. But I would nevertheless caution that we need to be open to the possibility that no matter how low the Fed brings its target rate, it may not arrest the unfolding financial disaster. Unless the intention is to go all the way with enough inflation to avert the defaults, that means we need an exit strategy– some point at which we all admit that further monetary stimulus is doing nothing more than generating inflation, and at which point we acknowledge that the goal for monetary policy is no longer the heroic objective of making bad loans become good, but instead the more modest but also more attainable objective of making sure that fluctuations in the purchasing power of a dollar are not themselves a separate destabilizing influence.

I am worried that everyone now seems to be looking to the Federal Reserve for a solution, and the Fed seems to be signaling that it is going to provide one.